I love road trips – that’s probably obvious – I mean I blog about restaurants, recipes and um ROAD TRIPS! Recently I was offered the chance to stay at a cabin in Somerset, KY (near Cumberland Falls) so off we went! 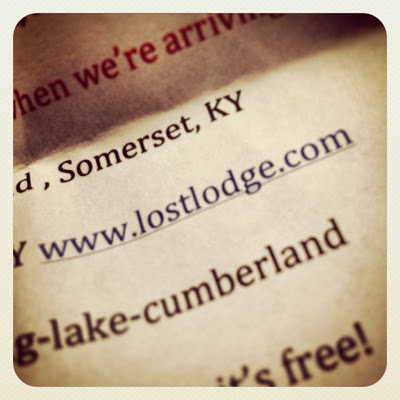 Lost Lodge is in a great spot – it’s “in town” but tucked away – it’s also between Lake Cumberland and Cumberland Falls – like I said – a great spot! After social media-ing this photo over the interwebs I found out my friend (and fellow blogger) Shannan also is a fan of Lost Lodge! 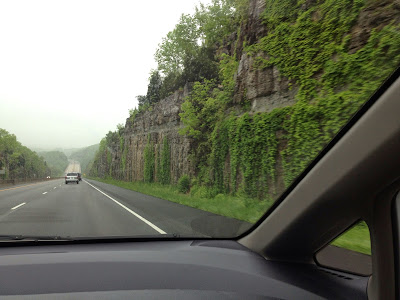 The drive down is pretty – just seeing all the rock walls covered in vegetation and mini-waterfalls. Good stuff. 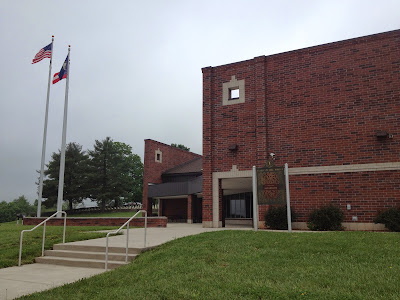 I like to plan stops along the way and Larry really likes history so we stopped at the Mill Springs Battlefield in Nancy, KY. It’s a small museum but they have a lot of information as well as a free driving tour guide. 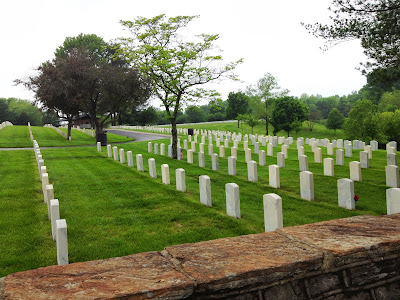 Turns out the Mill Springs Battle was a very pivotal battle won by the Union. The cemetery near the museum is an overall military cemetery. I always find the rows of headstones a bit haunting and yet beautiful. 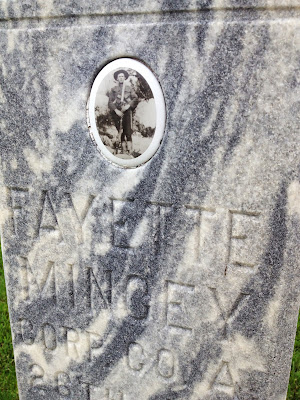 Then we came across two beautiful headstones with photos on them. Upon reading them, it turns out the two young men 19 and 21 – died just 3 days apart.

After exploring this a bit we headed out on the driving tour to check out a few stops. 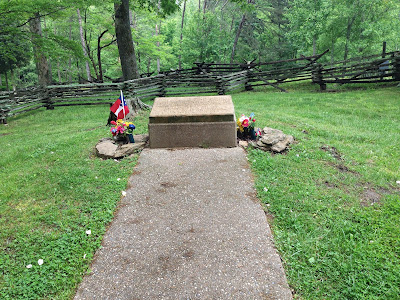 This was an actual battlefield where hundreds of Confederate soldiers lost their lives. They left in such a hurry and buried them very quickly that within a few days the dead were coming back up out of the ground. The townspeople actually had to gather up the men and re-bury them. (Ugh – imagine that town hall meeting.) They buried them all in a mound and then put a memorial on the site.

They also have a trail that you can walk around explaining the area and the sites of the battlefield. It’s a hilly farm area now – but with their help – you can really put yourself in the battle and see how screwed they really were! 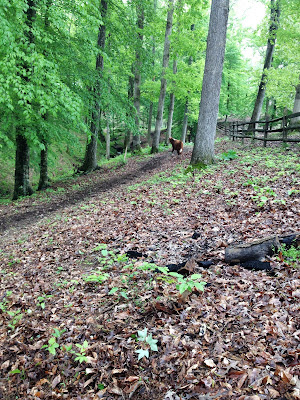 While on the trail – we came across an unexpected guest. Yes – a cow. A teenaged cow at that. I was a bit worried that his Dad might be nearby and we might be in for a little more “adventure” than we had bargained for. 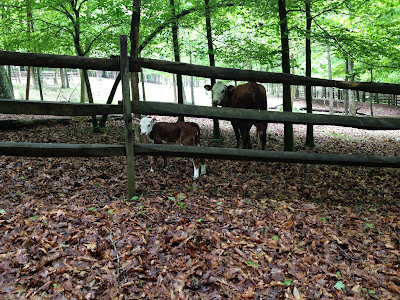 We did find his mom and little brother…but thankfully – no Dad! 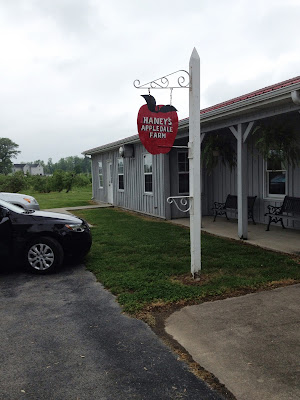 We still had a little time before heading to the lodge so we stopped at Haney’s Appledale Farm. We knew there weren’t any apples out yet – but it was worth the stop. 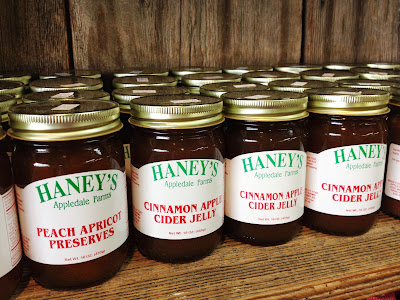 They have a wide range of jams and preserves – all made on the premises. 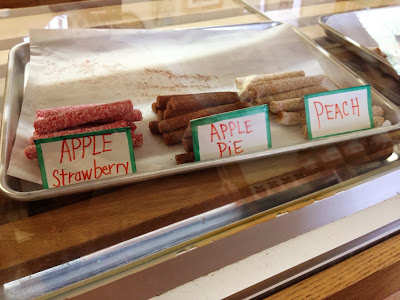 Then we found these – imagine a fruit roll up that’s actually made from – wait for it – fruit!!! These little fruit sticks are basically fruit & sugar cooked down and then rolled in coconut. Larry said they were really unique and it actually took a minute to get accustomed to the texture – but the fruit flavor was good and actually natural! 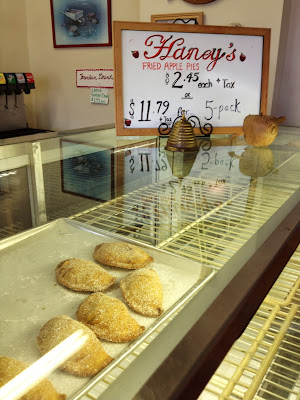 I went another route and went straight for the hand pie! At $2.45 each – this was a bargain and a delightful dessert! 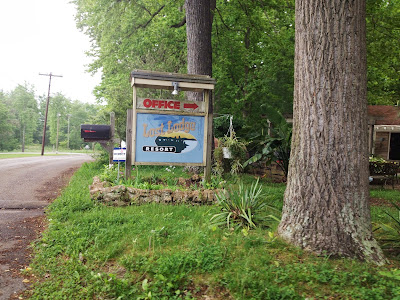 But then it was time to take the short drive to Somerset and find our cabin! 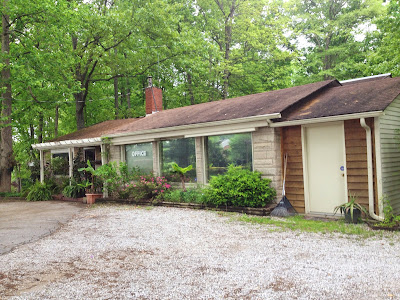 Lost Lodge is tucked off the main strip and is a secret hideaway with probably 20 cabins surrounded by woods. We were there a bit before the heavy season begins (Memorial Day) so we were the only renters that weekend. 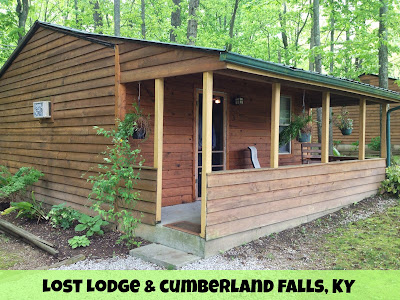 We had a one bedoom cabin that faced the road. It wasn’t big but it was perfect for the two of us. There’s a nice porch on the front for us to relax and hang out on. 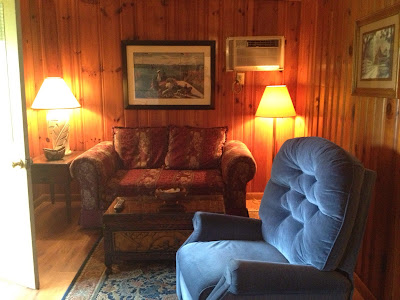 There’s a small living room with a loveseat and recliner. The furniture is very clean and comfortable. 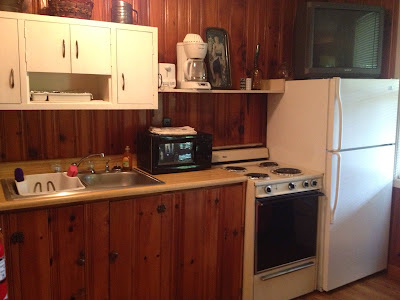 The kitchen is on the other half of that room with a stove, fridge and microwave. The cabins have silverware, dishes and pots/pans. The bathroom has a shower/tub and provides towels. The bedroom was small but had an extremely comfortable double bed. 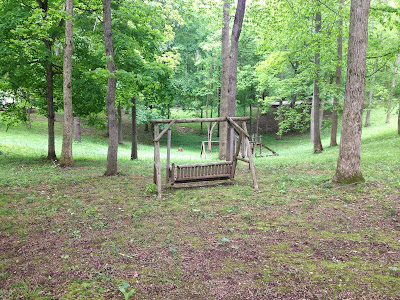 Out back was a really nice park with swings, fire pits and picnic tables. Other cabins have decks and more space as well. 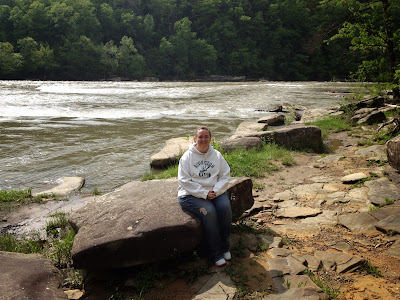 After exploring our cabin, we headed to Cumberland Falls. We were walking along and found a nice spot for a picture so I handed the camera over to Larry. 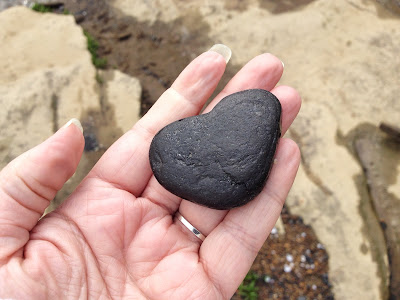 And as we were walking there were a lot of broken up pieces of coal in the water and on the ground – then Larry spotted this one. We had to take that home with us…a heart for the two of us to remember the trip by. 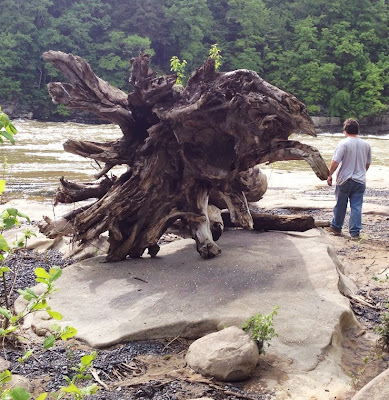 We saw this ginormous piece of driftwood too – so cool! 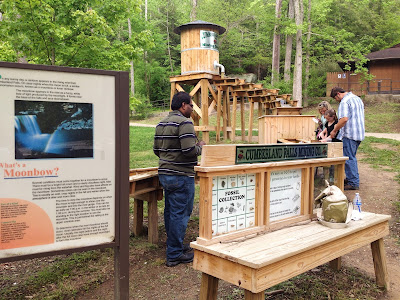 If you’ve got kids – there’s a mining camp for you to get some rocks and put them through all the screens and levels like the real gold miners had to do to make some money. 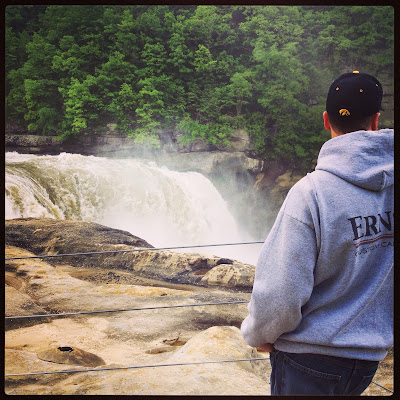 Then it was up to the falls! They are really pretty. We’ve been to Niagara Falls and this is a lot smaller but kind of cooler because you’re so much closer. 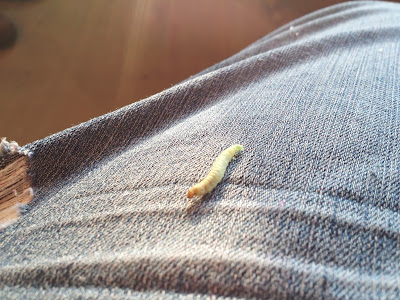 Back at the cabin, we found a little wildlife outside… 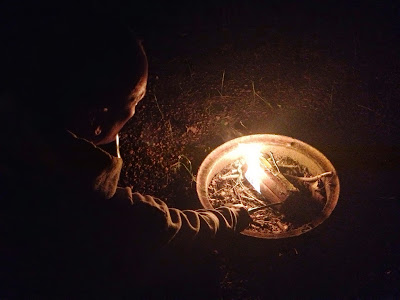 And then decided to start a fire… if you head to Lost Lodge – be sure to pack your camping chairs – they don’t have any chairs for the fire pits. 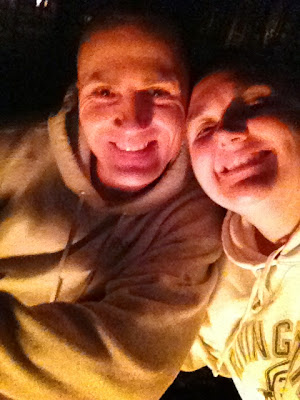 And there we are – smiling and having a blast by the fire. 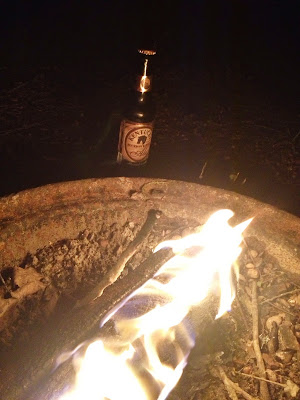 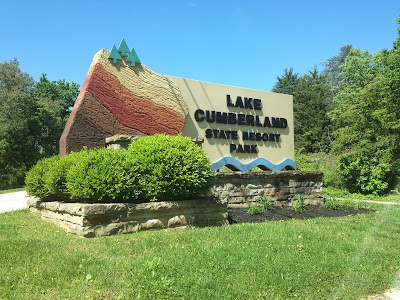 The next morning – we decided to check out Lake Cumberland since we were so close. They have a ton of boat rental places – we just didn’t have the time/money for that this weekend. 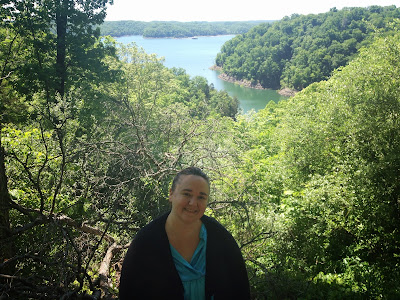 And one last shot of Lake Cumberland for the road.
We really enjoyed the Lost Lodge and the Cumberland area. It’s about 3 hours south of Cincinnati – so not bad for a weekend trip and there are a lot of outdoor activities to do in the area.
Thanks again so much to Nancy at Lost Lodge – she was a great host!
The other thing to note about Lost Lodge is how accessible and affordable they are! Cabins start at under $100/night! I’ve done a lot of research about cabins and that’s a good deal! They also realize that money is tight these days and have a whole page with tips and tricks on how to come to the area and have fun on a budget! Their website is really helpful too with a big list of things to do in the area – it was like the one-stop-shop for Cumberland!
Pin
Share
Tweet
Share
Previous Post: « Taco Truck Tour in Columbus
Next Post: Kentucky Bourbon Trail: Maker’s Mark – Loretto, KY »