Subscribe
Monday I shared my fun times at the Inn & Spa at Cedar Falls – well today – we’re going back but we’re talking about the food!!! 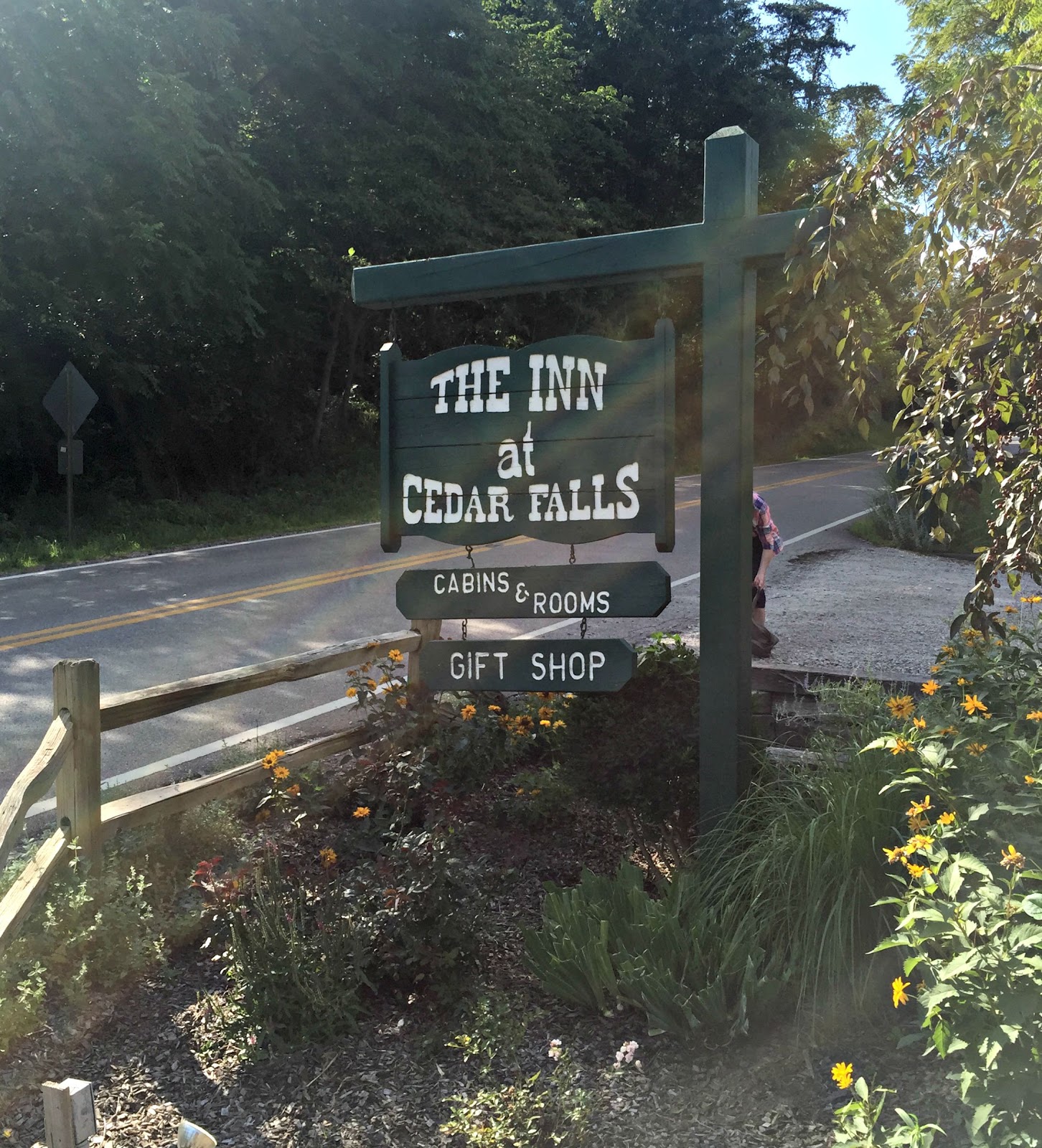 The Inn at Cedar Falls is the first of the cabins/cottages to be built and commercialized in Hocking Hills. What I loved about the Inn was that you could literally go to the property and never leave and still have a great time!

Beyond the inn, the gardens, the fire pit, the gift shop, the spa – there’s also a restaurant! It’s called Kindred Spirits. 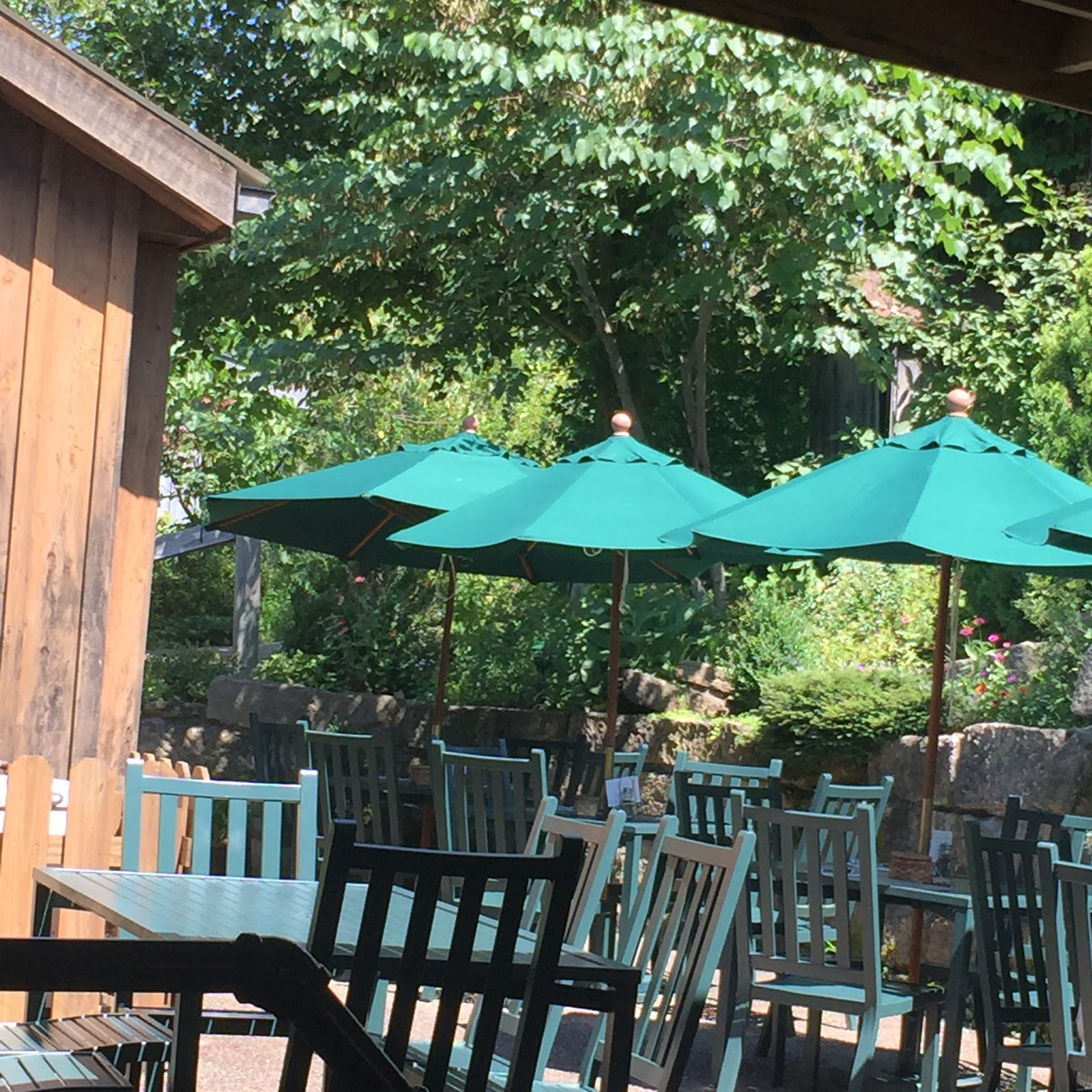 There’s a great patio out back with a covered area as well as tables with umbrellas. It’s SUPER peaceful back there – I loved it! 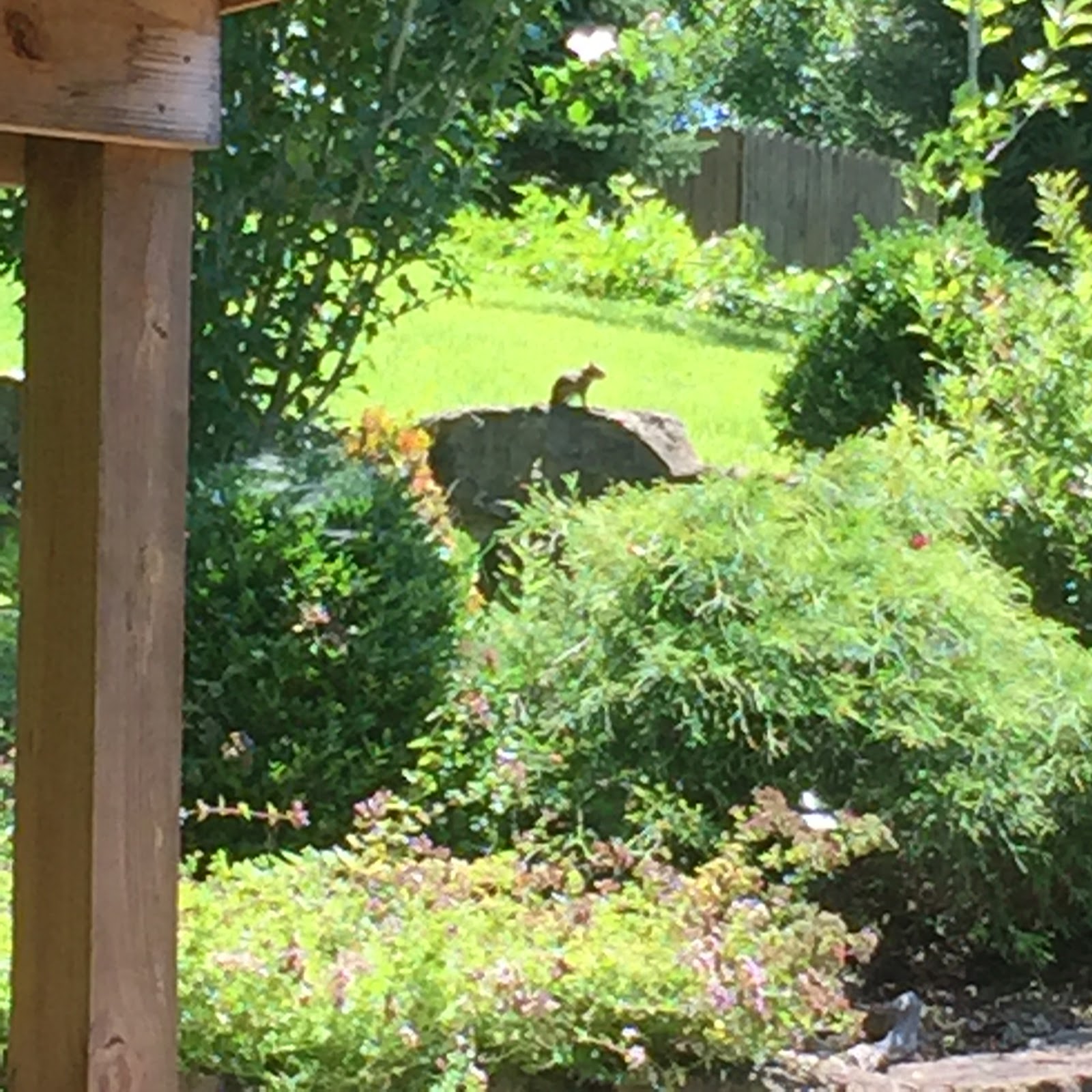 You might also see a friend or two while you’re having breakfast, lunch or dinner! (I love that they serve all 3 meals – there’s not a lot of food options close to the caves and this is really good – as you’ll see!) 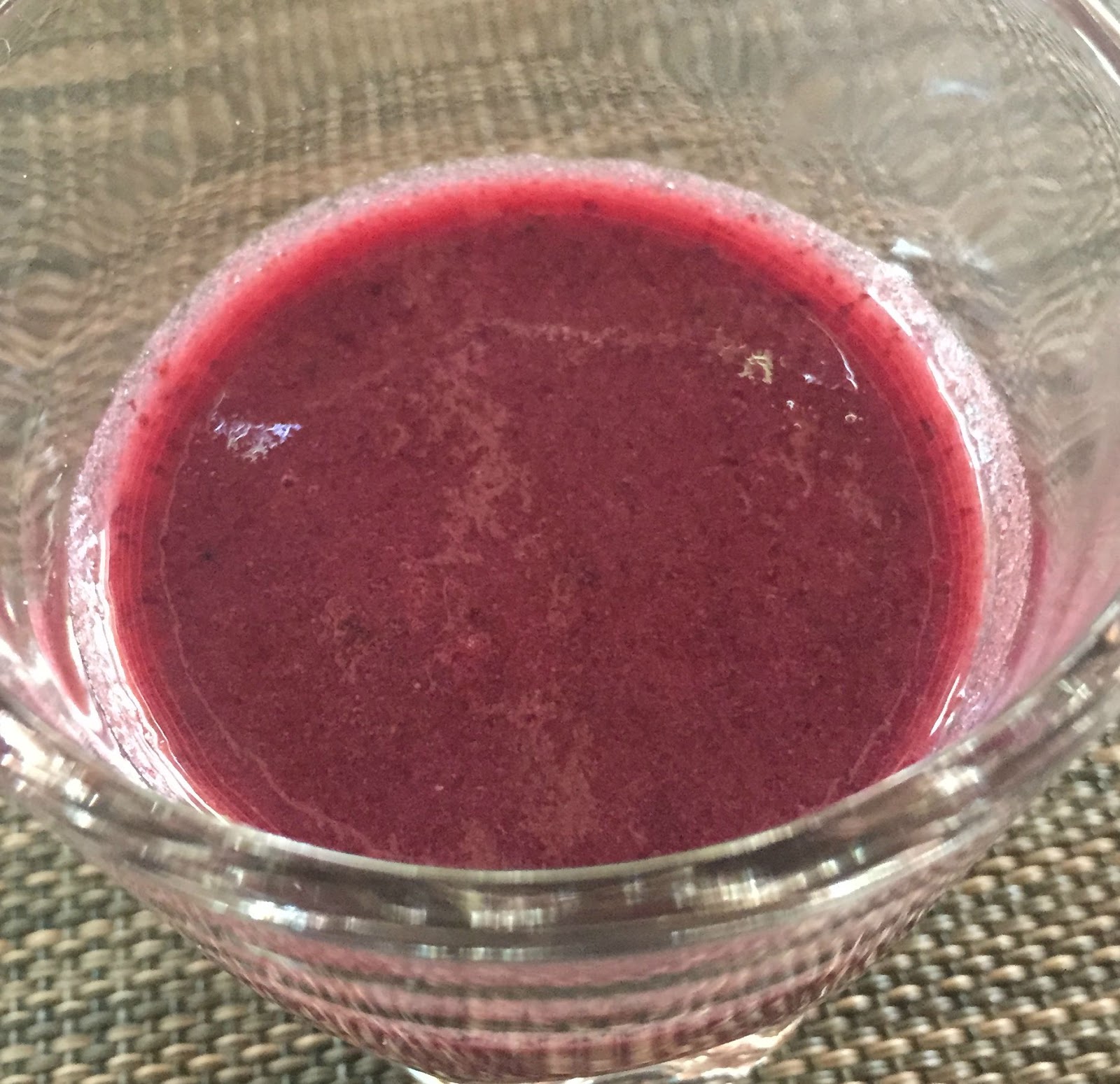 We got to have a cooking class earlier in the day and the chef told us about a cold blueberry soup he had made. Well – I’m not big on cold soups but I at least had to try it so they brought out a small taste in a glass. It was pretty good – I don’t think I’d want a whole bowl but it was very interesting for sure! 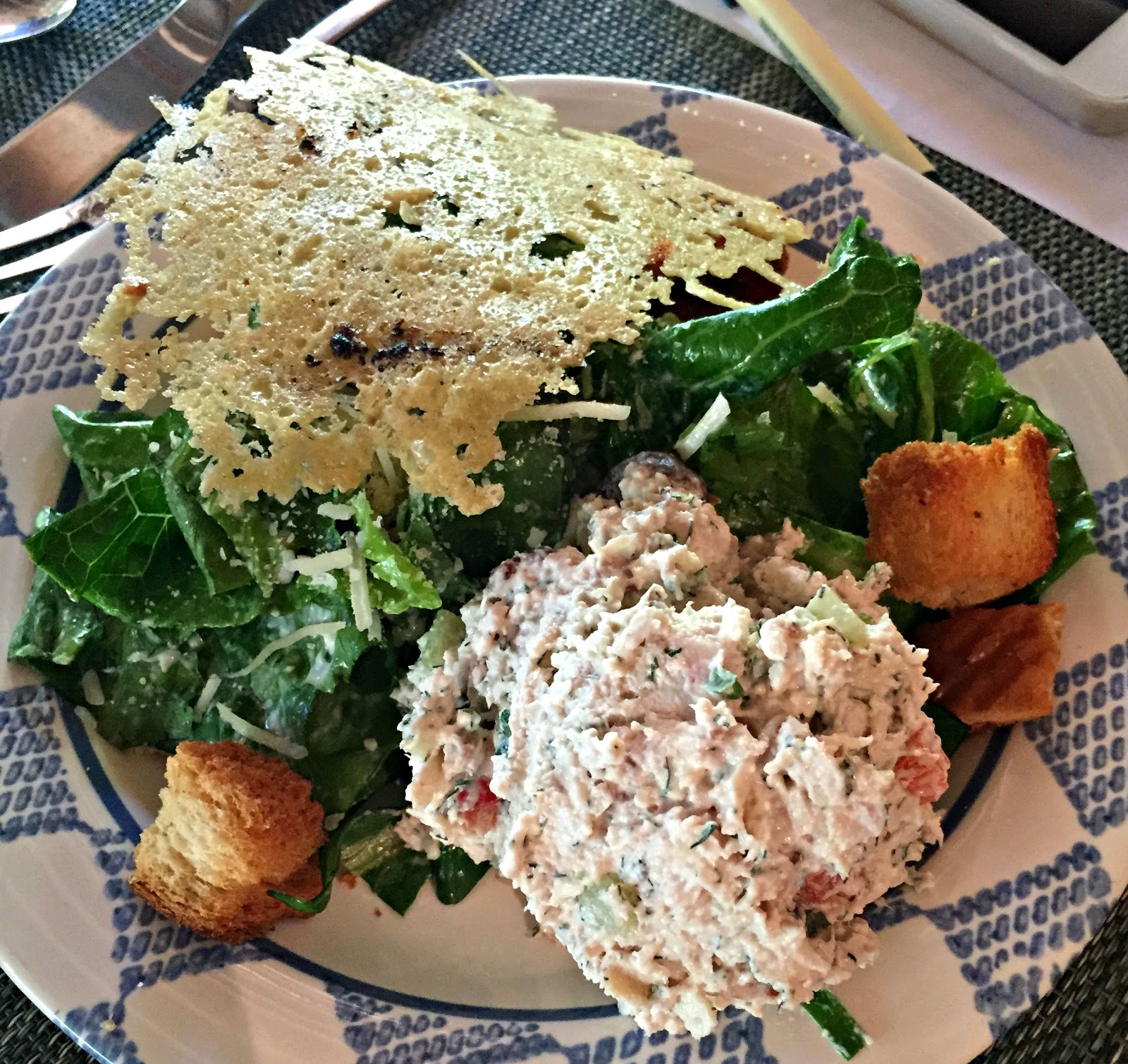 They’re famous for their dill chicken salad (it’s got grapes & walnuts) – one of the bloggers got a salad with a scoop of the chicken salad and really liked it. I was going to get it – but then I saw that I could get a… 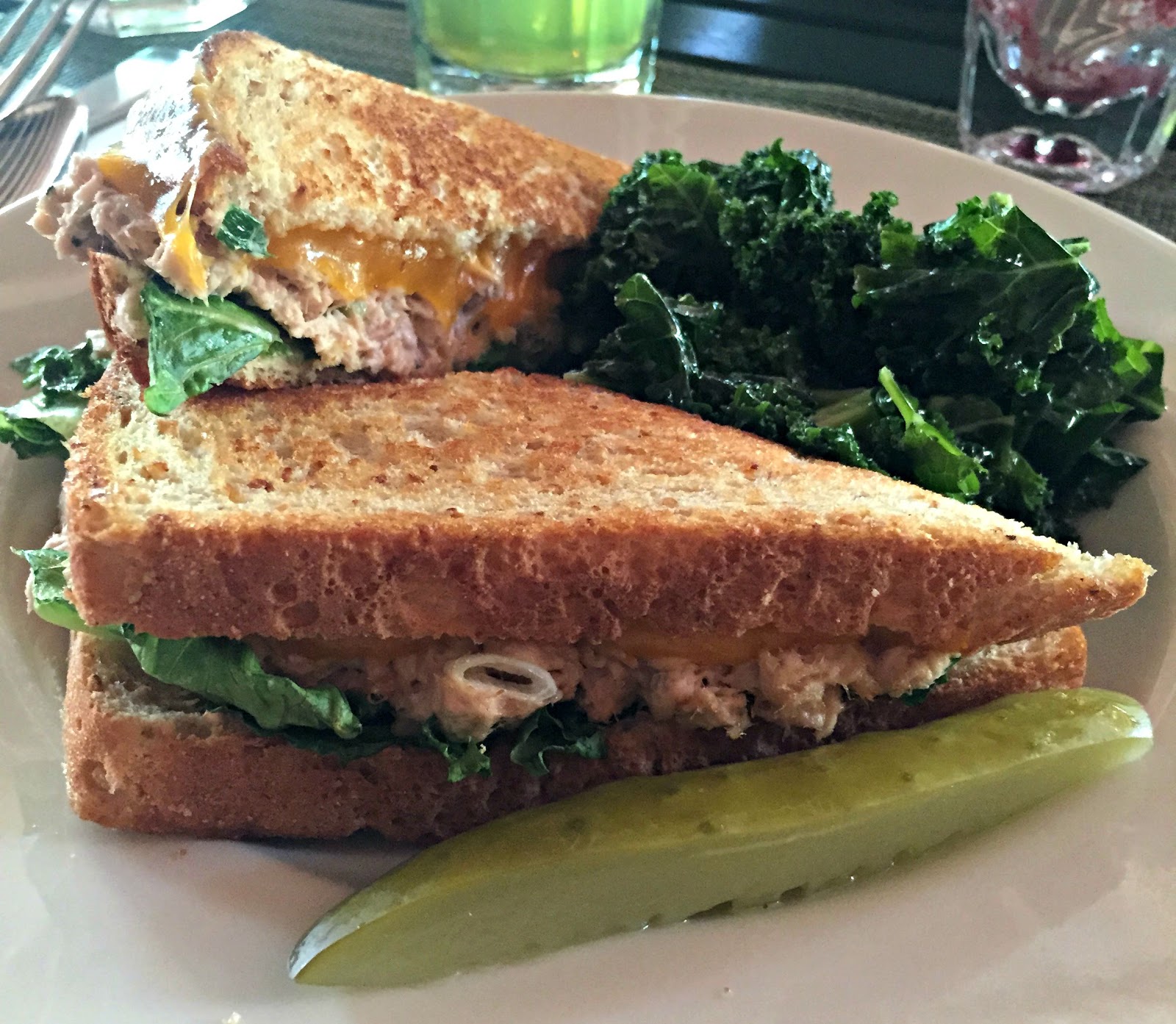 Tuna Melt ($7)! I love those!!! This was really good too – so much tuna and really filling. It was served with a kale salad – yeah – I’ve decided I don’t like kale. Too much roughage. 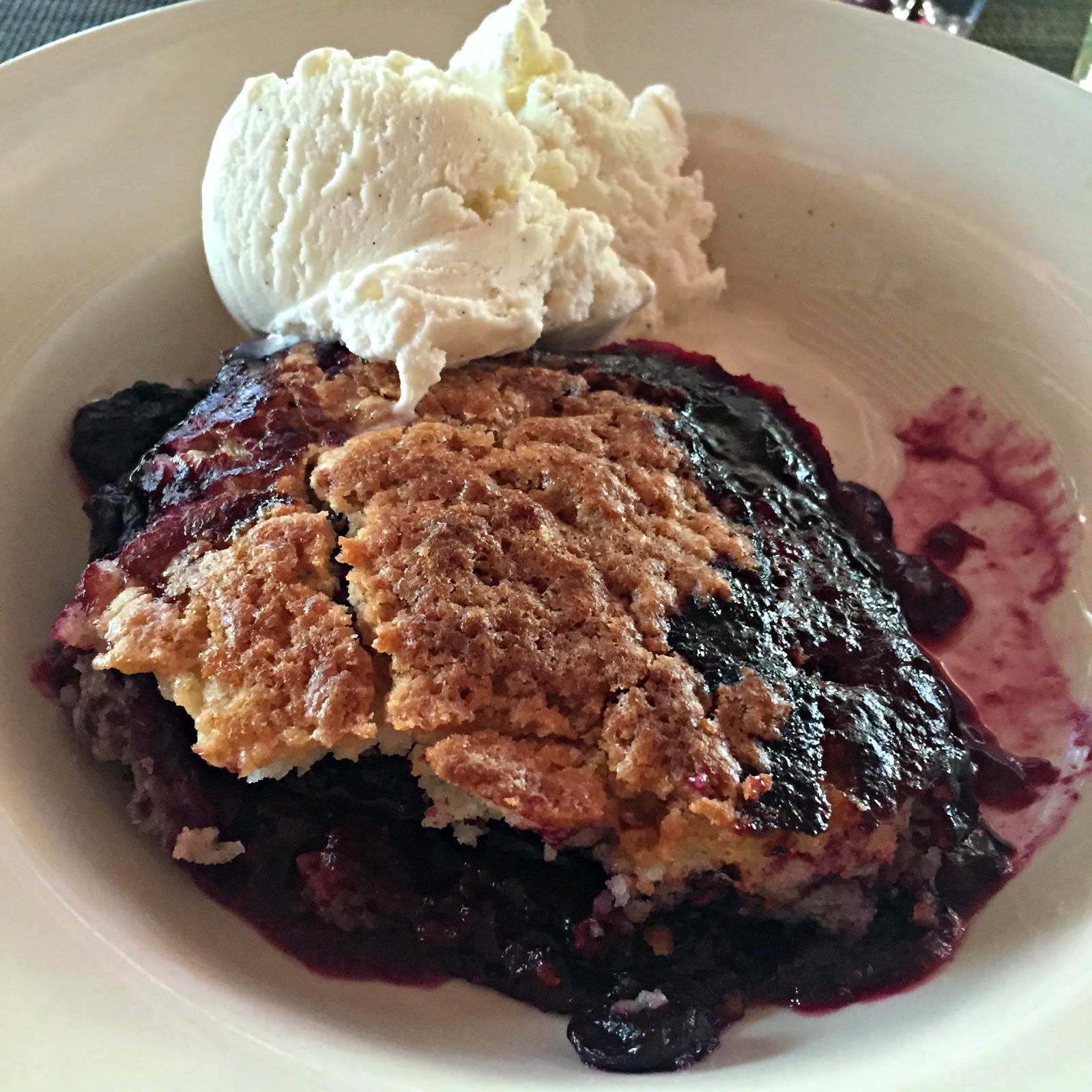 And then we thought – well – we’re not drinking – so let’s have dessert! I got the Mixed Berry Cobbler ($6.50) – and it was definitely a sharable size – but I didn’t. While I still like my mom’s peach cobbler better – this was a good substitute. The berries were fresh and tart – while the cobbler on top was sweet. Delish! 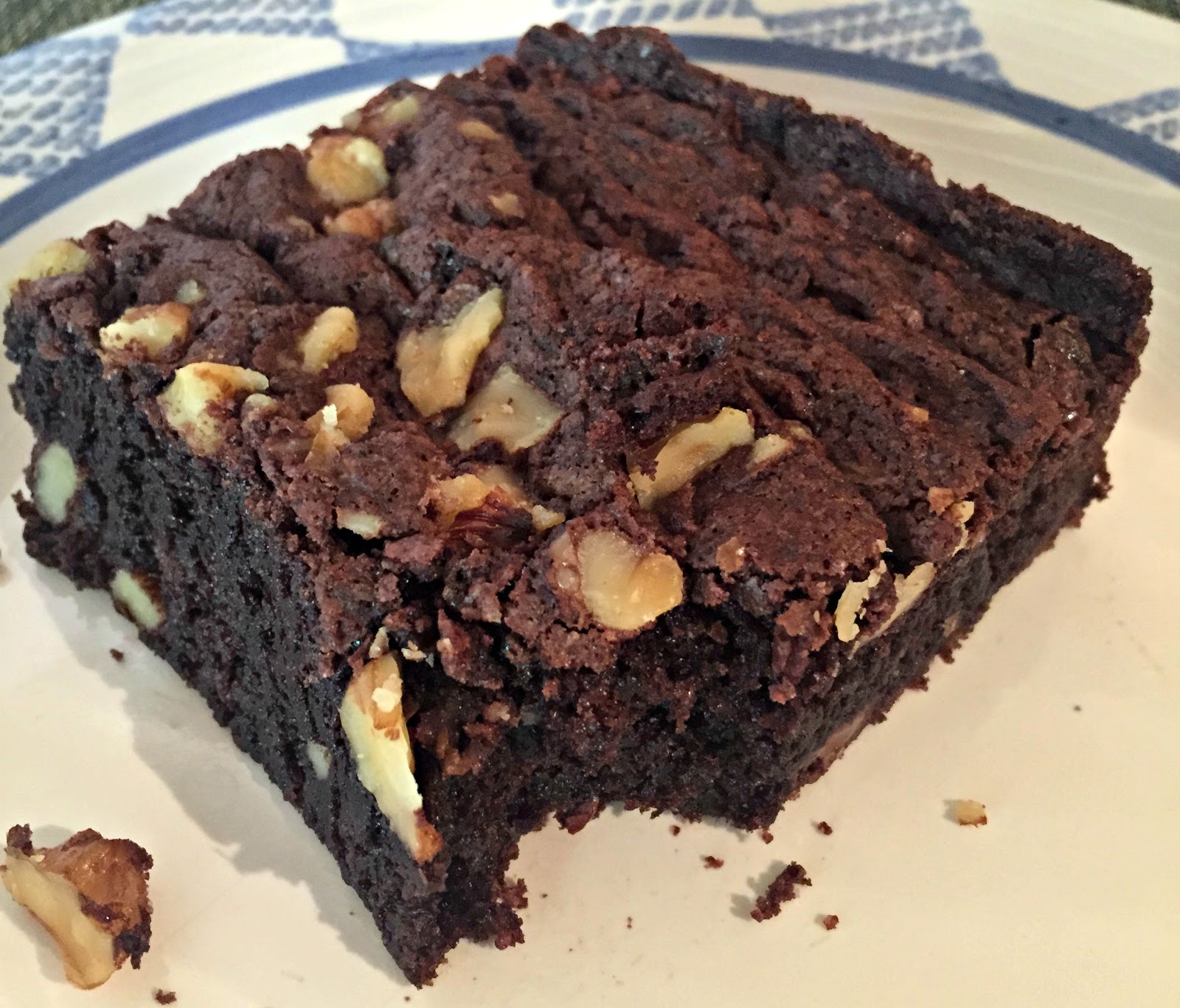 Danielle got the Ultimate Chocolate Brownie ($3.50) – she said it was pretty good – I thought it was really good – but I’m a sucker for a chocolate brownie.

After dessert we decided to go on a hike at Cedar Falls and then the spa for facials. We worked up such an appetite – we had to eat again! 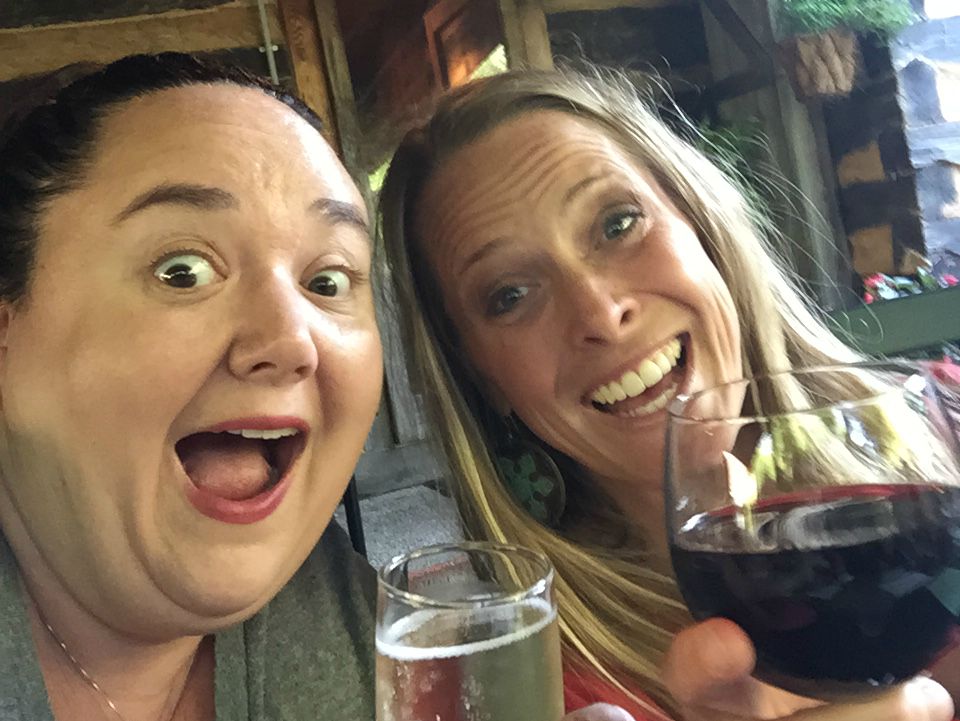 Here we are before dinner – I decided on a glass of Prosecco while Dani went for some vino! 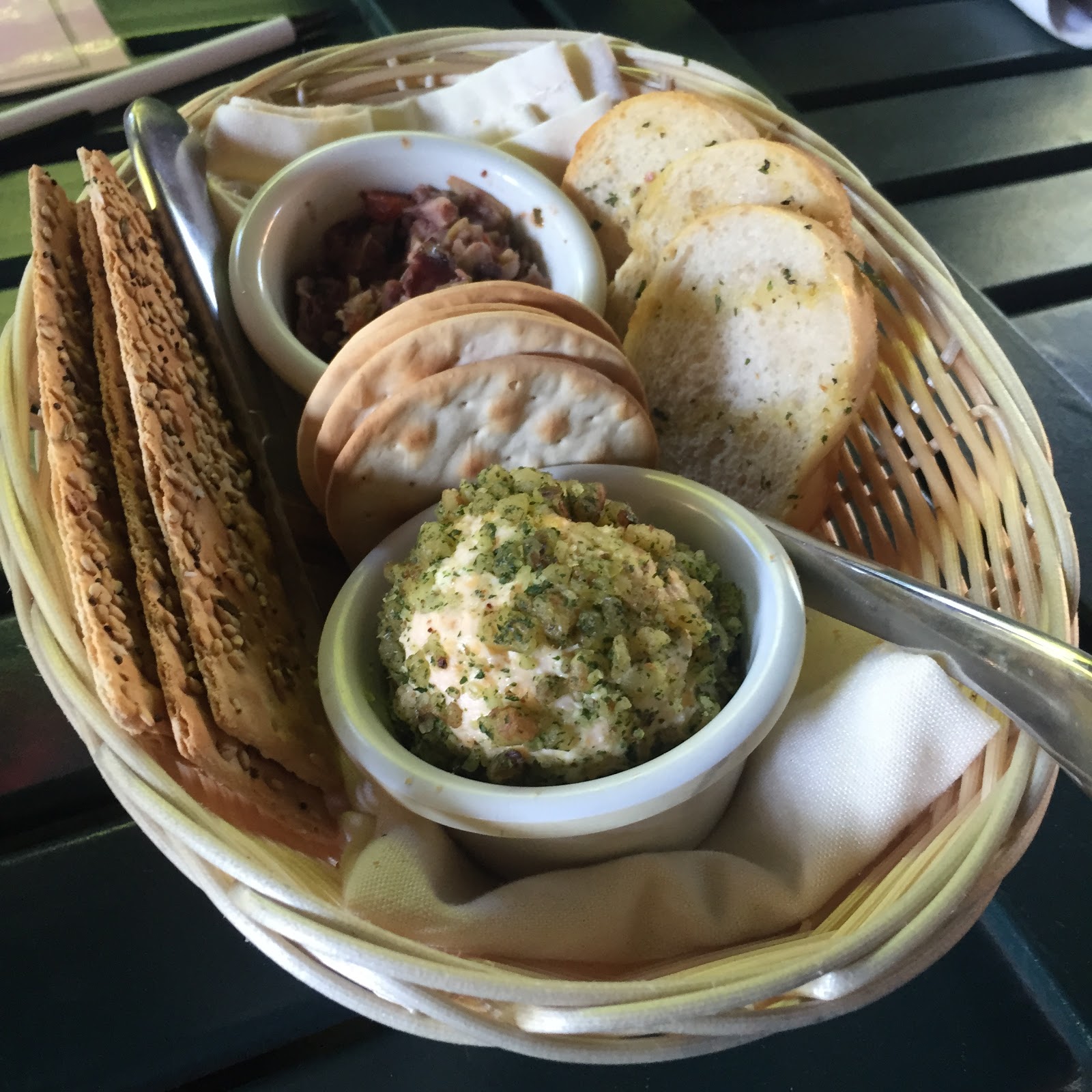 They started us off with the the Inn’s Wisconsin Cheese Ball & Olive Tapenade Basket ($7). This was REALLY good – I think I ate most of it myself. I can’t pass up a cheese ball. 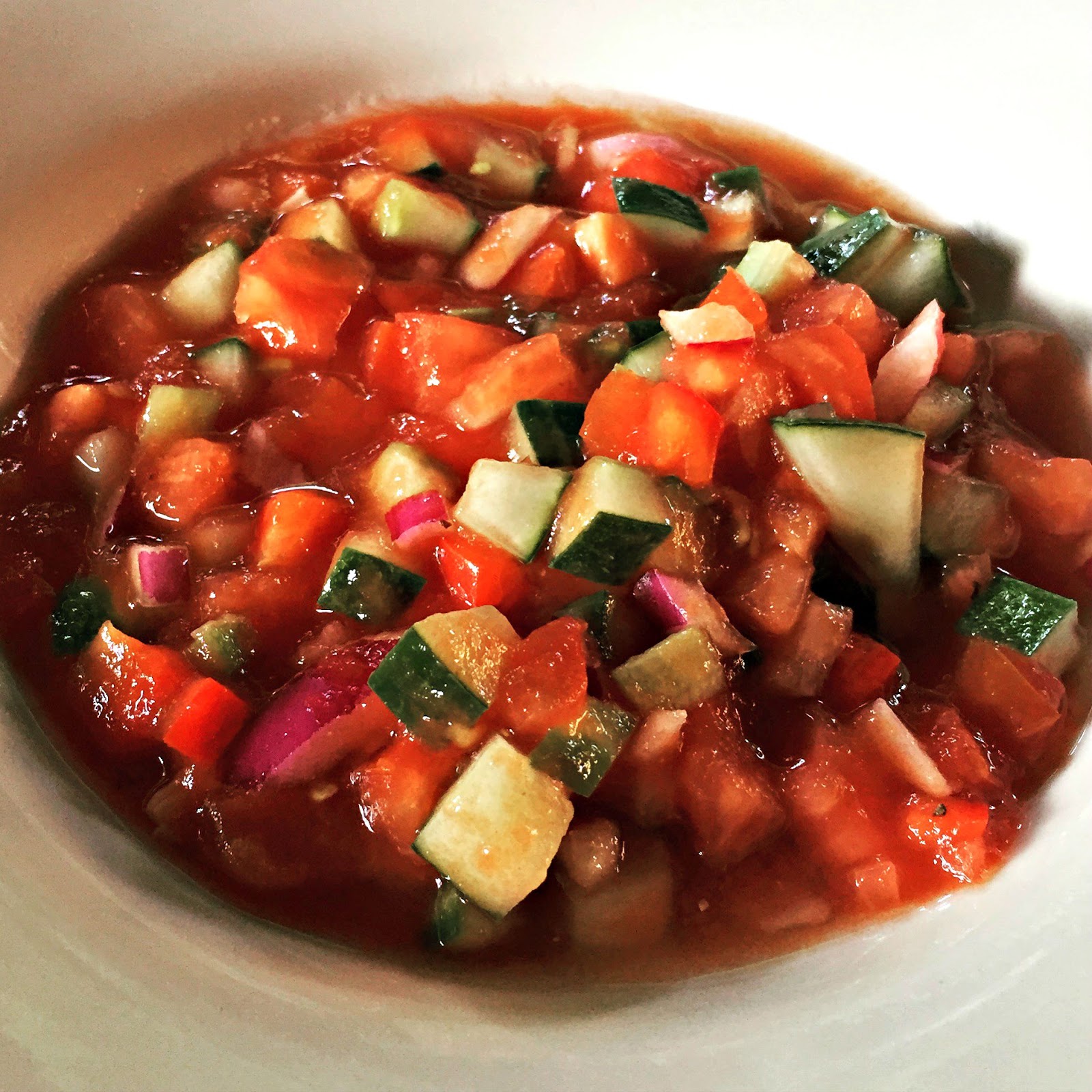 During our cooking class we prepped all the ingredients for Gazpacho (recipe below) – yum! Like I said – not a huge fan of cold soup but this was good. I could have just had all the tomatoes and spices. 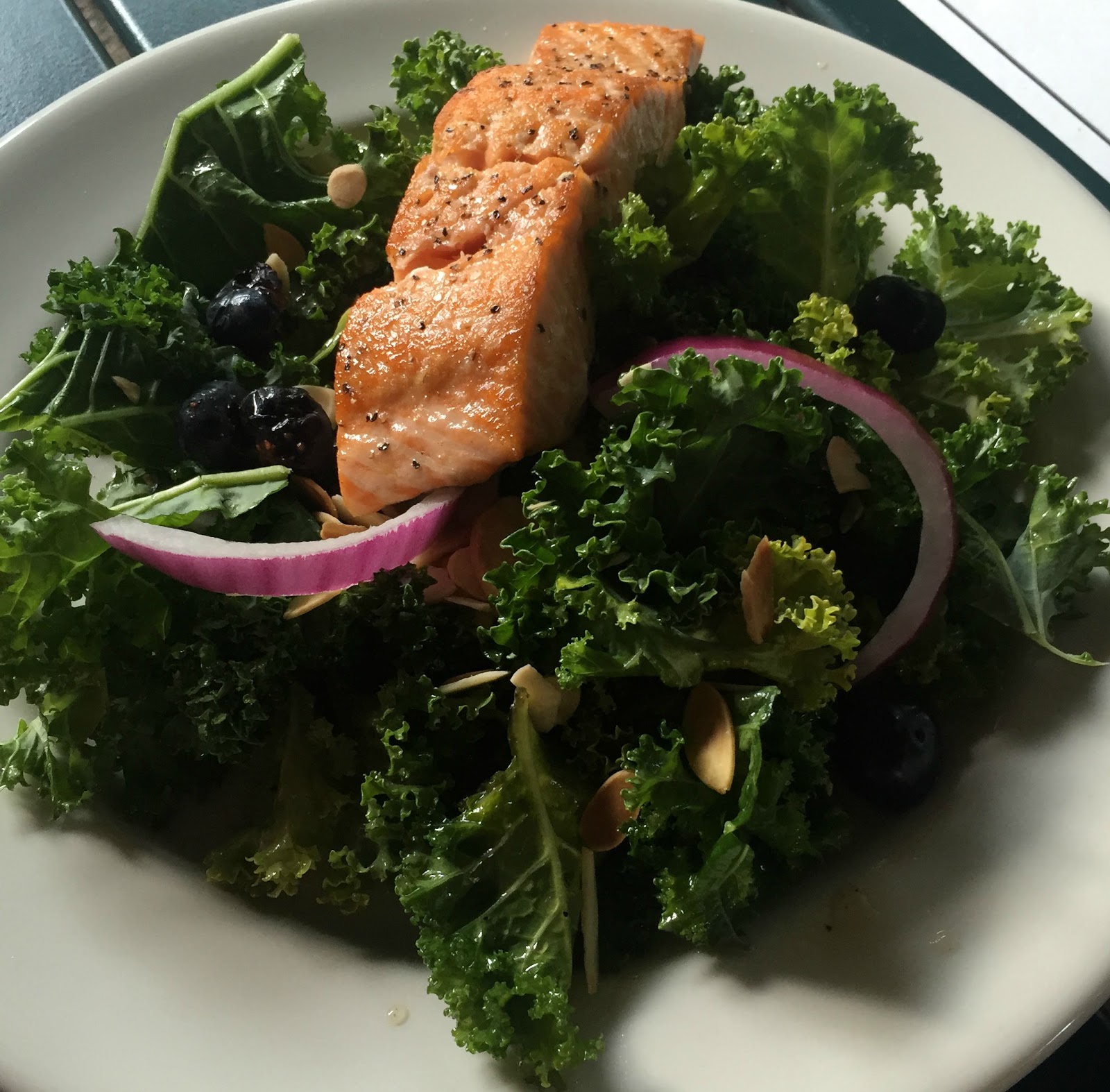 Danielle went for one of the specials (they have many – every day) of a Kale Salad with Grilled Salmon. She really enjoyed it. (Oh those kale people.) 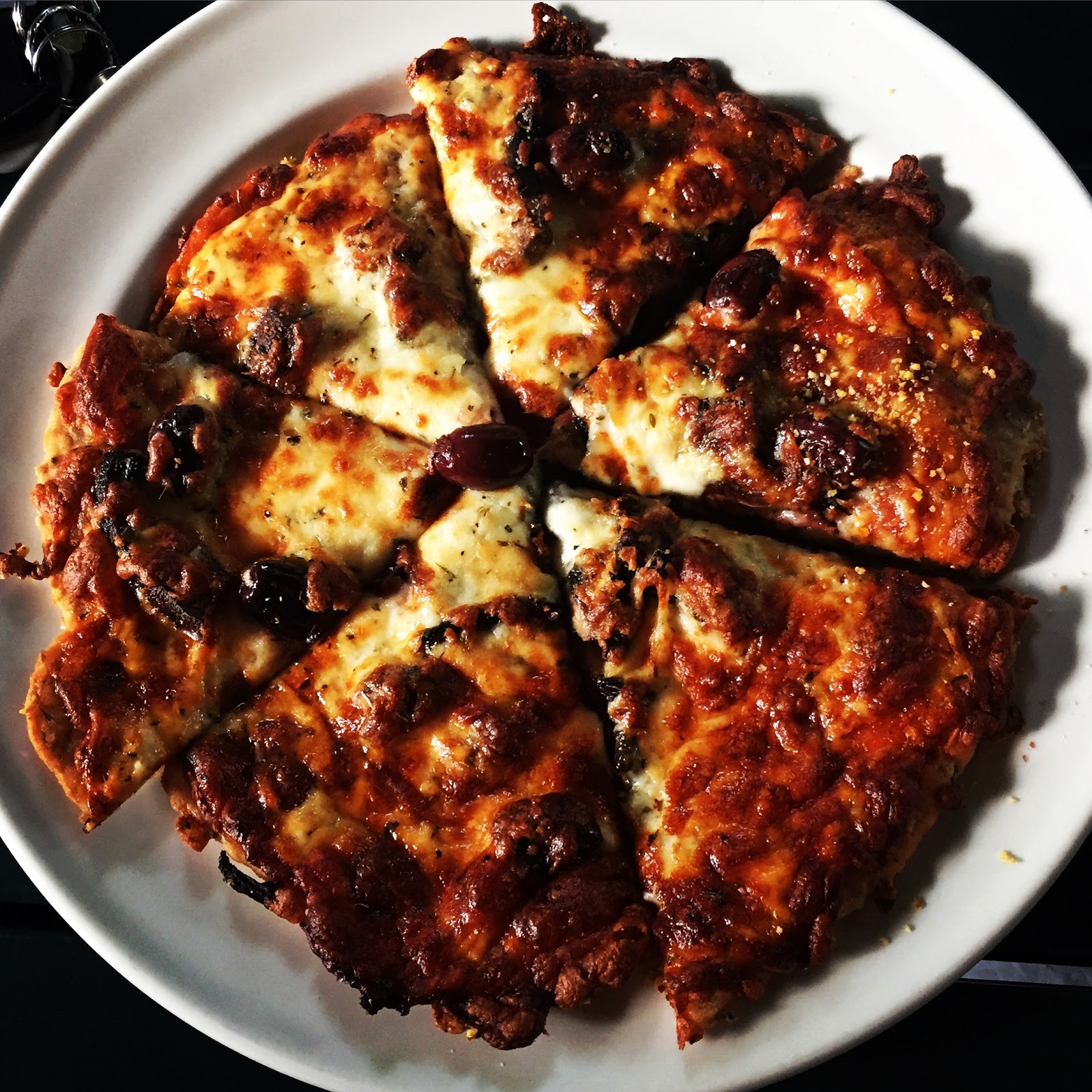 I went for the Spent Beer Grain Pizza – this was topped with just a pile of amazing goodness. I didn’t realize it wasn’t on the regular menu – so I’ll try and remember what it is – kalamata olives, sausage and salami I think. I think there was more – I just don’t remember – Chef/Ellen: if you see this and remember – post a comment!

Every single person at the table was super jealous of this pizza – it was so freakin delicious. Like I seriously can’t tell you how amazing it was. Chef Anthony deserves a pizza medal for this one!!! I’m so hungry for this now.

Ooh – and the crust – it was super crispy and you could tell it was whole grain-y but not so much so that it was all crazy and inedible. 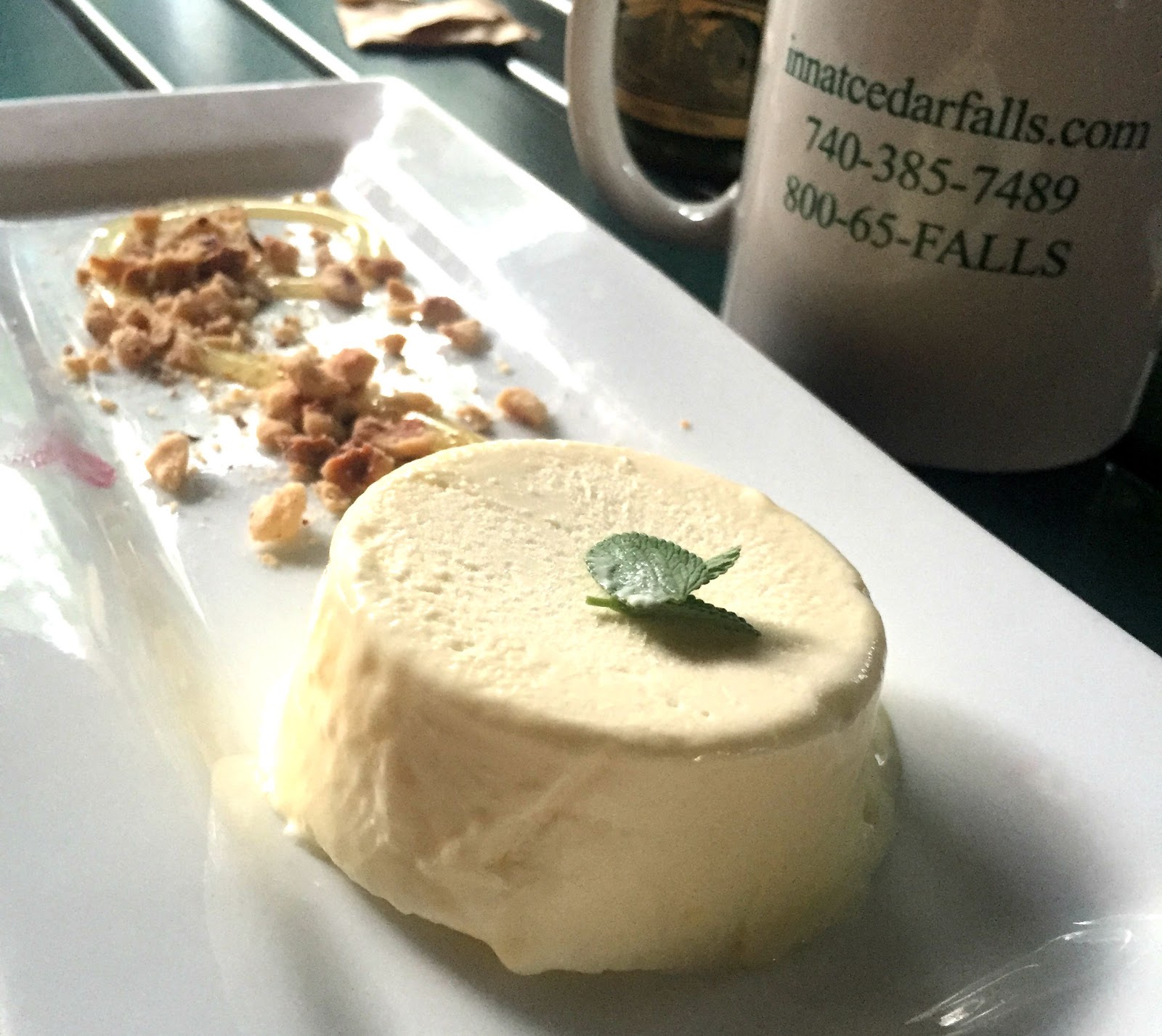 Here’s the Grappa Semifreddo – this was very interesting. It’s a custard type of dessert that is semi-frozen. It’s made from Grappa which is an alcohol from the leftovers of wine making (stems, skins, etc.) – and it’s super freakin strong. The dessert also had a boozy kick to it. So basically – boozy ice cream. 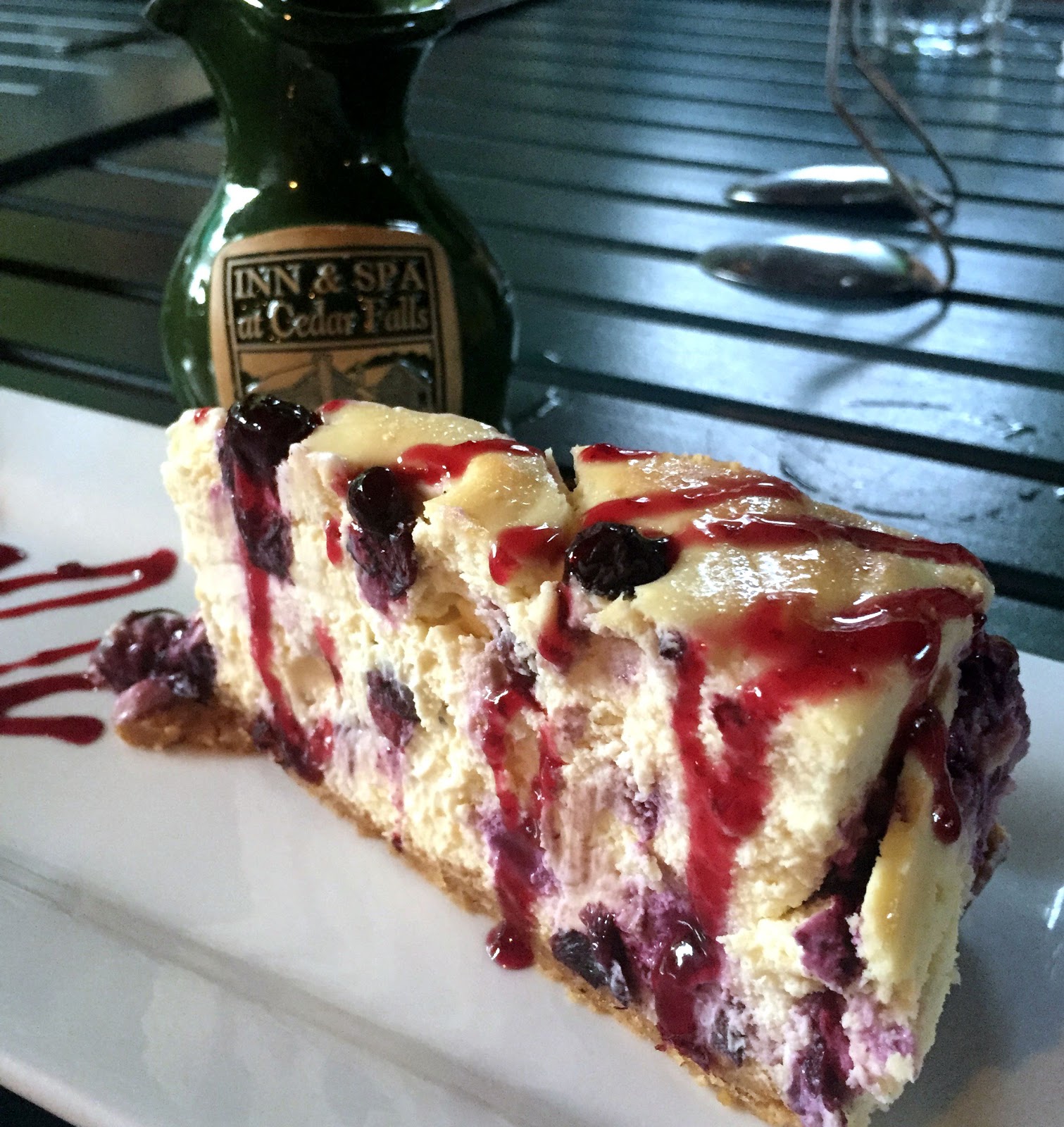 I got the seasonal cheesecake which was Lemon Blueberry. It was packed full of blueberries – so what’s not to like about that. I liked it a lot and better than the semifreddo – the grappa was too strong for me.

All in all – we all enjoyed our meals. We also had breakfast but I was so starving I forgot to take a picture! (doh!) They’ll also put together a sack lunch for you if you’re going on a hike. They literally have everything in one place – love it!

I’ll be making some recipes from their cookbook soon but for now – here’s the recipe for the Gazpacho. I might tweak this a bit and make it myself. 🙂

Ellen’s sisters love this one and it’s in the Inn’s cookbook – Savor the Seasons.

Chill 4-6 hours but best if made the day before.