Recently I got to go to New Orleans for the International Food Blogger Conference this summer and got to experience a lot of NOLA! Mainly food – of course – but we also toured the French Quarter and I they even gave me a microphone! (wha???) 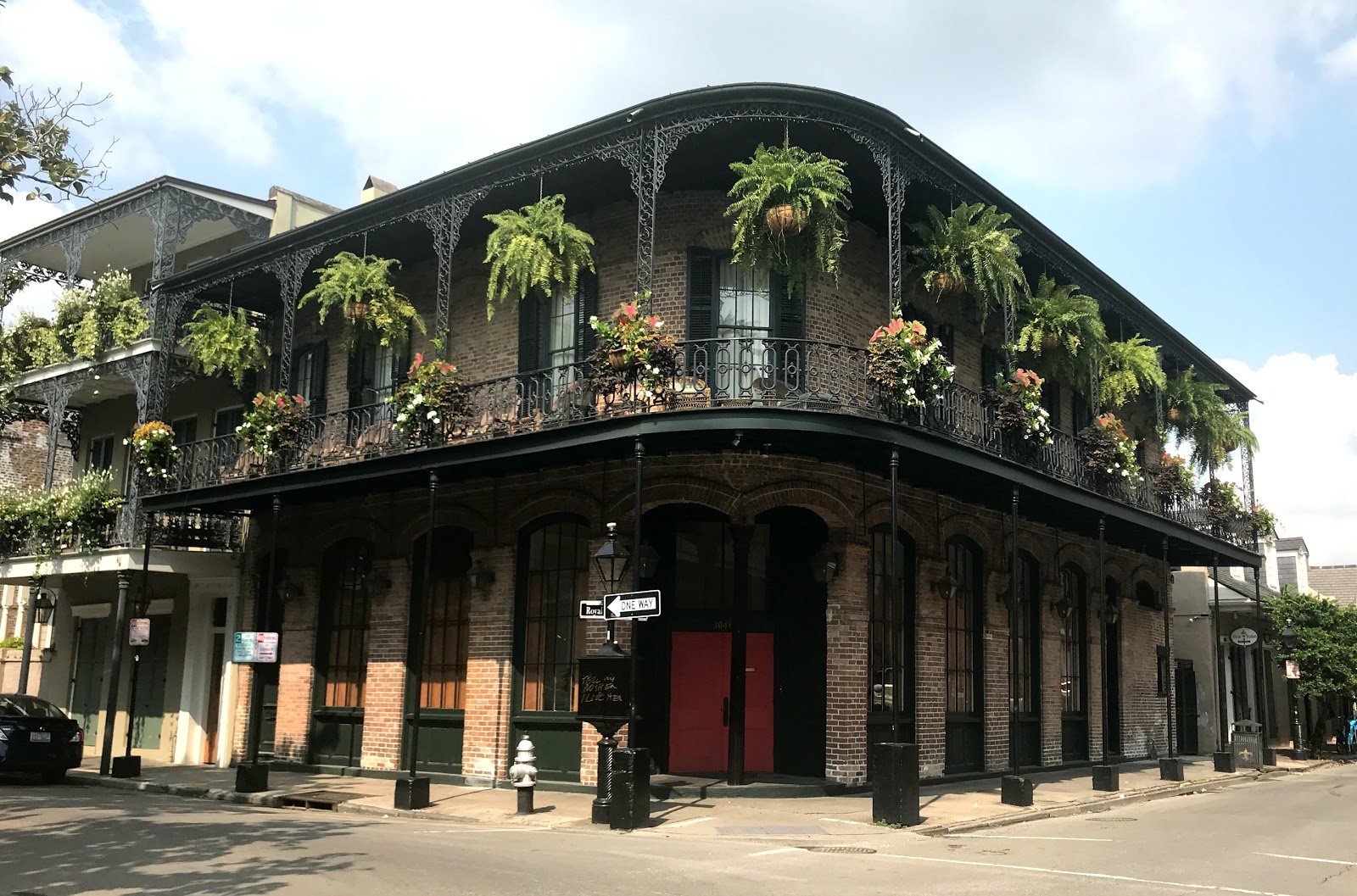 The architecture in New Orleans is so unique – and this picture is a great representation of it – outdoor living space is key and it’s highlighted beautifully throughout the French Quarter. If the city was architecture alone – I’d look into moving there tomorrow – it’s so beautiful! 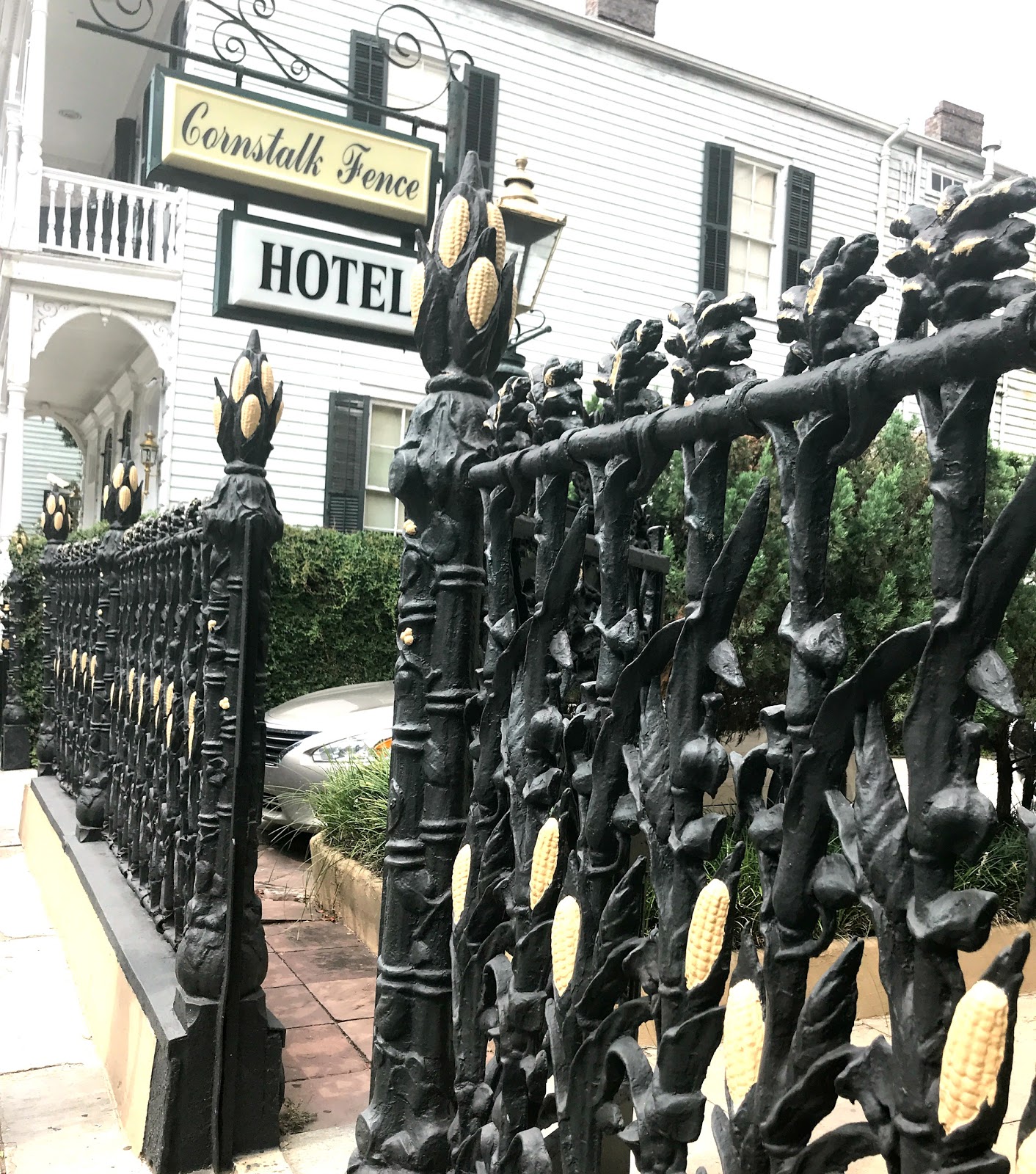 There are even unique architectural details in the hotels – like this one – the Cornstalk Fence Hotel! I mean – being a good Iowa girl – how could I NOT want to stay here???? The Cornstalk is a Luxury Inn in the French Quarter – very pretty rooms. 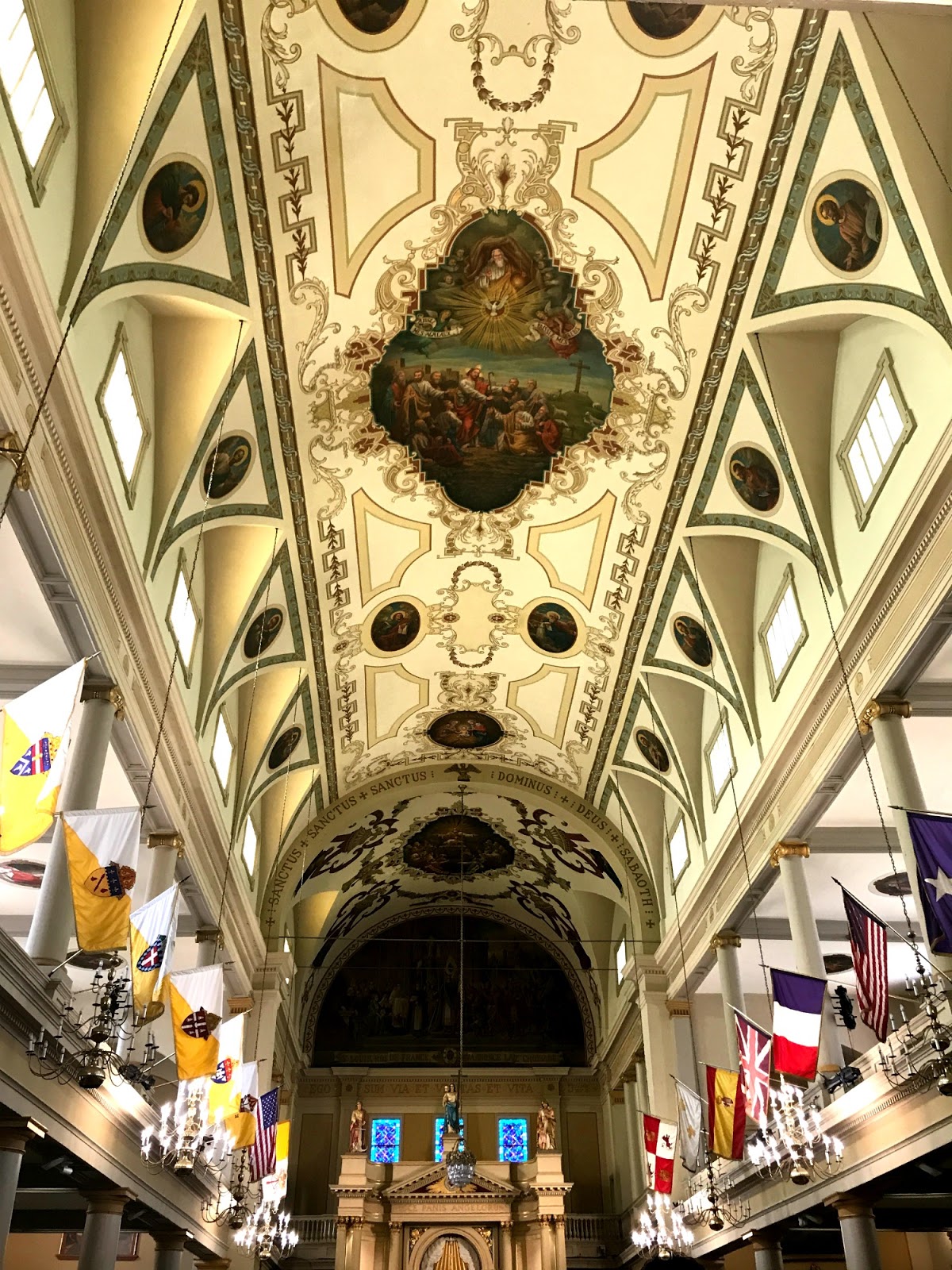 Also – walking around New Orleans – you can’t throw a stick without hitting historical places like the St. Louis Cathedral-Basilica. It was BEAUTIFUL – simply stunning. There are street performers surrounding the cathedral – which are fun and unique – and it’s just a block away from someplace I’d been dying to go! 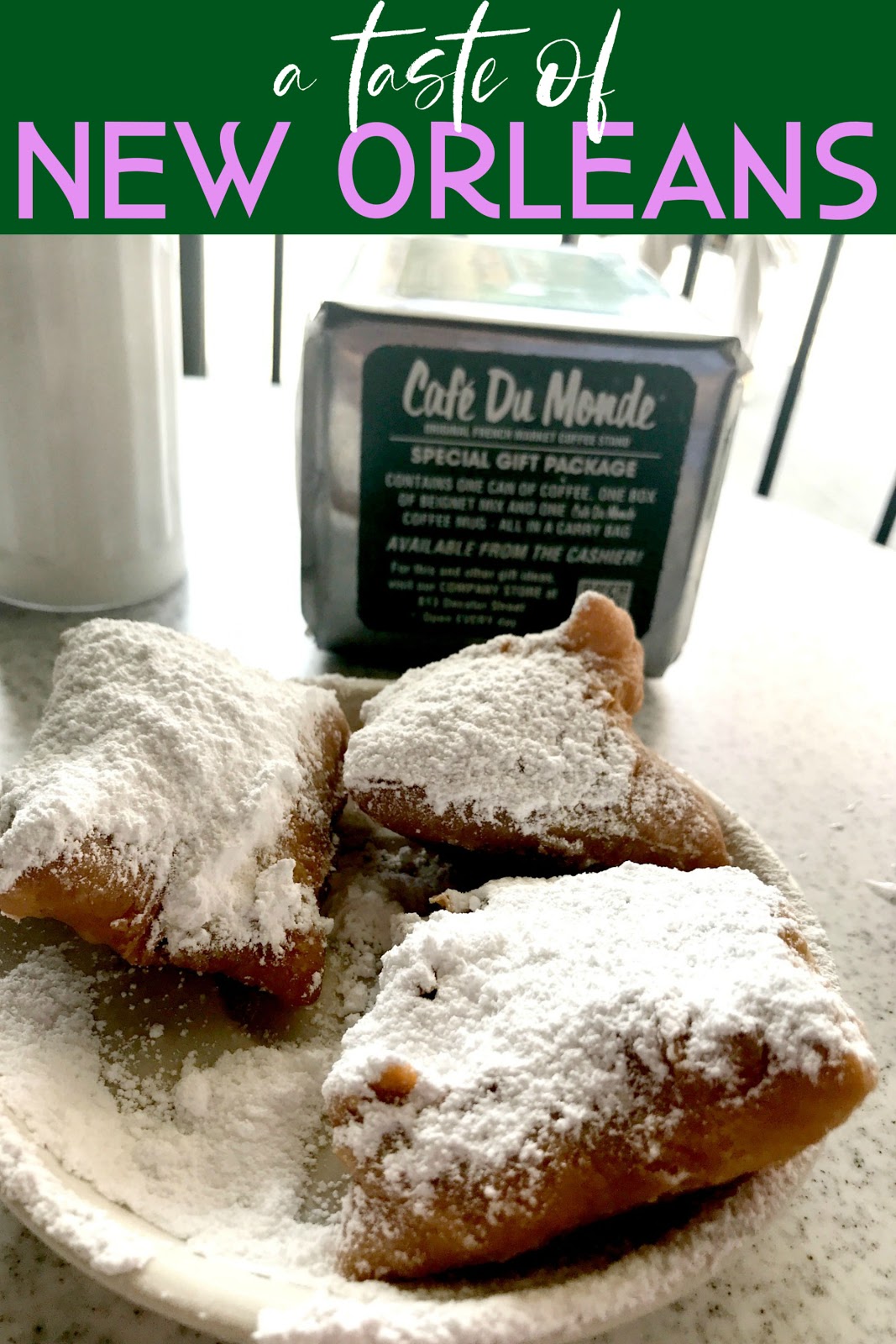 Cafe DuMonde – the home of the Cafe AuLait and Beignets! I’m not a coffee drinker so I went straight for the beignets. They’re fairly simple – a buttery deep fried pastry doused in about a pound of powdered sugar. These little powdery delights can be found on every menu in town – but Cafe DuMonde is truly the OG. 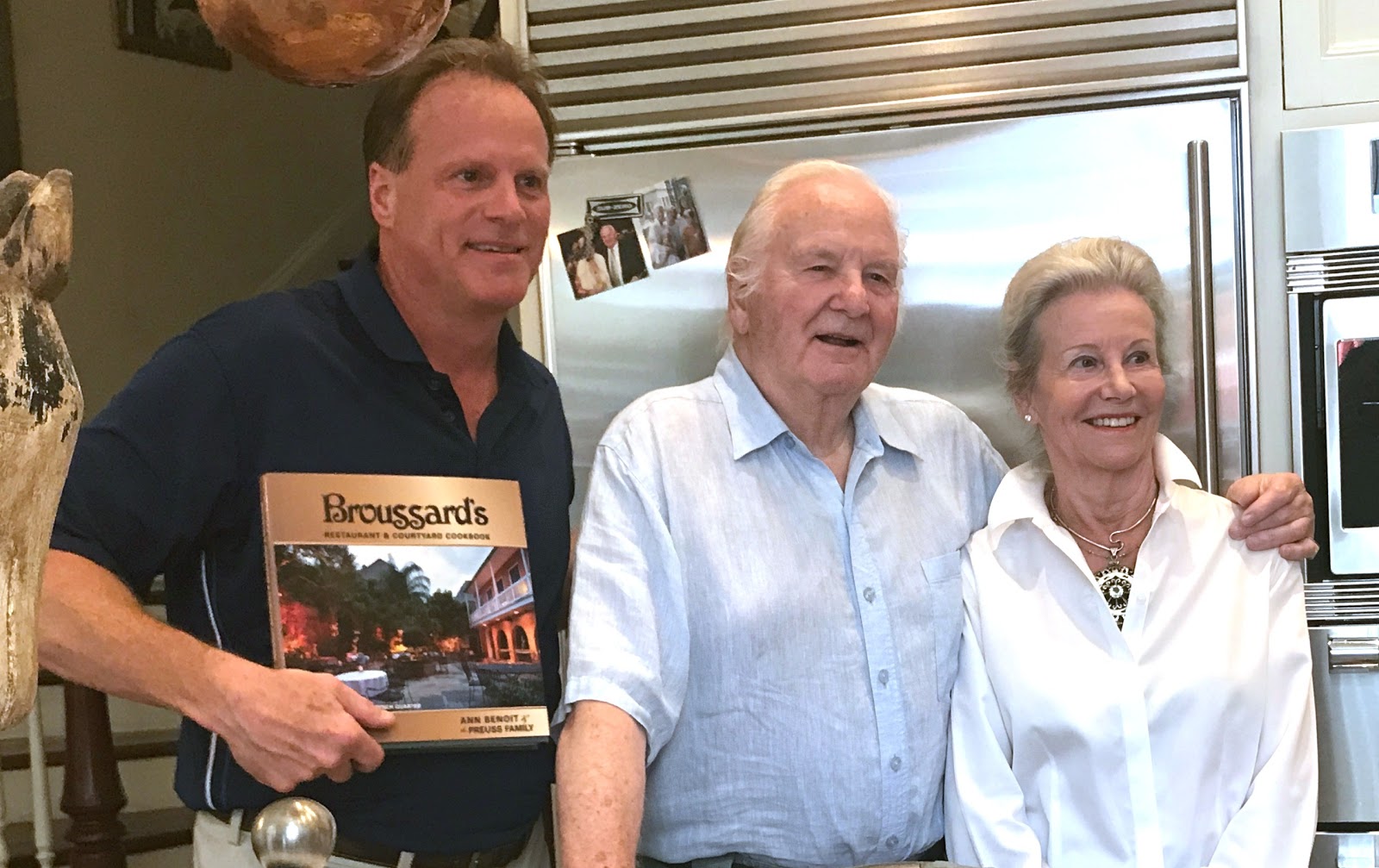 We also got to not only meet an amazing Chef – but enjoy some homemade gumbo in their home! Chef Gunther Preuss is one of the best in New Orleans where he was the head chef of Broussards (one of the most famous restaurants) for years. He’s definitely a legend and it was really great of him to open his home to us while we were on the Historical Culinary Tour of New Orleans. Chef Gunther’s son Mark led our tour – so we had a lot of history being shared. 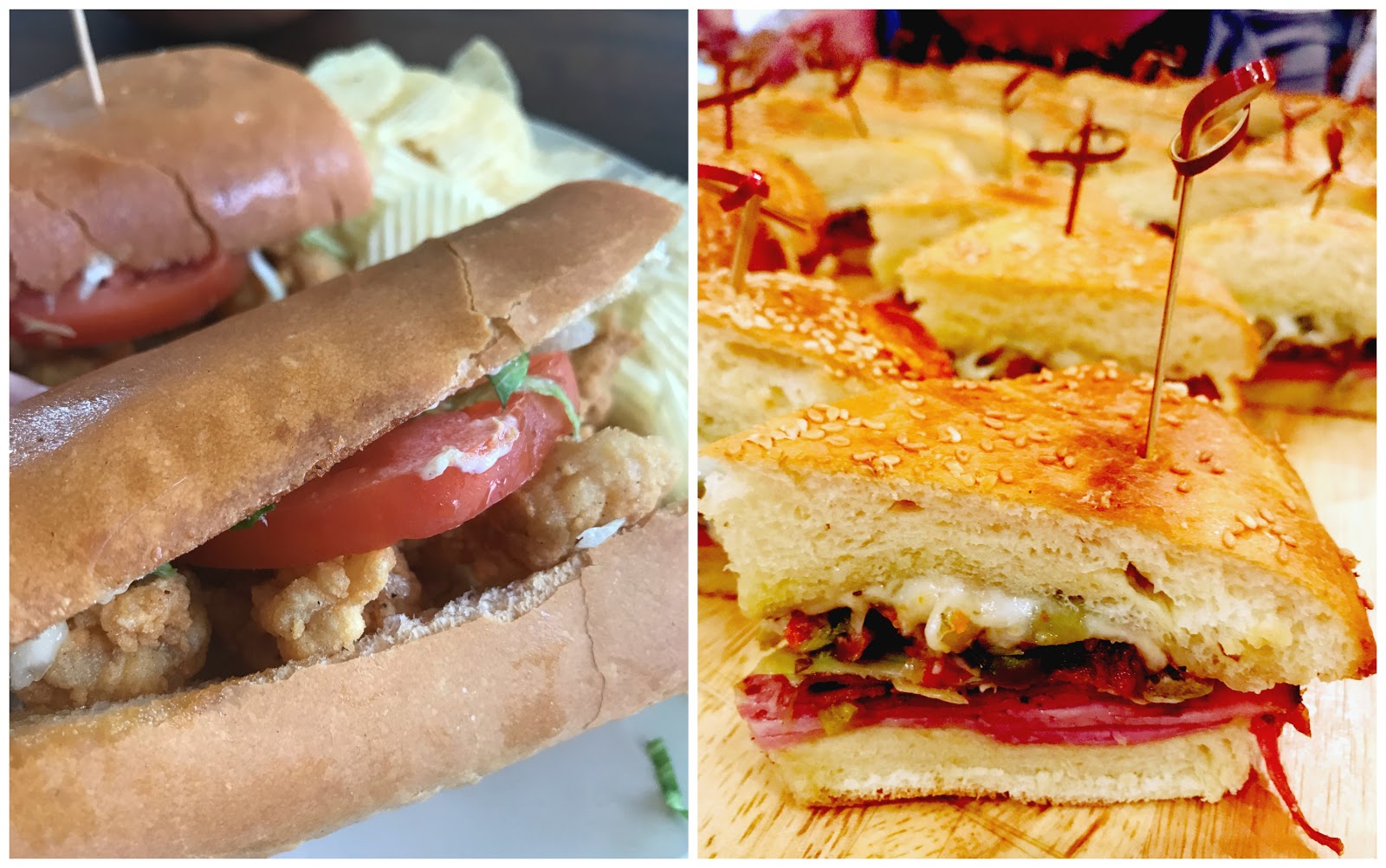 I also tried some sandwiches that NOLA is best known for! On my first day there – I grabbed a Shrimp Po’Boy in the French Market. The market is really cute – there are tons of shops, vendors and food!! On the culinary tour, we also got to try an OG Muffaletta – which originated in New Orleans. 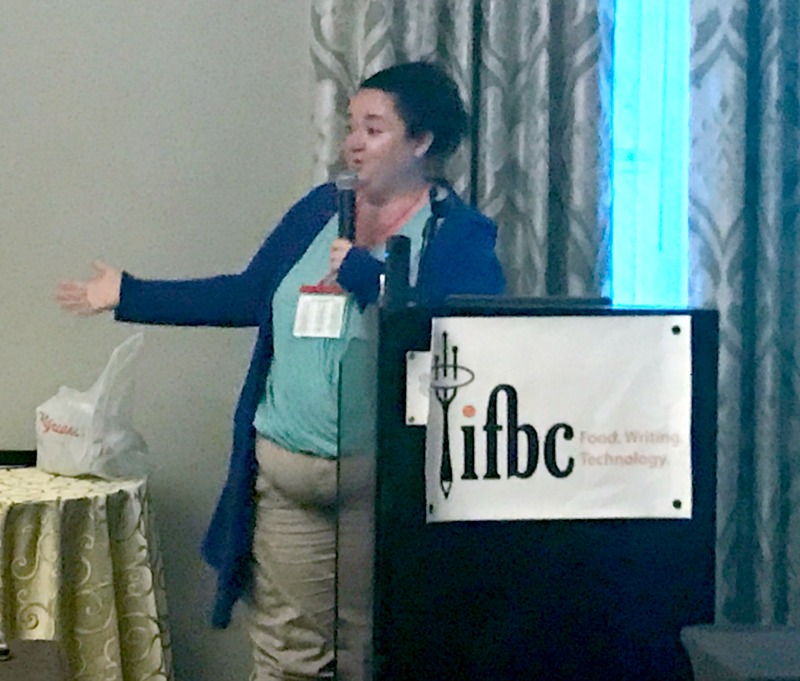 After a lot of eating, I had to do a little work and conference it up. And shockingly – they gave me a microphone! I had to do a presentation with 20 slides in 5 minutes. I have to say – I had everyone laughing for sure! (That’s really fast!!) I’m hoping that I’ll presenting for more than 5 minutes at next year’s IFBC which is in Juneau, Alaska!!! 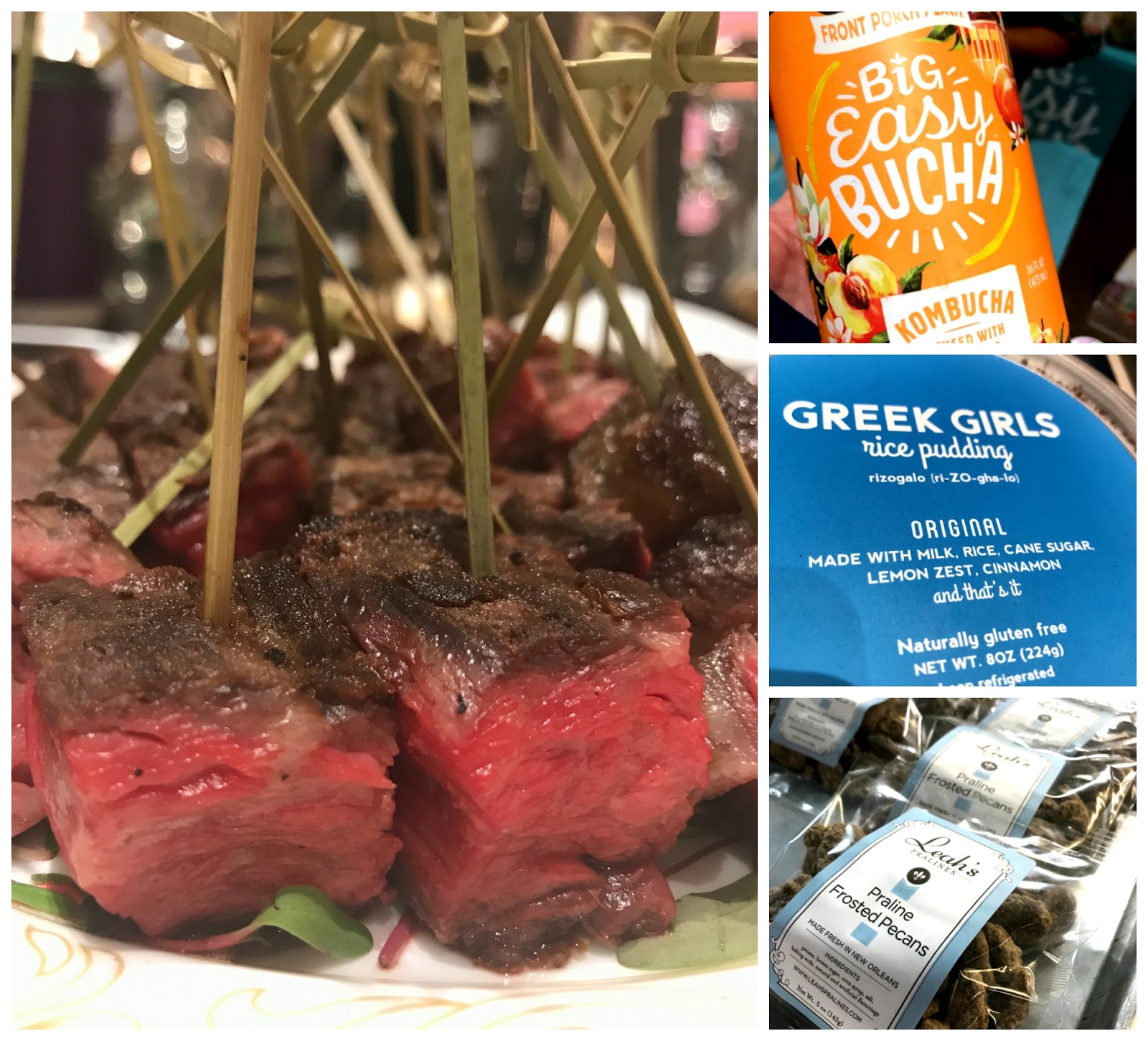 At a Taste of New Orleans event, I also got to discover some new products that I really fell in love with!

– Snake River Farms – These guys are not a NOLA company but they fed us these bites of Wagyu beef and I about died. Then they came back to our table with the leftovers. Yeah – we finished those off pretty quickly!
– Big Easy Bucha – I have tried kombucha and found it DISGUSTING. Then I was at this Taste event and was eating, eating, eating – and there was nothing to drink. So I went to the Big Easy Bucha booth and thought – ugh – at this point – I guess I’ll drink kombucha. And then I proceeded to drink an entire bottle of it. It was fucking delicious!!! No idea why theirs was so good – but it’s amazing! My favorite was the Front Porch Peach. If you live in the Southeast – you can find them at Publix – and I’m jealous. (they can’t ship because the probiotic-y stuff in glass bottles might explode)
– Greek Girls Rice Pudding – I find rice pudding pretty gross – but this was really good! You can find them at Whole Foods in NOLA.
–  Leah’s Pralines – I found out it’s pronounced “prahhh-leenz” and then I ate the shit out of them. Honestly though – my favorite thing were the Frosted Pecans. I could have eaten a pound of them! They have a shop in the French Quarter. 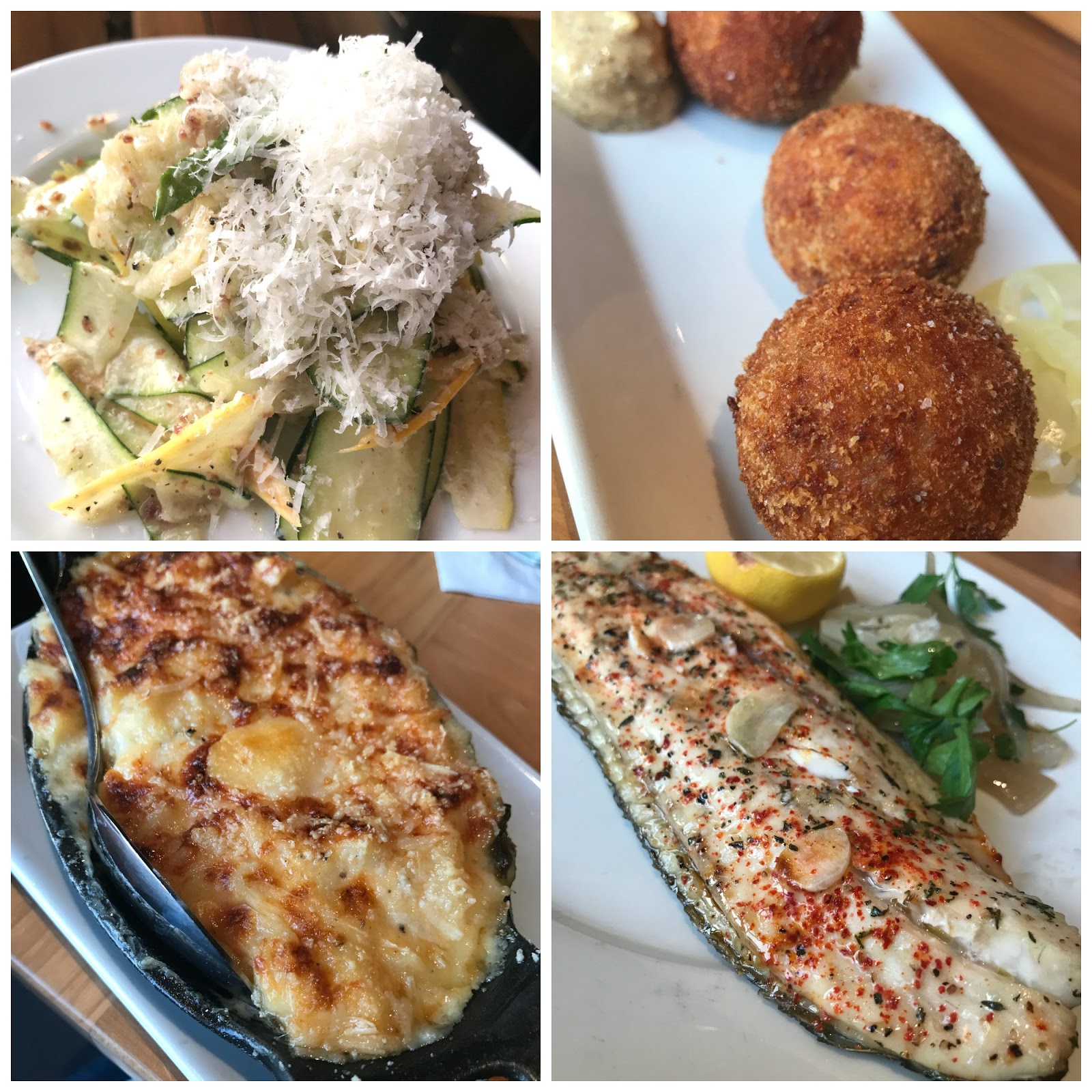 When we had a free night – we found a great restaurant called Cochon. It was a quick Lyft ride away – and man oh man – we ate our faces off! They have a very sharable menu – and we just kept ordering! Clockwise you’ll find:


Thoughts overall – the boudin balls were so delicious! They’re rice and sausage balls that are fried – omg- so good. The fish was also delicious – light, flaky – perfection. The squash salad and macaroni & cheese were just ok – definitely overshadowed by the other dishes. 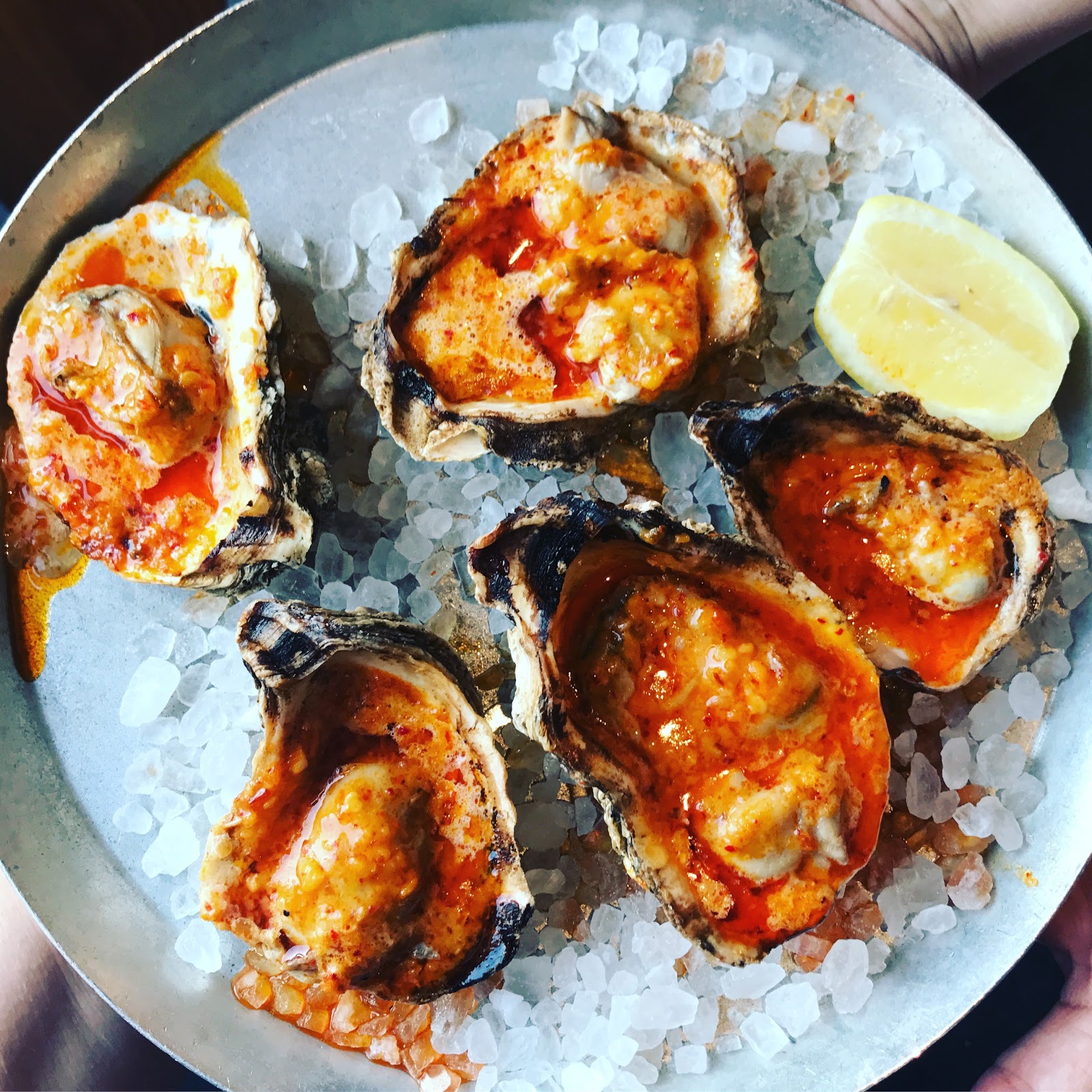 Then we have the Wood-fired oysters with chili garlic butter ($14). See when I was riding the hop on-hop off tour site seeing bus – our tour guide told us that we all NEED to eat char-grilled oysters while we were in town. So – I was on a mission! And I got to Cochon and there they were on the menu;


Woohoo!!! I’m not much for oysters – but the char-grill part made me thing they would be somewhat cooked so I went for it and I’m so glad I did! But we uncovered a secret:

TRAVEL TIP #2: Dip the Boudin Balls in the chili garlic butter from the oysters. HOLY SHIT THIS WAS NEXT LEVEL!!

There was a father-daughter seated next to us that were asking us about everything we ordered and they followed suit on this one and agreed – this should be on the menu! The boudin balls were served with mustard but the chili garlic butter was where it was at!! Perfection! 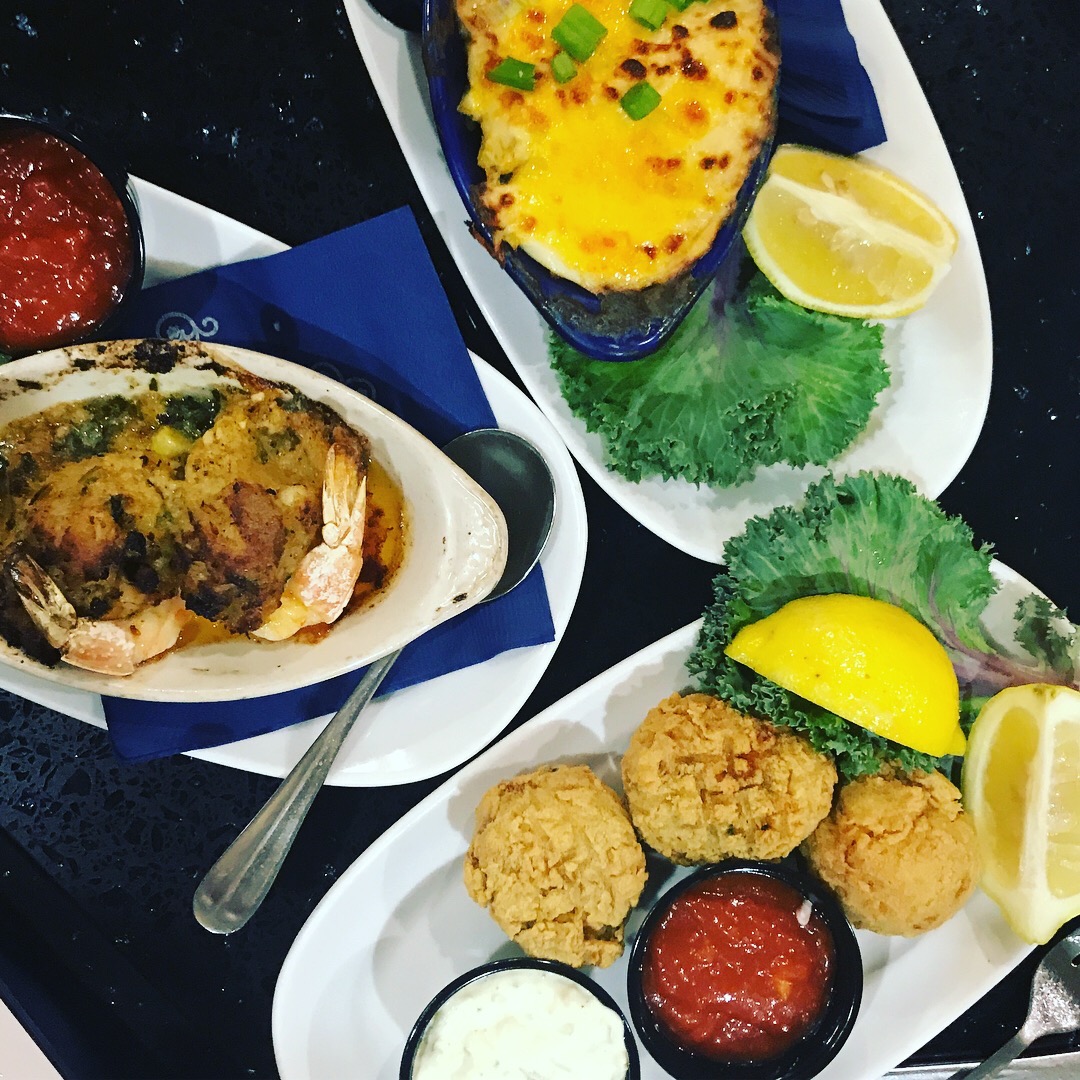 We had an open lunch one day and headed out to Deanie’s Seafood in the French Quarter. We’d heard good things about it and that it was a must stop. We tried a variety of things on the menu – crab augratin, stuffed shrimp and crab cakes. And some places give you bread before your meal but Deanie’s gives you a bowl of red potatoes – seemed odd but they were spicy! All in all Deanie’s was fine – but didn’t even compare in any way to Cochon. 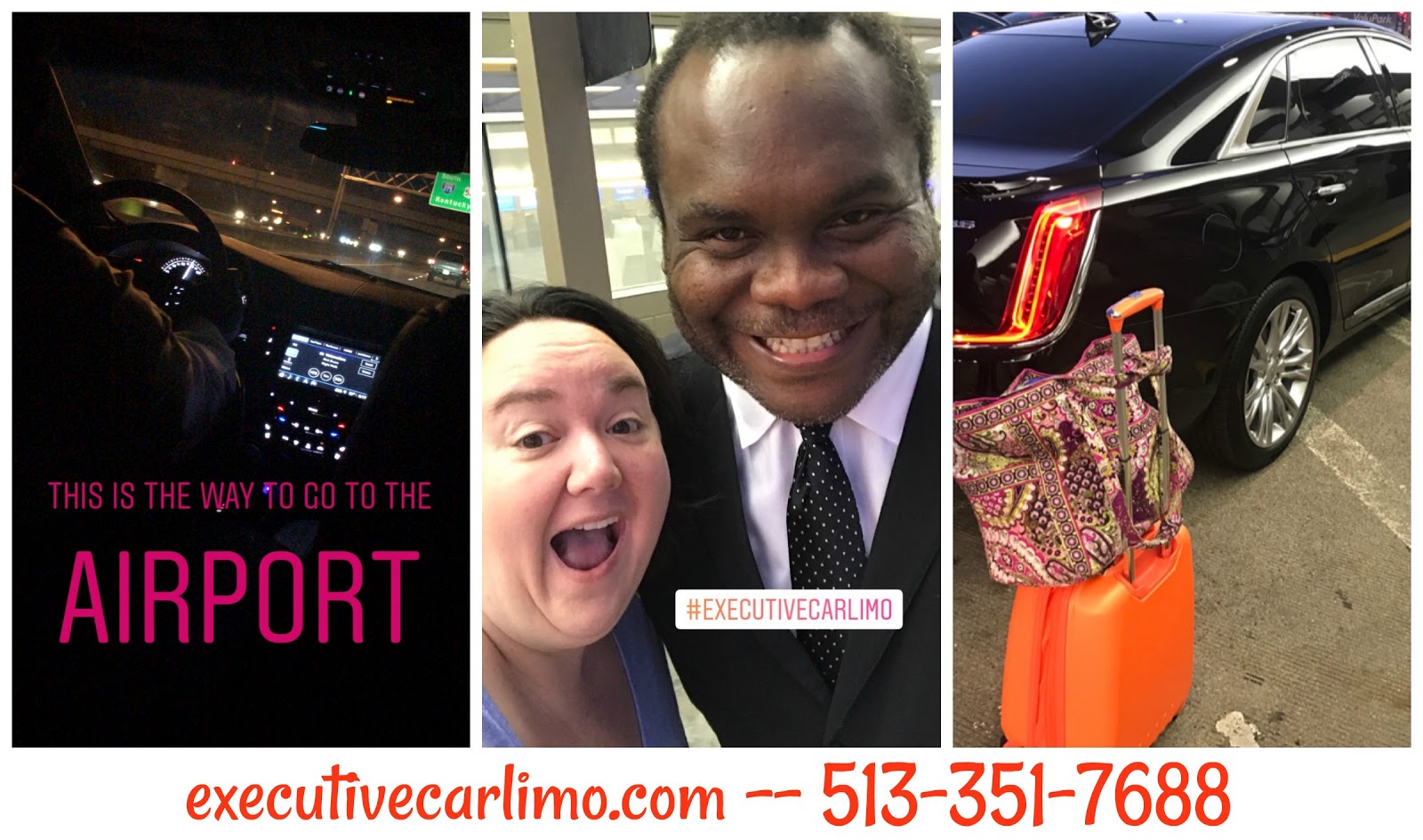 I also want to give a big THANK YOU to Executive Car Limo here in Cincinnati. I recently worked with them on a project for my day job and they offered me the royal treatment for a personal trip and I jumped at the chance! I hate driving to the airport – especially early in the morning! Ugh! I had someone pick me up and drive me right to the door – then when I landed back home – and I was completely exhausted – I had a ride waiting for me!!!

If you are looking for a car service – for the airport – or for anything – I would highly recommend ECL! I had worked with them the week prior on a load of high end influencers that were in town – and they were super easy to work with and I would definitely use them again! 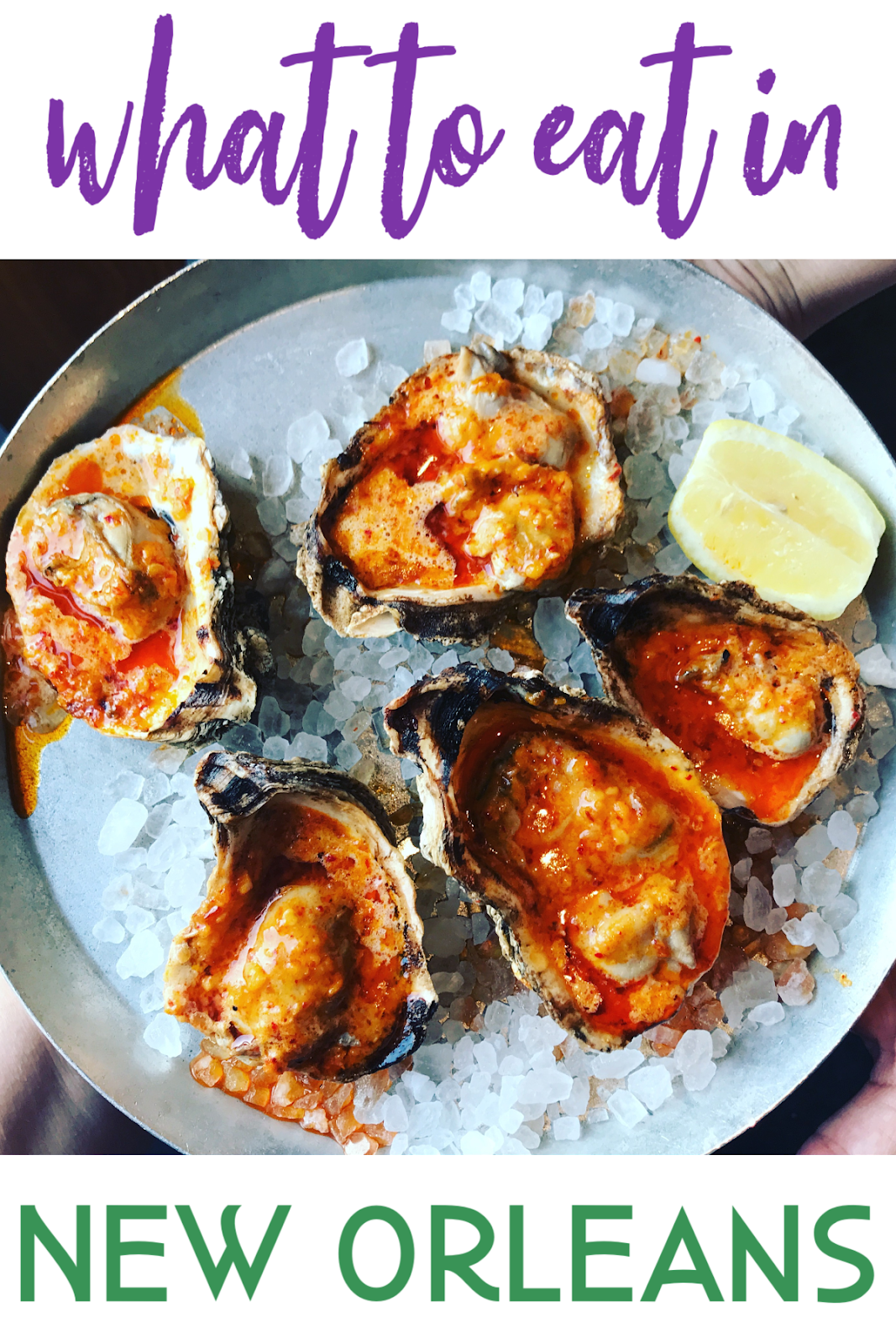 So there you have it – all sorts of yummy delights around the French Quarter! I was excited to visit NOLA and had a great time! I’m not a drinker so my time on Bourbon Street was minimal – as in about 5 minutes – that said – there’s plenty of things to do that have nothing to do with boozing it up! And I definitely found some amazing food!