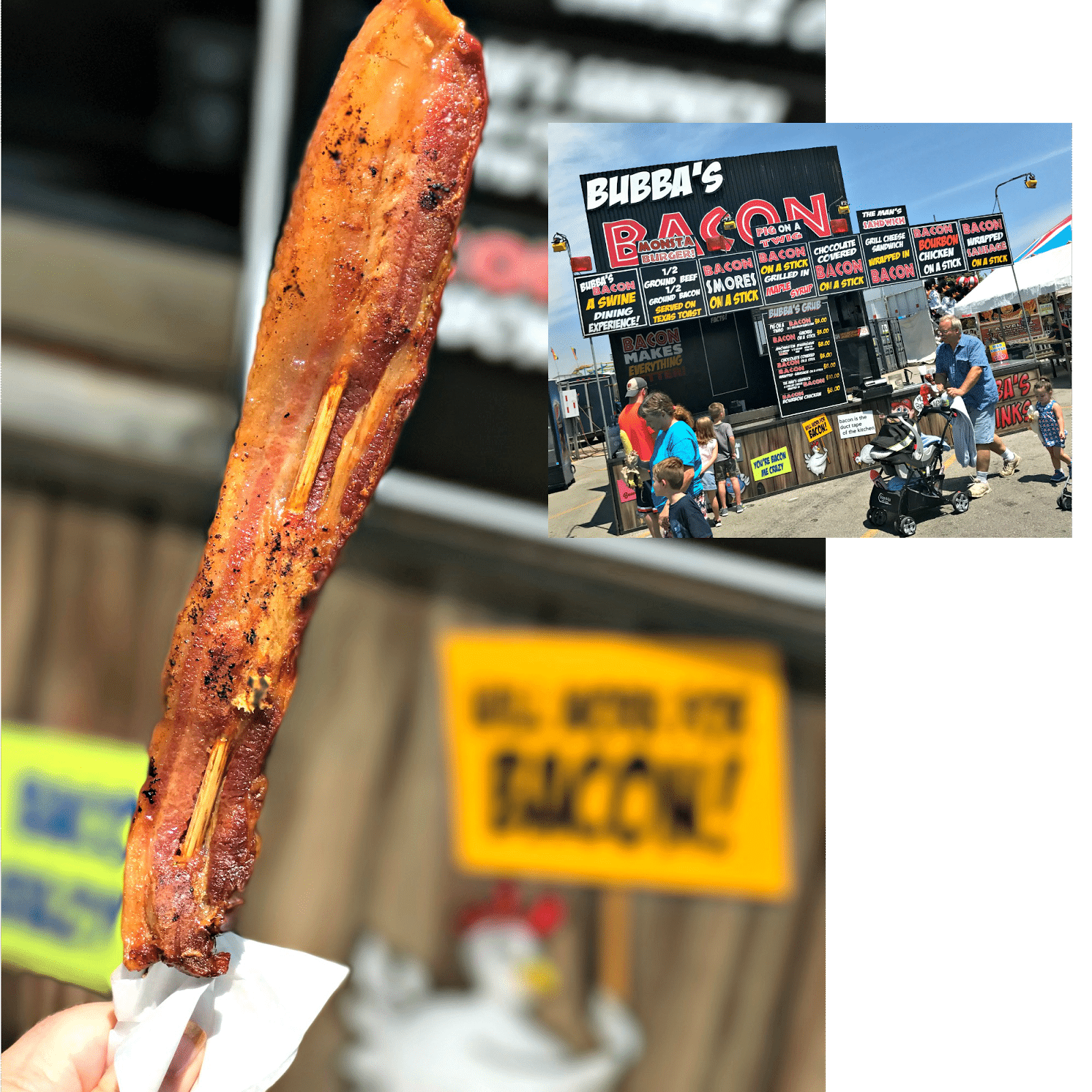 1. Pig on a stick – $5 – Bubba’s Bacon near the ticket booth and the Meijer Kiddieland

This is the mecca for bacon lovers (ahem…Bob Herzog). I went for the simplest thing on the menu – a large thick slice of bacon that was dipped in maple syrup and fried. I loved that the bacon was so thick and not overly sweet. Cheese curds are an Iowa staple – but for some reason – they aren’t on every menu in every bar & grill in Ohio??? So when I saw there was a whole booth just for cheese curds – I had to get some. They’re super salty and the batter is light. Fried, cheesy, goodness. 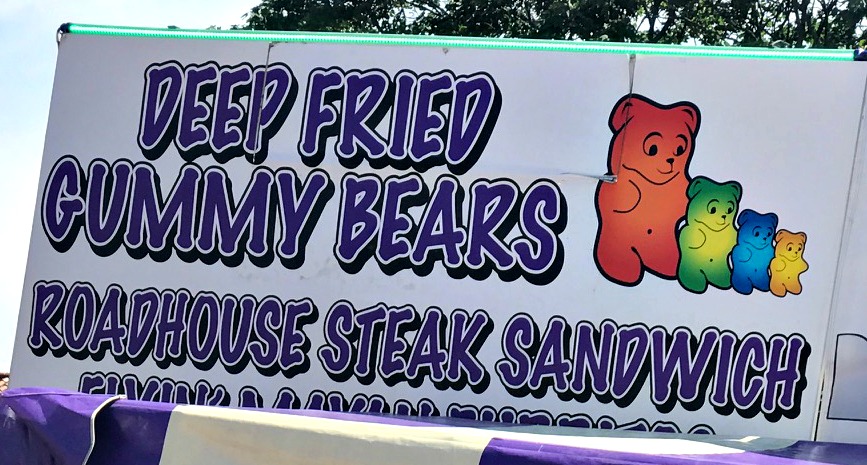 3. Deep Fried Gummy Bears – It’s a big purple & white booth – I thought it was on the North end but the Food Finder says it’s at the South end – so keep your eyes peeled for that sign.

I didn’t try this one because I was on a quest for Deep Fried Koolaid and Deep Fried Butter – unfortunately neither could be found. So the Food Finder is helpful but not 100% accurate. Anyway – it sounds interesting – I’m guessing the gummies get liquified a bit from the deep fry which should be good! 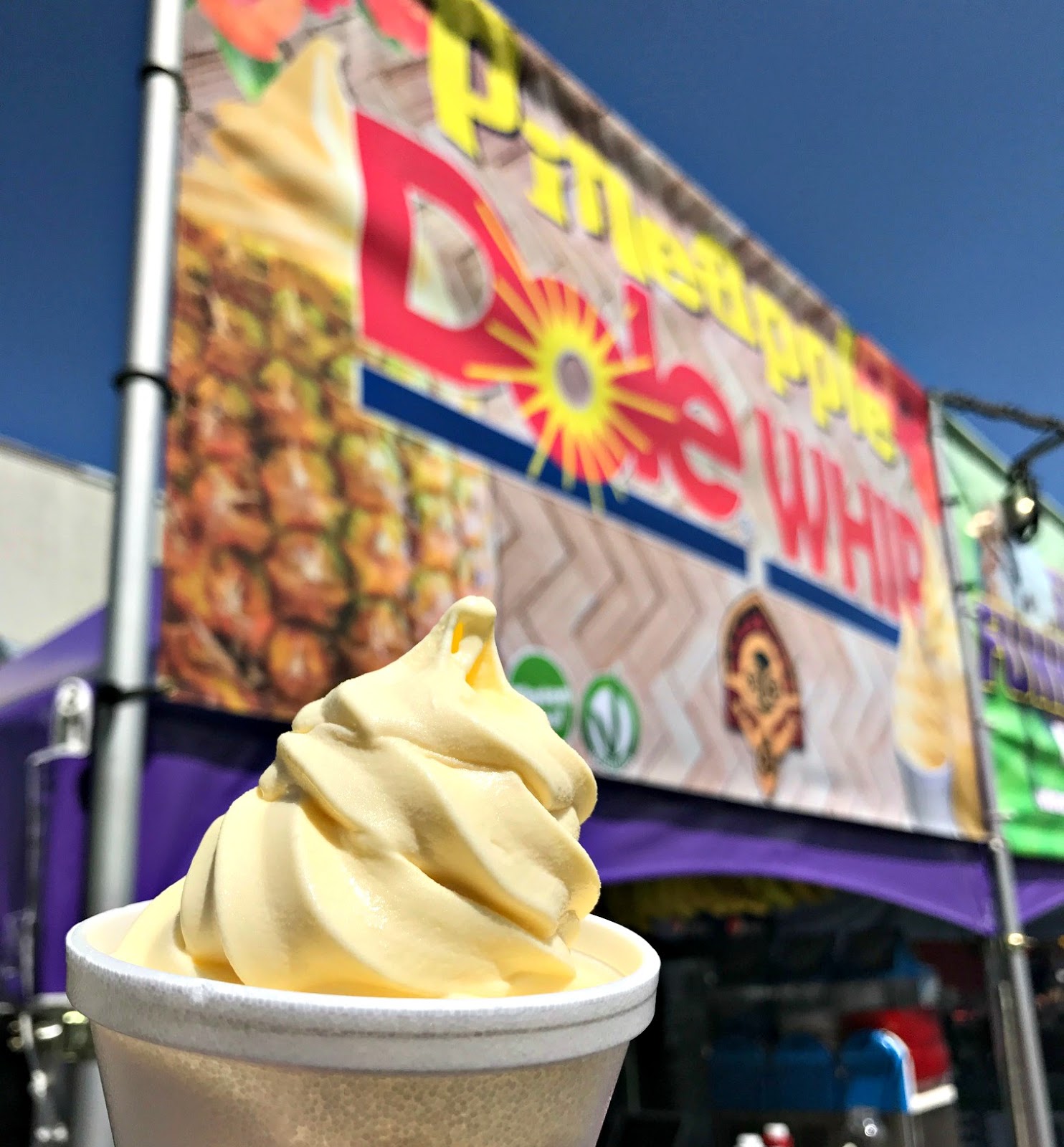 4. Dole Whip – $4 – In a row with Bourbon Chicken near Taft Coliseum and Central Park

This is the Blue ice cream of the Ohio State Fair. It’s a light and slightly icey pineapple dream. This was by far my favorite of the day. It’s a soft taco with ground beef, tomato, lettuce, onion and cheese toothpicked together, deep fried and then topped with salsa & sour cream. It was also really delicious. I would definitely get one of these!!! 6. Baby Elephant Ear – $5 – The Berry Barn on Cardinal Plaza between Lausche Youth Center and AmeriPark
I remember getting elephant ears as a kid and this took me back. It was honestly a little thicker than I remember – but still delicious. Hot and covered in cinnamon and sugar. 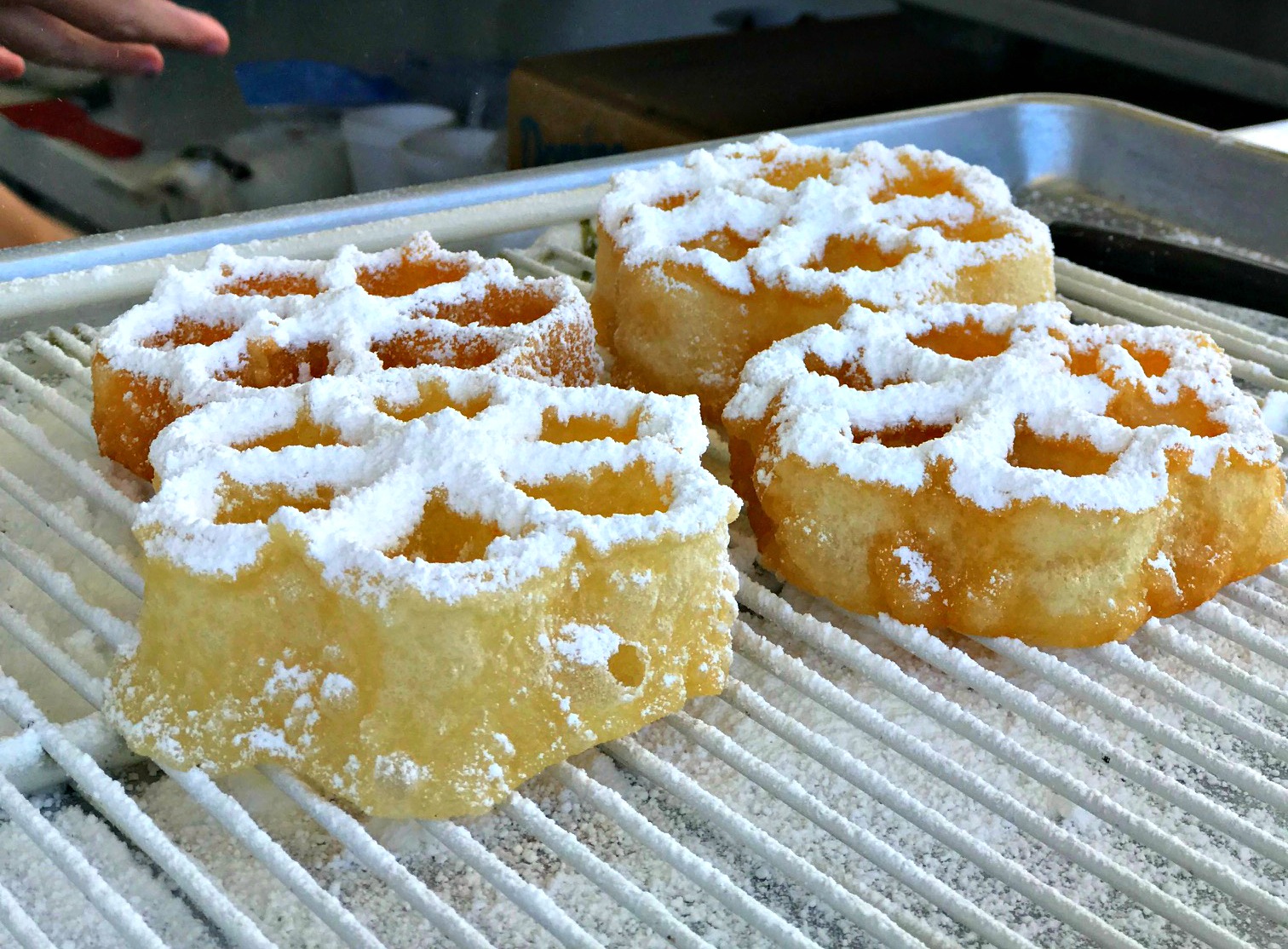 They also had these French Waffles that were light and crispy and covered in powdered sugar. Yes please! 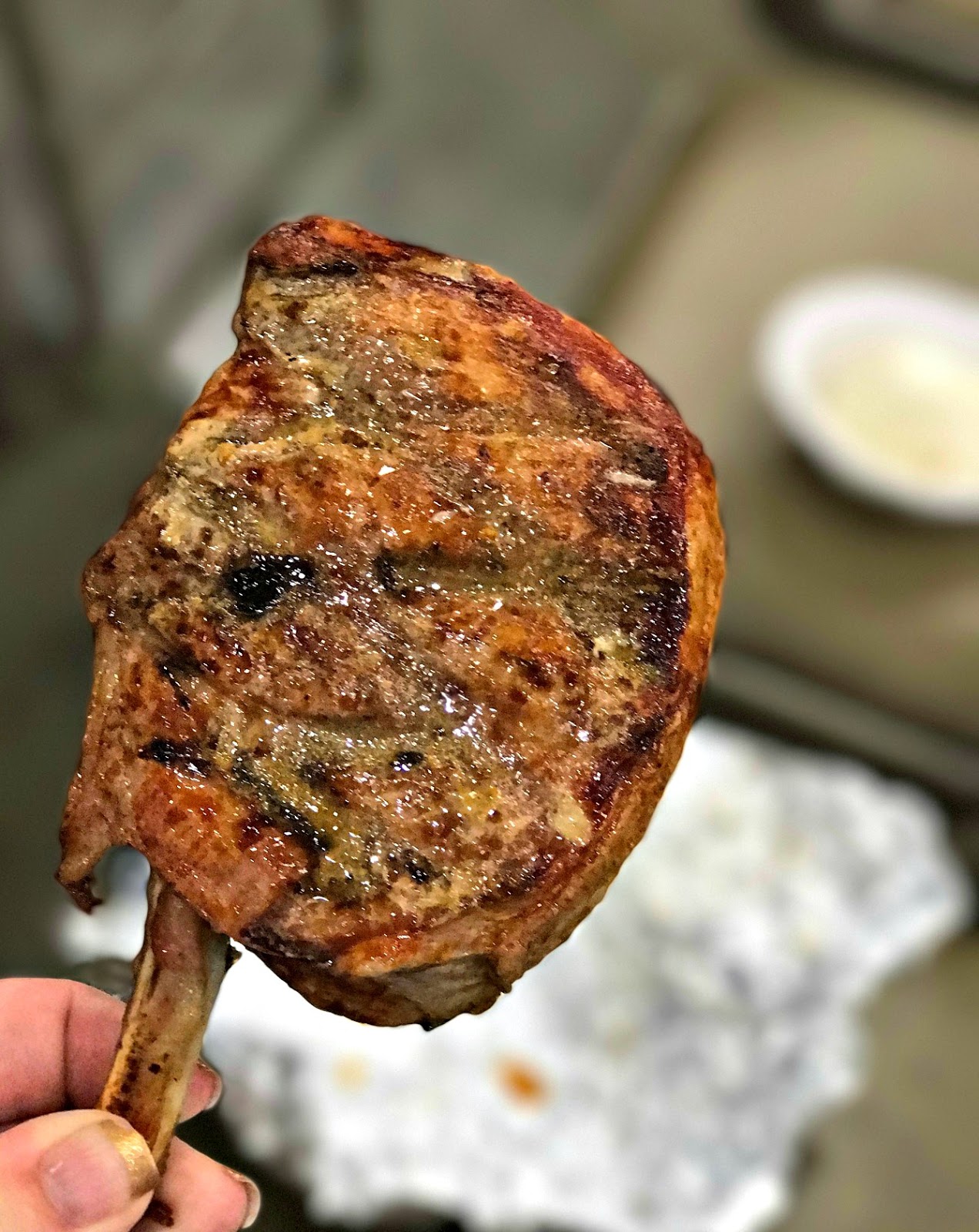 7. Pork Chop on a Stick – At the Ohio Pork Booth near the Butter Cow

New to the fair this year is the Pork Chop on a Stick – the stick is actually the bone of the chop. And leave it to Ohio Pork to cook it PERFECTLY! (145 degrees with a blush of pink!) This is by far the juiciest chop I have ever had!

If you’re in the Taste of Ohio Pavilion – don’t miss the Hog Wings from Ohio Pork – another amazing piece of meat. I saw no less than four booths with tater tots – it’s apparently the new cupcake! I was beyond full by this point in the day – but I chatted with the friendly worker and asked what their best seller was and he quickly said the Philly Tots – tots with sliced ribeye, green peppers, onions and white cheese. Sounds totlicious! 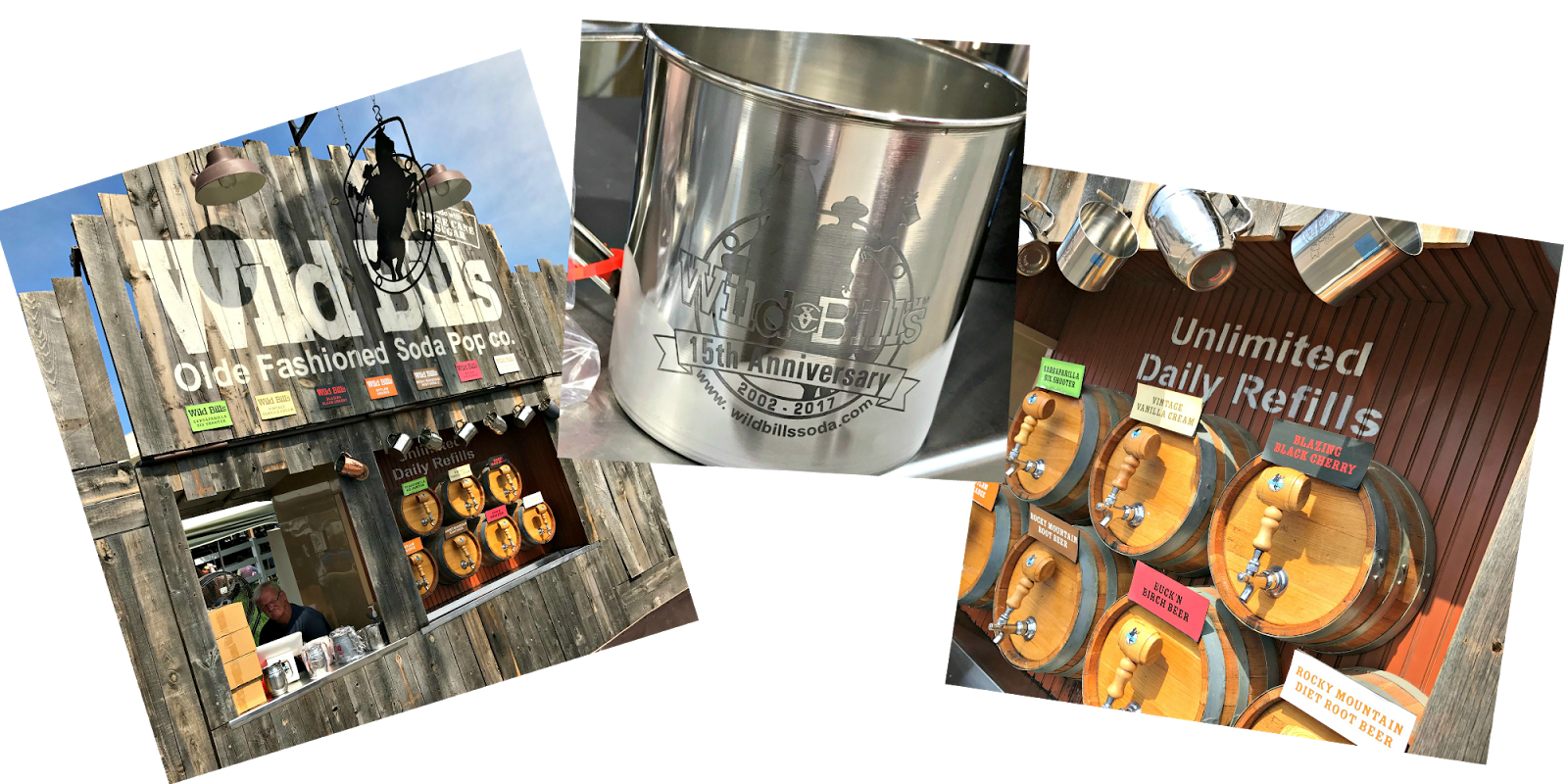 I’m not big on these old fashioned sodas but Larry is. The price is steep but you keep the mug and can refill it all day – so if you love it – it’s a good deal. Also – there are multiple booths so you don’t always have to run back to this one. We tried the Vanilla Cream and I liked it! (I had cream soda normally.) They have other mugs that run up to $30 – this was the cheapest. 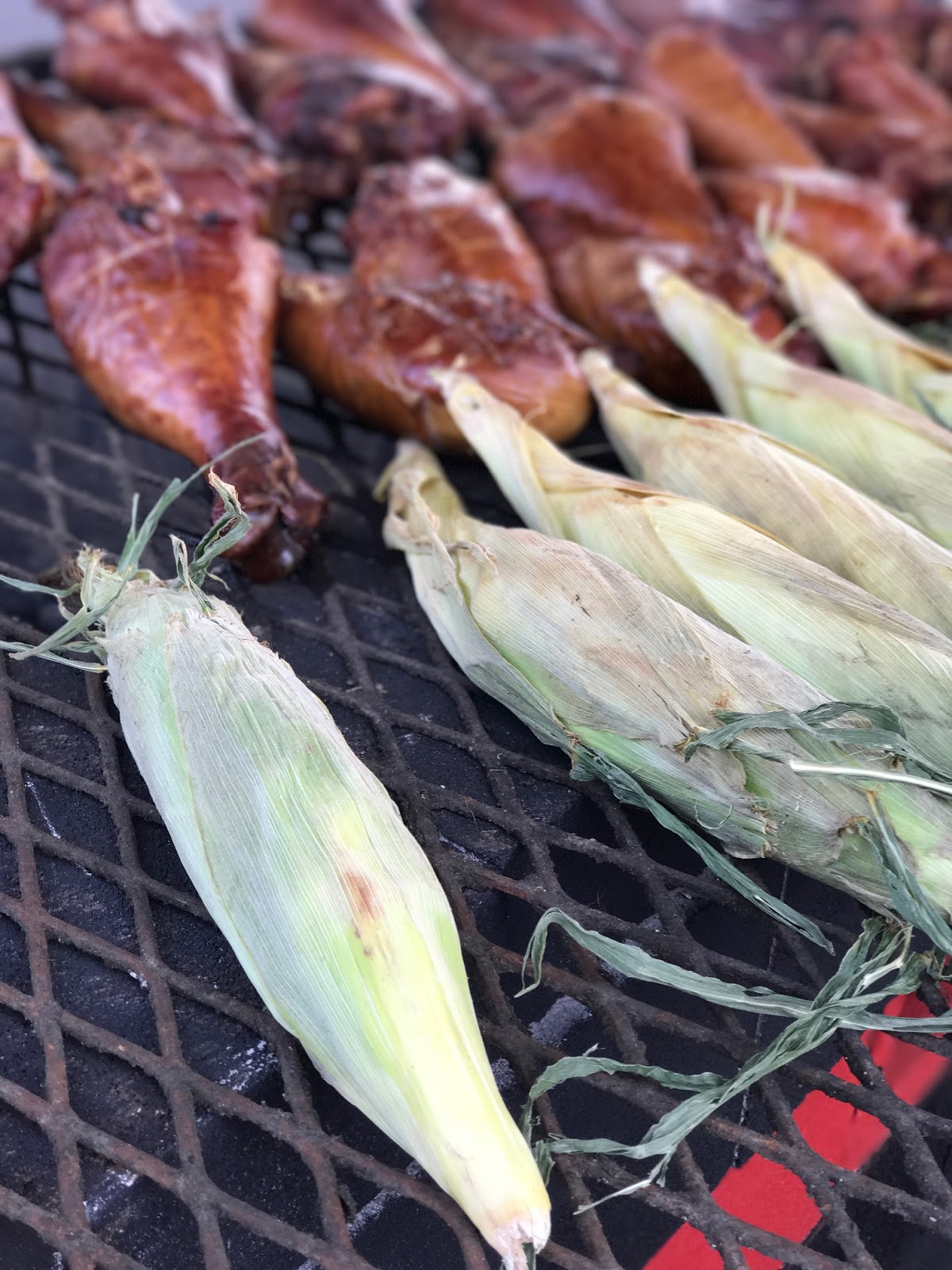 There are multiple places where you can find these two State Fair Staples and if you haven’t had them – you must. A grill full of delicious. 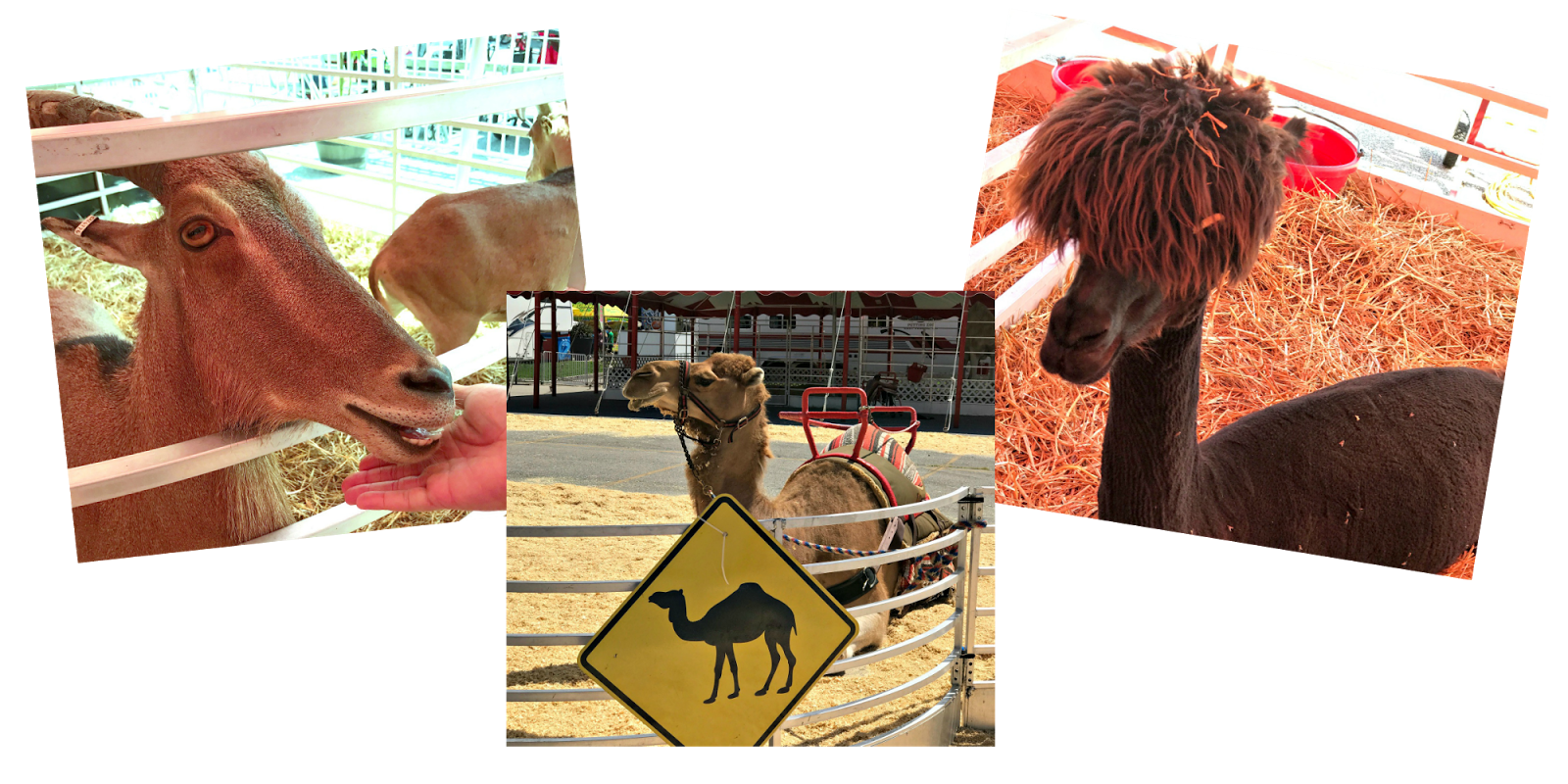 We also enjoyed seeing some animals – there was a petting zoo (the gal on the right is sporting the Hussy Hairdo of every Sunday morning!), camel rides (not loving this but I haven’t seen a camel that close up), pig races and more. 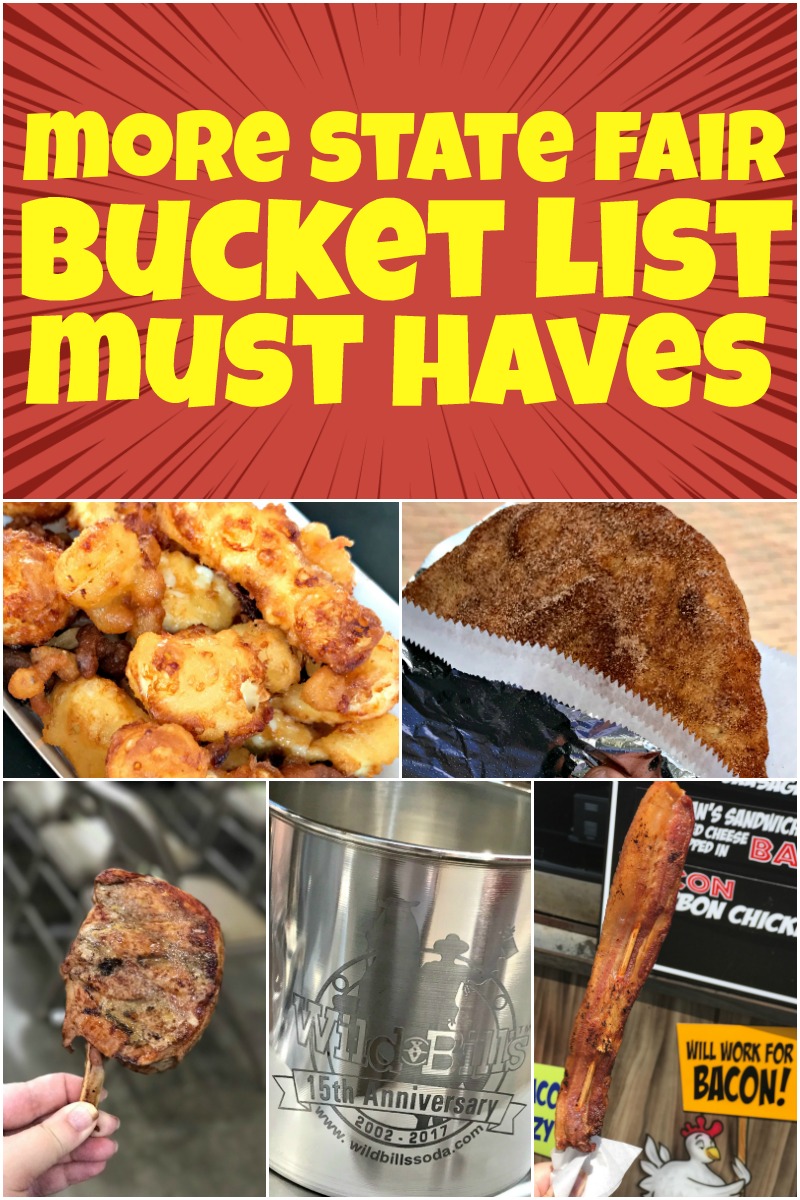 So there you have it – a whole new list of State Fair Foods to try! If you only try one thing – I would go for the Deep Fried Taco!