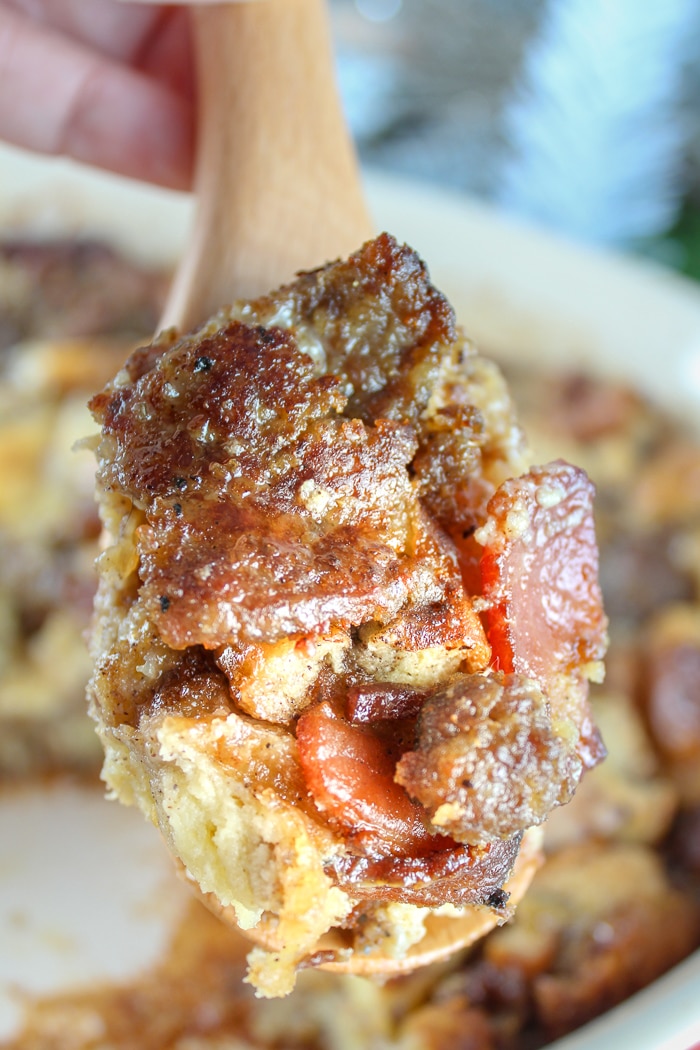 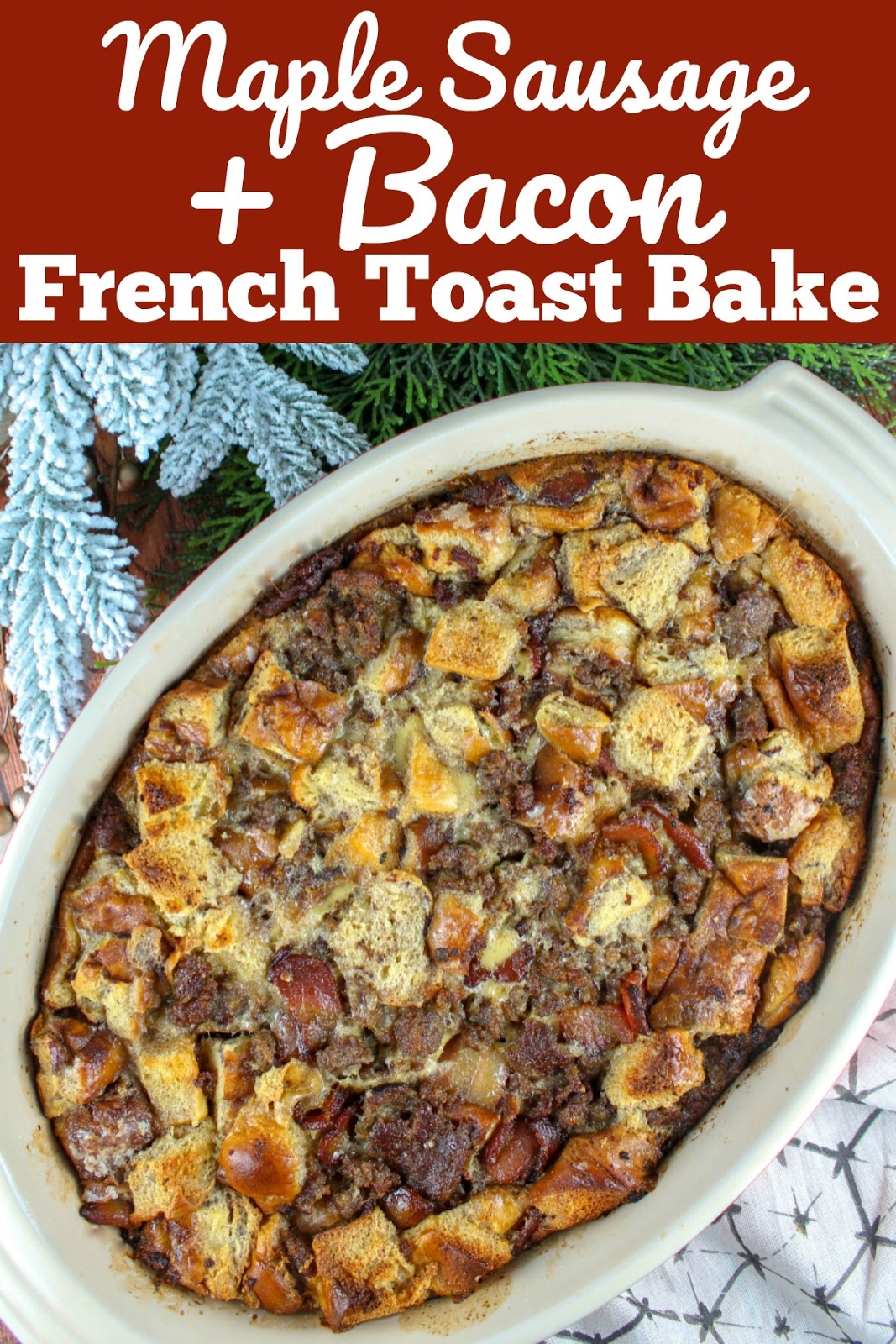 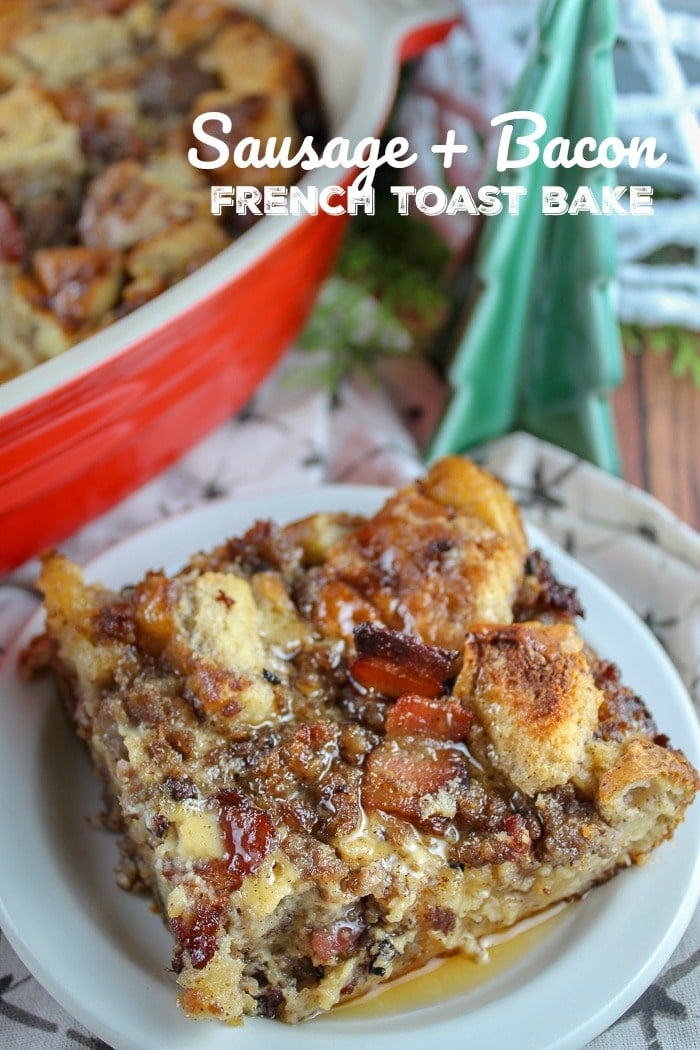 With the holidays upon us, I have been dying to make a big ol’ breakfast casserole – that could feed a bunch of people. I settled on doing a cinnamon french toast bake – but you know me – I can’t JUST do cinnamon french toast! I had to add bacon AND maple sausage! Yum!

This is a super simple breakfast to put together and it’s a french toast bake without having to leave it sit overnight. I really don’t eat much bread – so I didn’t want to buy a whole loaf of bread – so I bought some giant cinnamon donuts from Meijer (using Shipt of course) and used those!

This casserole is so delicious and is great for any family gathering or just a big brunch!

How do you make french toast casserole?

French toast casserole – or you can also think of it as a breakfast bread pudding – is really simple!

I love that this french toast casserole recipe is very flexible – you could use different kinds of bread, add fruit, leave out the pumpkin pie spice and use cinnamon & apples if you like – so many ideas!!!

This French Toast bake is the perfect breakfast for Christmas morning! You’re all warm and cozy and this is perfect to get you through the excitement of opening presents – but tide you over until your big dinner that afternoon or evening.

This easy french toast bake is made with no flour and no sugar. I love how simple it is – After you brown the sausage and cook the bacon – you can have it together in just a few minutes! Be sure to undercook your bacon a little – mainly you just don’t want it crispy – because it will continue to cook a little when you bake it.

Other Breakfast Ideas for a Crowd

This maple sausage and bacon french toast bake is so delicious – I promise the whole family will love it! But if you want some other options for a big family breakfast – here are some of my favorites!
– Breakfast Gumbo
– Loaded Farmhouse Breakfast Egg Casserole
– Copycat Sunliner Diner Corned Beef Hash
– Baked Scrambled Eggs 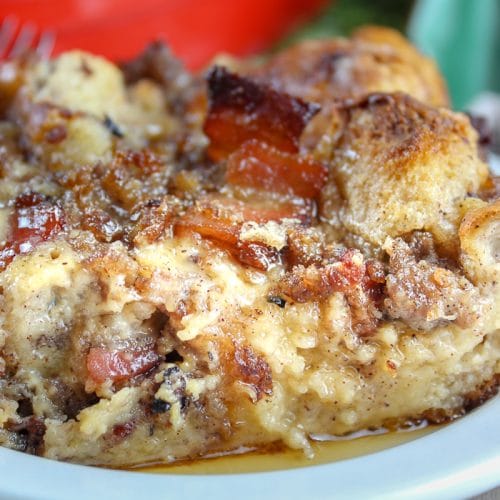 If you’ve got a crowd for breakfast, this French Toast Bake is just the dish! It’s like french toast kicked up about 10 notches! Filled with maple deliciousness as well as bacon AND sausage – there will not be ANY leftovers. And…it is SUPER EASY!
No ratings yet
Print Recipe Pin Recipe
Prep Time 10 mins
Cook Time 45 mins
Total Time 55 mins
Course breakfast, brunch
Cuisine American
Servings 8 people
Calories 520 kcal

– You can use any variety of sweet breads for this french toast bake – I love these giant cinnamon glazed donuts that I get at Meijer – they’re usually 4 for $2 – but you can use whatever you have or like – regular glazed donuts, Hawaiian bread, etc. You need about 5-6 cups of largely diced bread.
– Not a fan of sausage or bacon? You can just use all bacon or all sausage. If going with all bacon – I would double the bacon to 6 slices.
– Be sure to UNDERCOOK the bacon a little – you don’t want it crispy – it will continue to cook when you bake it.
– Splurge and use real maple syrup – it’s worth it!