I heard rumblings of a farm-to-table restaurant in Milford and had to check it out. Lucky for me – it’s only 10 minutes from my house and right by the dog park! So what is it? 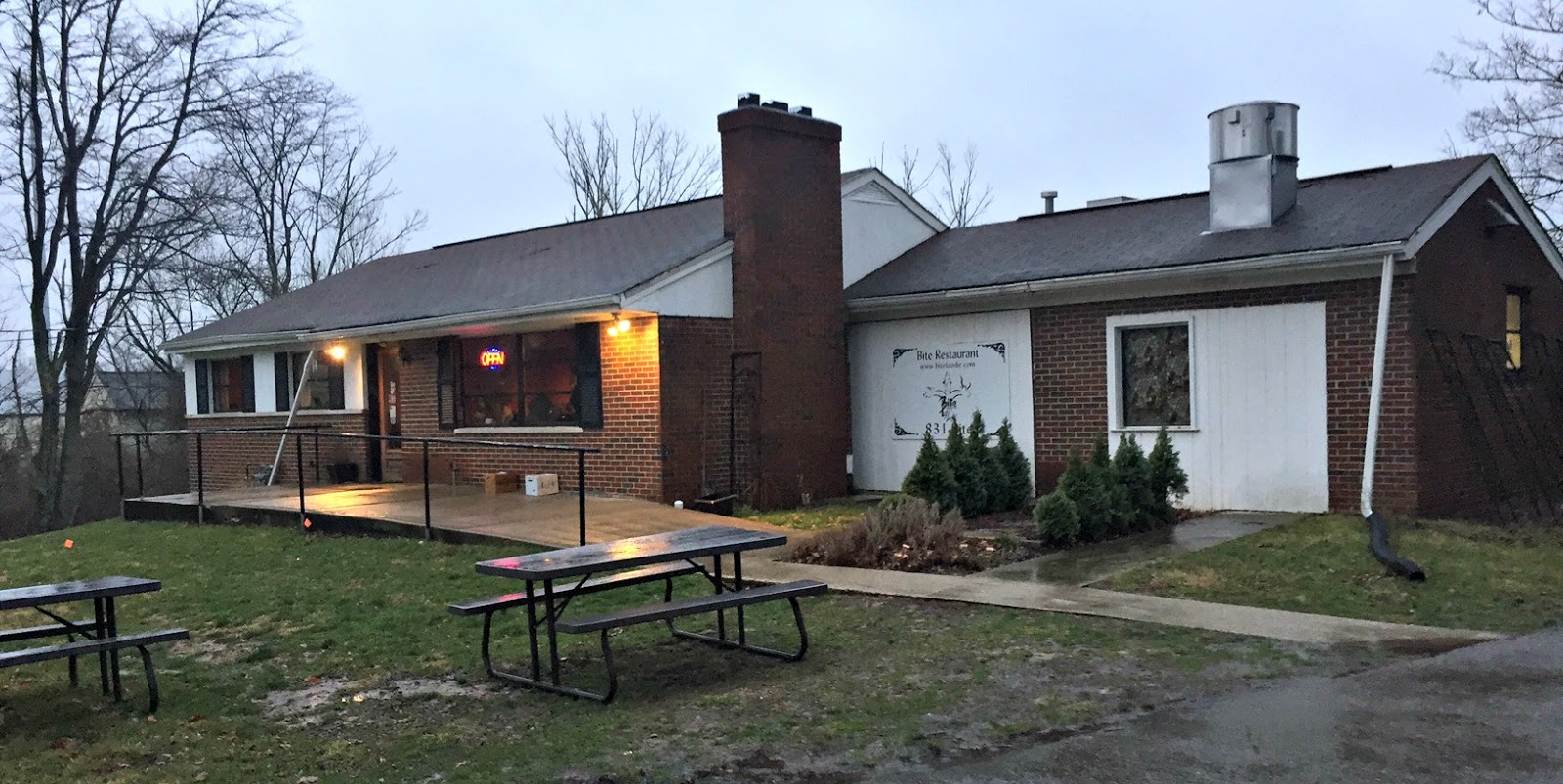 It’s called Bite Restaurant and it’s on 131. It’s a converted house that sits back off the road and is in a semi-commercial district. 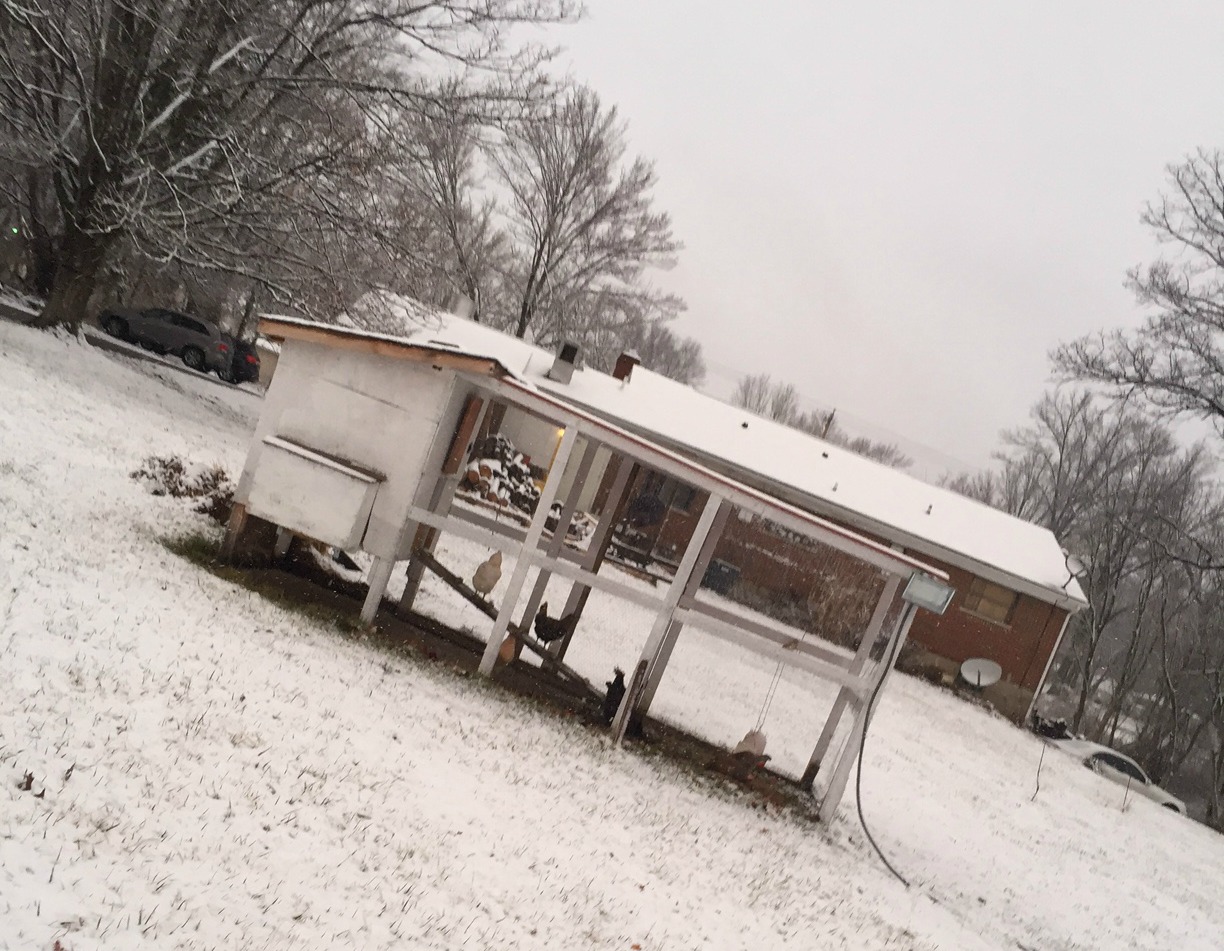 I’ve been a couple of times – there’s a chicken coop in the back and planting beds in the front. On one visit they had the smoker going and they were making bacon! (Yum!)

As you can tell from the two pics – I’ve been twice – once was in early March and the other in late March – thus the snow. 🙂 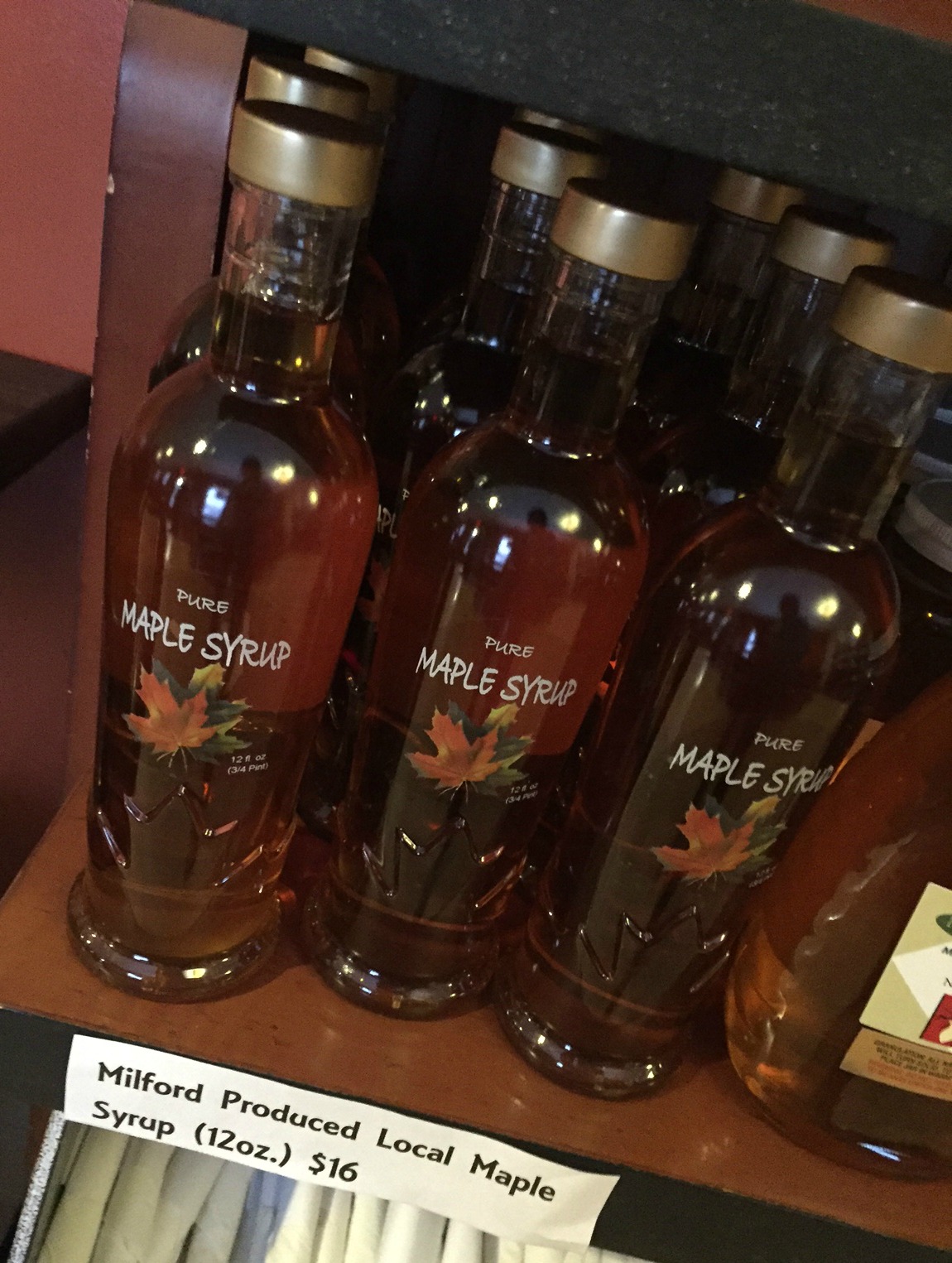 Inside the restaurant they also have products for sale – it’s a lot of artesan, local products like this Maple Syrup. They also have teas, soaps and a lot of unique products. 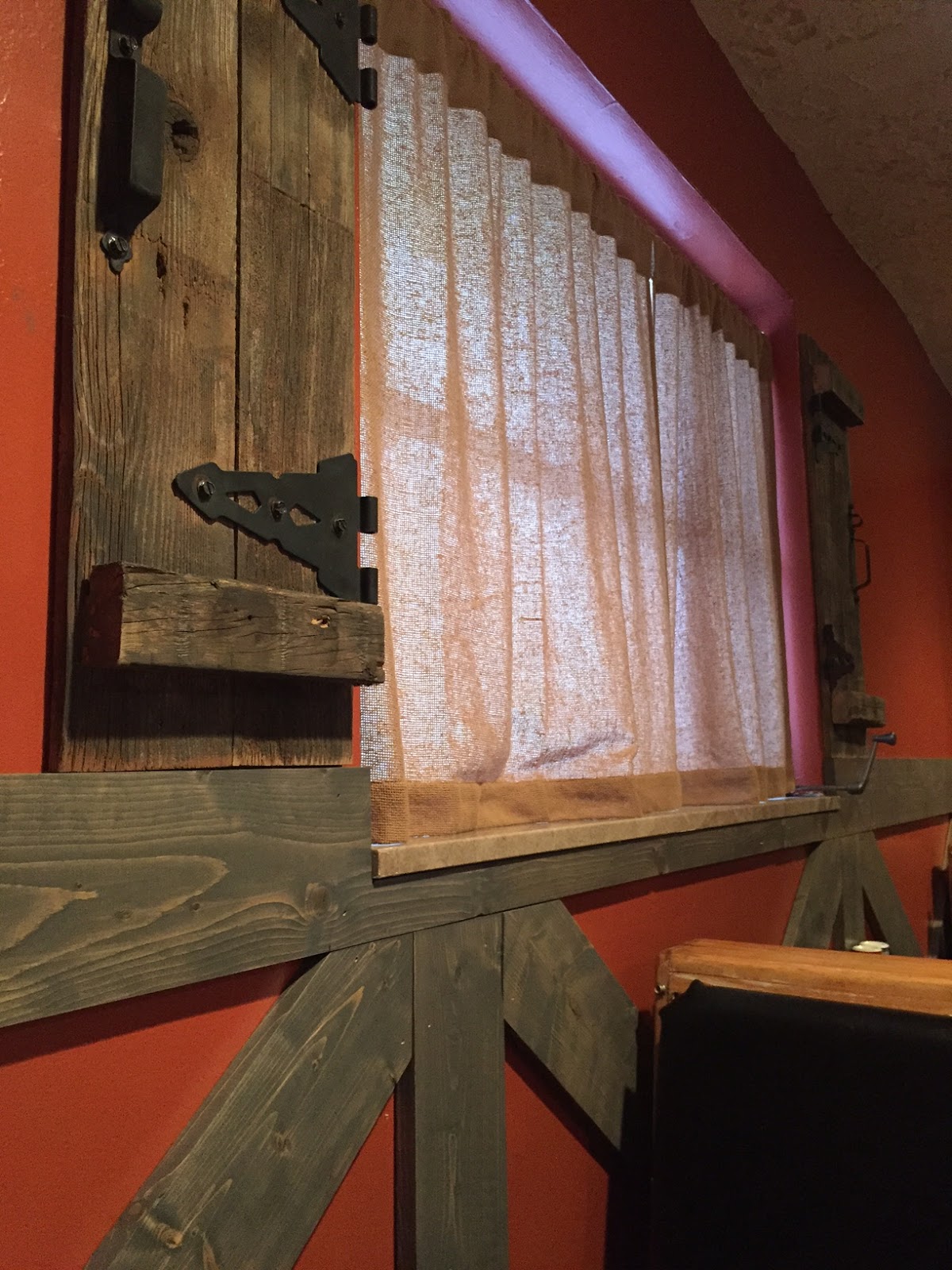 Inside is a farm type of atmosphere – but you can totally tell it used to be a house. The atmosphere is quirky – it’s not the most polished or well done but at a point – it doesn’t really matter – the food is what matters! 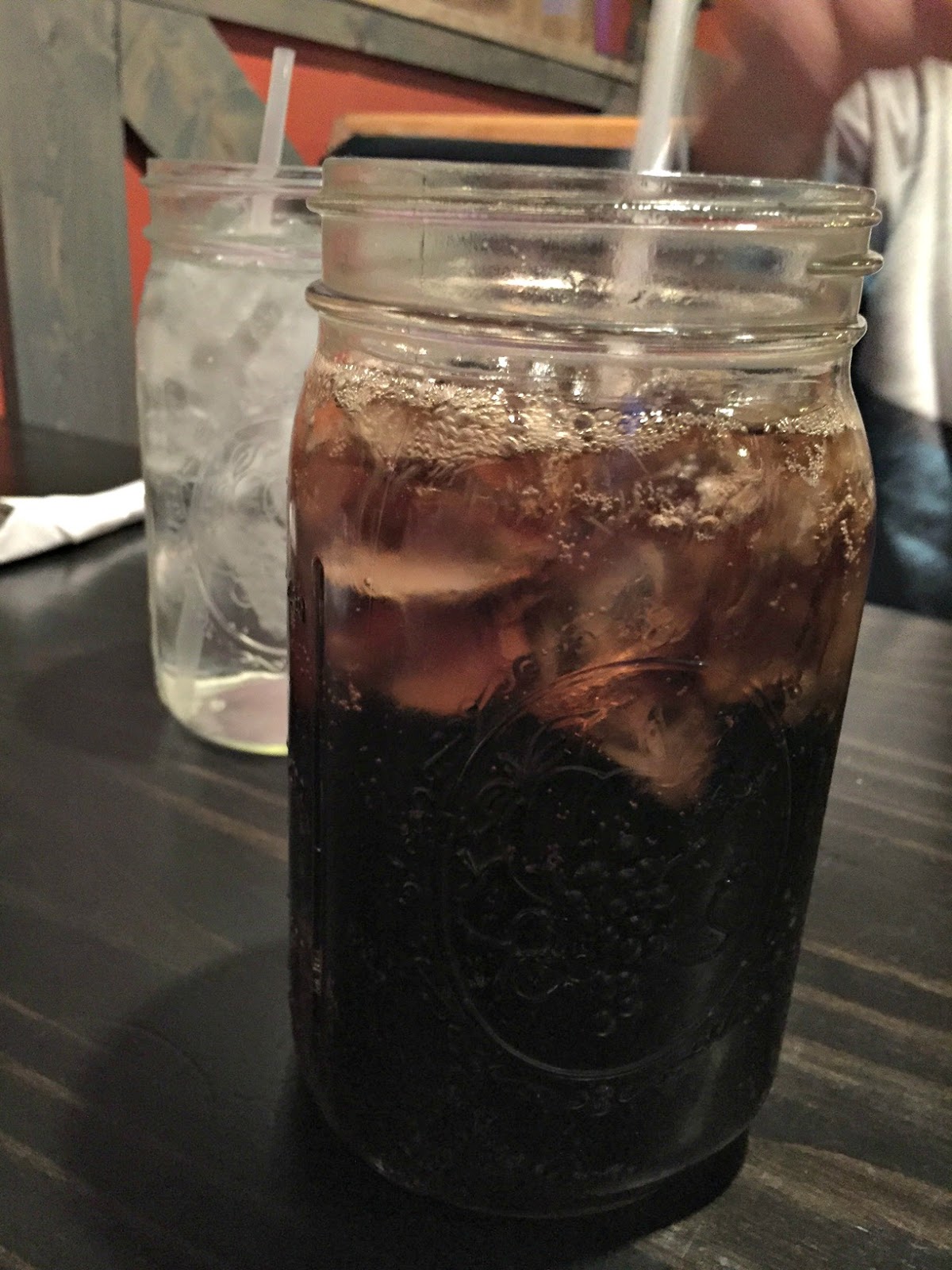 It’s a rustic atmosphere and they serve the drinks in mason jars – which Larry loves. They were the big quart jars too (can’t tell from the photo). 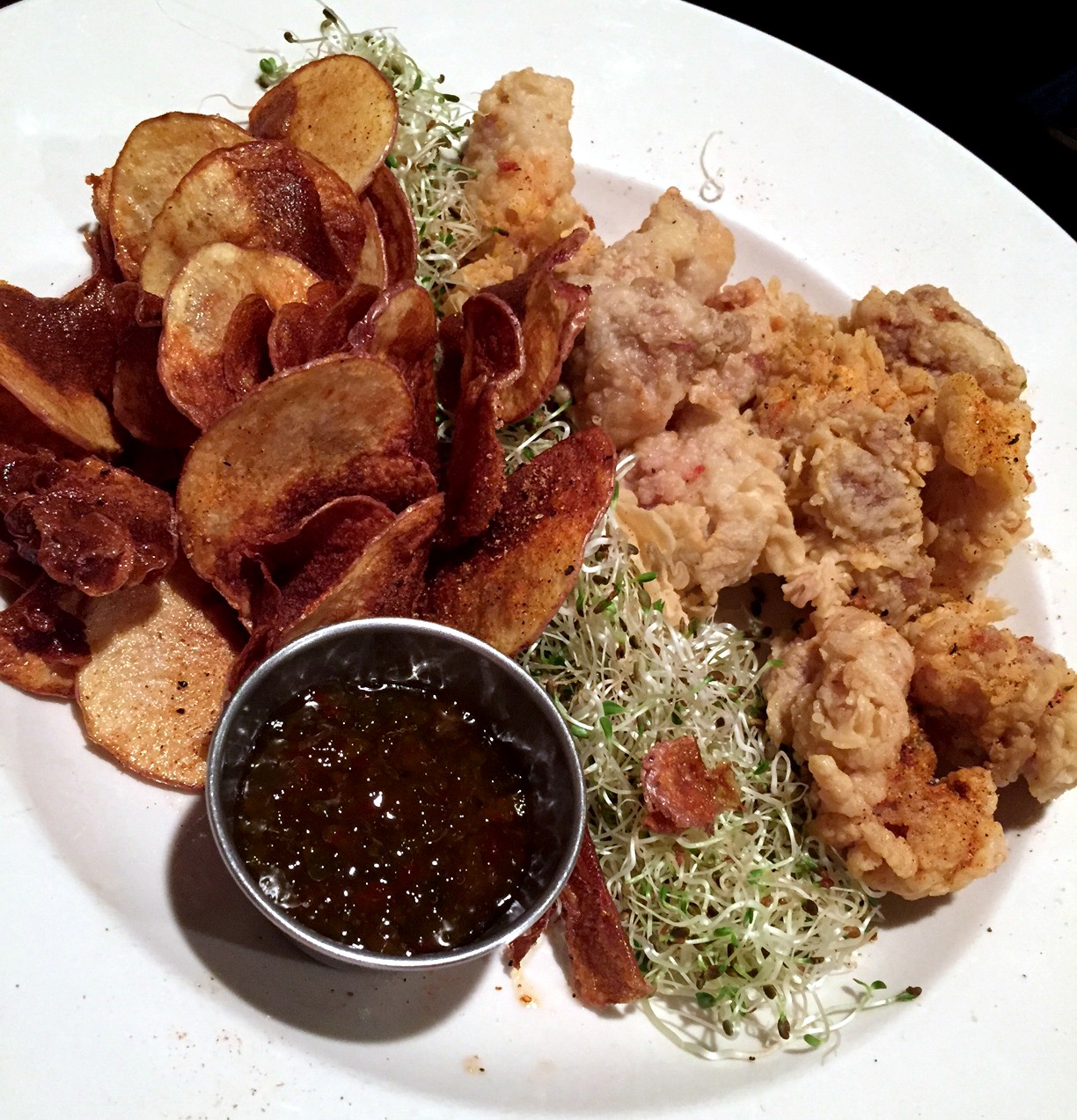 We started with the Crispy Alligator appetizer ($12) served with homegrown potato chips and pepper jelly. 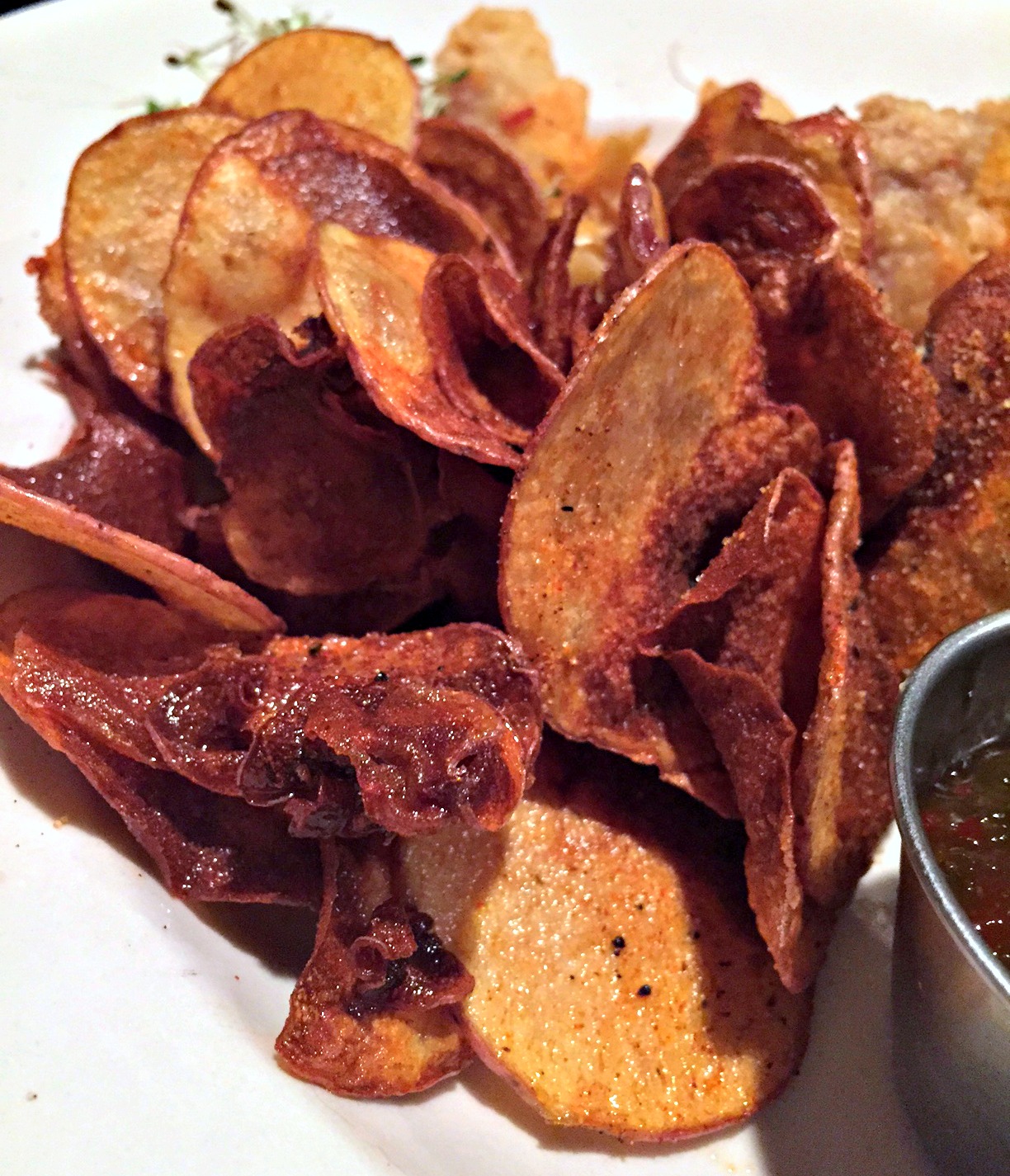 I cannot say enough about these chips – like seriously – AMAZING!!!!! They reminded me of the spiral cut chips you can get at the fairs during the summer. They’re super thin and so crispy and salty. It took every ounce of control for me to not devour these in 30 seconds. 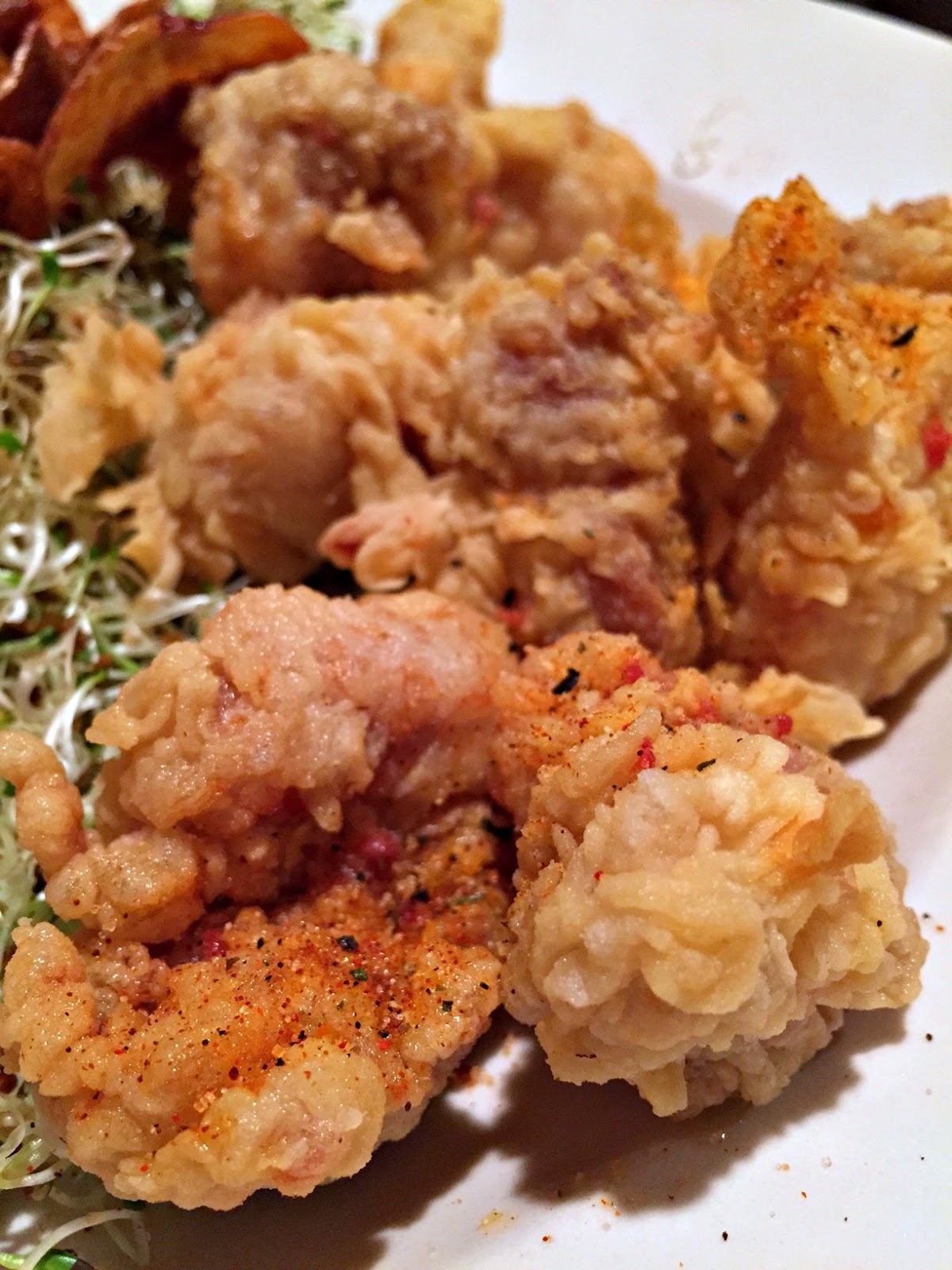 Then there was the Alligator – if you haven’t had alligator – it’s very unique. It it’s definitely like you mixed fish & chicken. It’s sort of got a thick whitefish texture but is a little chewier with a texture like chicken. It’s breaded with a really light breading and then sprinkled with a zesty seasoning.

Larry had alligator once at Andouille (now closed) and really liked it so he was excited to try it again. This was really good – so good – we were going to get it again on our second visit but they were out! They get their alligator from Louisiana – it comes frozen but is direct from the area. 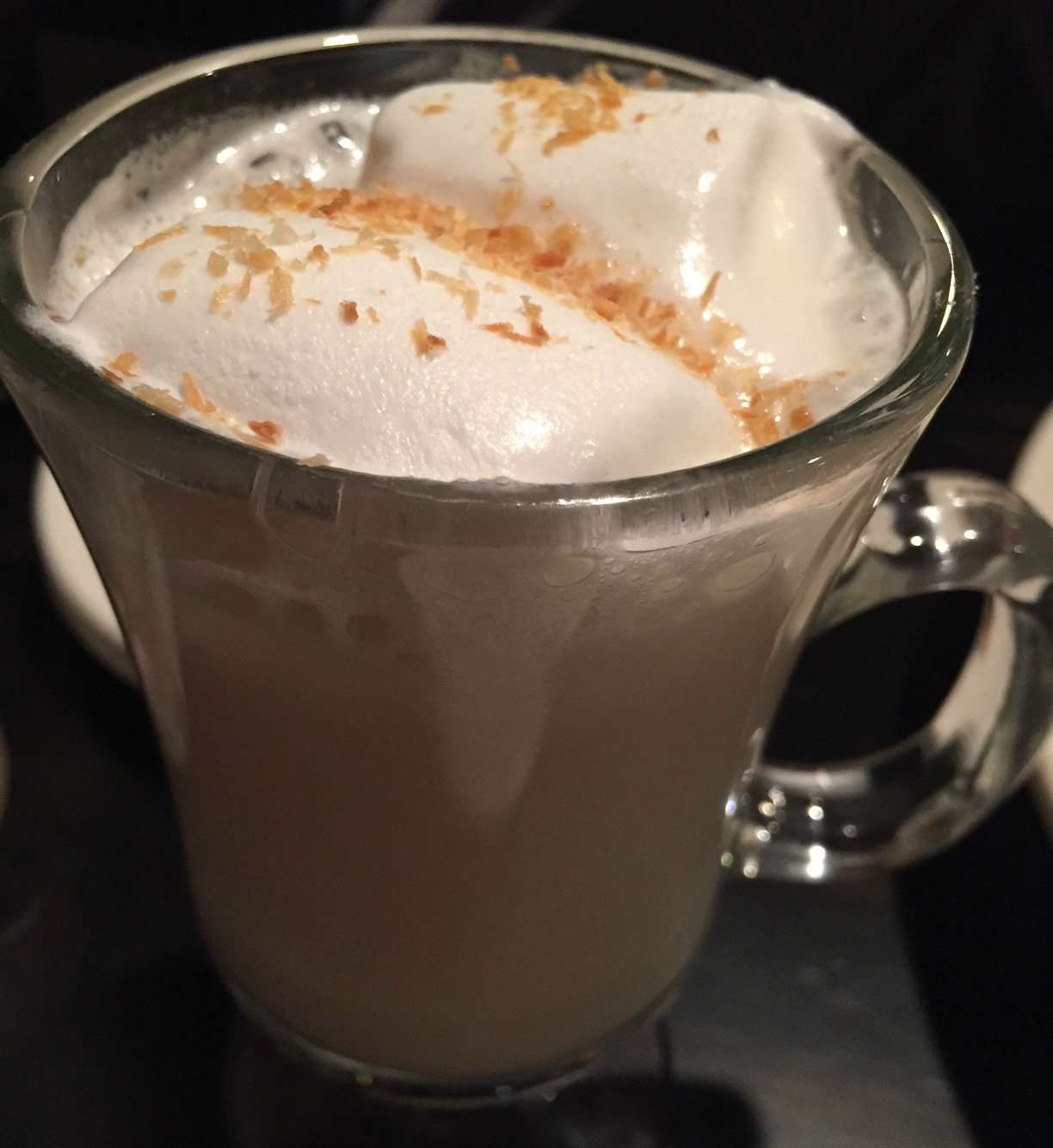 It was freeeeeeeezing and I was dying for something warm so I got their Alohaute Chocolate ($4)which is white hot cocoa with coconut. This was so freakin good – it was absolutely delicious and hit the spot. I love white hot cocoa anyway – but then the big marshmallows on top melting into it…sweet baby Jesus. 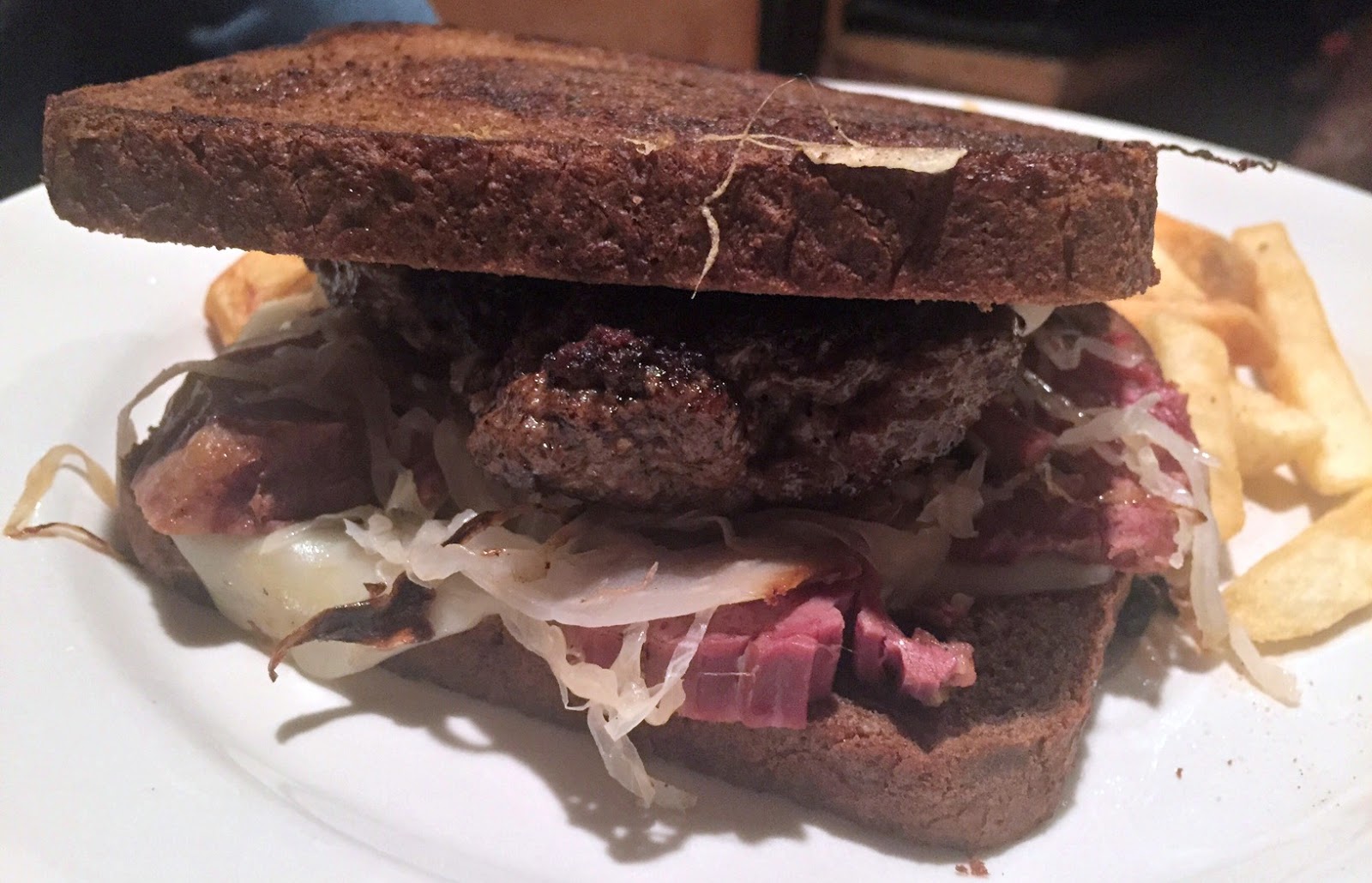 Larry went for a Reuben Burger ($13) with house-made corned beef, Swiss cheese and sauerkraut (no thousand island for him – allergies) all on top of a half-pound burger. That corned beef was super thick and just fell apart – it was so good. The rye was toasted too. All in all – definitely a good burger. (There’s a trend here – everything is good!) 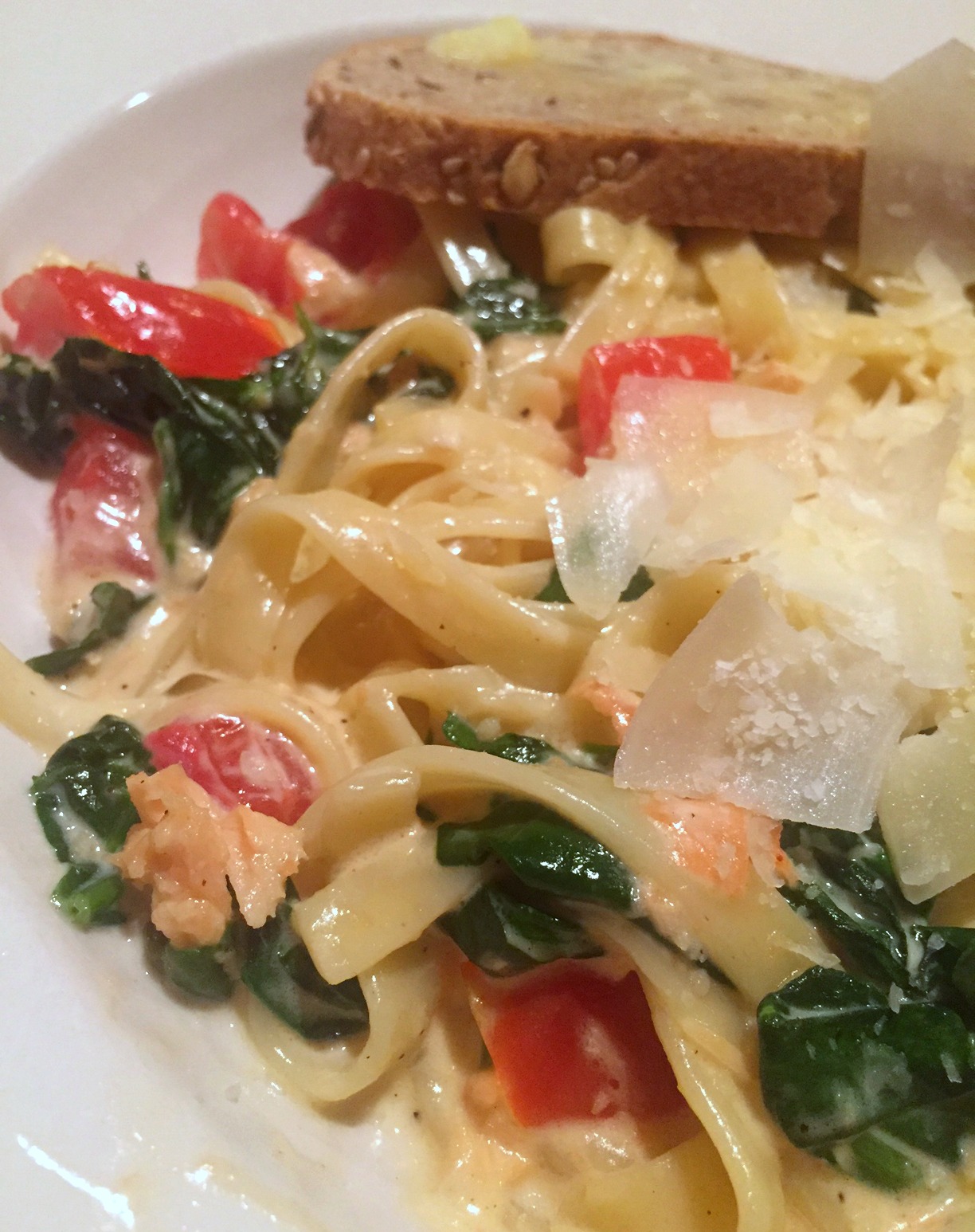 I got the Zymarika ($14) which is creamy fettucini, capers, smoked salmon, tomatoes, feta and spinach. (This dish can also be made gluten-free or vegetarian – they do that with a lot of dishes.) It’s also served with fresh baked bread.

I can’t even explain how good this is but I’ll try. I mean – obviously fettucini, cream, spinach, feta, capers and tomatoes – all sounds delicious – duh. But then – the smoked salmon – adds this whole new dimension and layer of flavor. It’s not overpowering at all – it’s just lucious and rich. I can’t say enough about this dish. The portion sizes are big too – I only ate half and then had the rest for lunch the next day.

On our next visit – I got barbecued chicken thighs and – gasp! – forgot to take a picture!!!! They were delicious and so were the seasoned veggies I got to go with them. 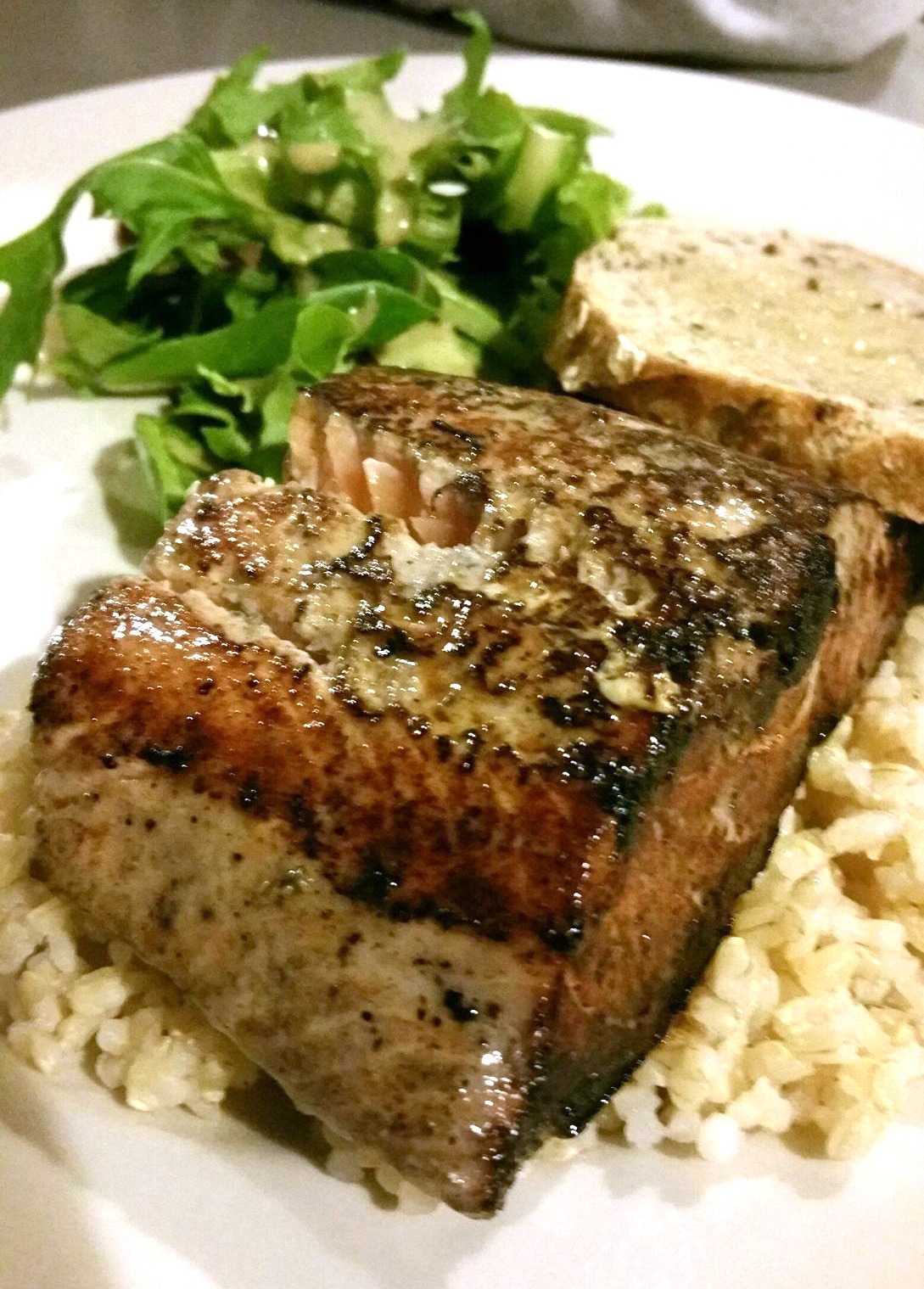 Larry got the Blueberry Maple Salmon ($14) served over brown rice with avocado cream. The salmon was cooked perfectly – although the blueberry maple flavor wasn’t very strong. Larry likes plain rice – if it had been my dish I would have liked some sort of sauce – or more sauce to tie it together. There was also a little side salad with it. 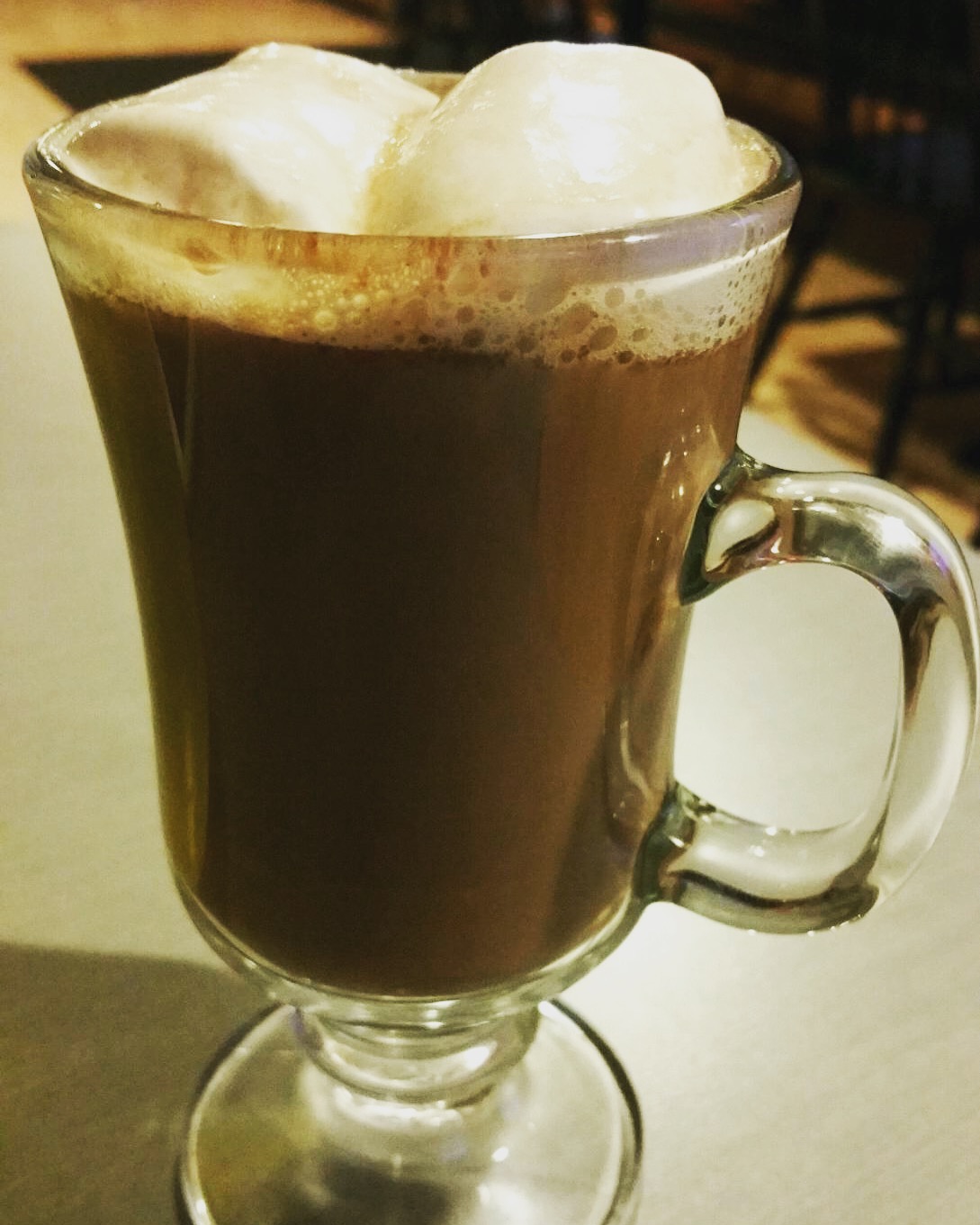 Larry was also jealous of my hot chocolate from the first time and went for the Mexicocoa ($4) which had chili and cinnamon in it.

Why Should You Go? Um – because everything is delicious. Don’t even let me get started on their salads – here’s one to give you an idea:

Yeah – THAT is a salad! I’ve heard their desserts (like Homemade Bourbon Pecan Ice Cream) are also fantastic but I’ve been avoiding them.

I sure hope I’ve convinced you – oh wait – I forgot one more thing – it’s BYOB!! There’s a drive-thru liquor barn across the street – so grab some beers on your way in!