Subscribe
For years my husband has been bugging me to go to P.F. Chang’s – it’s just never when we’re hungry or when they’re swamped. Finally – we found time for it! We were at Mitchell’s Fish Market a couple of weeks ago and found the one in the same shopping mall in West Chester so we made a mental note and headed back! 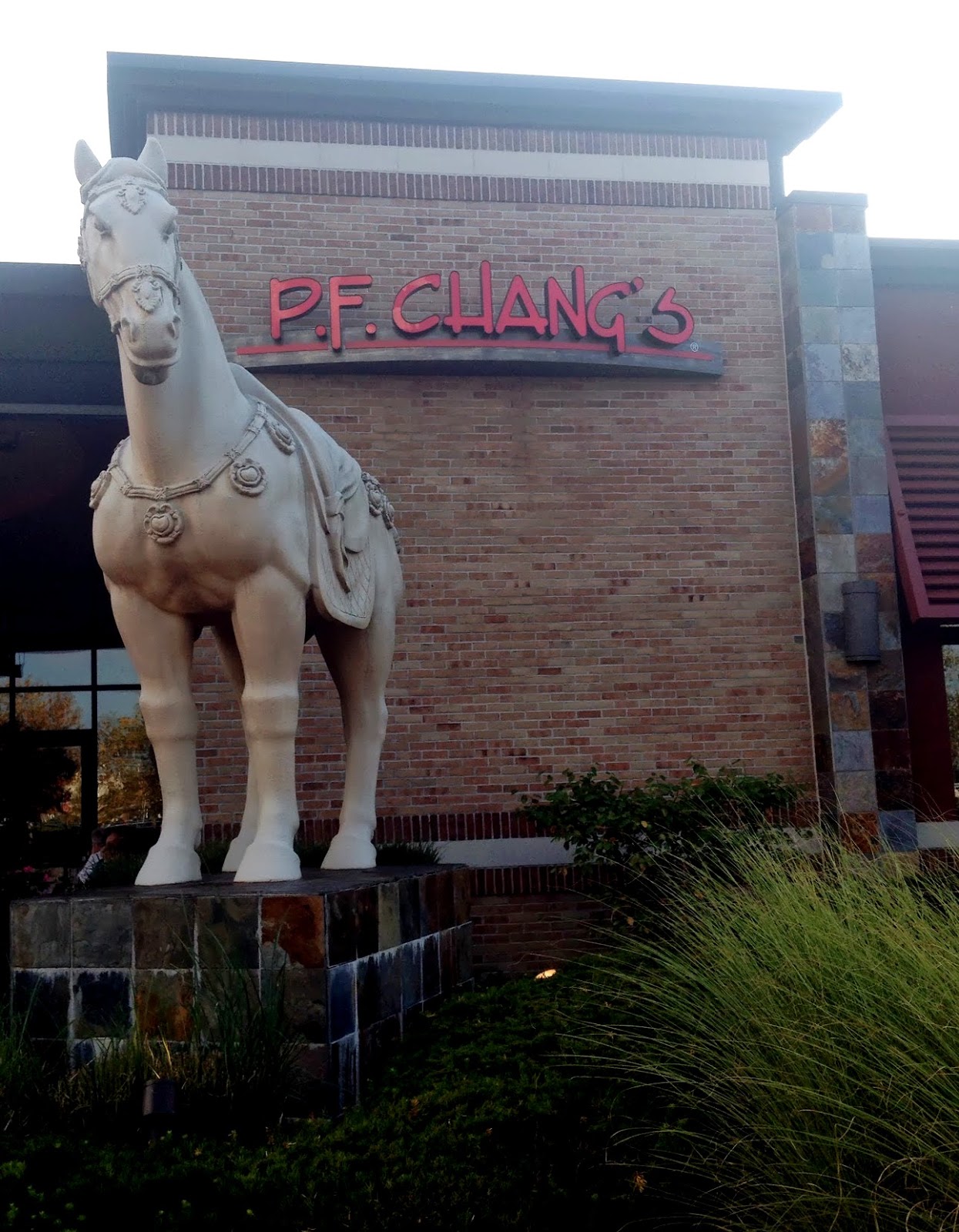 I wish it were a real horse. 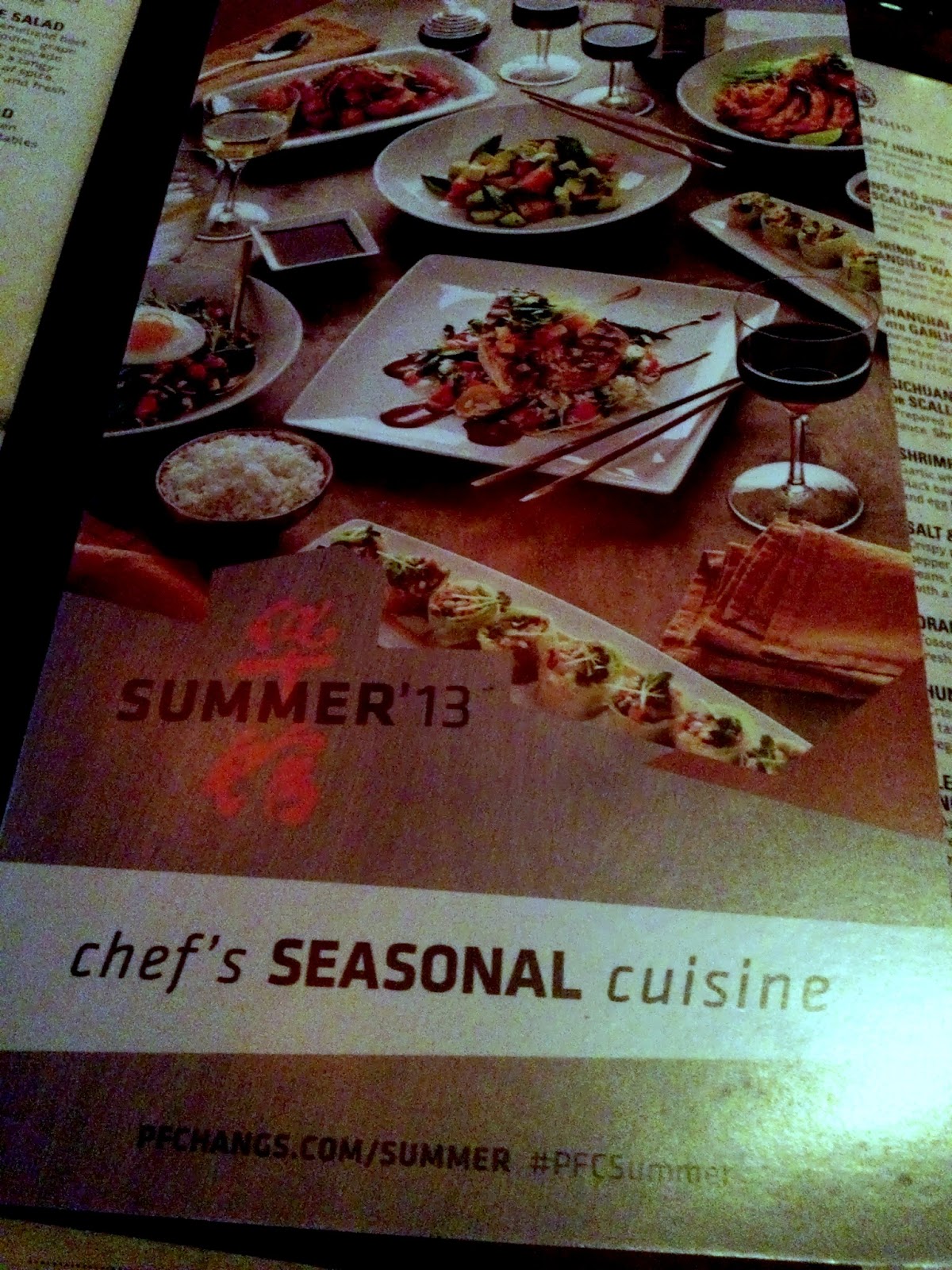 In addition to the regular (yummy) menu – they have a special summer menu that we wanted to try something from. I think this will be good through September. 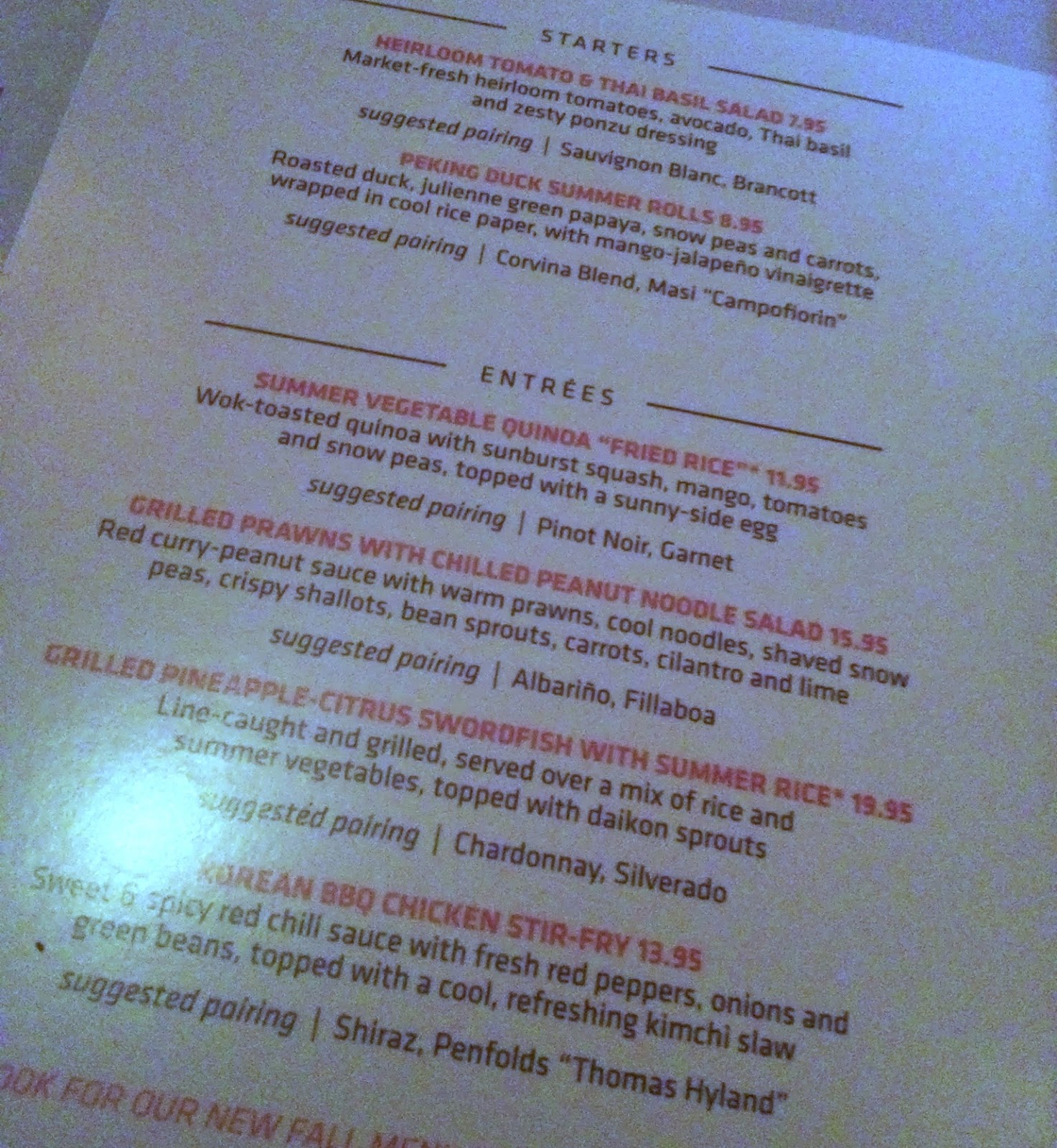 I was really torn between the chicken and the swordfish – what would I choose??? 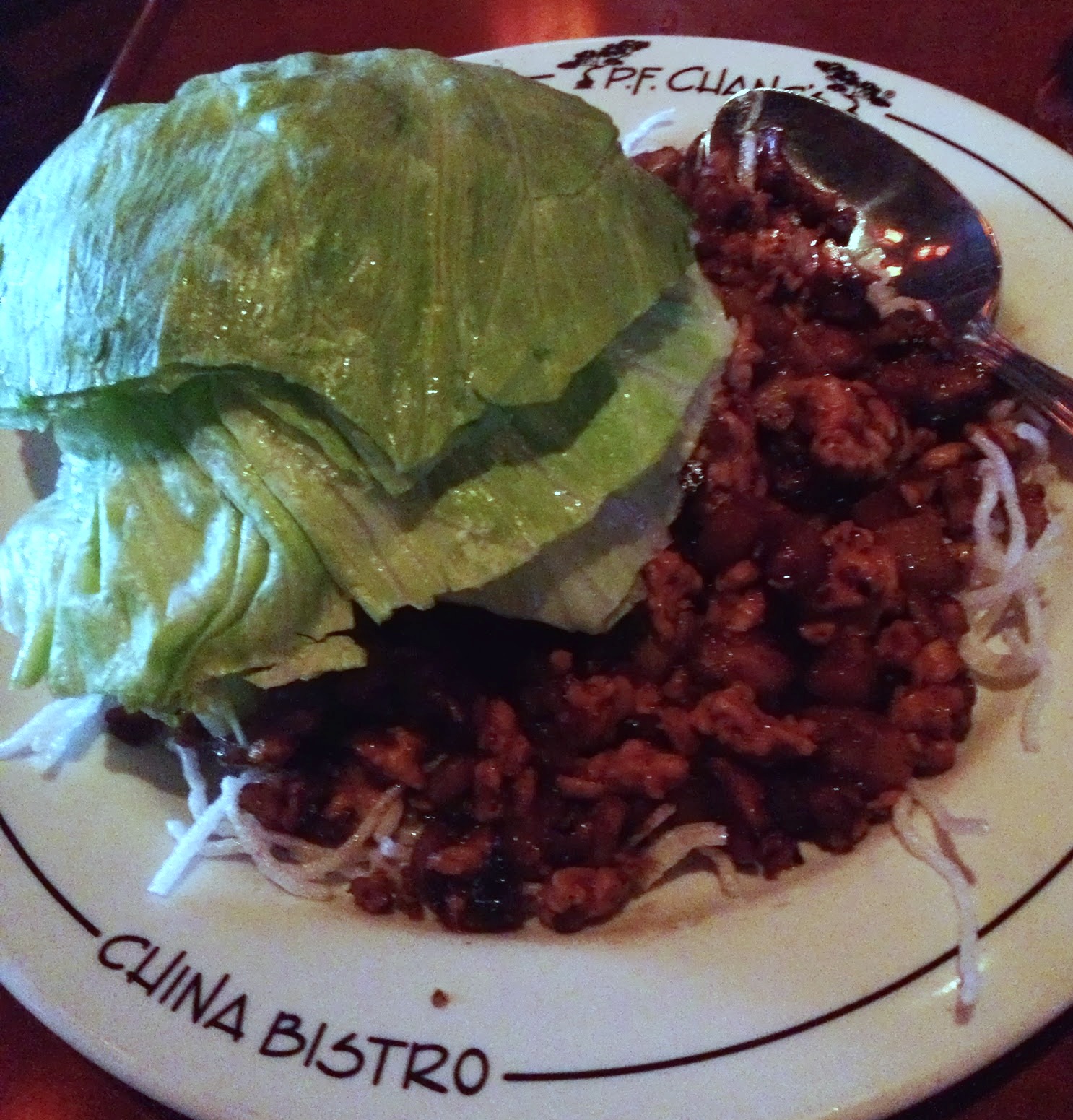 First – we had to have the lettuce wraps. If you haven’t been to PF Changs – it’s a must-try. It’s one of my favorite appetizers at any restaurant in town. Chicken, mushrooms, onions and water chestnuts are wok seared and then served with fresh iceberg lettuce leaves. It’s really delicious. 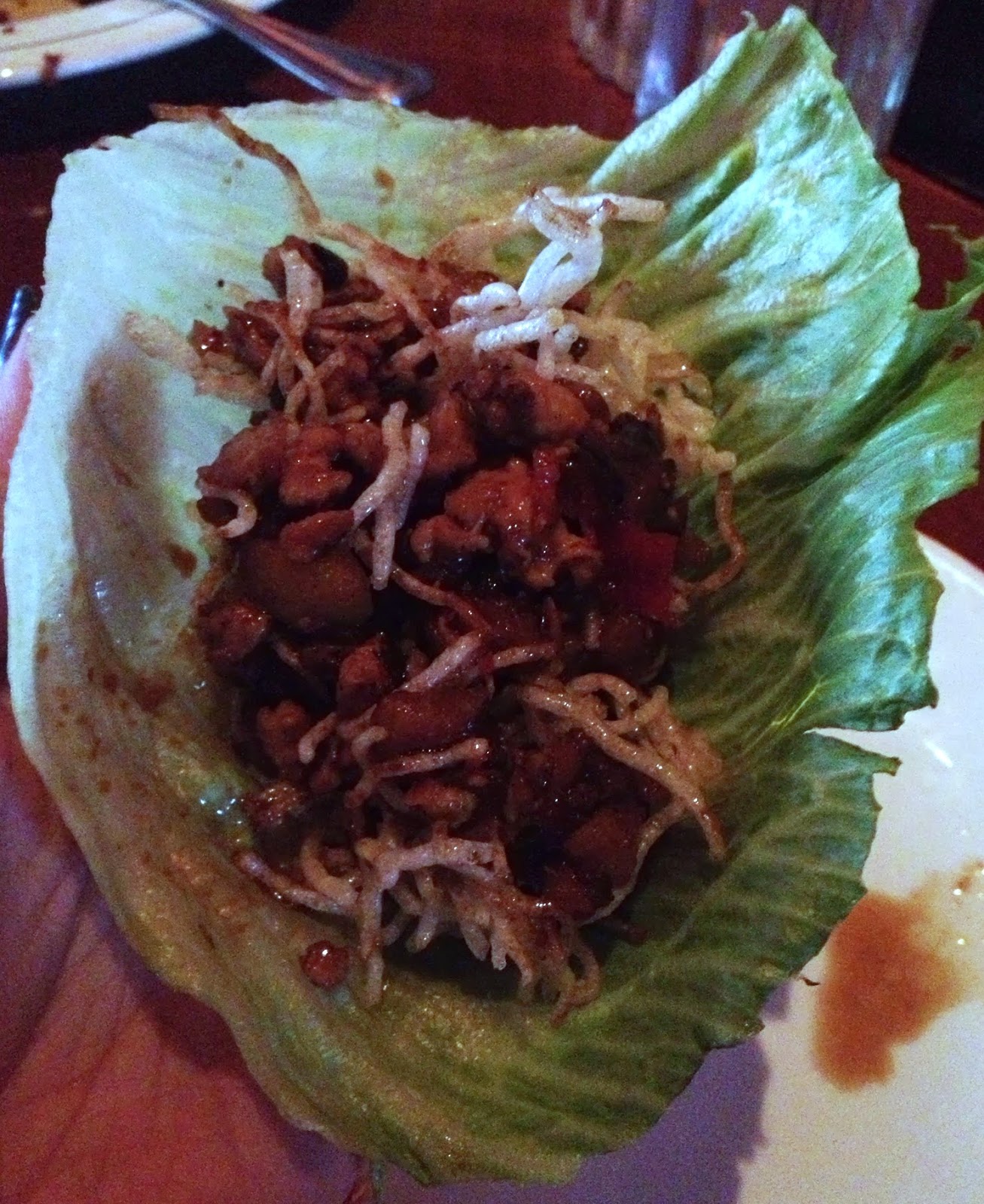 They also come with these crispy rice noodles – we each ate two leaves and still had 1/2 of the appetizer left! Woohoo leftovers! 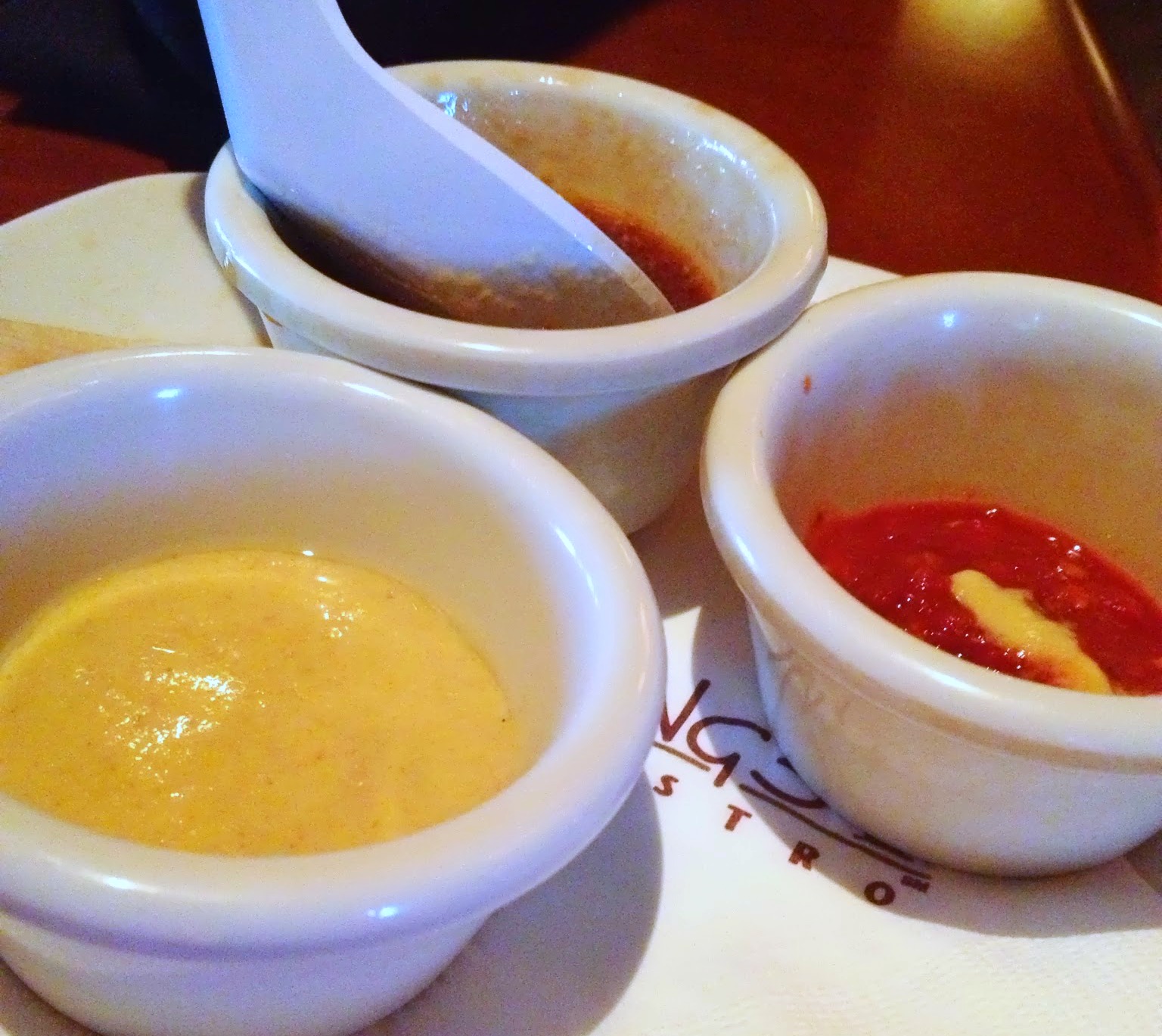 They also have a sauce at the table with mustard, chili paste and soy sauce – if you’re new they’ll mix a little up for you and then you can go from there to make it hotter, etc… 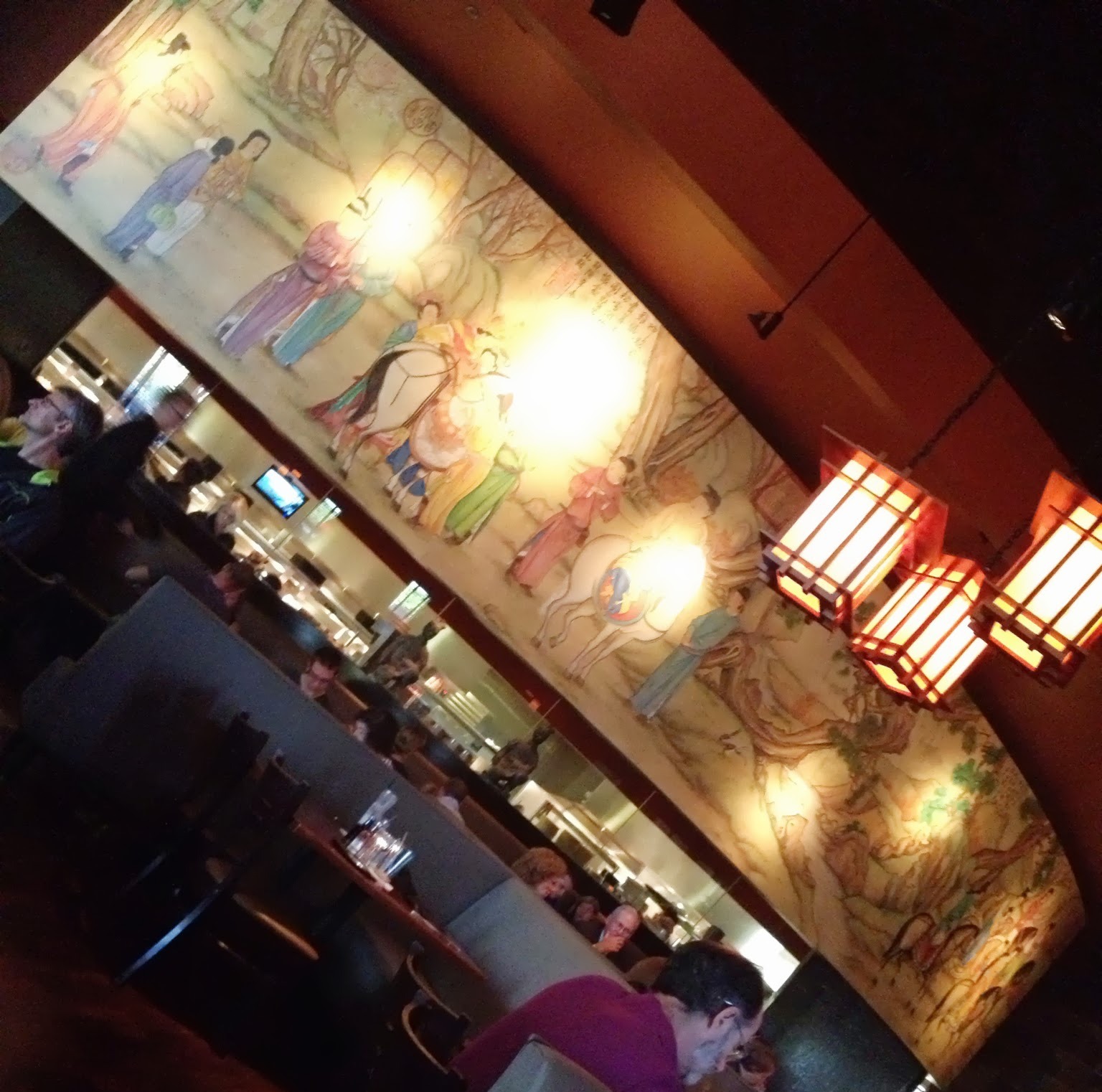 Inside it’s a cool atmosphere – they have these giant murals over the kitchen, a large bar area and an open floor plan. There are booths around the edges and then tables for the rest of the area. 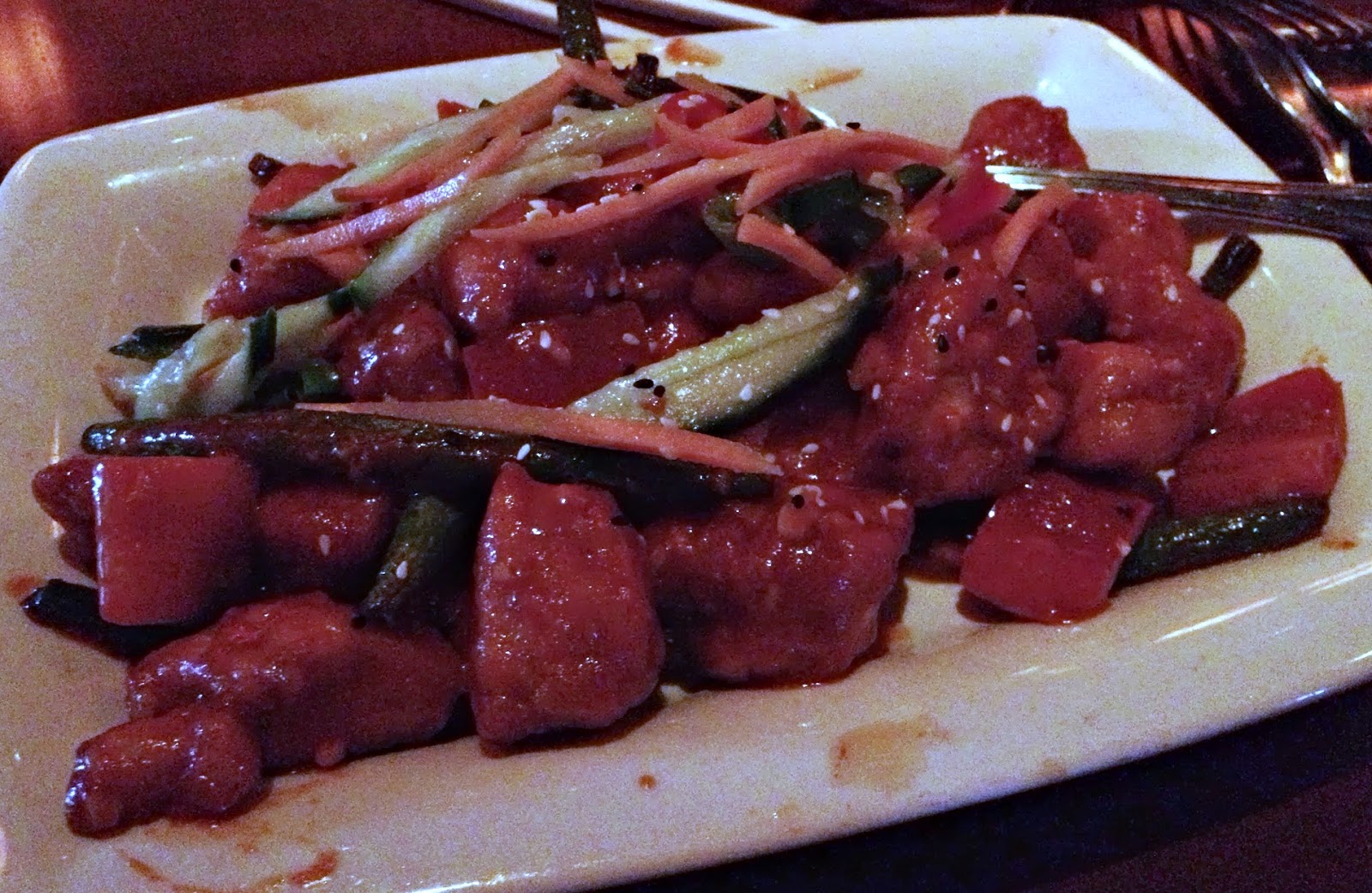 I got the Summer Menu Special Korean BBQ Chicken Stir-Fry which had a sweet & spicy red chili sauce with red peppers, onions and green beans topped with a kim-chi slaw.

I really like the way they cook their chicken – there’s an extremely LIGHT breading that just adds a little crispiness to the chicken but doesn’t coat it with that thick fried breading at most Chinese restaurants. The sauce on this was okay – I don’t love spicy and this was actually okay on that note – it was spicy but not too much so I couldn’t handle it – I’d say a 4-5 on a 1-10 type of scale.

I didn’t mind this dish – but didn’t love it. The sauce was pretty thick and the portion size was plentiful – it just wasn’t something I would order again.

Now Larry’s dish on the other hand… 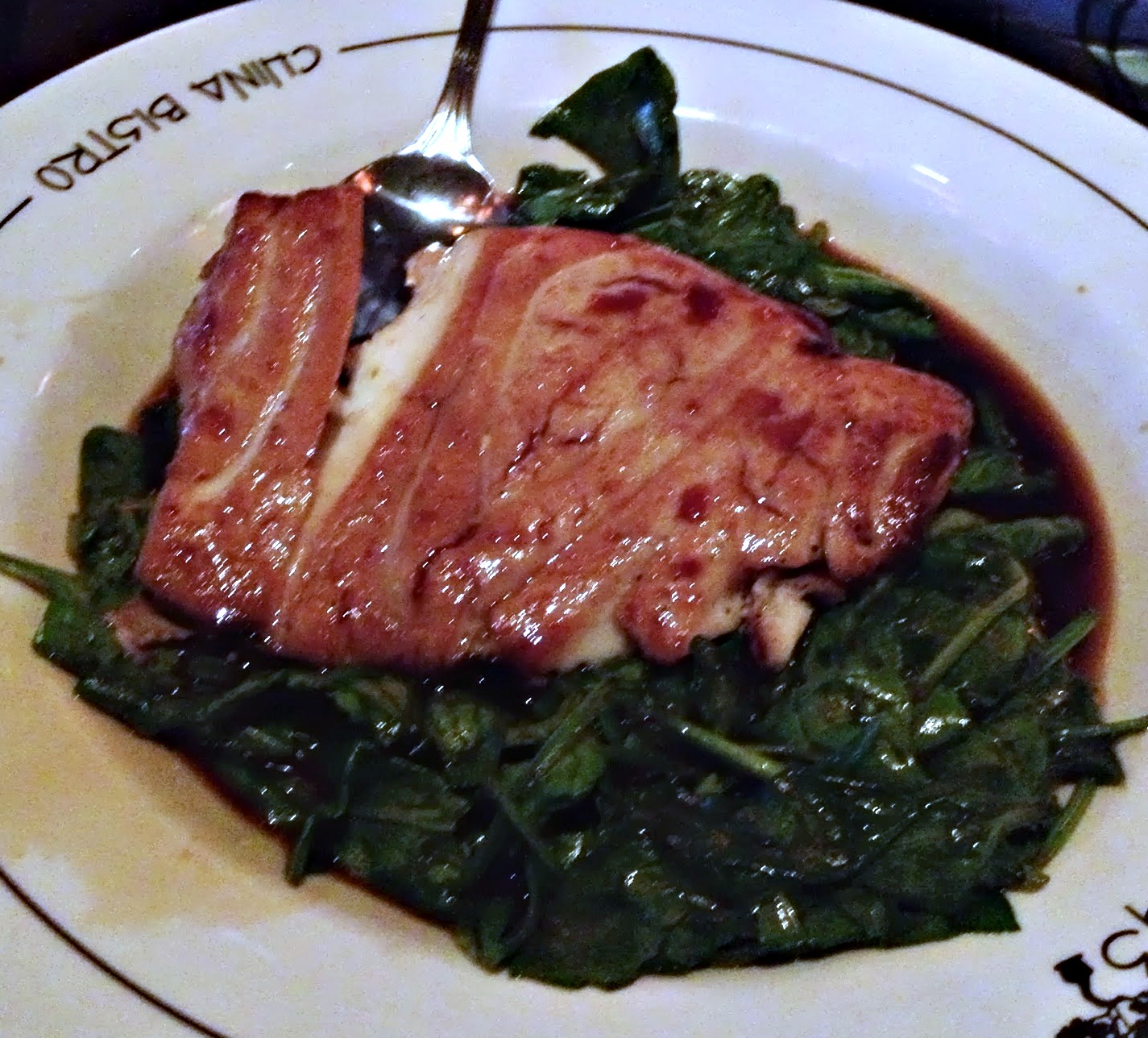 Was amazing!!! He got the Oolong Chilean Sea Bass which is a line-caught sea bass tea-marinated and broiled in sweet ginger-soy over warm spinach.

If you have an egg allergy – you’re pretty much screwed for entrees. To keep the meat fresh (never frozen) – it’s all marinated in something that has eggs – so there’s very little on the menu that is egg-free. If you do have an allergy – just ask and they’ll bring you a specific menu that has just the items you can eat. I have to say that was extremely helpful because I never would have guessed 99% of the menu had eggs!

But back to the sea bass – holy hell – best fish dish I’ve had in years. This was so good because there was nothing covering, smothering, coating or HIDING the fish. You really got to taste the fish and it was delicious. Larry even ate some of the spinach because the juice was so good. And I’ll admit – once I tasted his fish – I only ate about 5 bites of my entree – we split the rest of his. He’s a good husband that way.

So next time you hit up PF Changs – GET THE SEA BASS! 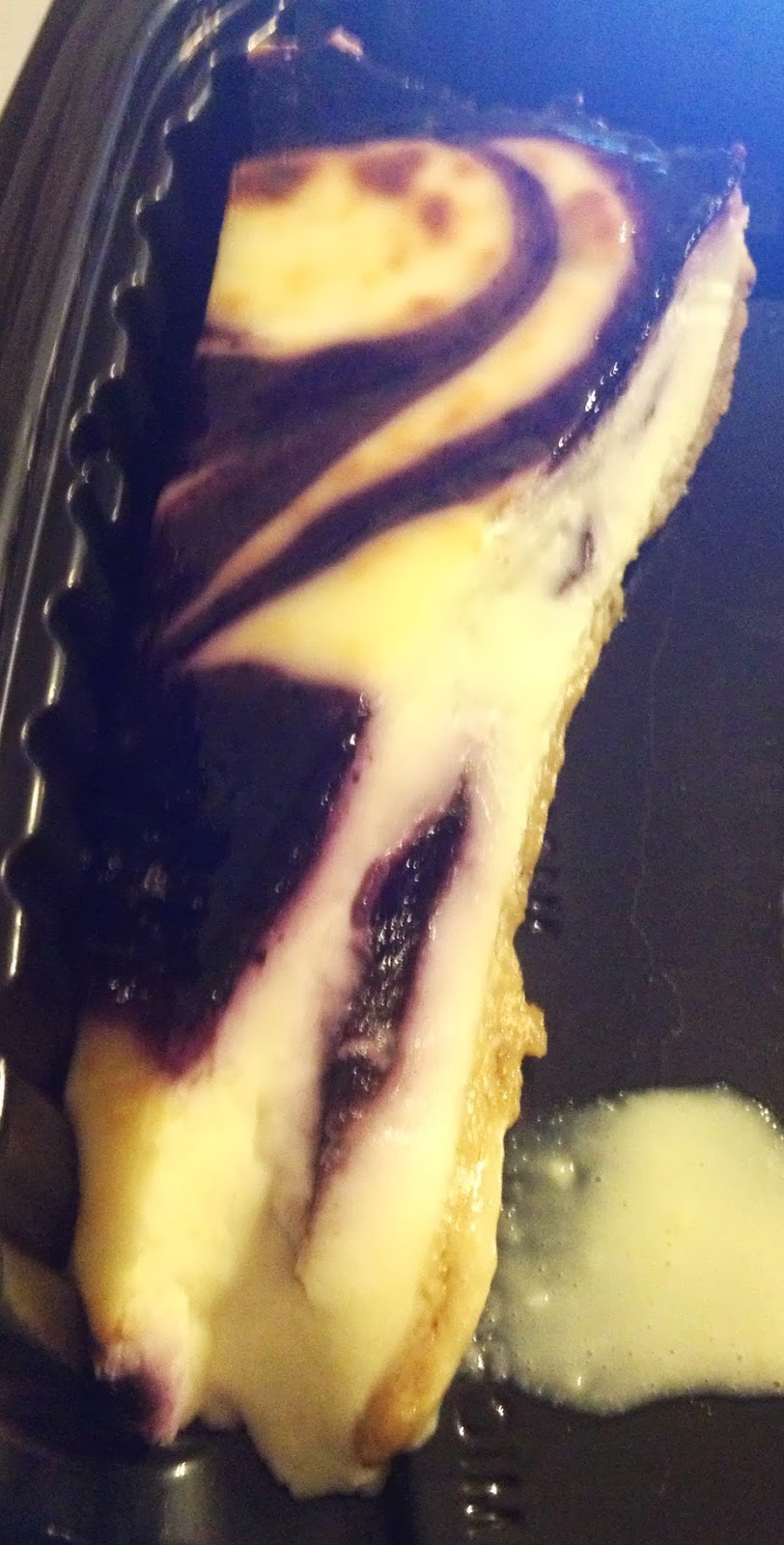 They have some large desserts but also some that are smaller and more individual. They said blueberry cheesecake was one so I got a slice to go. it was okay but I didn’t love it. The crust was really mushy – I’m not sure if it wasn’t cooked right or if it just got melty from the drive home – but I didn’t love this.

Why Should You Go? Um – that Chilean Sea Bass ($24.99 I think) is most definitely worth the visit. They also have a Prix Fixe Menu for two that is $39.95 – you get 2 soups, 1 starter, 2 entrees and 1 dessert – pretty good deal for all you get. I’ll definitely go back – that bass is already calling me!