Subscribe
Larry and I were invited to try out some new and tried & true Longhorn Steakhouse favorites a couple of weeks ago. We headed down to the Rookwood location in Cincinnati. 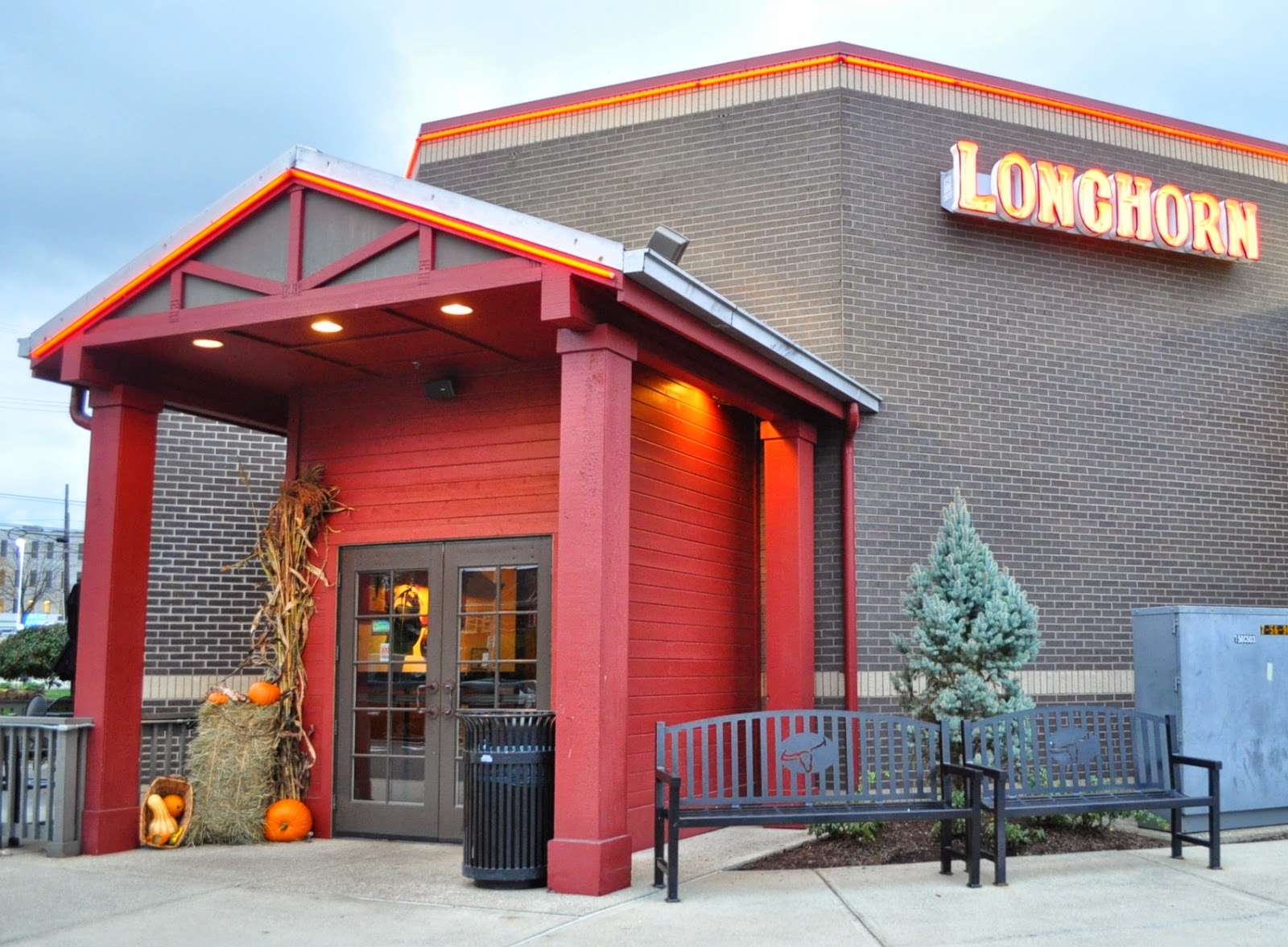 It’s one of the oldest Longhorn Steakhouse’s in the city- on the other end of the spectrum – the Northgate location by me is one of the newest! 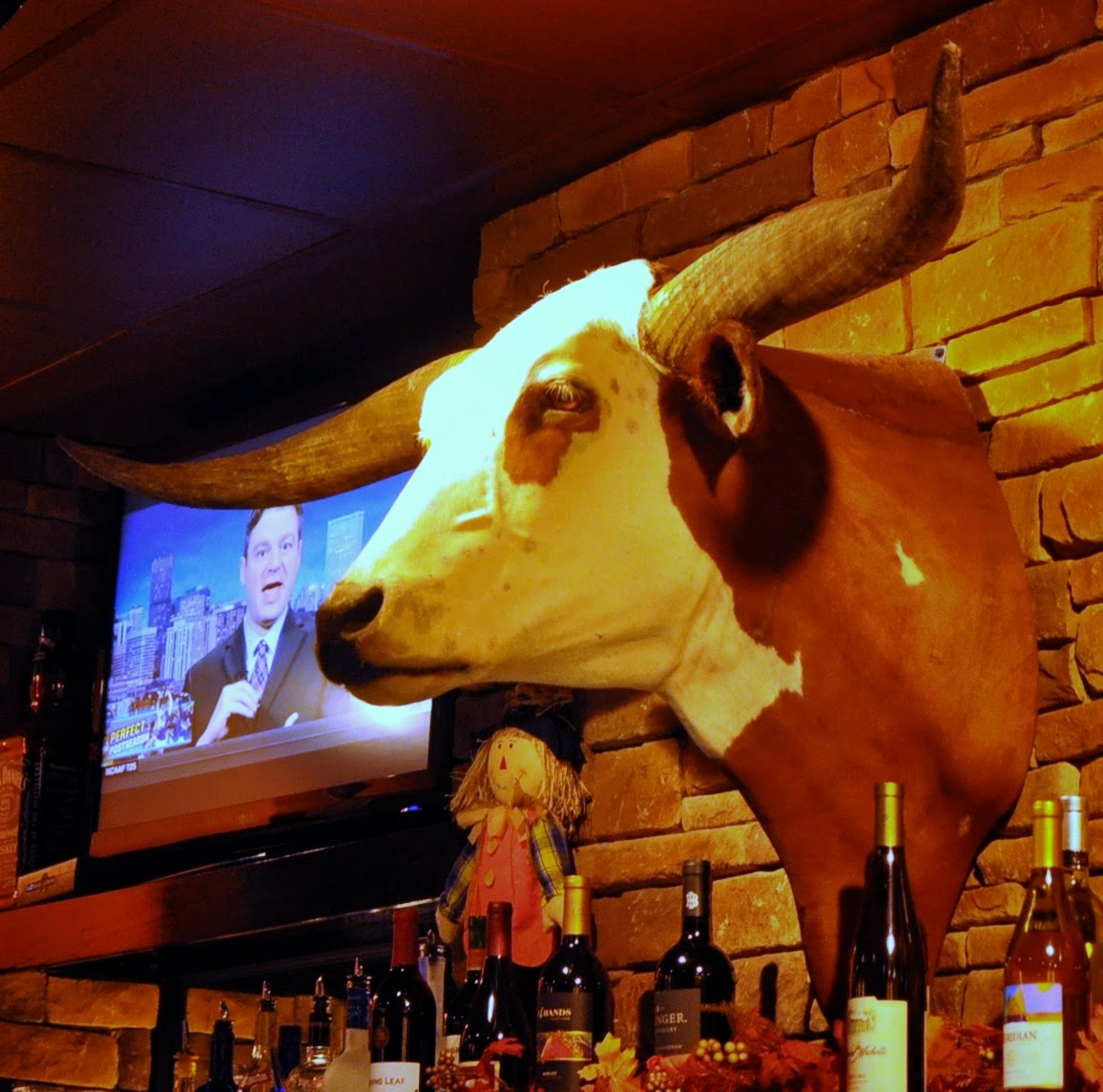 And if you ever forget where you are – just look above the bar…you’ll quickly remember. 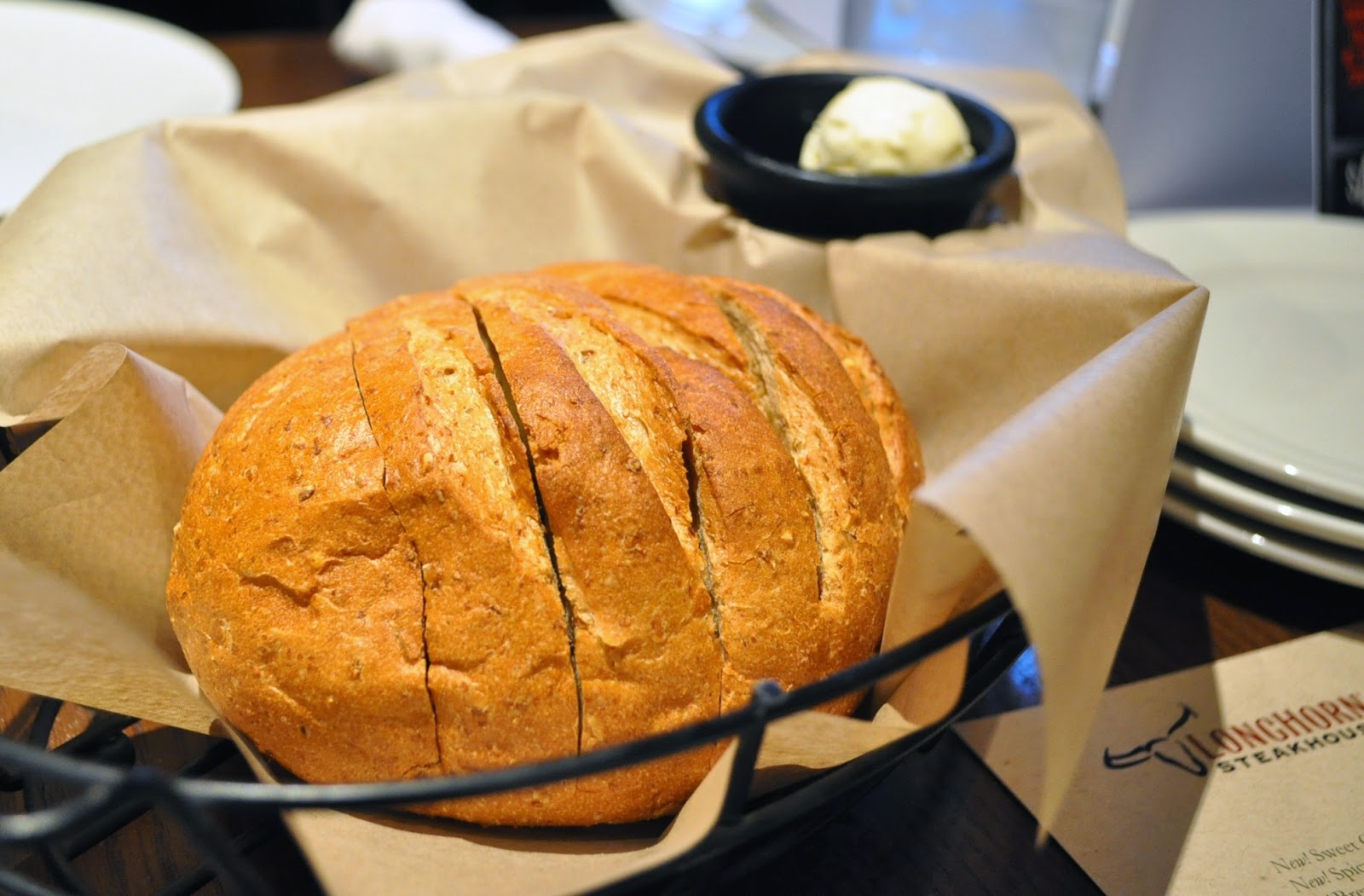 We started with a warm, fresh loaf of bread. I always love the bread at these places – the center is so soft and the outside is so crisp. Good stuff! 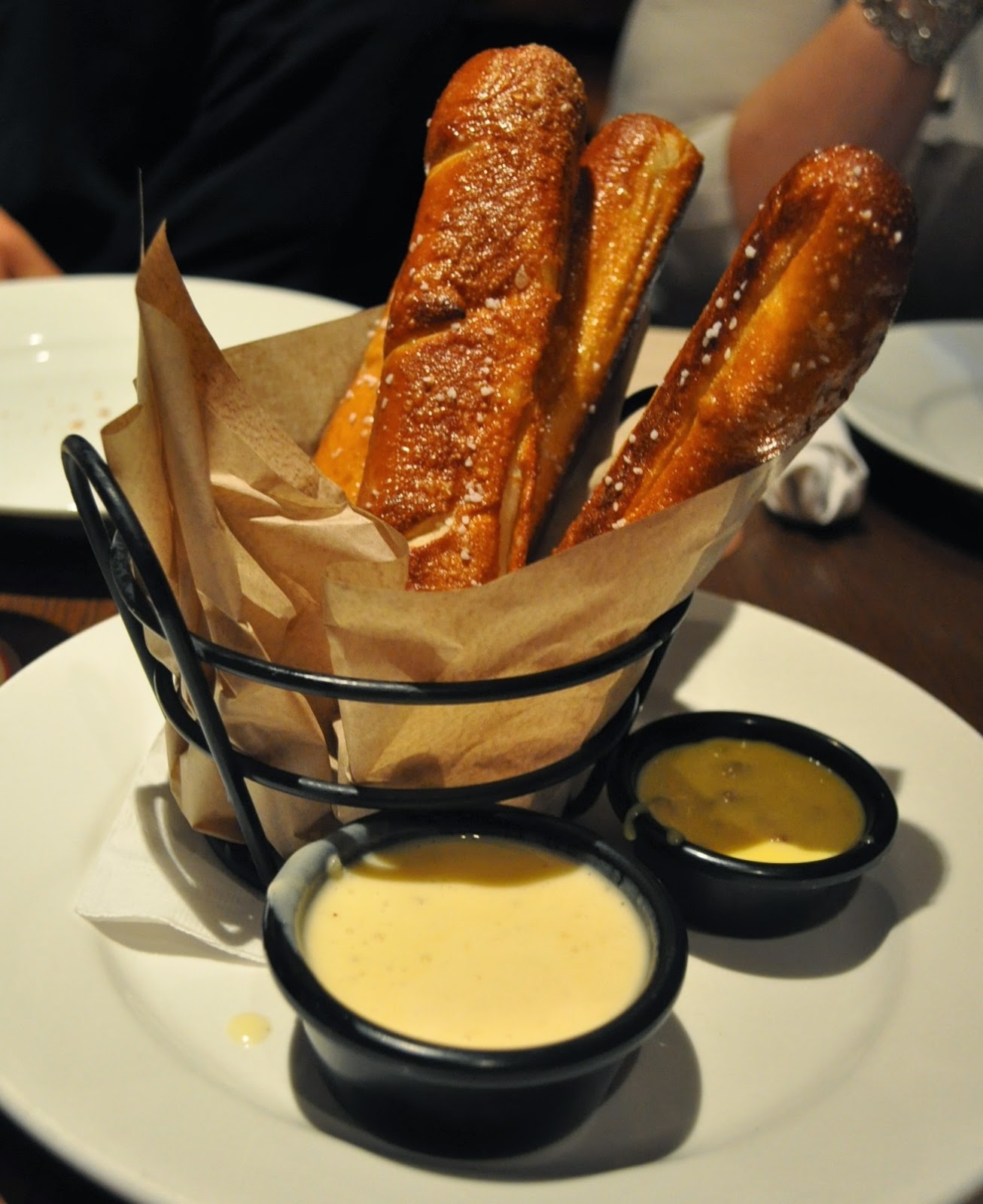 And now – appetizer time! I have to say – I don’t usually get appetizers at steakhouses – with salads and bread and sides – who needs them? Oh my – apparently I do! First up were the Brew Pub Pretzel Sticks with Sam Adams beer cheese & bacon honey mustard ($6.29). These were delicious – very comparable to the ones I had in Indy at the Colts Grille. Crispy on the outside – and the dips – so good! The beer cheese would typically be my favorite (and it was good) but the bacon honey mustard was fantastic! 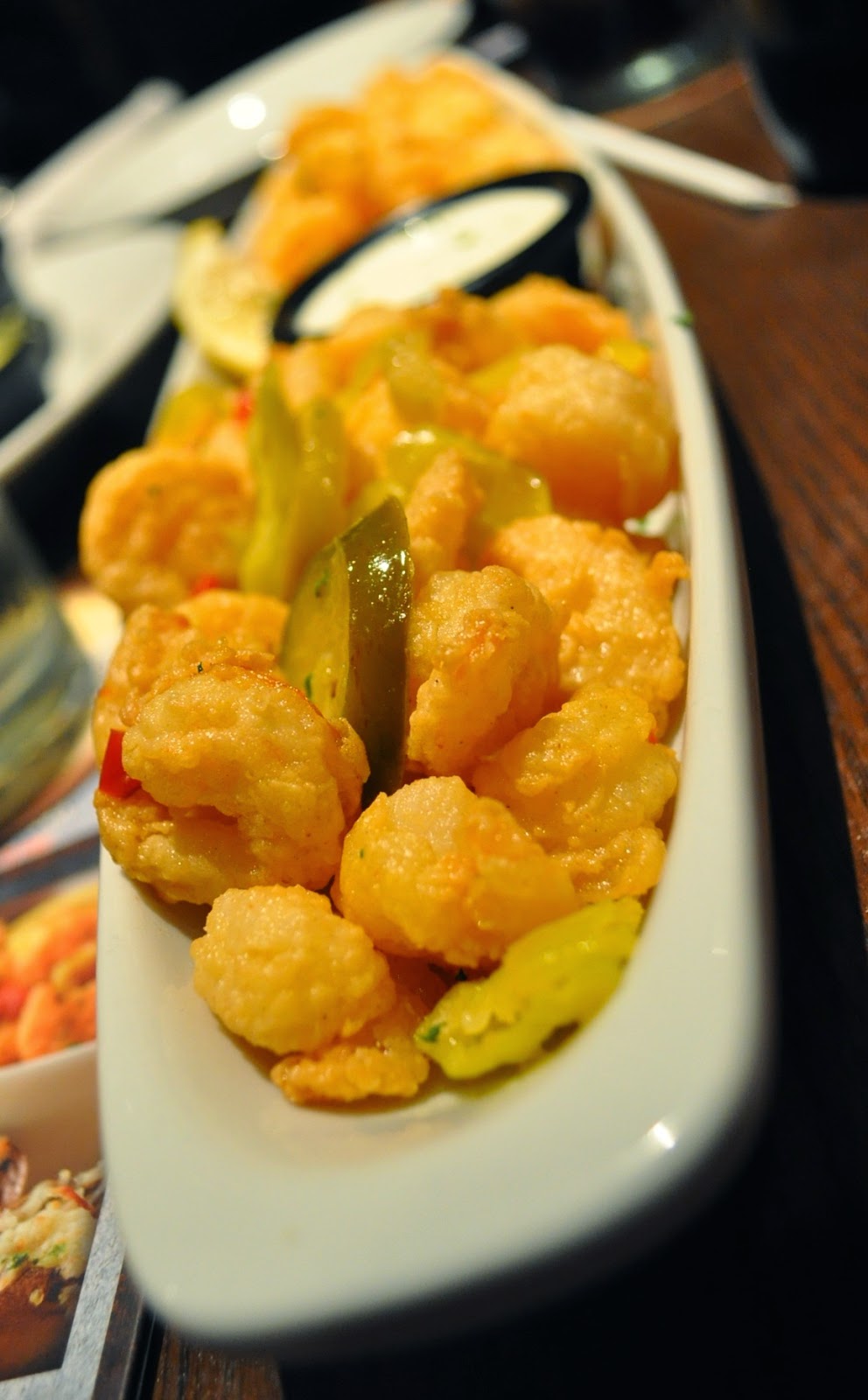 Next up was the Wild West Shrimp ($9.49) with hand-battered shrimp, garlic butter, spicy peppers and housemade ranch. My friend Lou LOVES this app and it’s her favorite. I did like it – it’s so snackable! 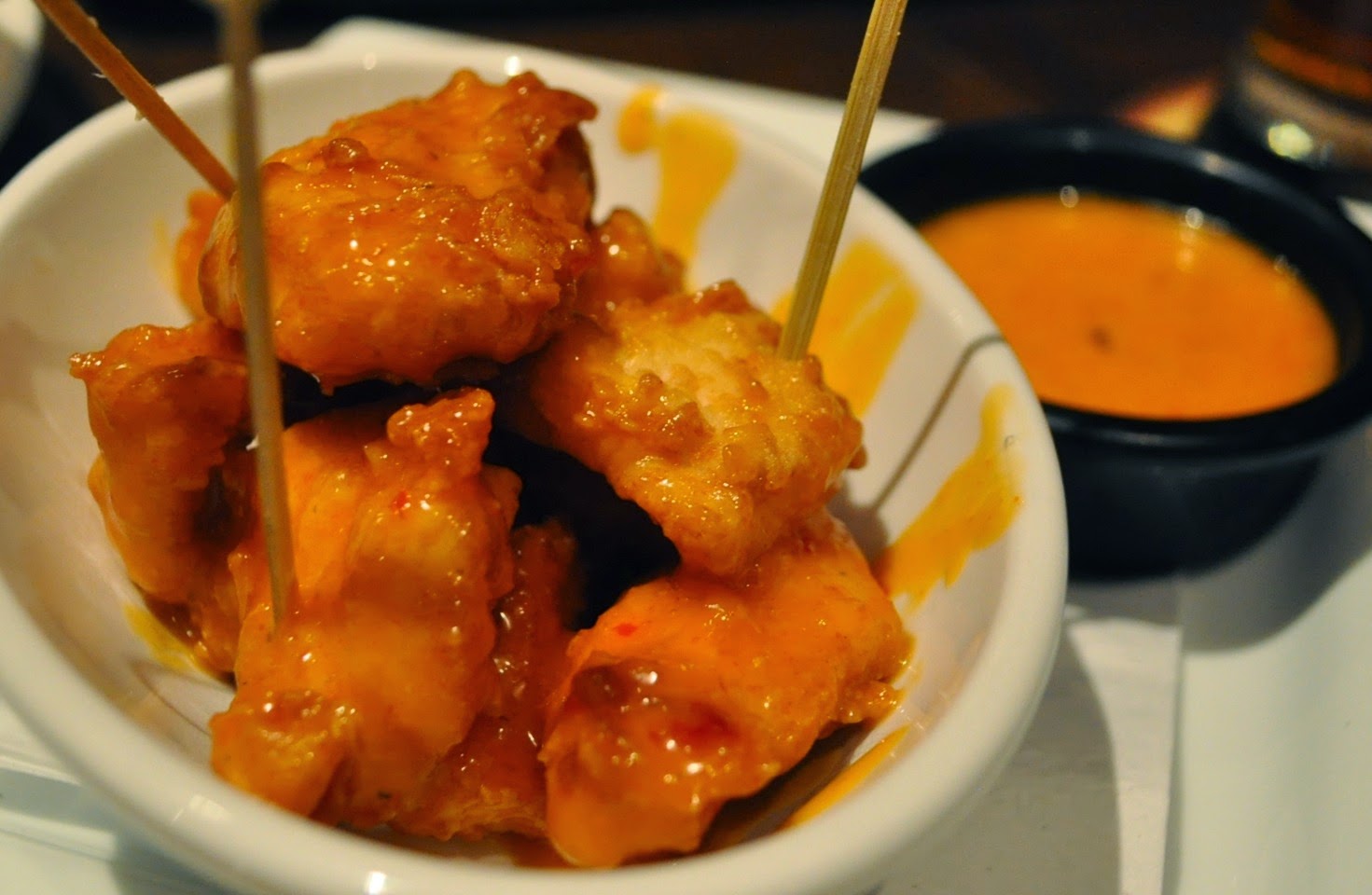 These Spicy Chicken Bites ($4.99) packed a punch! Crispy chicken bites tossed in a chili-ginger sauce. I loved these – they were spicy and crispy. It was like what chicken nuggets should be like! 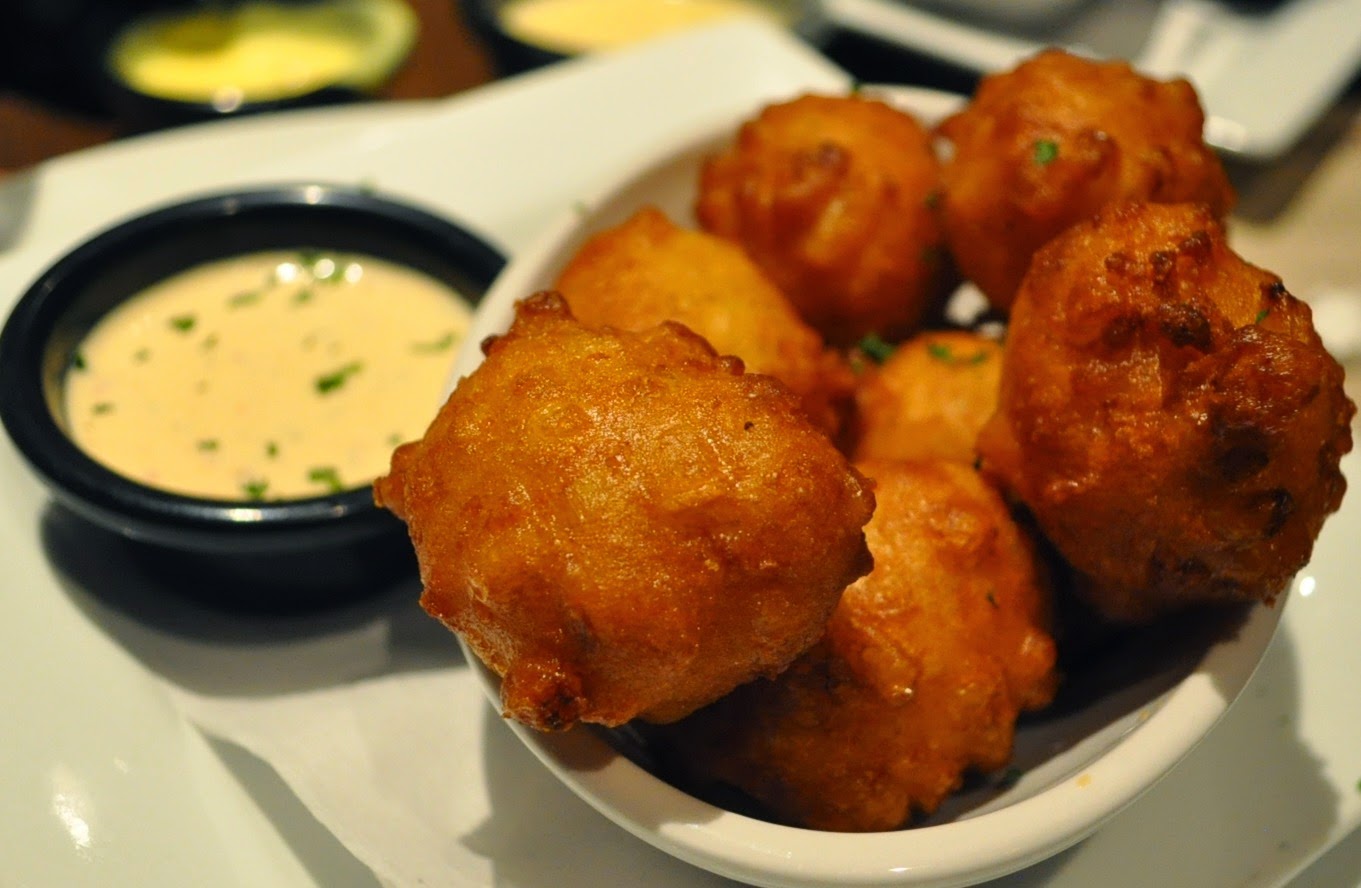 The Sweet Corn Fritters ($3.99) were a bit hit as well amongst the group. I liked them but they weren’t my favorite. It seems like all the things I’d like – but I just liked the spicy of the chicken and the honey mustard with the pretzels better. 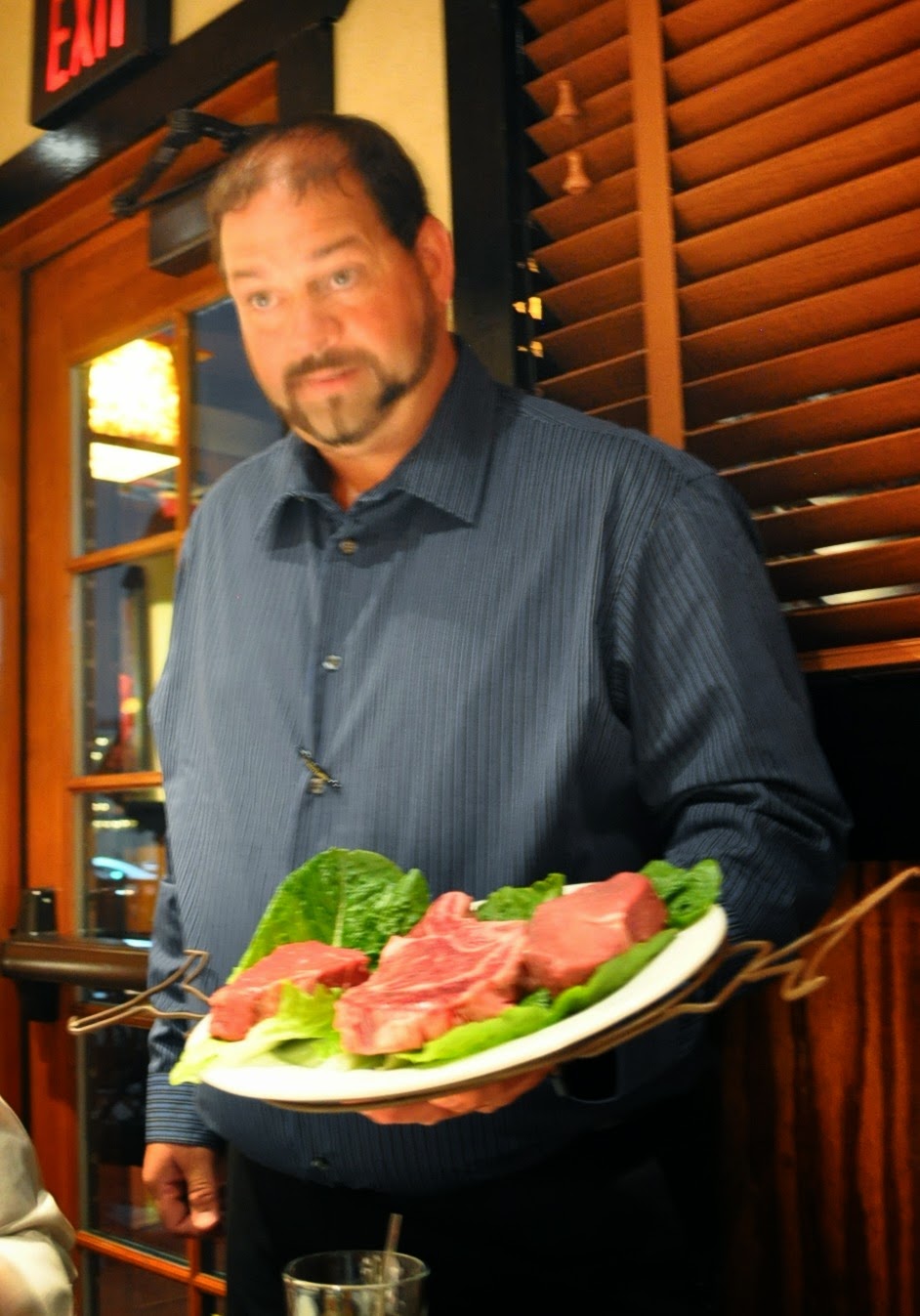 The manager stopped by to tell us about their steak options and even gave us a little quiz on the restaurant. (We were too busy eating to study the menu – oops.) He talked to us about his history with the company and the experience of his staff. It’s pretty amazing – sounds like a pretty good place to work too! 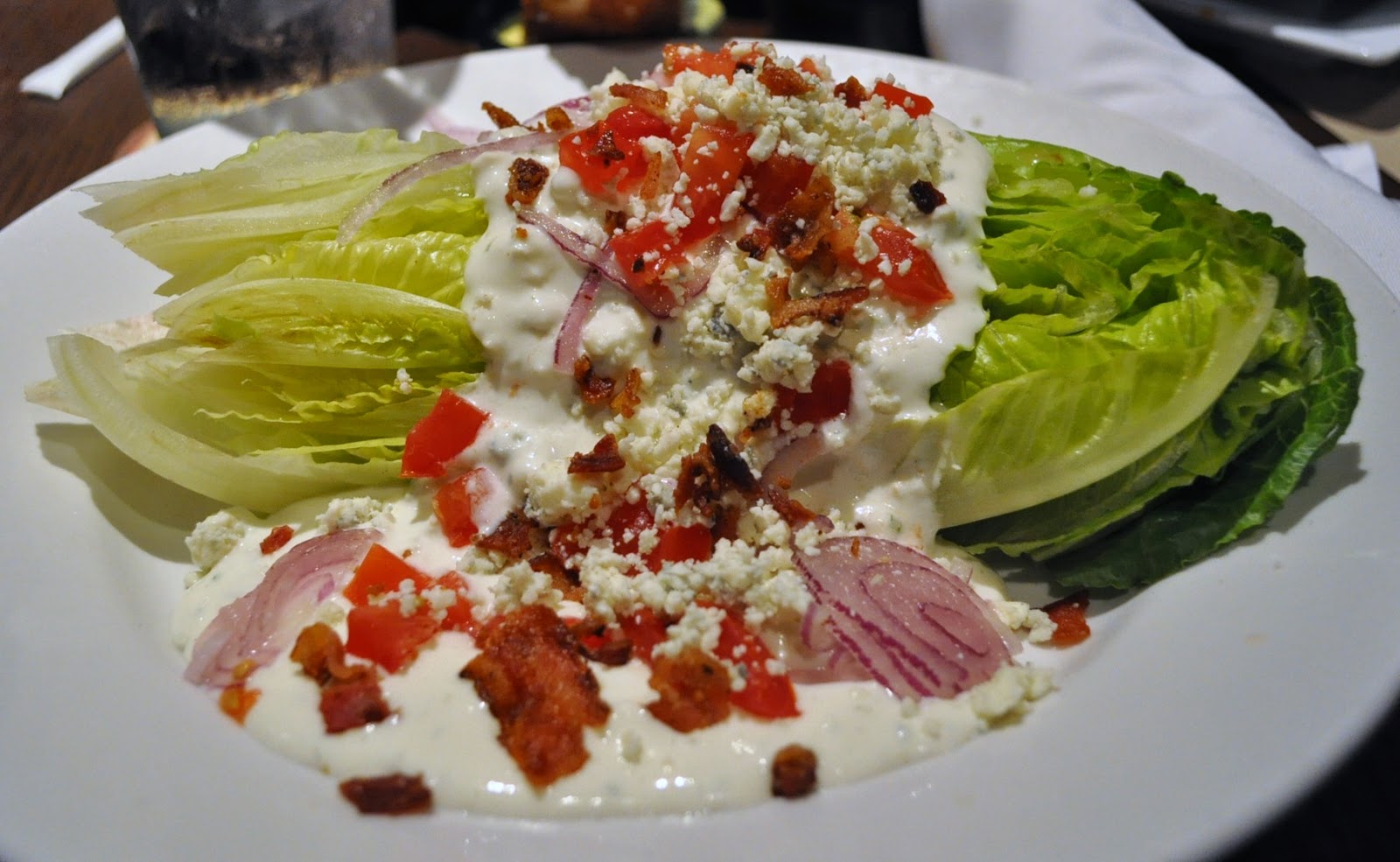 We got the Blue Ridge Side Salad ($5.49) – um wow – I don’t even like bleu cheese and this was great! There was a lot of dressing though – maybe a little heavy. It’s a large salad as well – that’s a lot of romaine. But man – was it good!

They also (for a charge) do a tableside steak sauce. They come and mix all this stuff together on this little hot plate and blam-o – you have steak sauce. It was very zingy and a little bit of spice. 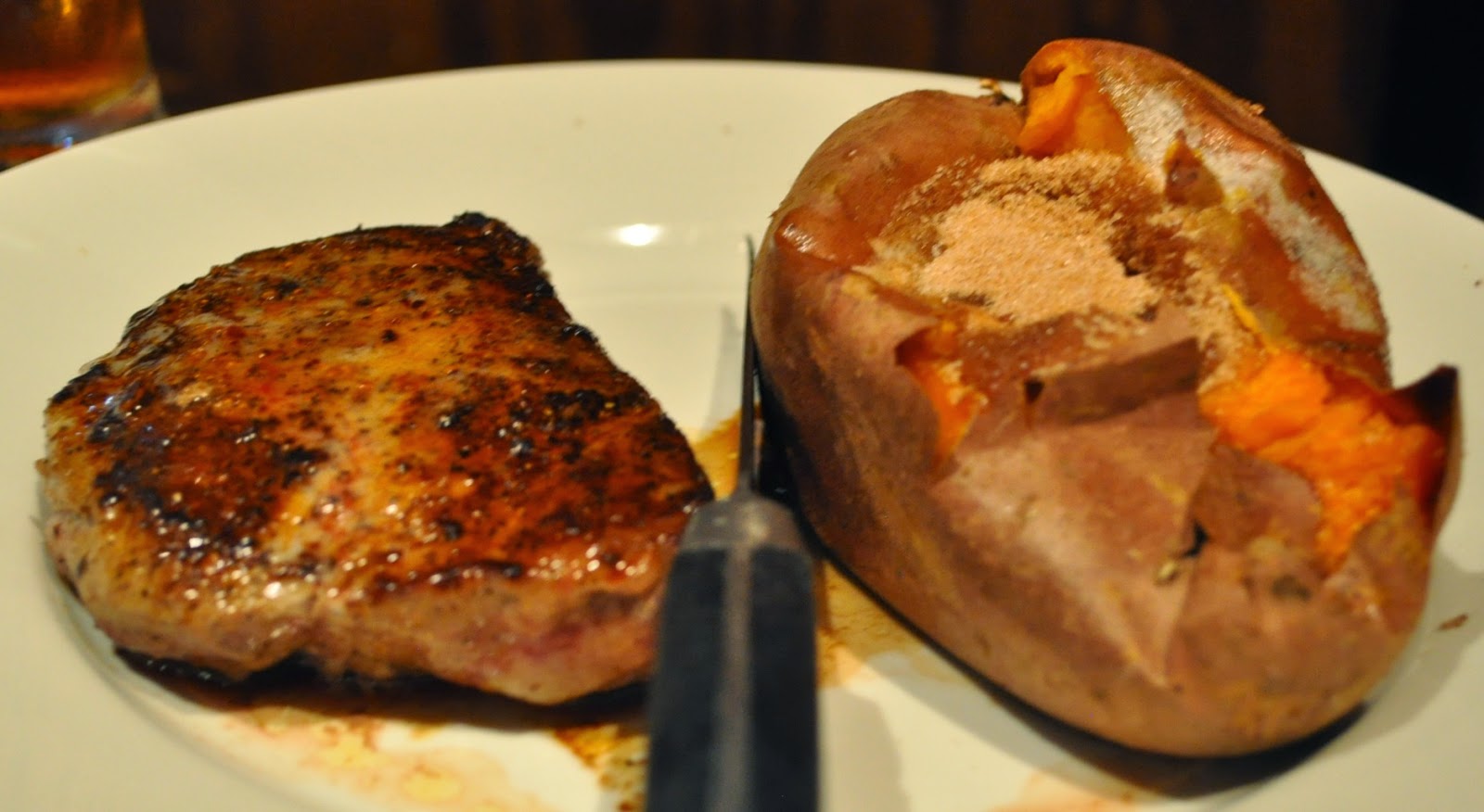 We had 3 steaks to choose from for the evening. Larry tried the Renegade Sirloin and a sweet potato ($11.99). I had a bite of his and was surprised at how juicy it was. I’m a big ribeye fan – but this was pretty darned good (and actually I liked it more than my… 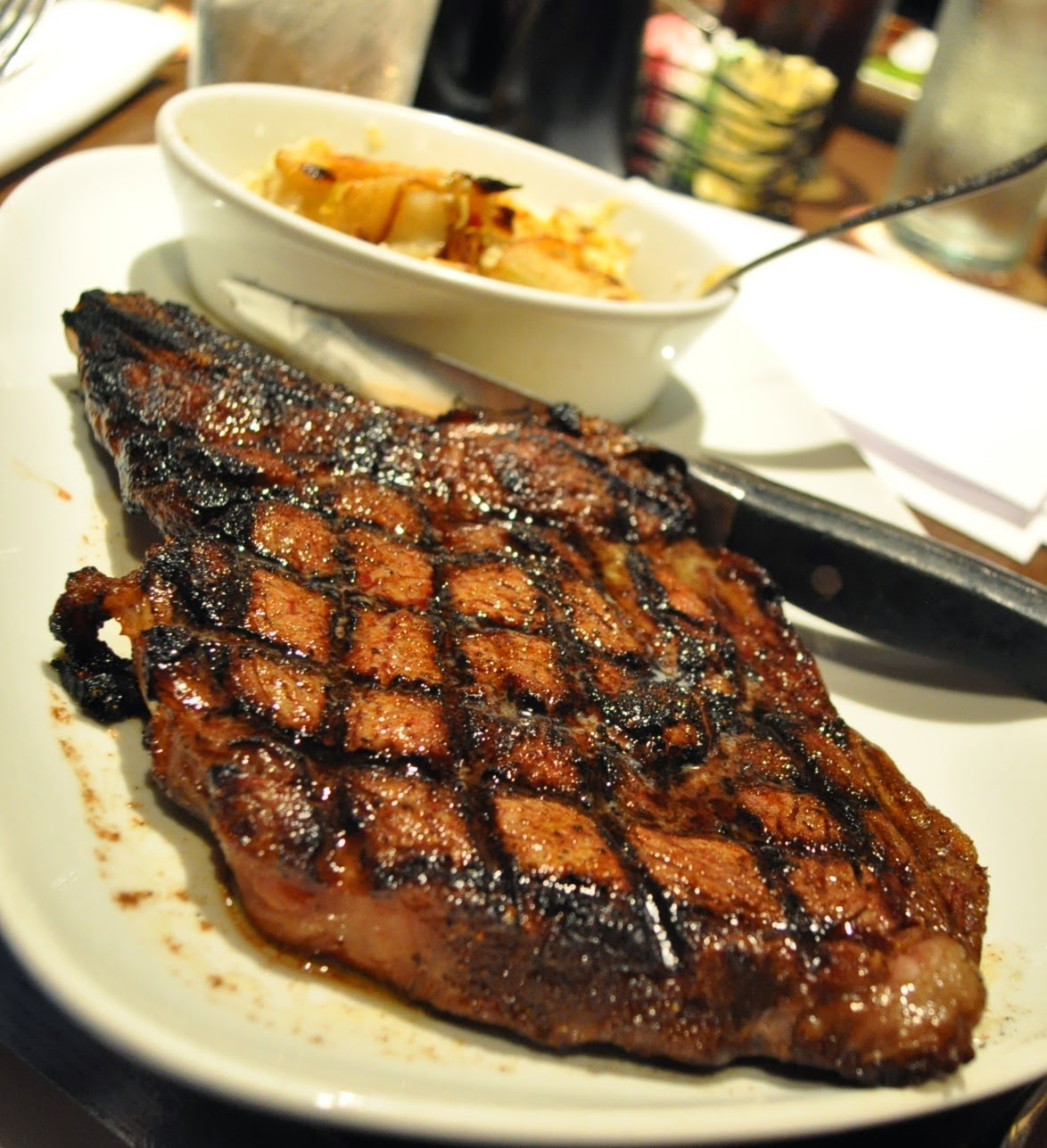 Outlaw Ribeye! ($24.99). I ordered it medium instead of my normal medium rare (I was sharing with a friend). I also didn’t love the char on the outside – sometimes I don’t like that taste on there. Larry’s renegade was delicious – I just think I like a medium rare steak and can’t budge for anybody! (Sorry Kristen – no more sharing – haha). 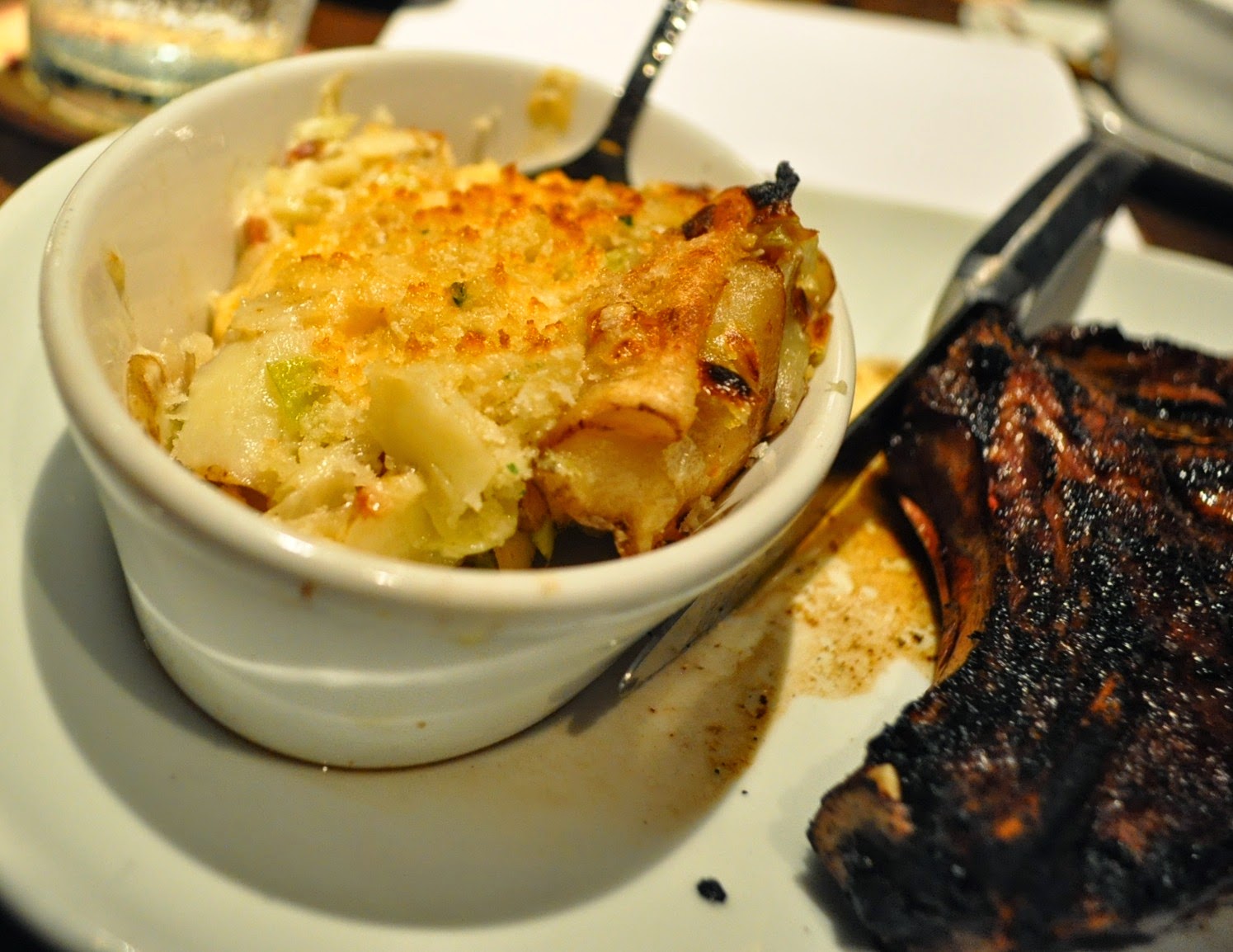 For my side I went with their potato and leek gratin. Honestly I was too full to really enjoy it – so I tried a bite or two and did like it – I’d get it again if I went on a regular visit. It’s nice to have something other than a baked or mashed potato. Fancy sides are yum! 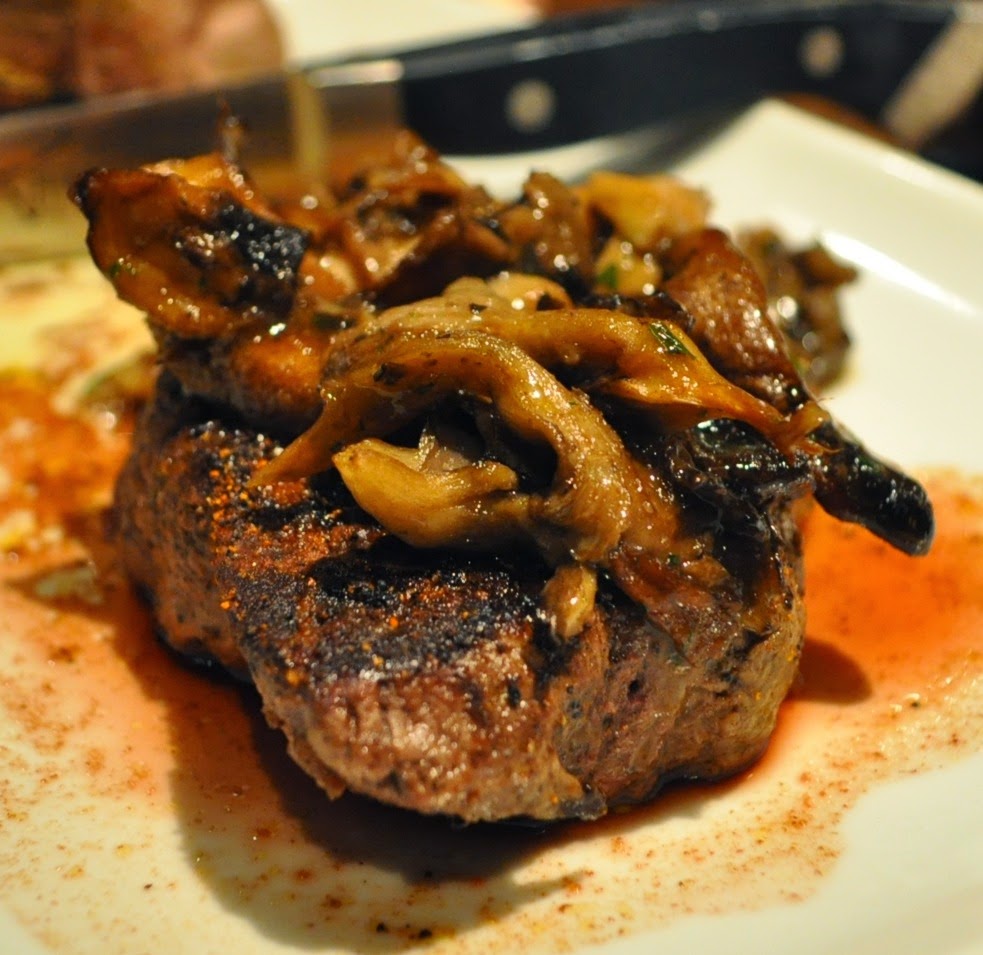 Why did I share anyway? Oh yeah – so I could have some of the special Harvest Mushroom Filet ($21.99) – a center cut filet with a bordelaise sauce and a trio of mushrooms. Even though it was medium – it was really good. That filet was tender and juicy – just the way it’s meant to be. 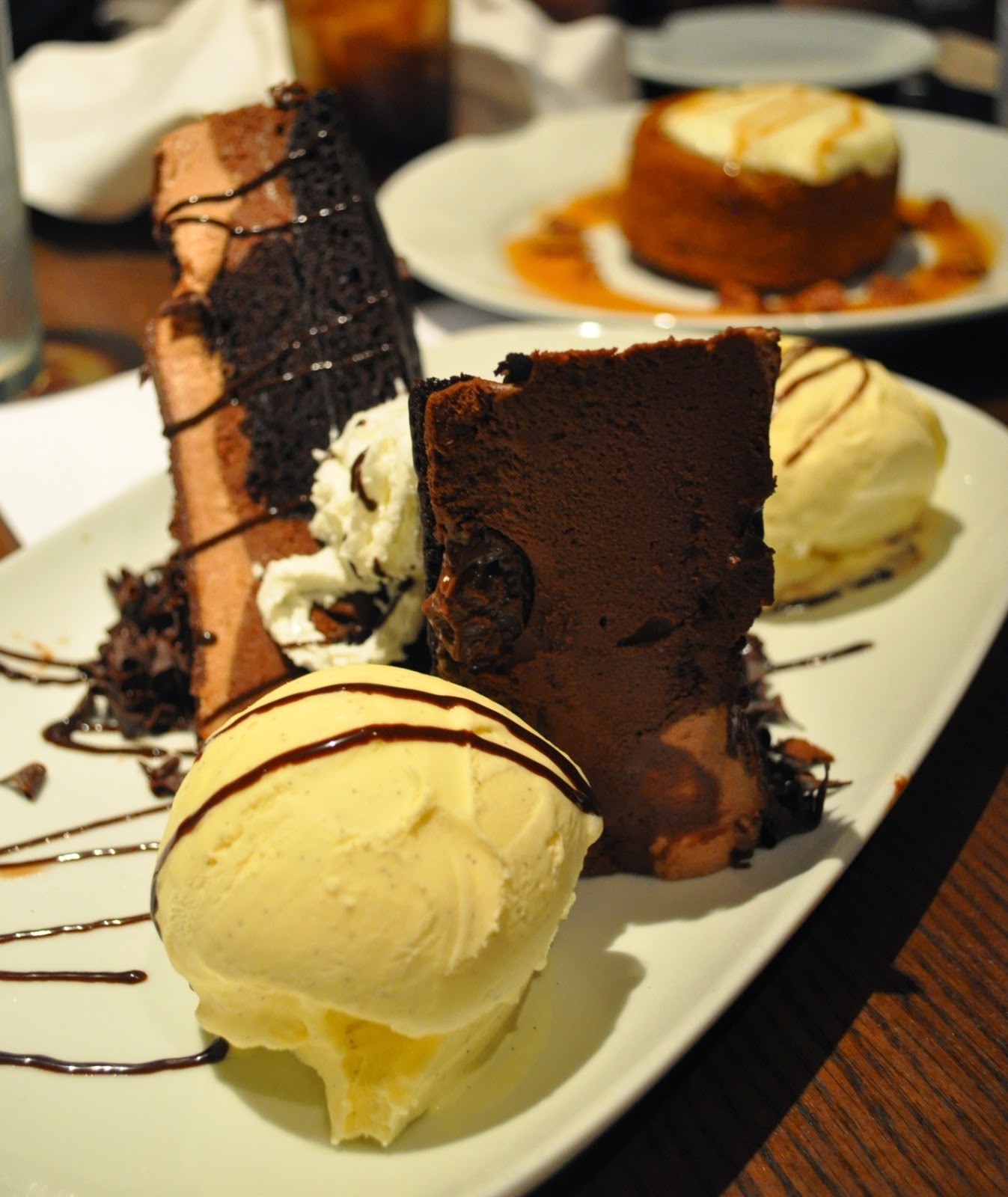 Yowza – some people were ready to handle dessert – I was done for the night – but I did try a bite of each. The Chocolate Stampede ($8.49) was definitely my favorite – the cake was surprisingly light with a lot of mousse rather than a lot of heavy. Definitely a dessert meant to be shared! 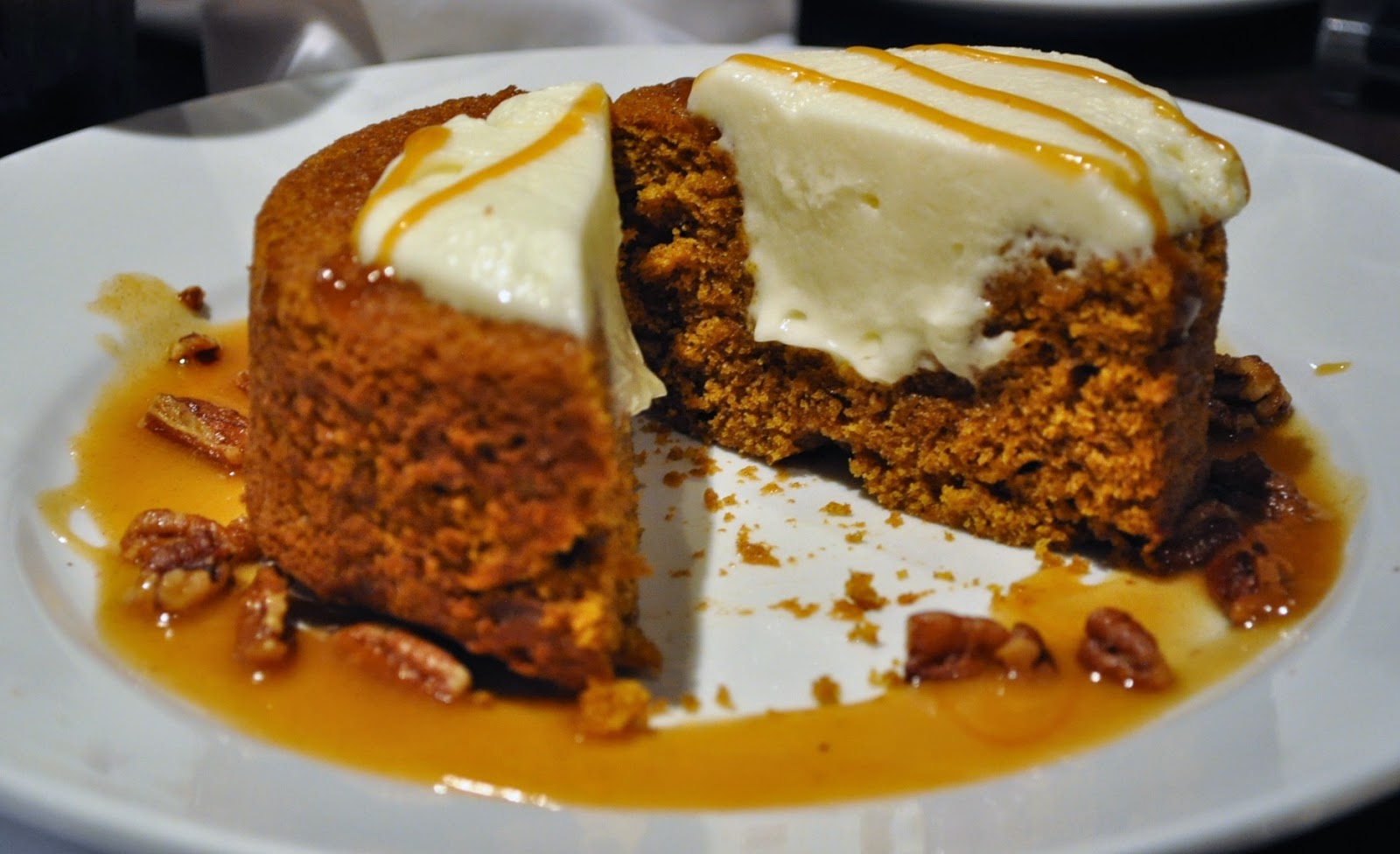 The other option was their Pumpkin Spice Lava Cake ($6.99) – everybody raved about it. I had one bite and it was good – but I was definitely too full for it. Luckily there were other folks that were more than excited to take leftovers home. 🙂 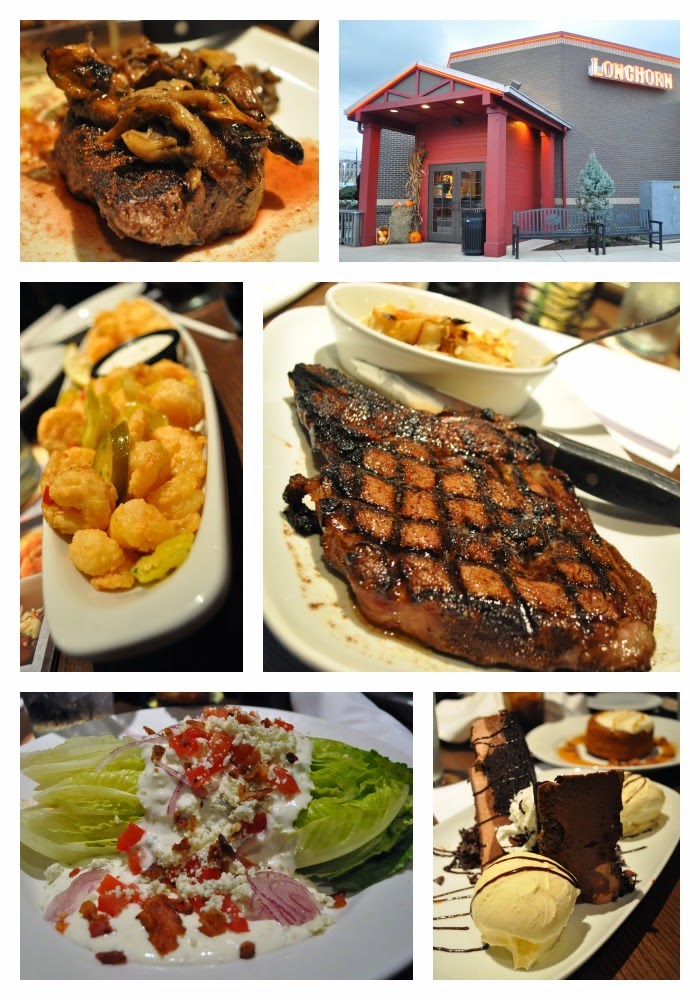 Why Should You Go? Actually I went back the next night – so yeah – you should go back. I resisted the temptation to get those pretzel sticks again. I went for chicken tenders (the girls had raved about them) and they were right – they are delicious and a huge portion! I had enough for lunch the next day (I did have the honey mustard again!). Larry had his Renegade Sirloin again and loved it just as much! Enjoy!

Disclosure: Longhorn Steakhouse provided the meal for us but all opinions are my own.