Subscribe
I’m a big fan of Dewey’s Pizza – it was one of the first times I had pizza that wasn’t just normal pepperoni & sausage type of pizza. They’re really expanding and popping up all over the city – with 8 locations in Cincinnati and a 9th opening next month – they’re everywhere (well – except Colerain – come on people!!).

I was invited to try the new Harrison Greene location in Greene Township a couple of weeks ago. It’s a great location that also has a First Watch and a Graeters! Pizza and ice cream for the win!

The location is not one of the largest – but so far – it has been one of the busiest! They told us that their opening day was the busiest day in the HISTORY of Dewey’s. The Westside was ready for some Deweys! 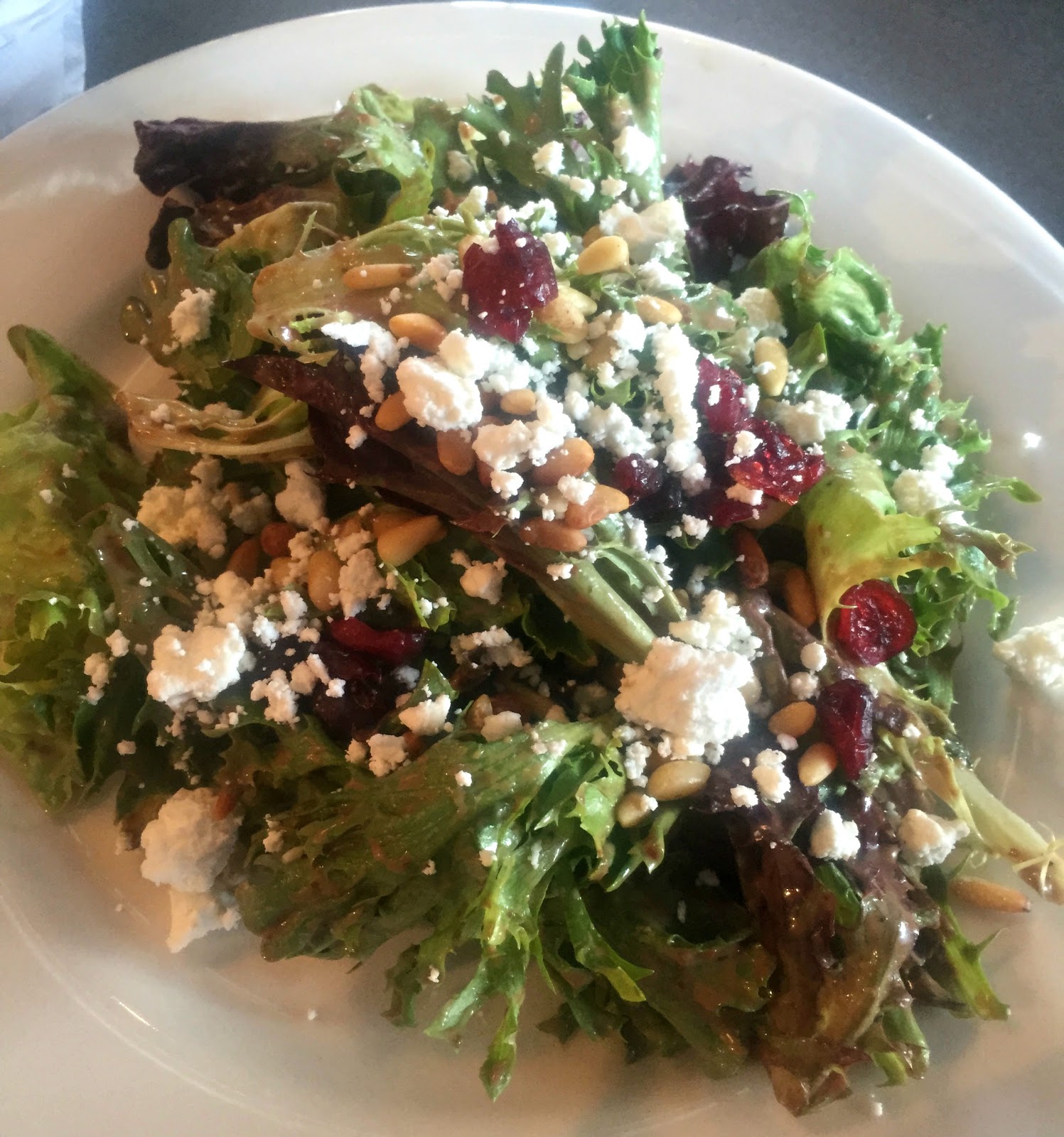 We started out with side salads – which are always such a good size. I went for the Side House Salad ($5.45) with field greens, toasted pine nuts, sun-dried cranberries, goat cheese and Dewey’s House Balsamic Vinaigrette. Larry worked at Dewey’s a few years ago and I ate so many house salads it’s not even funny – I literally had to give them up for a while – but now I’m back – and enjoying the goat cheese! 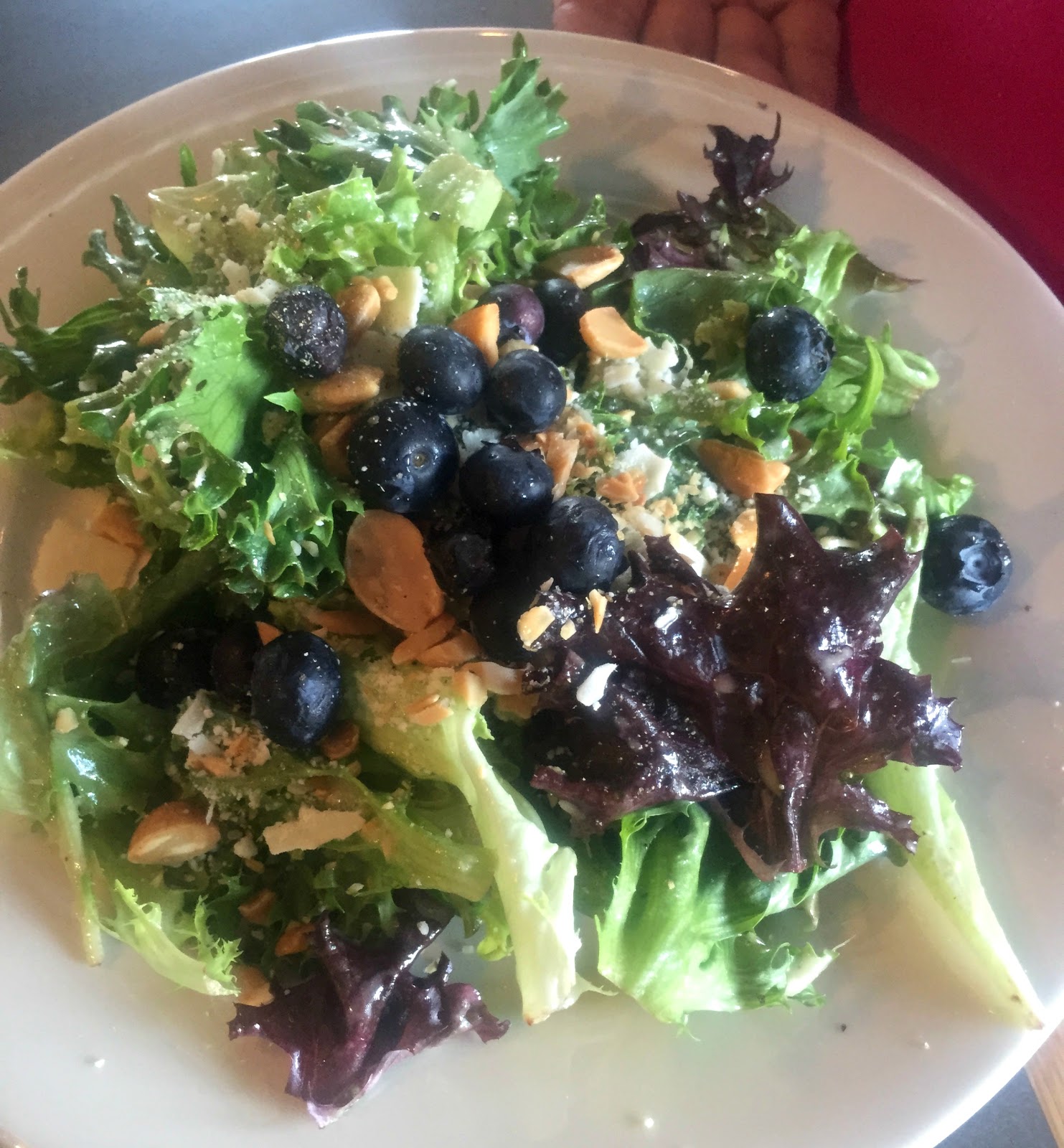 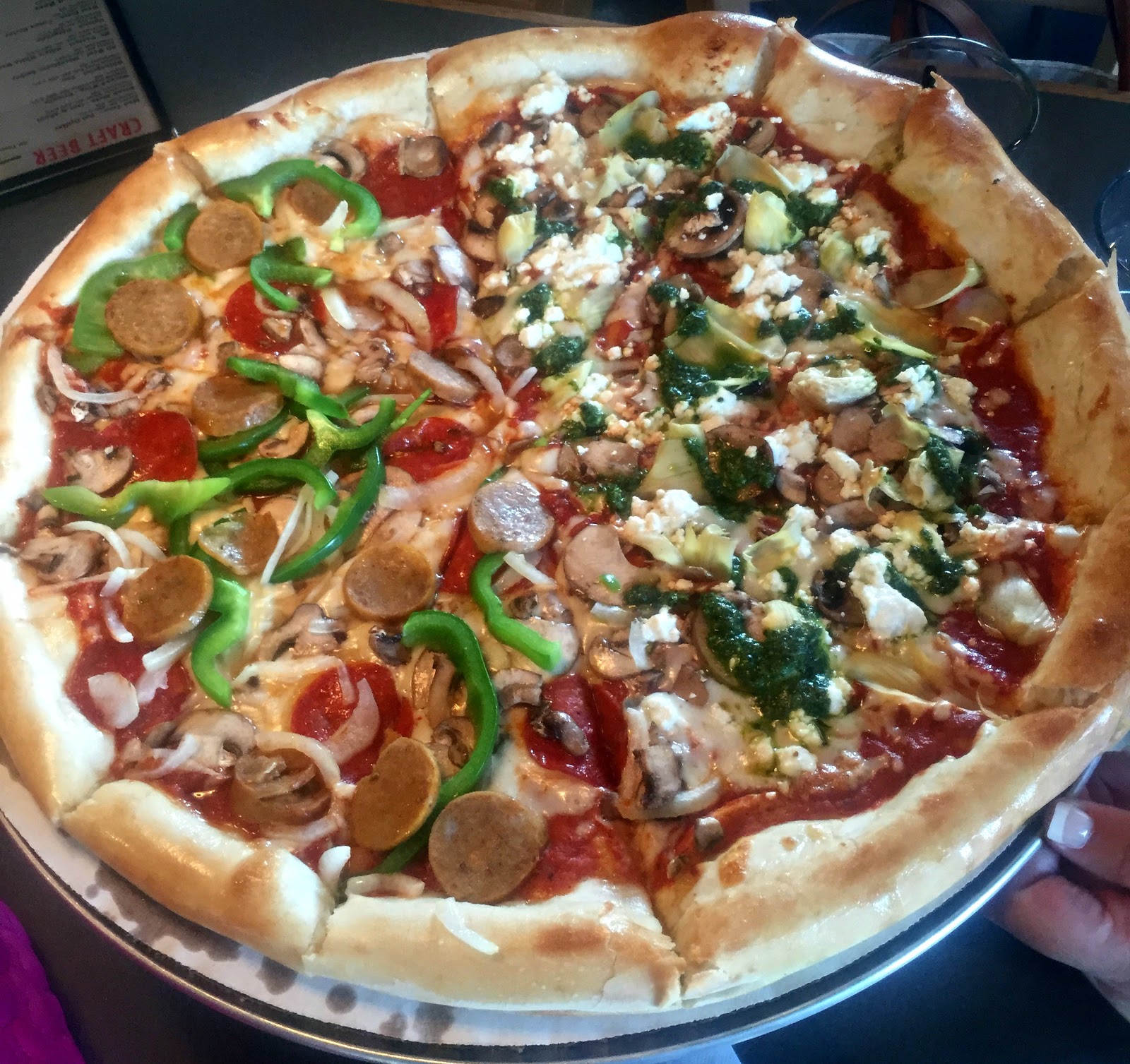 We ordered a large half-Green Lantern and half-Bronx Bomber ($21.95). I love that you can do half and half pizzas and you can mix the red sauce with the olive oil base! The Green Lantern (right) has red sauce, light mozzarella cheese, minced garlic, mushrooms, goat cheese, artichokes & pesto. The Bronx Bomber (left) has red sauce, mozzarella cheese, pepperoni, sausage, mushrooms, onions, green peppers and black olives. 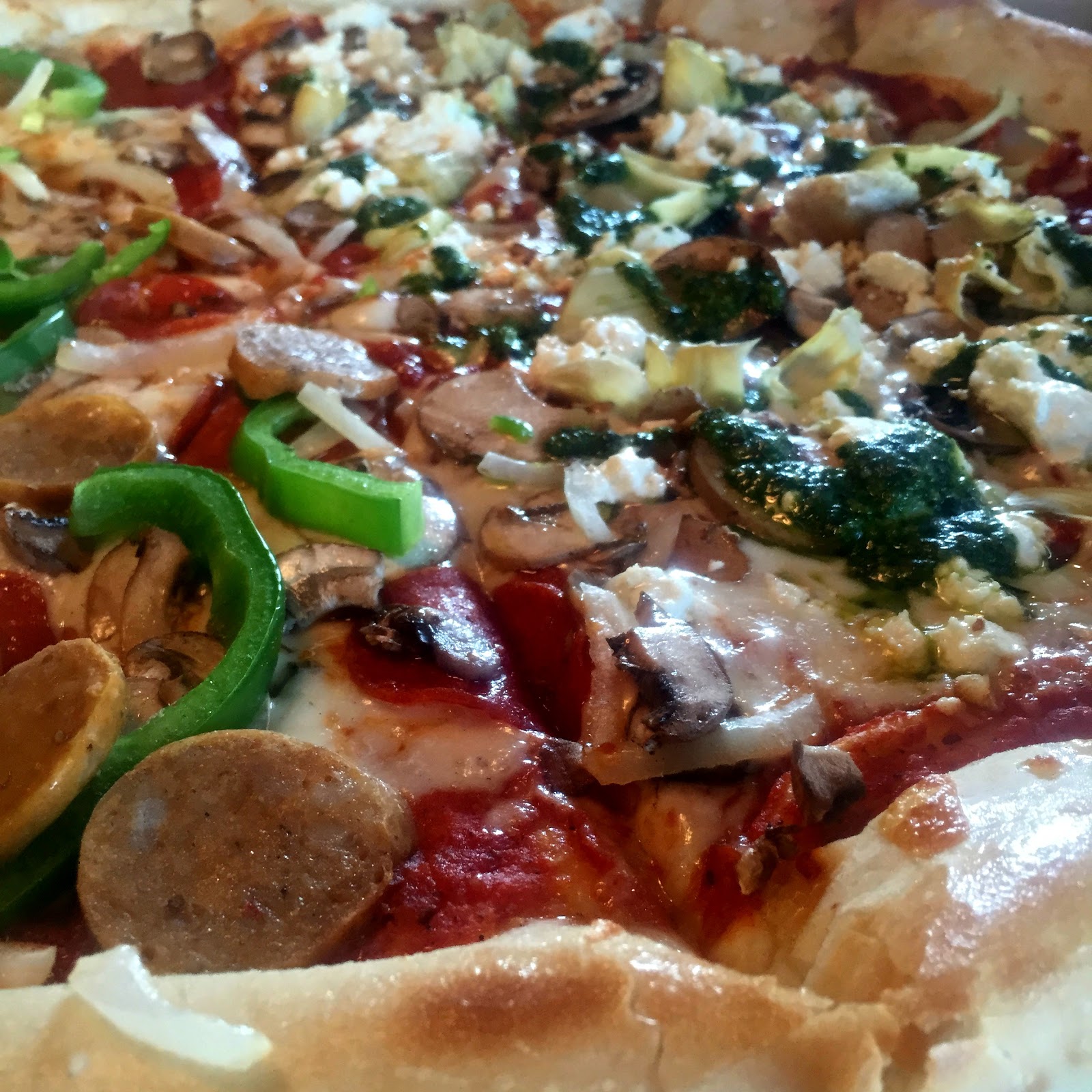 The crust might be my favorite thing about Dewey’s – it’s light and fluffy – with a little buttery flavor on top. I always find it funny that they have the cheese under the toppings – when I make pizza – cheese is always the last topping. How about you? 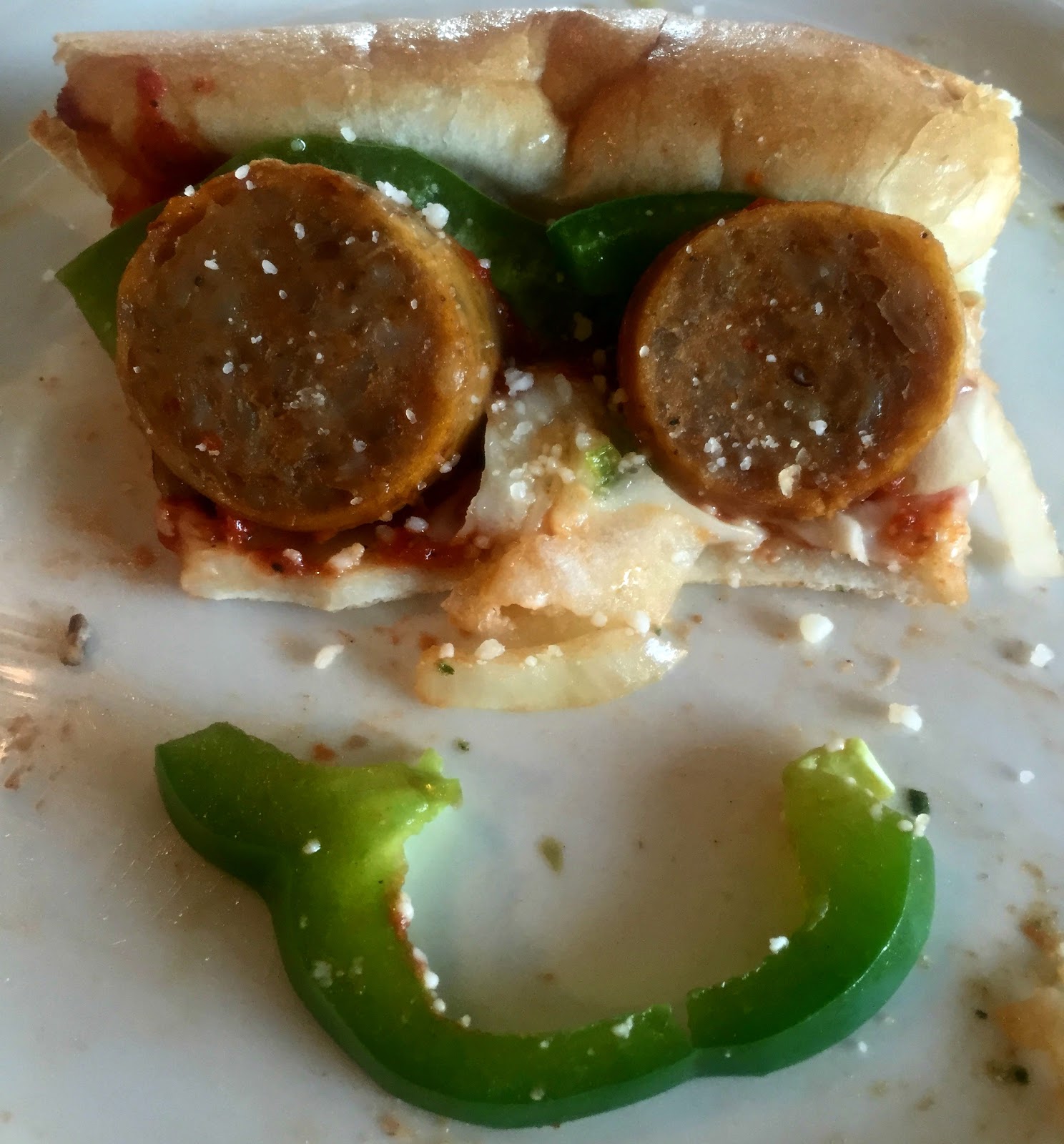 Kristin even discovered a little face friend in our pizza. 🙂 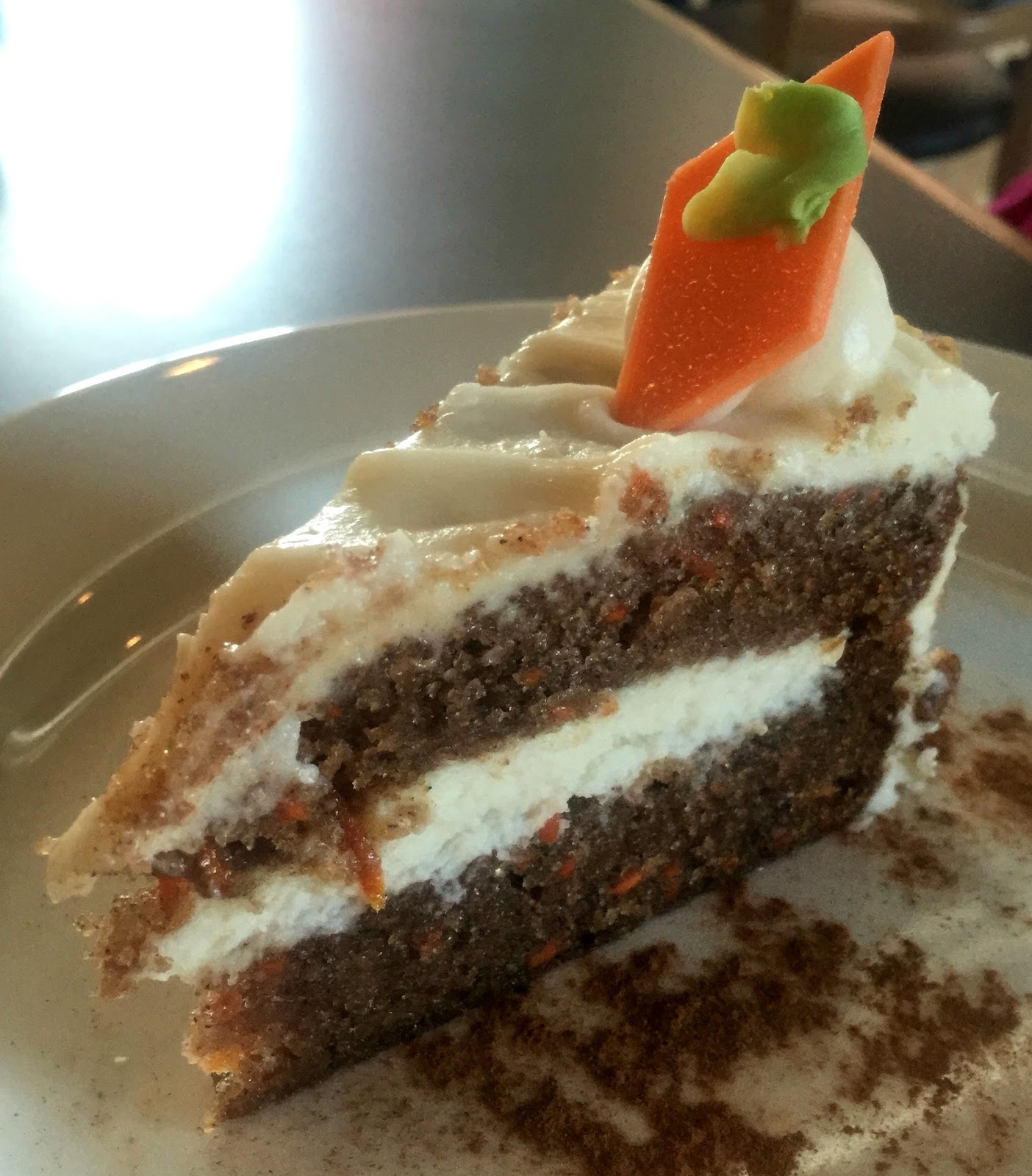 The manager offered up dessert as well – and we couldn’t turn down carrot cake – I mean – who can?! Oh it’s so delicious! We shared a piece – they’re kind of small – (you never know – sometimes restaurants have ginormous pieces) – so if you’re hungry hungry – order your own piece. 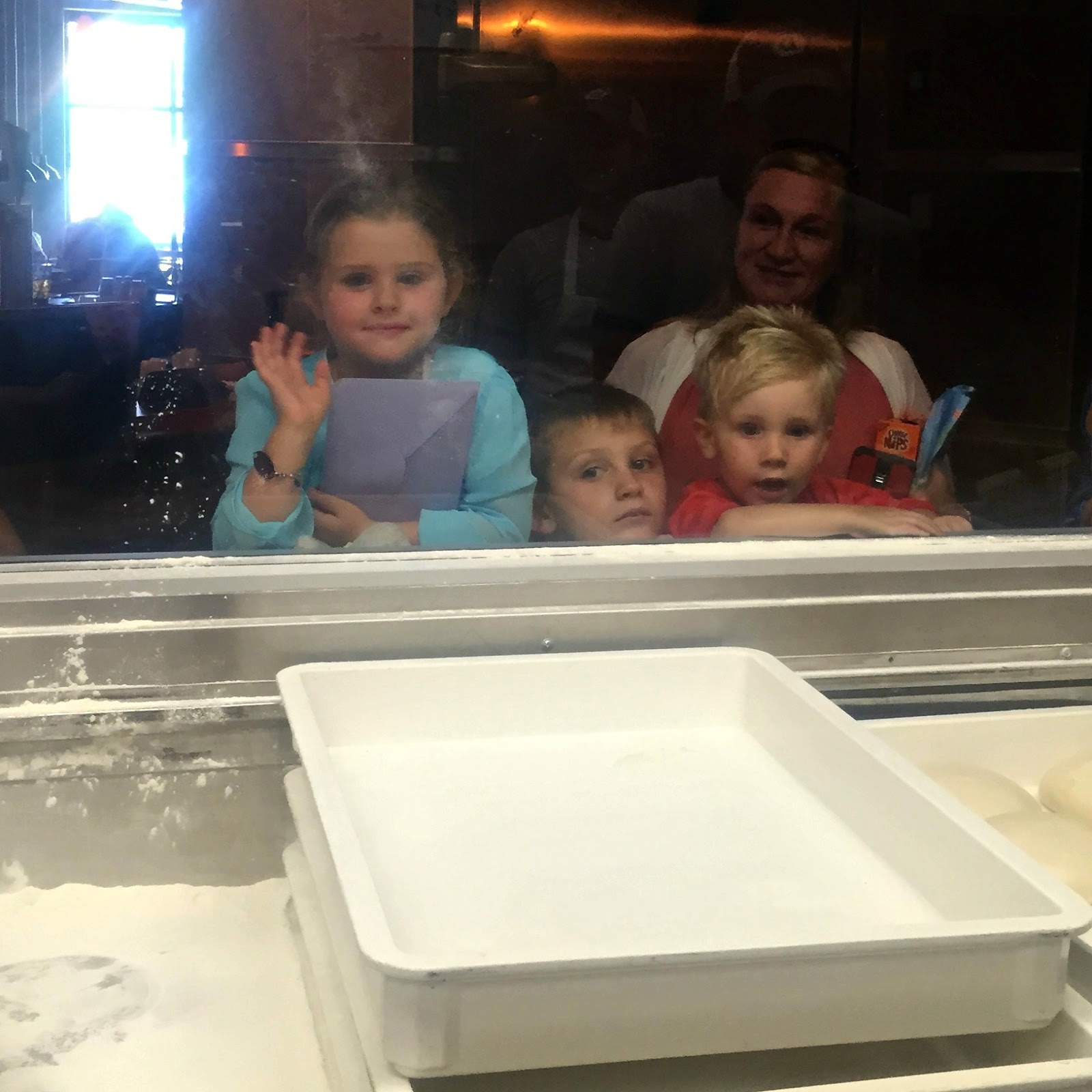 What else is fun about Dewey’s? Watching them make your pizza! That’s right – the huge pizza window is there – always full of little ones watching in amazement. The staff are great with the kids and it’s a favorite stop. Back home in Iowa – my favorite pizza has a big window as well – so much fun!

But today – the Dewey’s staff wasn’t going to be the only ones with their hands in the dough! 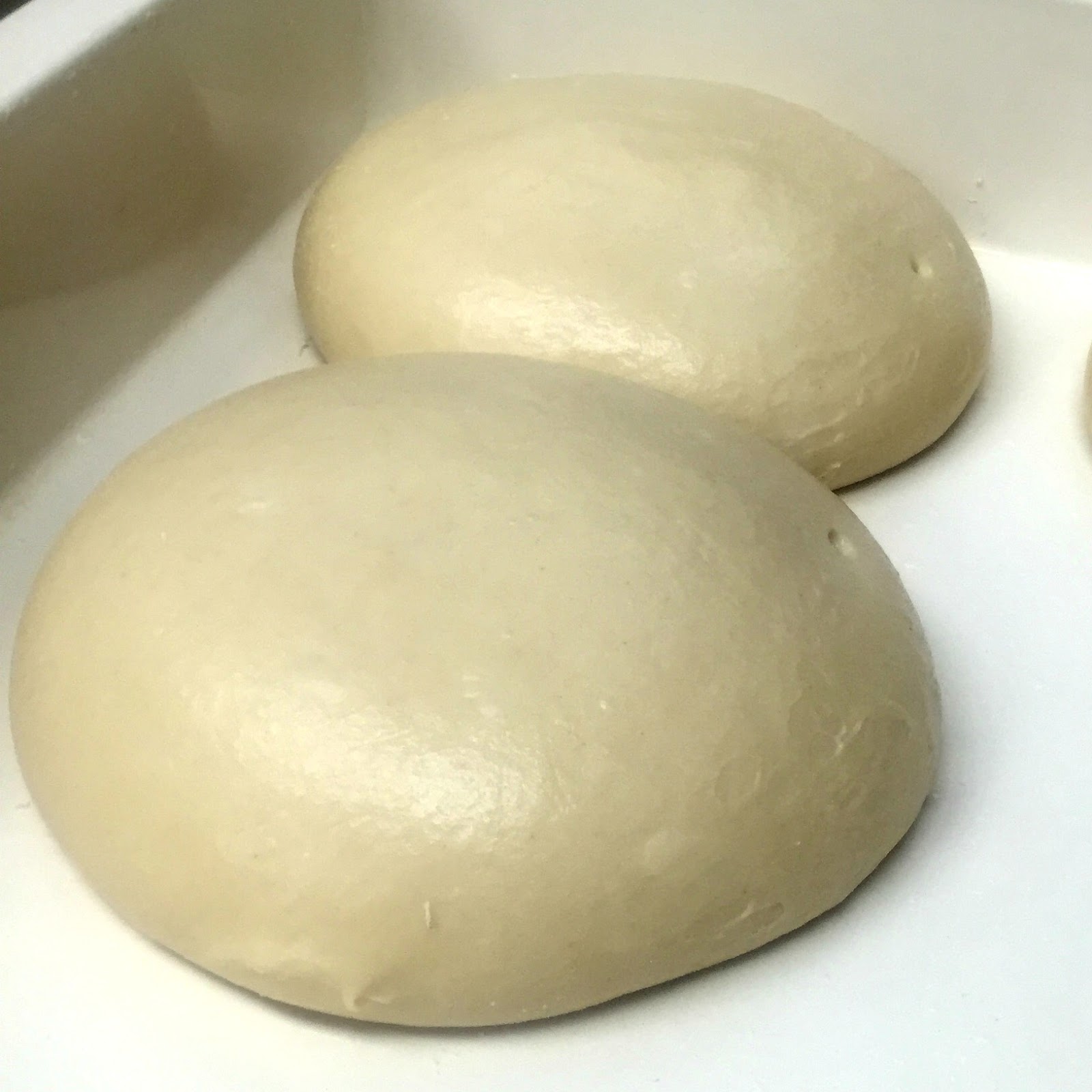 First you start with a big dough ball – there are trays and trays of these delights. 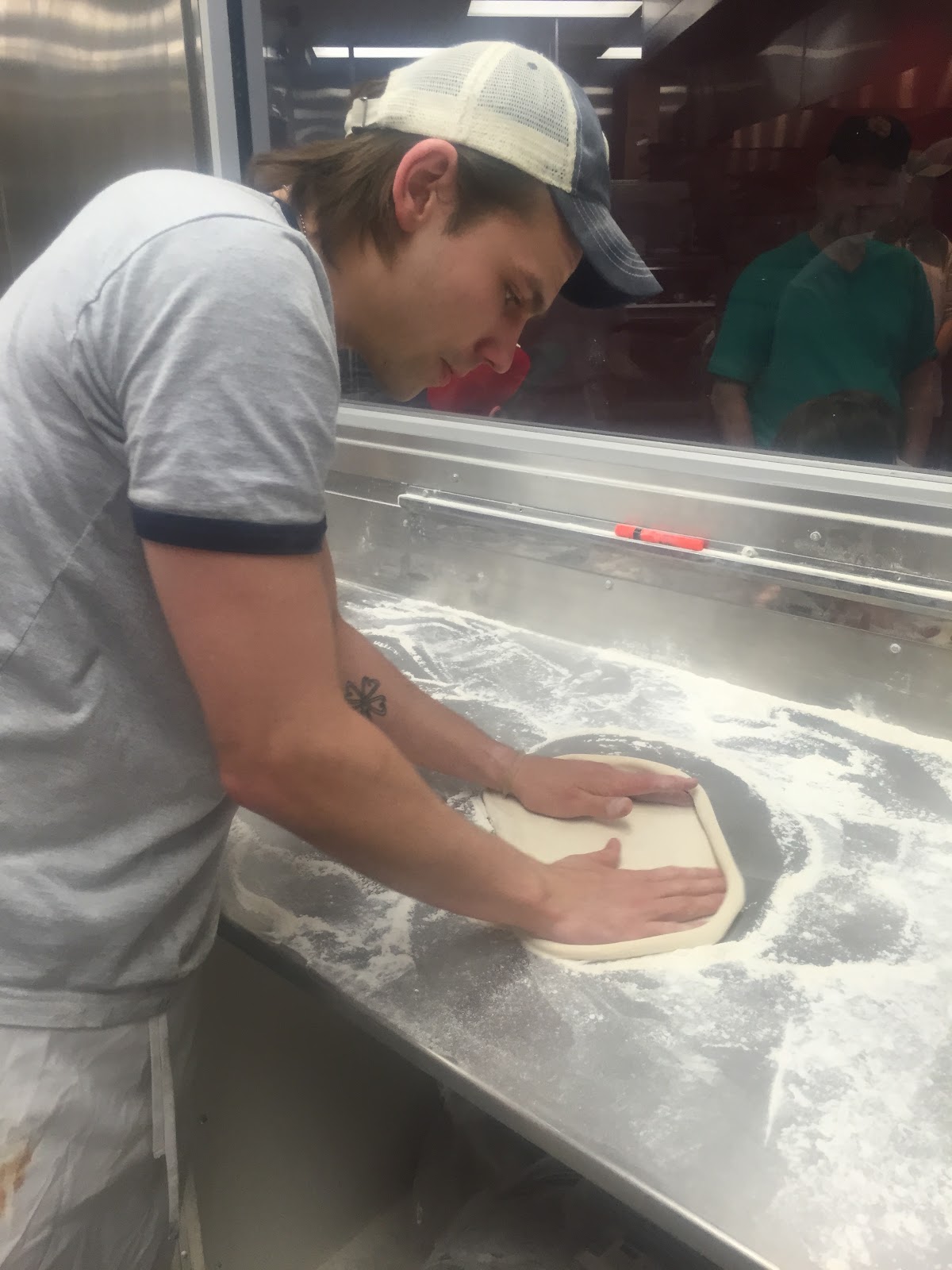 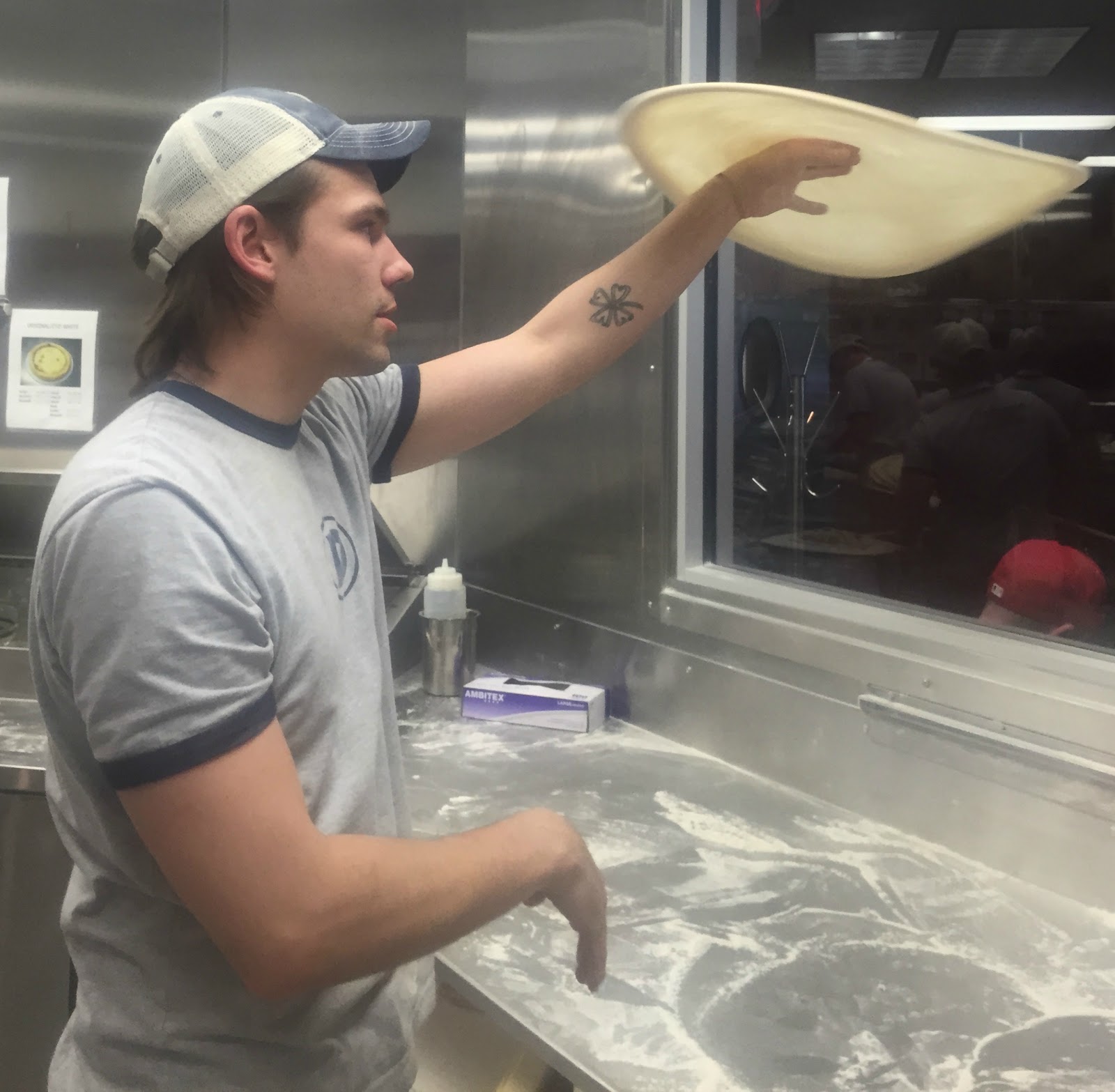 The kitchen manager was showing us around and teaching us how to toss dough. There’s stretching, spinning and tossing. 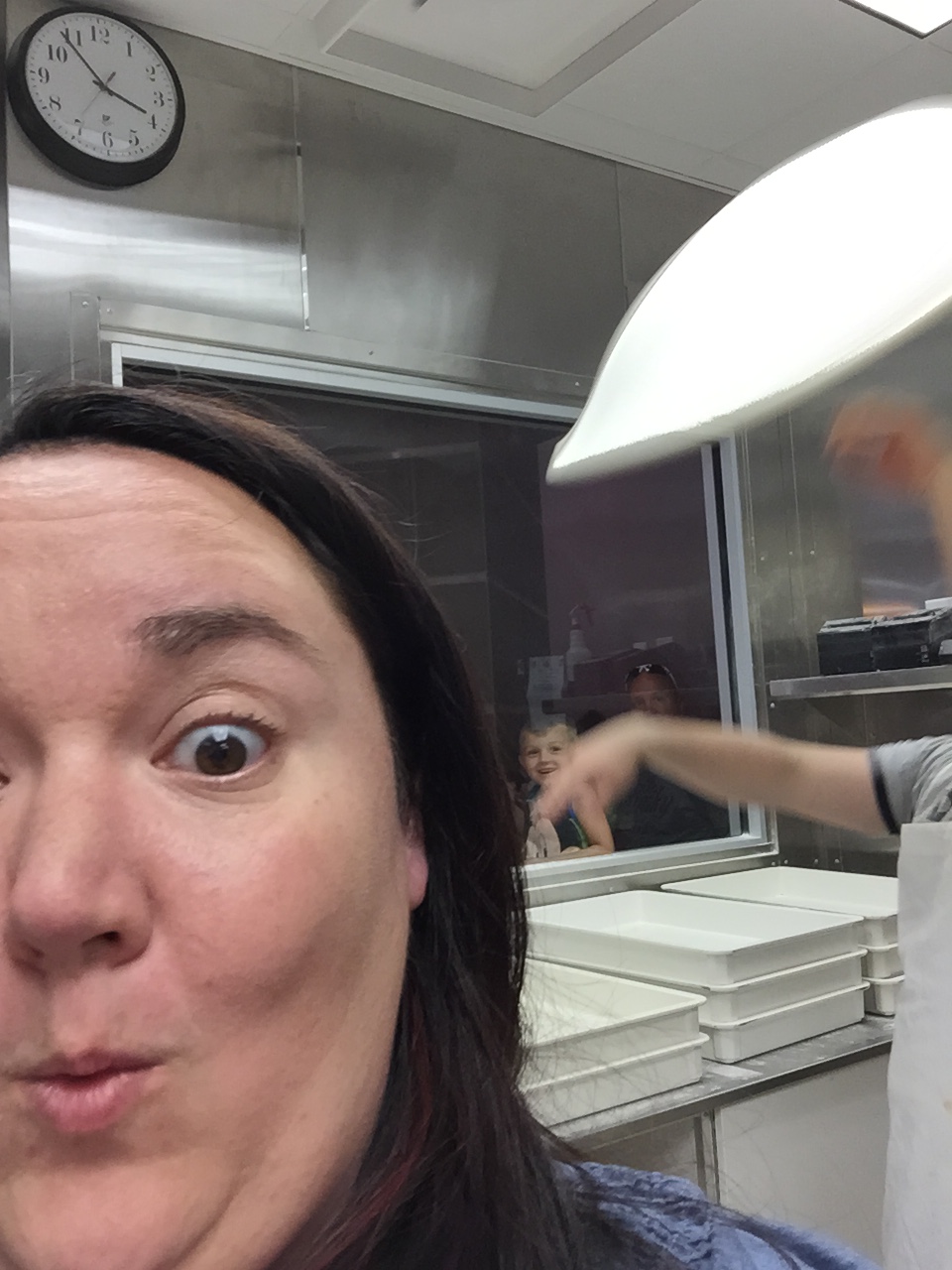 Here I am – selfieing while the flipping and spinning is going on. It’s pretty amazing – right? 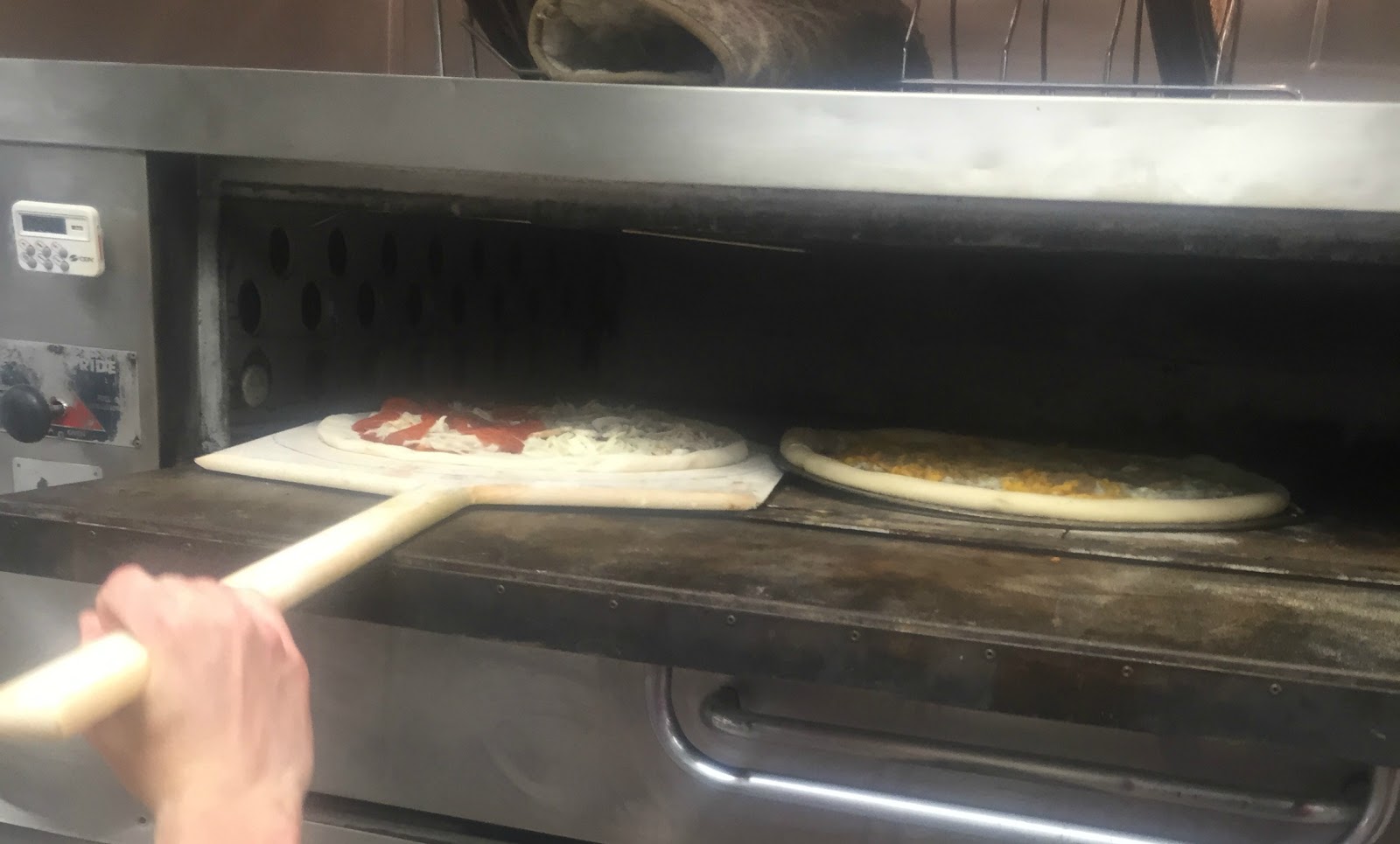 They made us an extra pizza to show us the process – so there’s our mushroom/cheese pizza launching into their giant pizza ovens. 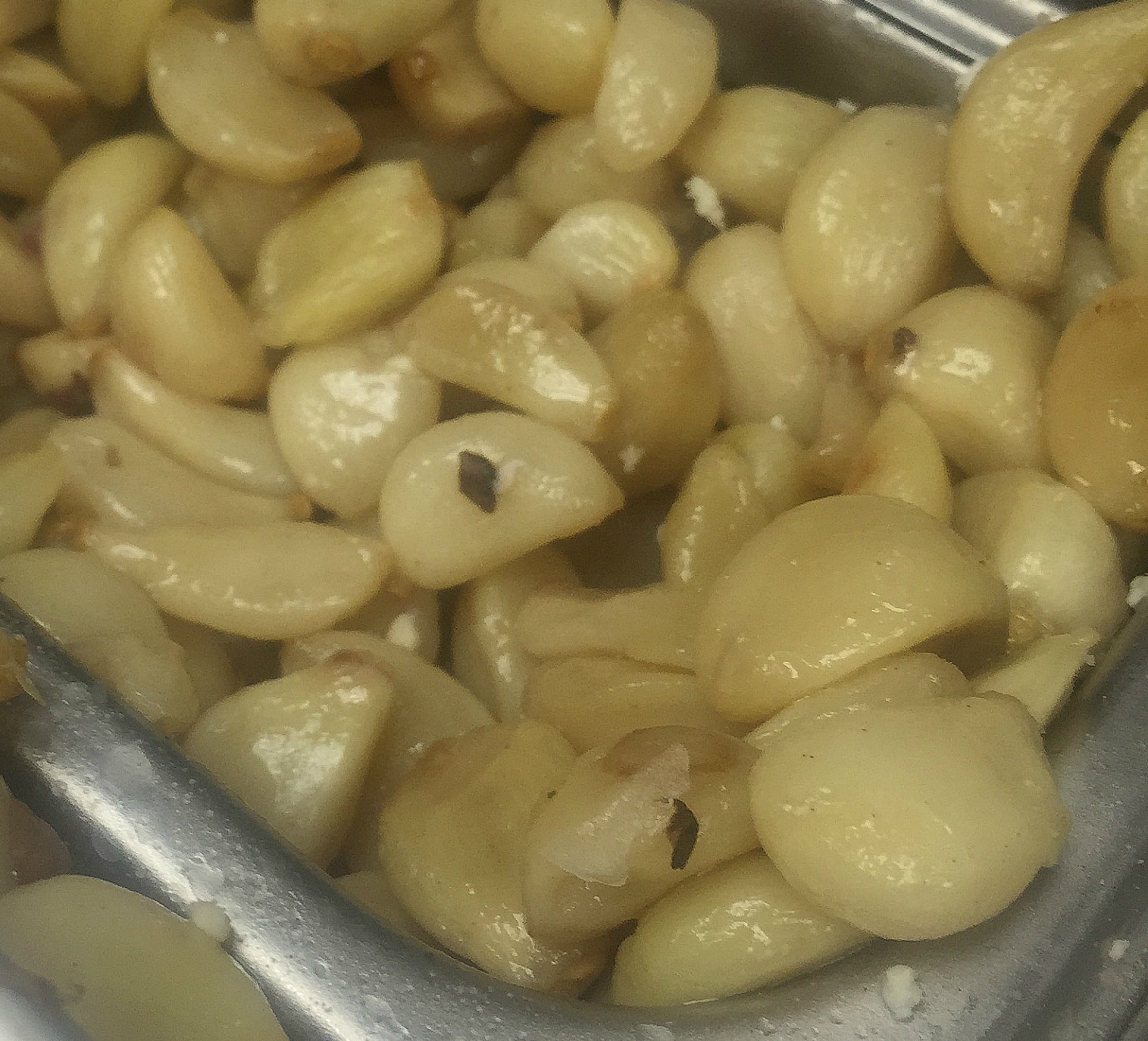 Oh – and when you walk by this on the ingredients table – you can’t just walk by. I mean – how many times you just see a vat of roasted garlic cloves?! Kristin held me back from just dunking my head in like it was a game of Bob for Garlic waiting for me. Thanks Hussy! 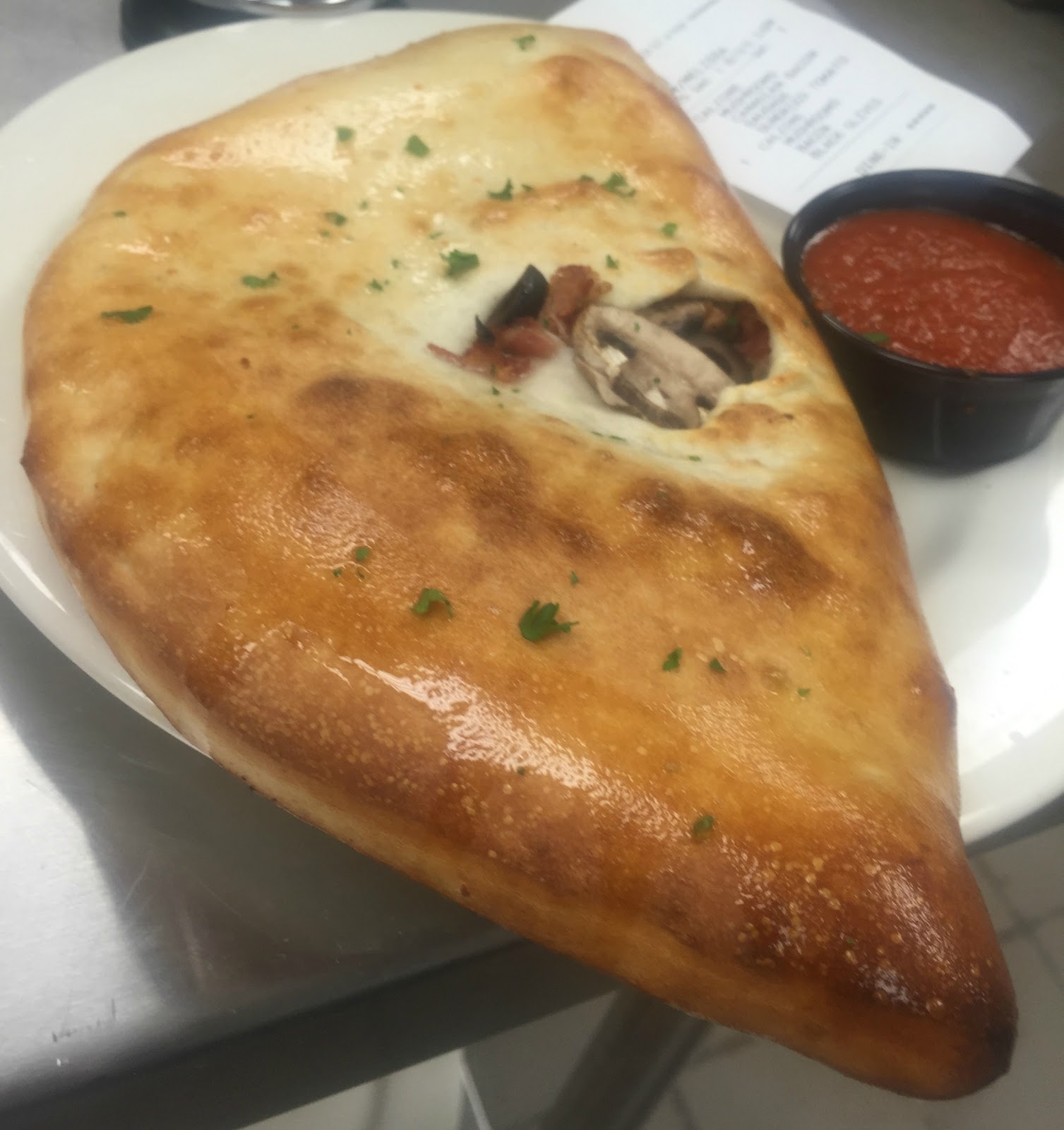 We also saw one of their yummy calzones coming out of the oven. If you haven’t had the calzone – try it – so delicious!!!! Great for sharing too!

But now the time had come… 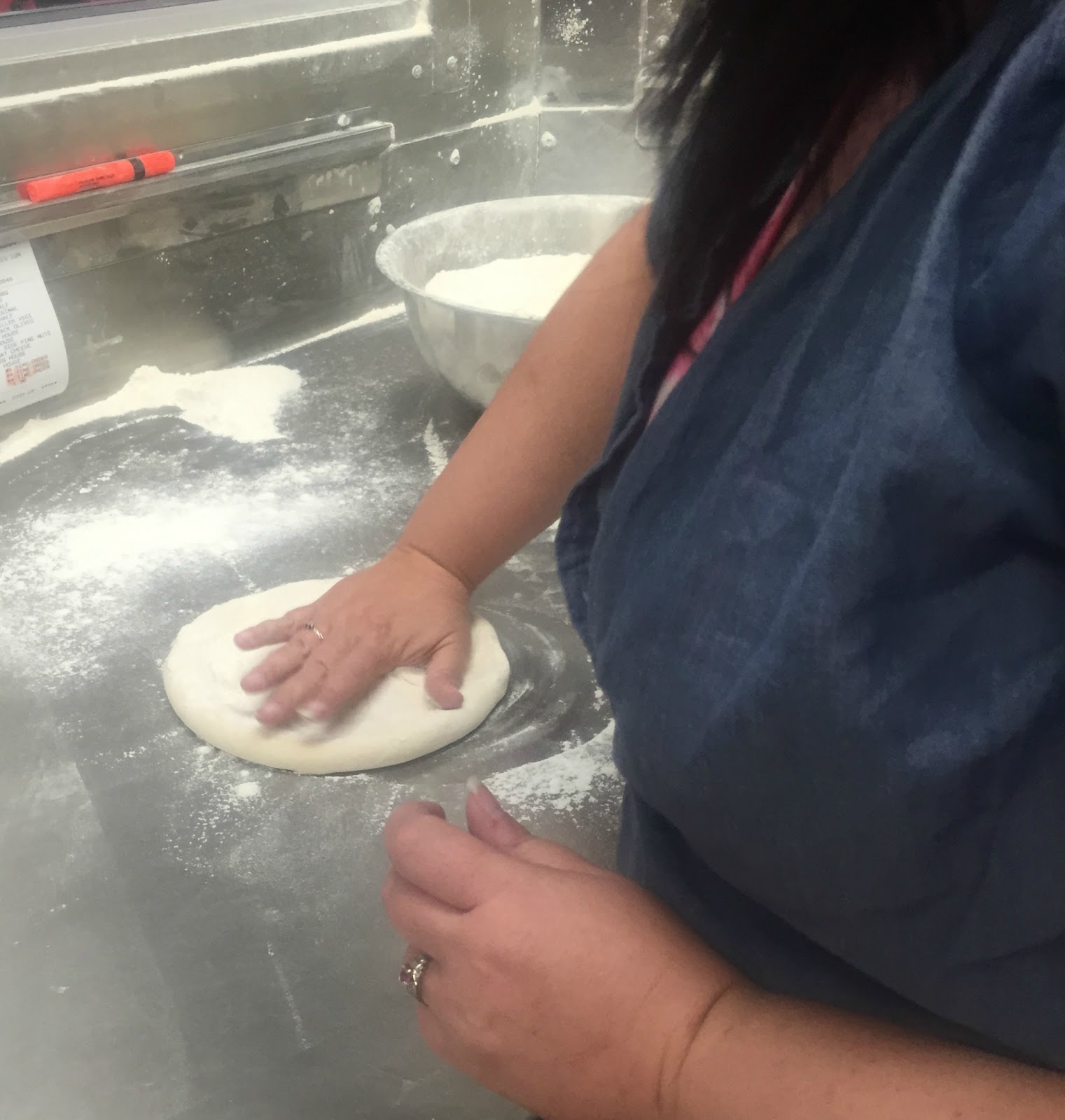 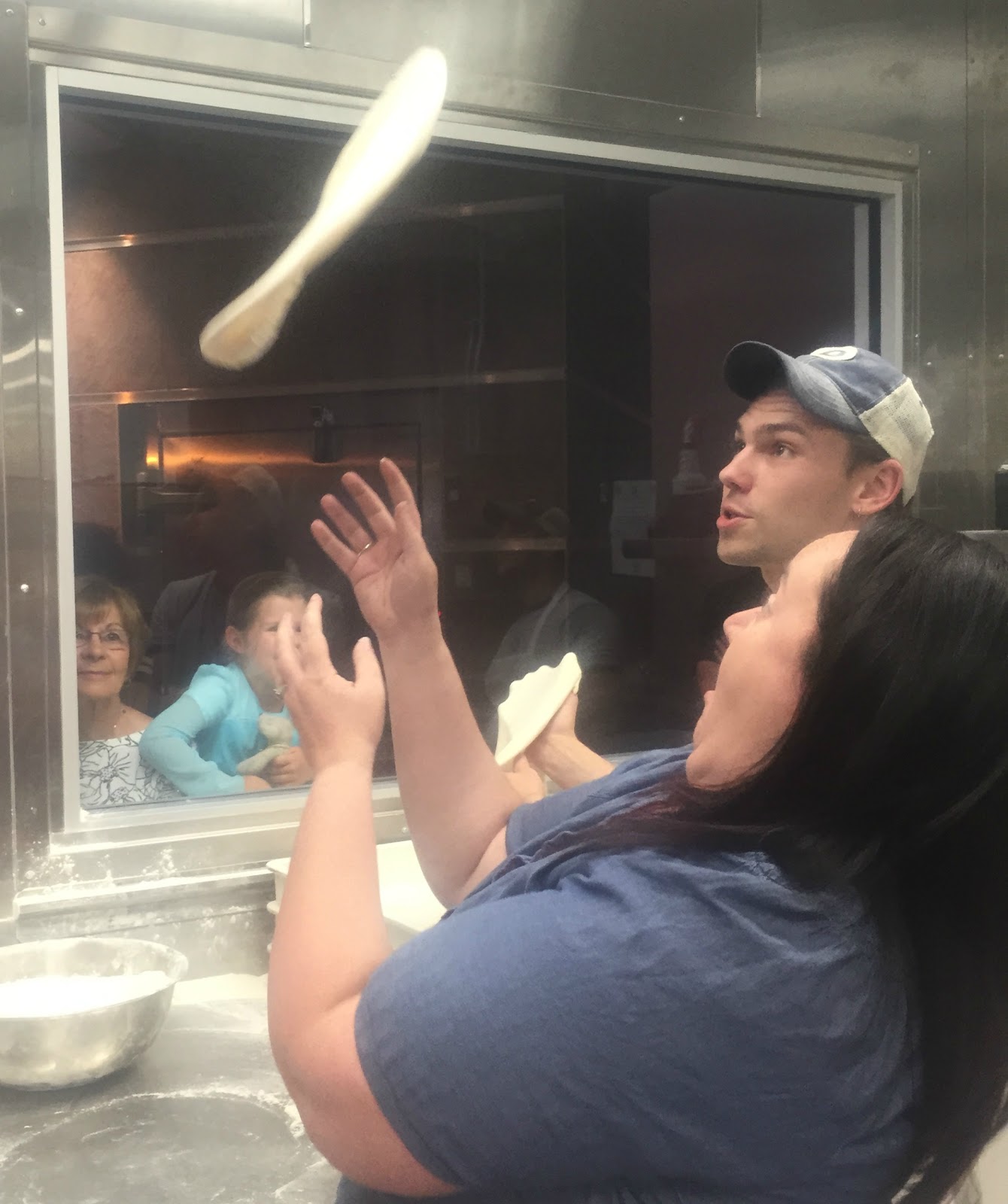 and toss!
That terrified look is pretty much the same one during every athletic event in every gym class of my entire life. I wasn’t much for sports – I mean – I love sports – I know them – I watch them – but imagine that face as a softball is heading right towards you. It’s not pretty.

And now – cuz that photo just wasn’t enough – here’s video of my humiliating pizza tossing. Cross this off the list of “jobs I might try someday”. 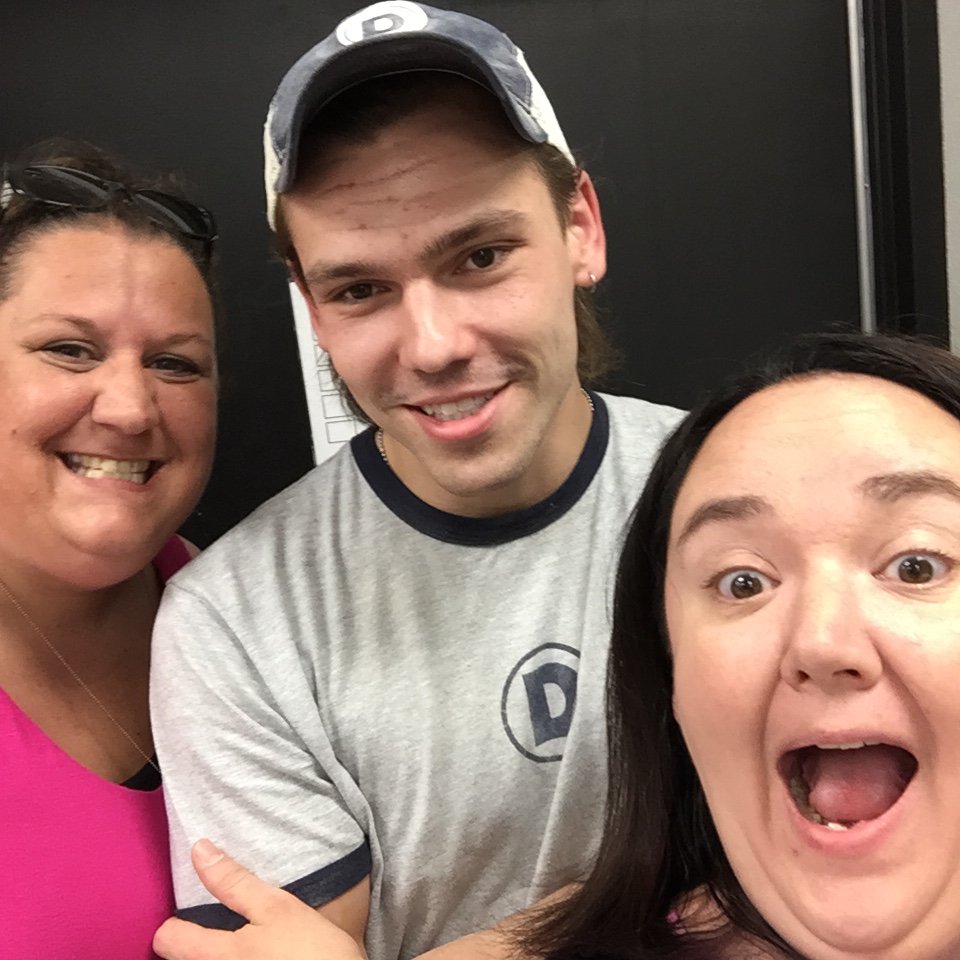 Thanks again for the tour and the pizza tossing lessons – it was a great time. And if you’re near Greene Township – check out the new Deweys – or any of their other locations in Cincinnati (or Dayton, Cleveland, Columbus or St. Louis!!!)