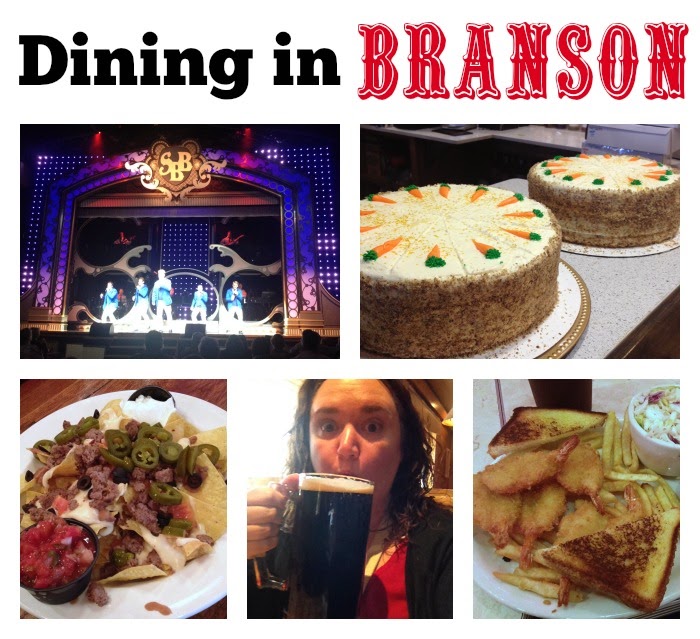 Recently I headed out to Branson, MO with my husband for a blogger trip. The trip was fun and very unique – but while there – I had to eat – right?! Here are the highlights of Dining in Branson! 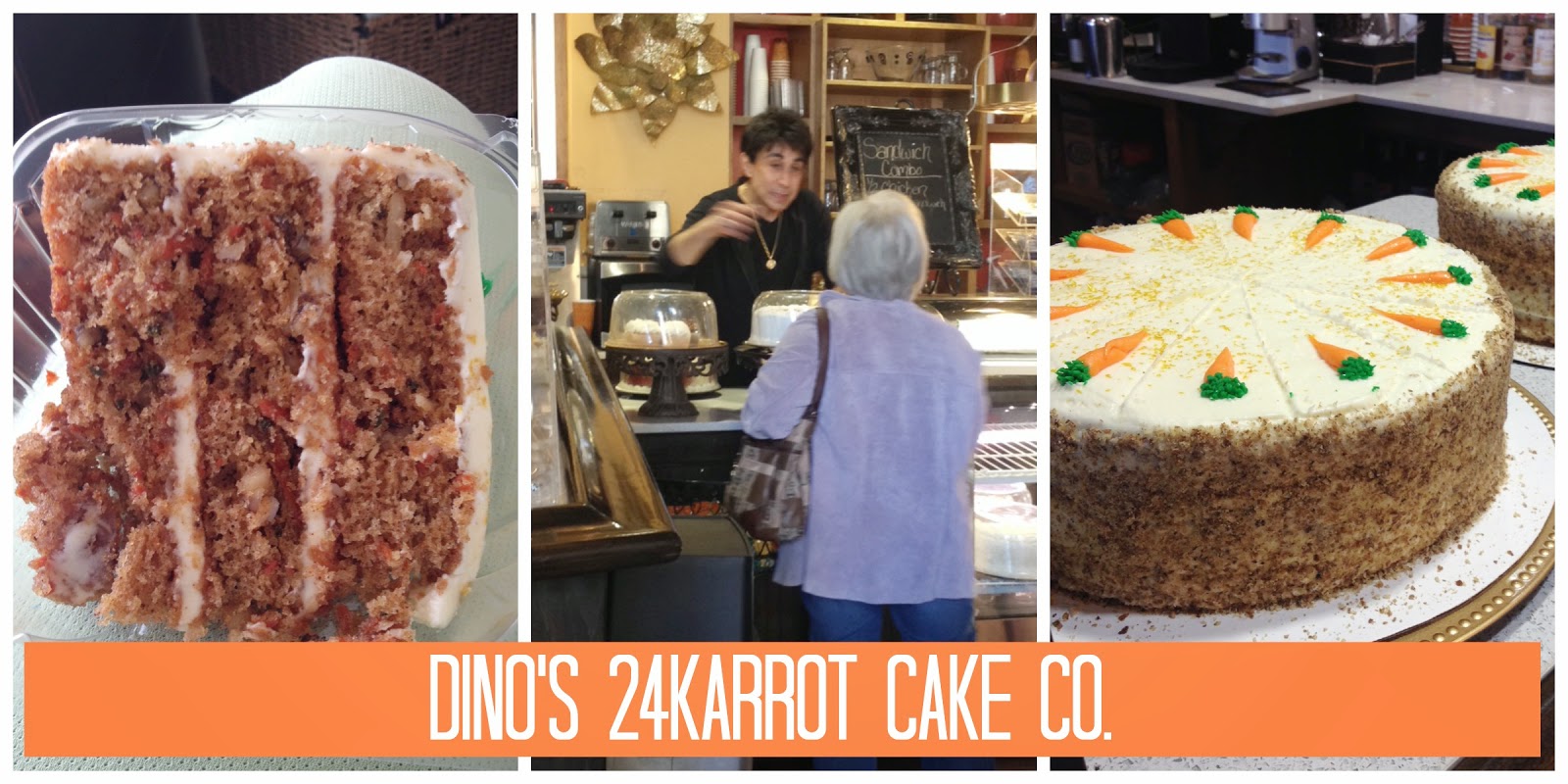 When you’re in the Vegas-like area of Branson – it’s hard to even fathom there’s anything else to the town – but there is. Just up the road – there’s a mall with a bunch of stores, restaurants and activities. And one of the dining items in this mall area is Dino’s 24Karrot Cake Co.

It’s very close to the center of the open-air mall. Dino is a showman in Branson and had made his carrot cake for friends & celebrities and then his wife convinced him to open a retail location. Thank you Mrs. Dino!!!

This was by far the best carrot cake I have EVER had in my life. They sell it in different sizes as well (mason jar, loaf, piece, full cake). If you’re in Branson – this is your first stop! 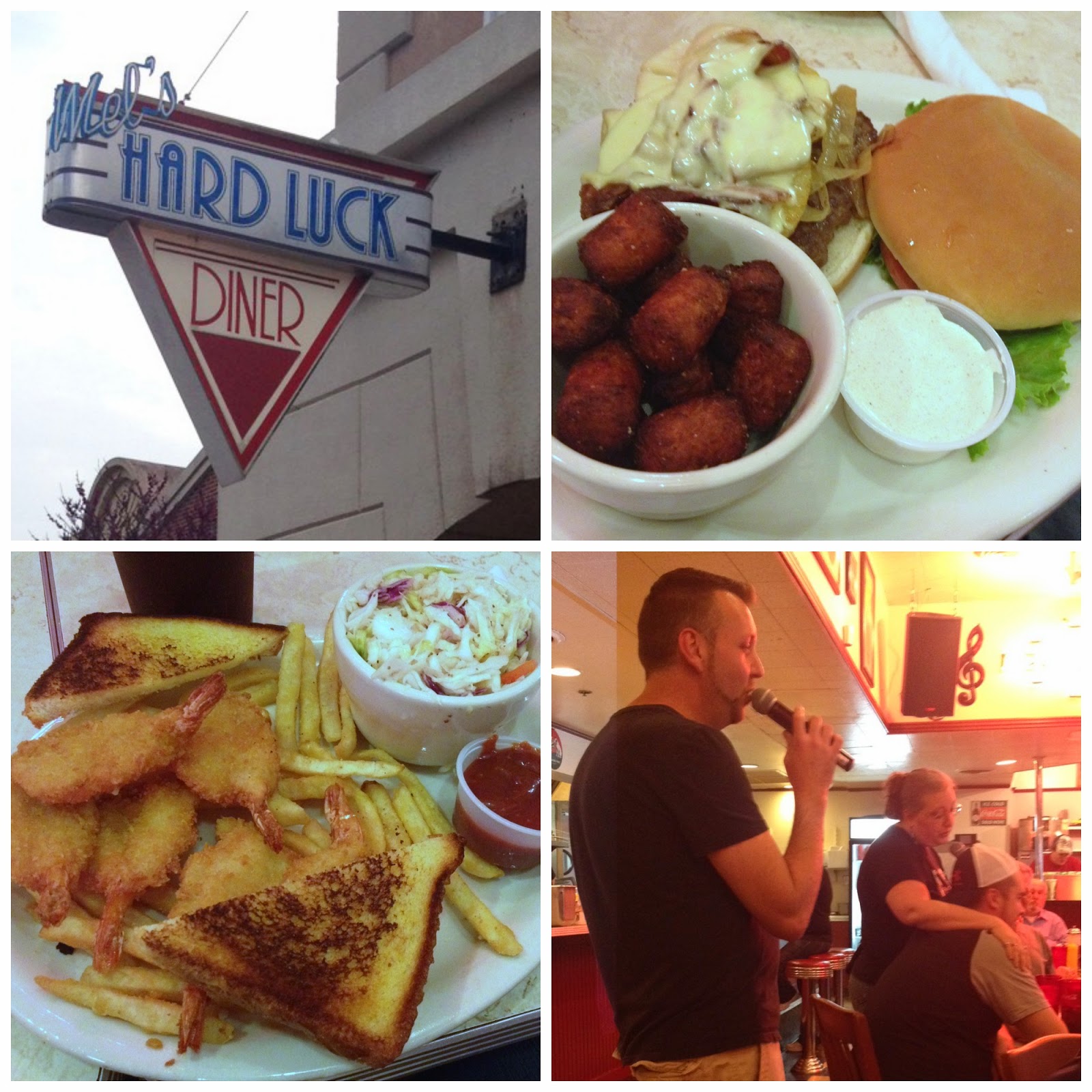 Our first stop in the city was Mel’s Hard Luck Diner. It’s home of the singing waiters – which is their main selling point. The servers take mini-breaks from serving to sing you songs from a variety of eras. The singing is about as good as the food – but it’s kitschy and fun.

The food was okay – I got the Sea of Love ($14.99) with shrimp, Texas toast, fries and slaw. The shrimp and fries were fine – the toast was a bit dry and the slaw was a vinegar style and didn’t have much flavor.

Larry got the Hawaiian Burger ($9.99) with sweet potato tots that came with a marshmallow cinnamon sauce. The burger was good (better than my selection) and the tots were awesome. The marshmallow sauce was really unique and tasty. 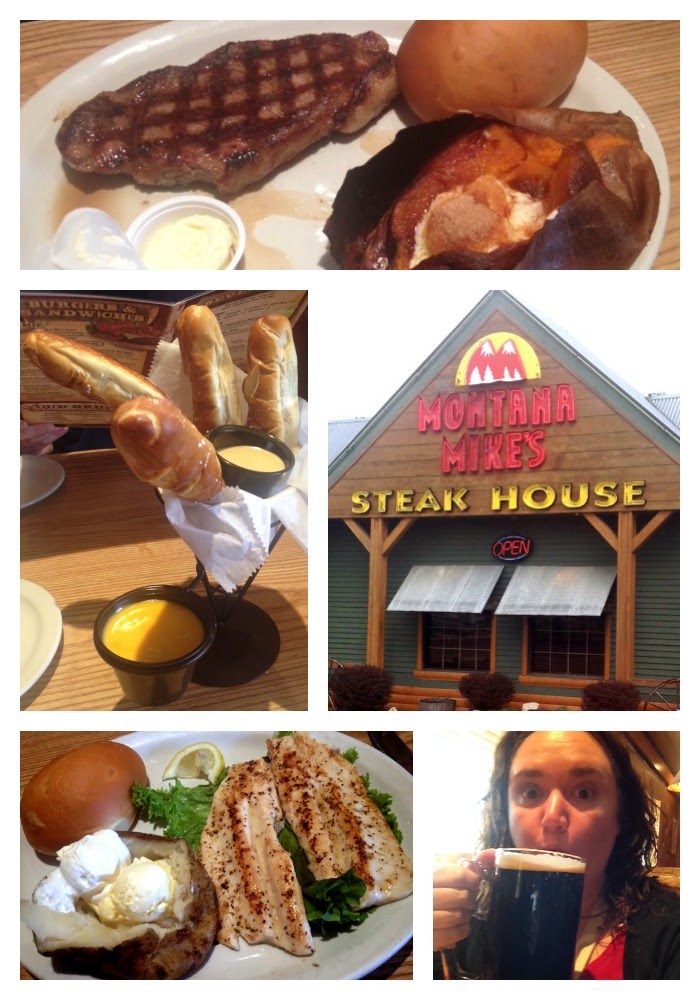 Thanks to the folks at Montana Mike’s in Branson for providing a gift certificate for us to try their food. We were really hungry for dinner and Larry wanted beer & beef! He went for steak & a sweet potato while I got the trout. Both were fine – nothing amazing but solid steakhouse meals. I think the trout was seasoned well and very light. We also had the pretzel appetizer and it was fine – served with queso & honey mustard – both were good. All in all, Montana Mike’s was a good option – comparable to most chain steakhouses. 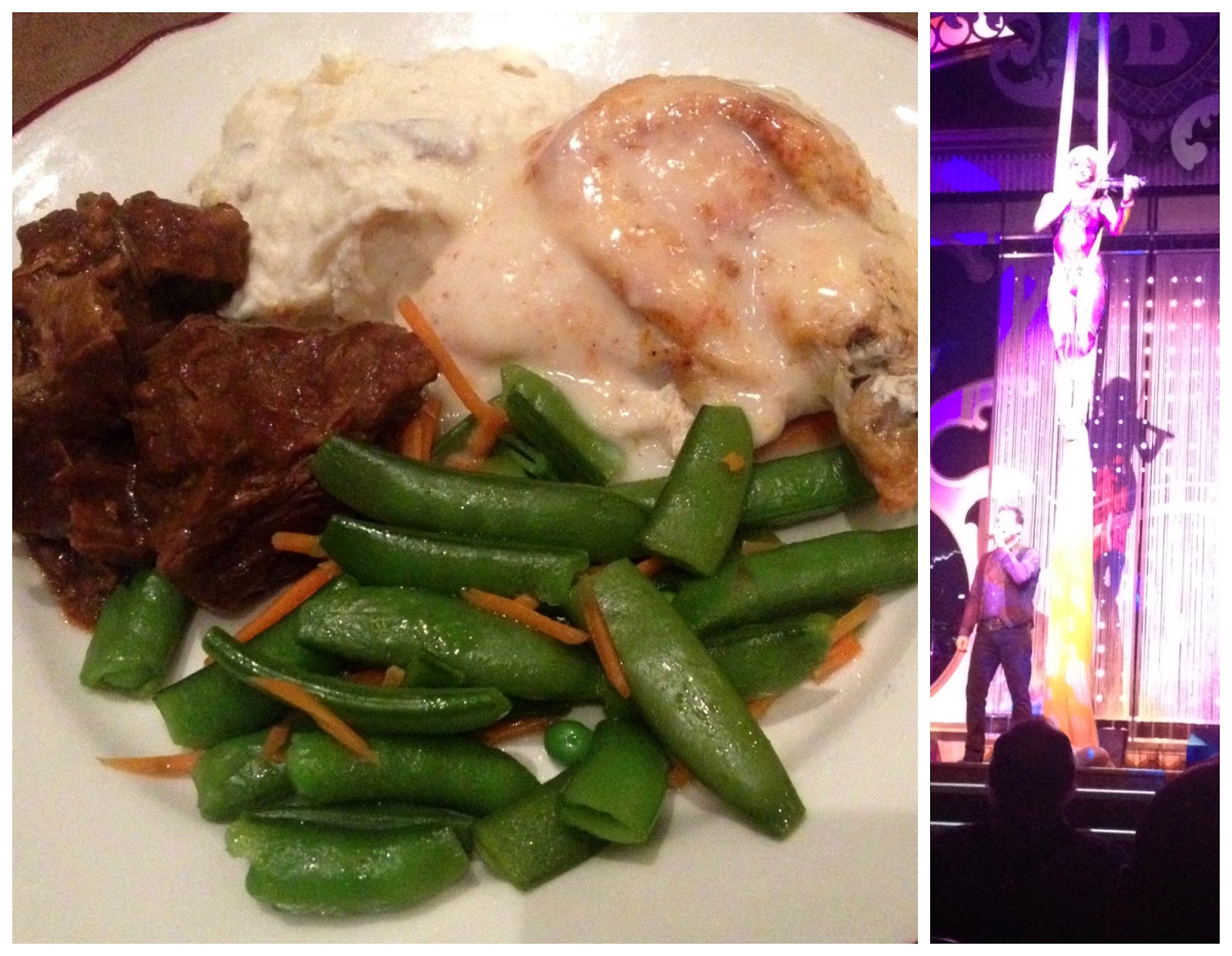 Another dining stop was the Showboat Branson Belle – it’s a riverboat dinner cruise. The typical dinner menu consists of a salad, corn biscuit (yum!), honey dijon chicken, simmered beef roast, garlic mashed potatoes, sugar snap peas and a lemon torte. My favorite part of the meal was by far the roast – it was delicious! Such a rich flavor and it fell apart even looking at it. Yum! All in all for a large scale meal served to a few hundred people at once – it’s pretty good. 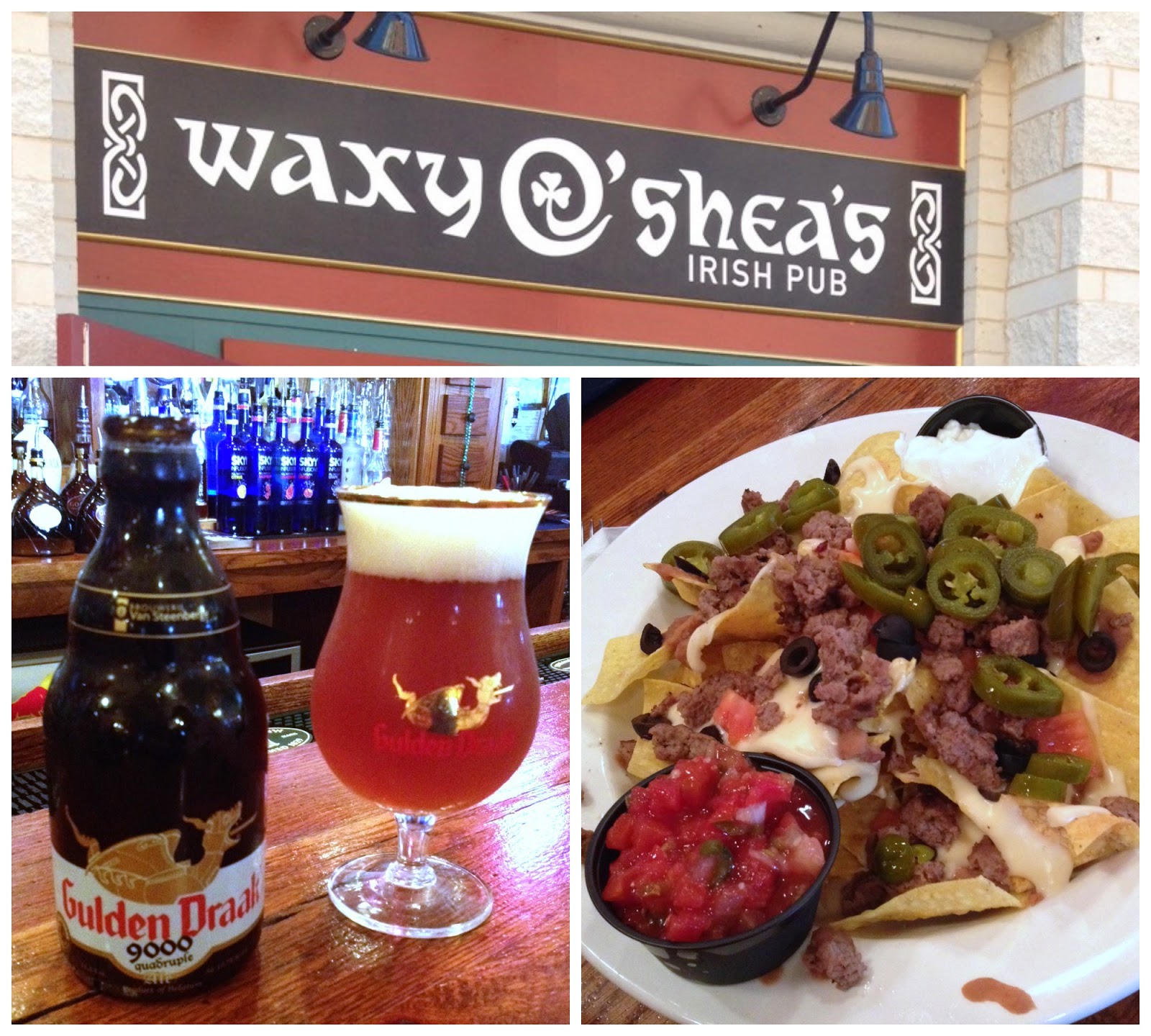 Last up for the weekend was Waxy O’Sheas – the Irish Pub in the mall area I mentioned earlier. Most of the Vegas-like area of Branson is fairly “dry” – so if you want to grab a beer – head on down to Waxy O’Sheas. Larry came across this really cool Gulden Draak 9000 – it’s expensive but it was some strong, good beer. I tried the nachos and they were pretty good! The guys next to us had just gotten their food when my nachos came and said “Well – we know what we’re ordering next time!”

Most of the food I had was fine – but the clear stand out was Dino’s 24Karrot Cake Company – do not miss it!


Disclosure: Some meals were provided by Visit Branson but all opinions are my own.