Subscribe
Many adventures mentioned in this post were provided free of charge. All opinions are my own. 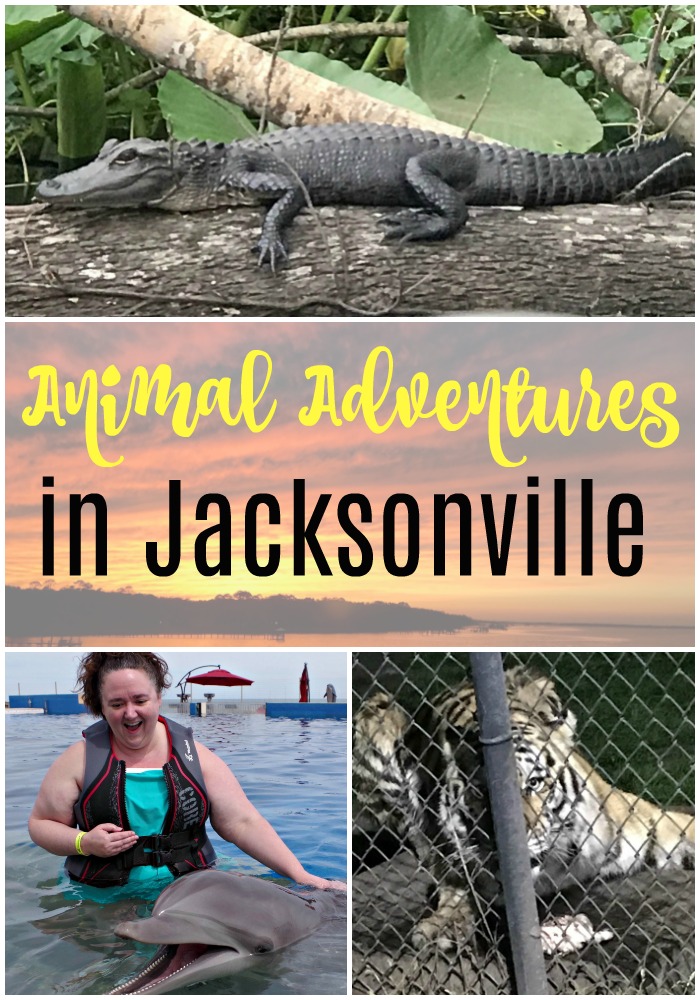 My husband and I are going on eight years of marriage (wow!) and have never taken a real vacation just the two of us! So when he turned 45 this year – I decided to surprise him with a long weekend to Florida – a little sun, a little sand and some relaxation time was just what we needed. And of course – if the Food Hussy is involved – you know there’s going to be food and animals. 🙂 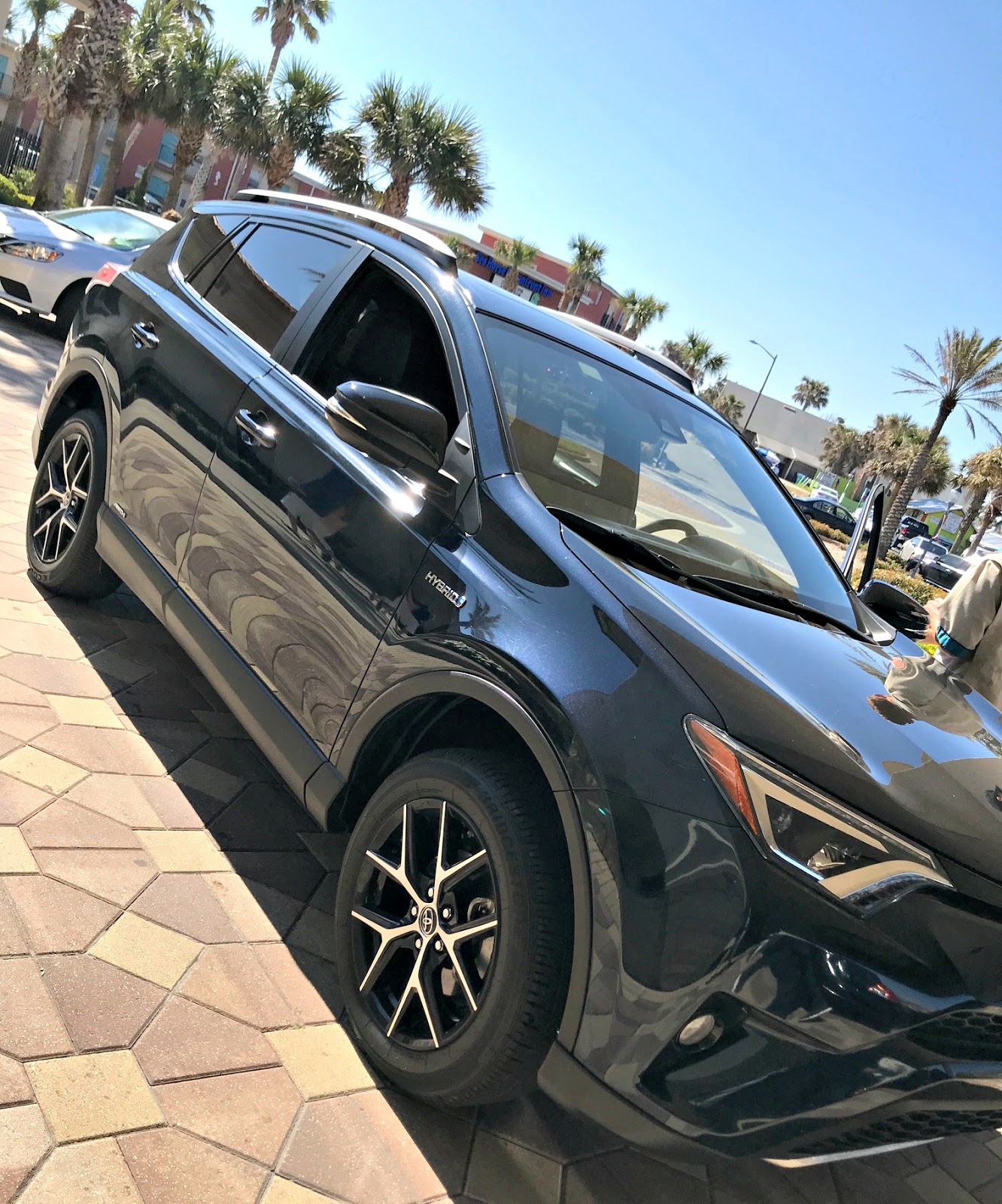 Normally if I’m on vacation – I’ll just Uber around rather than rent a car – but for the plans I had in the Jacksonville area – we really needed a car. Toyota was kind enough to share a new Toyota Rav 4 Hybrid for the weekend for us! It was fantastic! I have a Ford Escape and the two are very similar – the interior of this Rav was slick! We both really enjoyed it – especially the sunroof – perfect for a sunny weekend! And we did everything on one tank of gas – love the Hybrid! 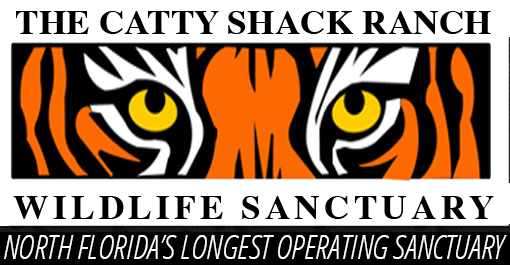 Our first stop was the Catty Shack Ranch – it’s a wildlife sanctuary in the Jacksonville area. They do amazing work in rescuing big cats from government seizures (i.e. illegal pets, crap “zoos”) and give them a forever home. 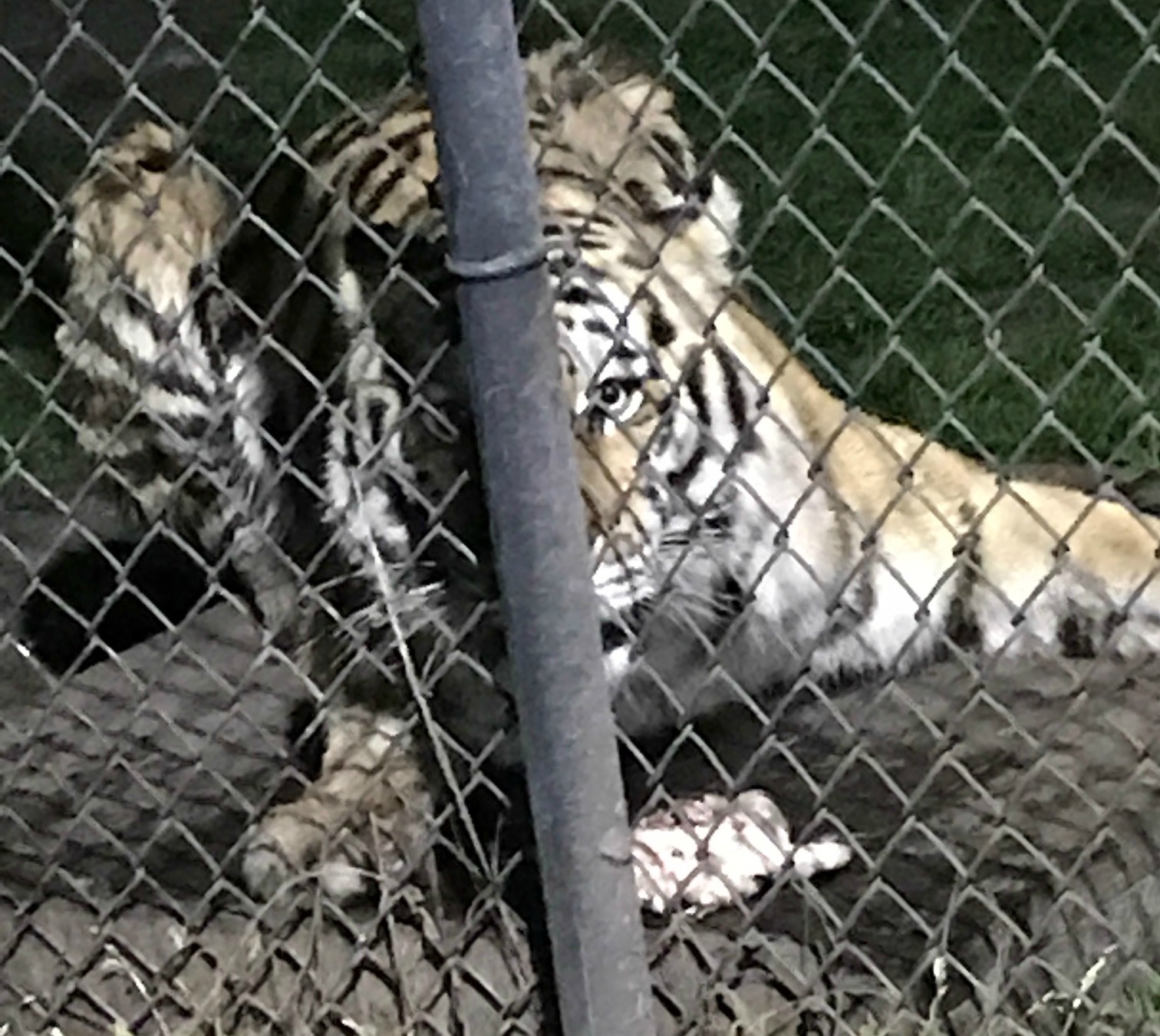 You can visit the sanctuary for a nominal donation fee – they get no government funding – and all the money goes to the care of the cats. We decided to go to a night feeding and it was AMAZING! These cats are in big enclosures and very well cared for. They have lions, tigers, pumas, panthers and more. Those are mainly what you’ll see in the night feeding – some of the smaller animals go in for the night. 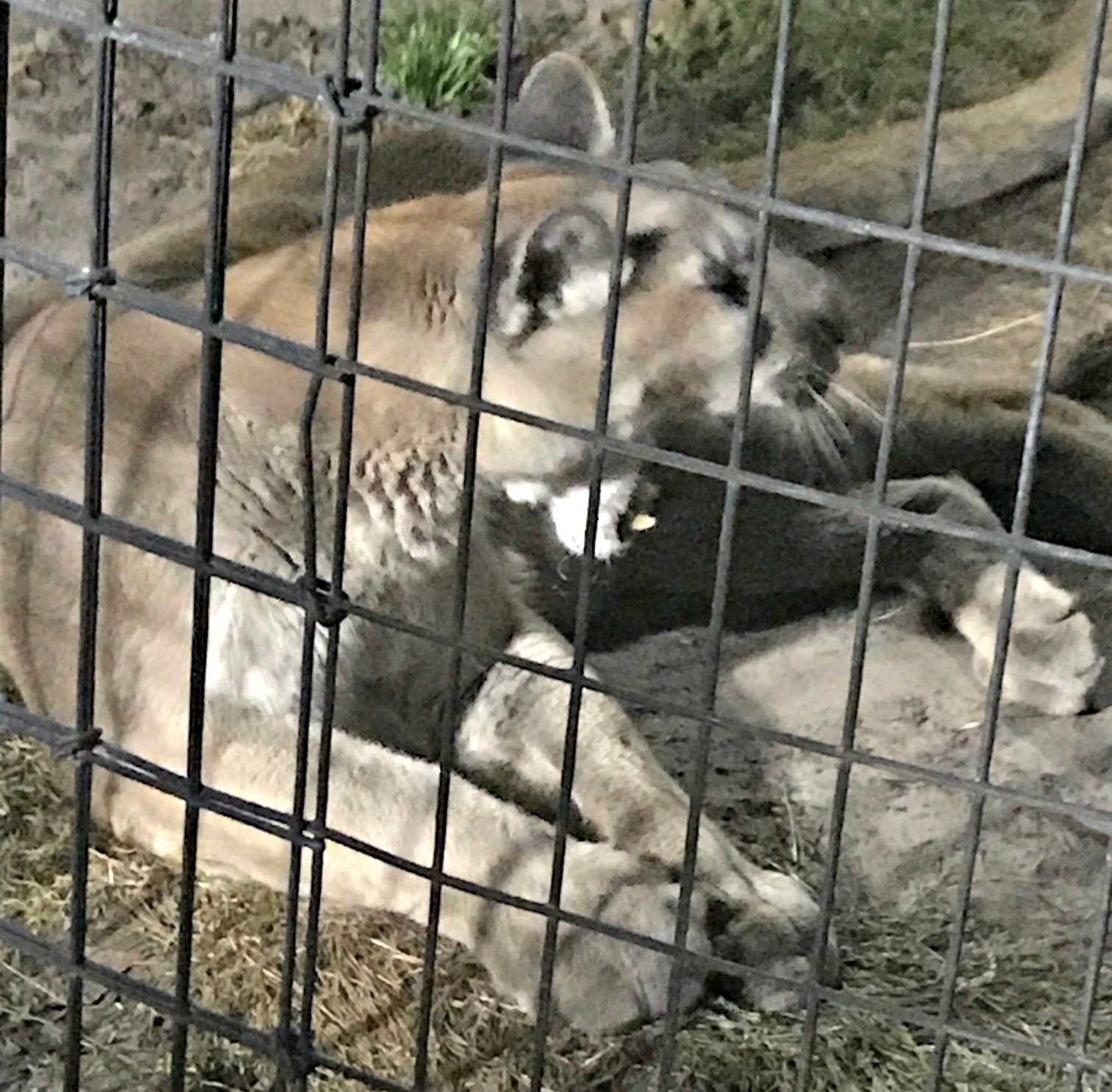 The puma was so pretty – and it was interesting to find out that cougars, pumas and mountain lions are all really the same animal – it just depends on what part of the country you find them as to what they’re called. This girl was purring so loud – which they told us that these are the biggest cats that purr. She’s a bit older and was pretty mellow – it’s fascinating to be able to be so close to the cats.

And I’ll say – I’ve been to a janky “wildlife” place before and the animals were kept in small concrete enclosures and it was pretty upsetting. Catty Shack is much different – the enclosures are very large and as natural as they can reproduce.

We got to see a night feeding at @cattyshackranch last night. They rescue big cats from government seizures (illegal owners, junk “zoos”) and give them a FOREVER home. It’s amazing work they do! #donate #bigcats #bigcatsofinstagram
A post shared by Heather Johnson (@foodhussy) on Mar 10, 2018 at 5:52am PST

But the star of the show is the night feeding – their caretakers love the cats so much. They have such a fondness as they feed them. It’s just amazing to see these animals go to town on that chicken was so cool! They had one enclosure with 5 “teenage girls” – they were running and playing – until the food came out – then it was all business.

I love the Catty Shack Ranch! It’s also a wonderful cause to support – you can adopt a cat and help support them financially. They are also the #1 attraction in Jacksonville on Trip Advisor. 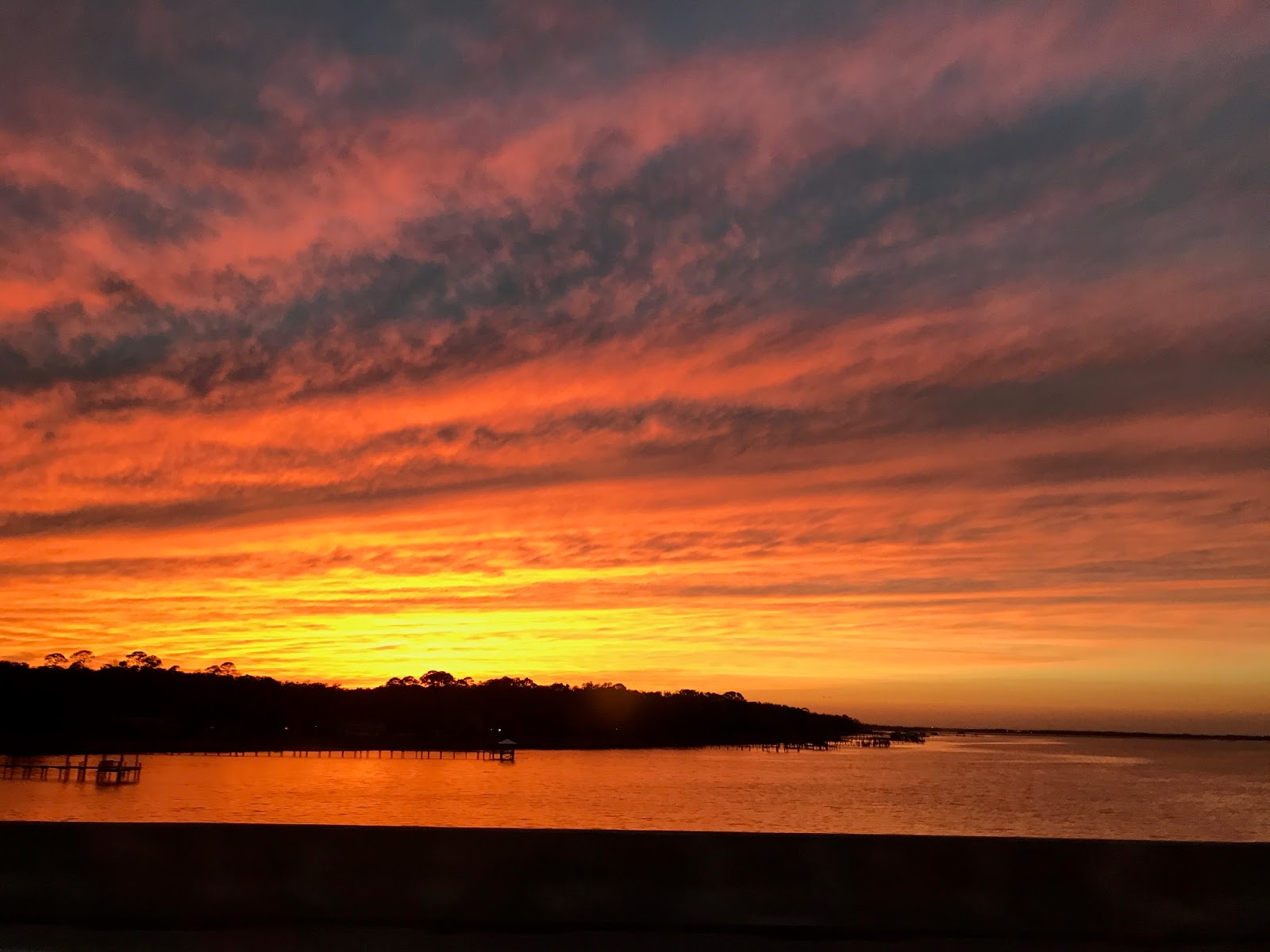 That night on the way back to our resort, we saw a gorgeous sunset and couldn’t help but snap some photos. I mean – how amazing is that?! 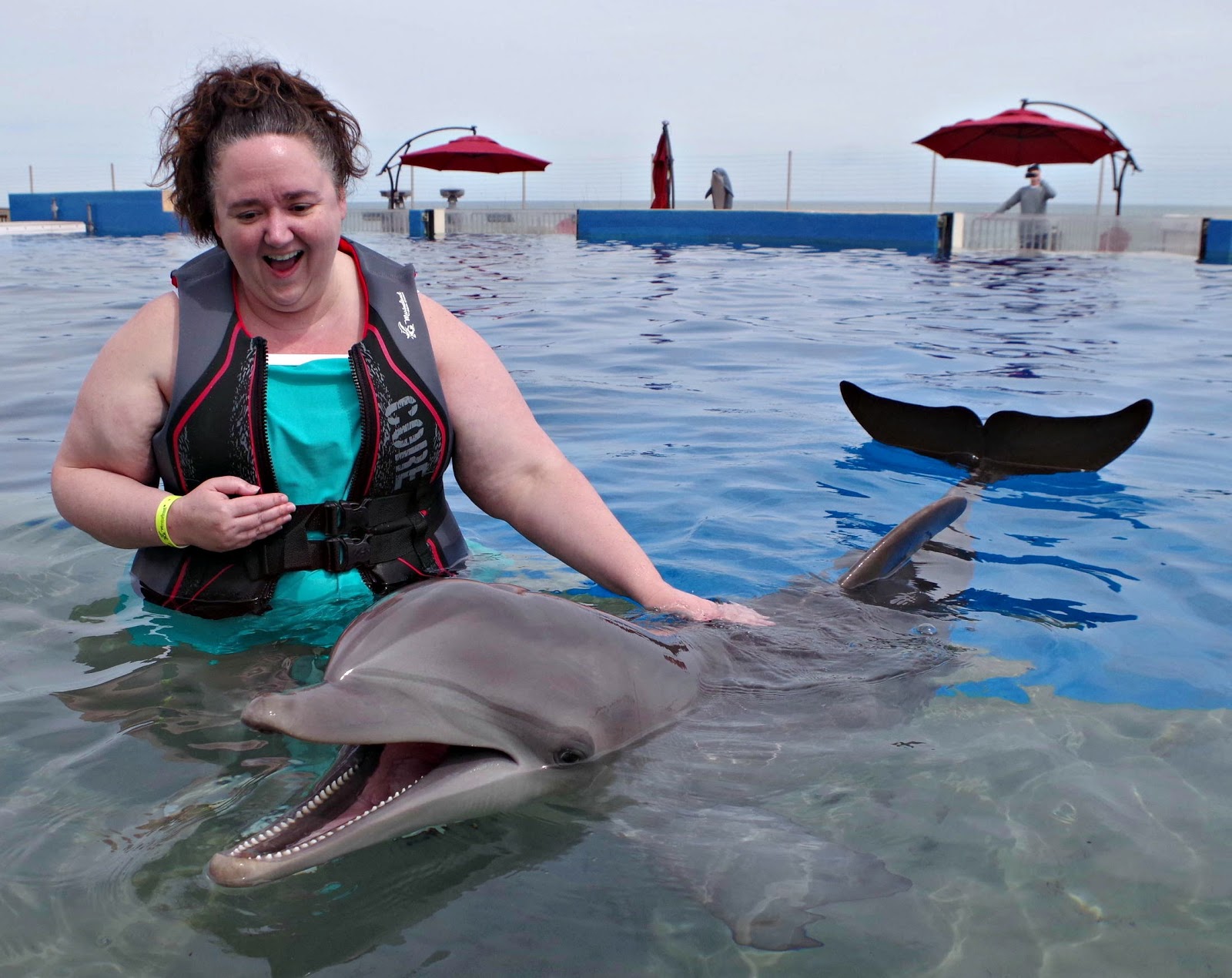 Saturday morning we headed about an hour and a half south of Jacksonville to Marineland. The drive to St. Augustine along the A1A is beautiful. There are multi-million dollar homes and numerous beach stops where you can pull off and take a walk in the sand!

Marineland is the world’s first oceanarium. They used to be focused more on performances but now focus on connecting people with the animals and educating visitors about how they can help preserve these beautiful animals.

Before I got in the water, the trainers gave me some background about dolphins and we went over the parts of the body and what we can do to help preserve their natural habitat. (Recycle!) 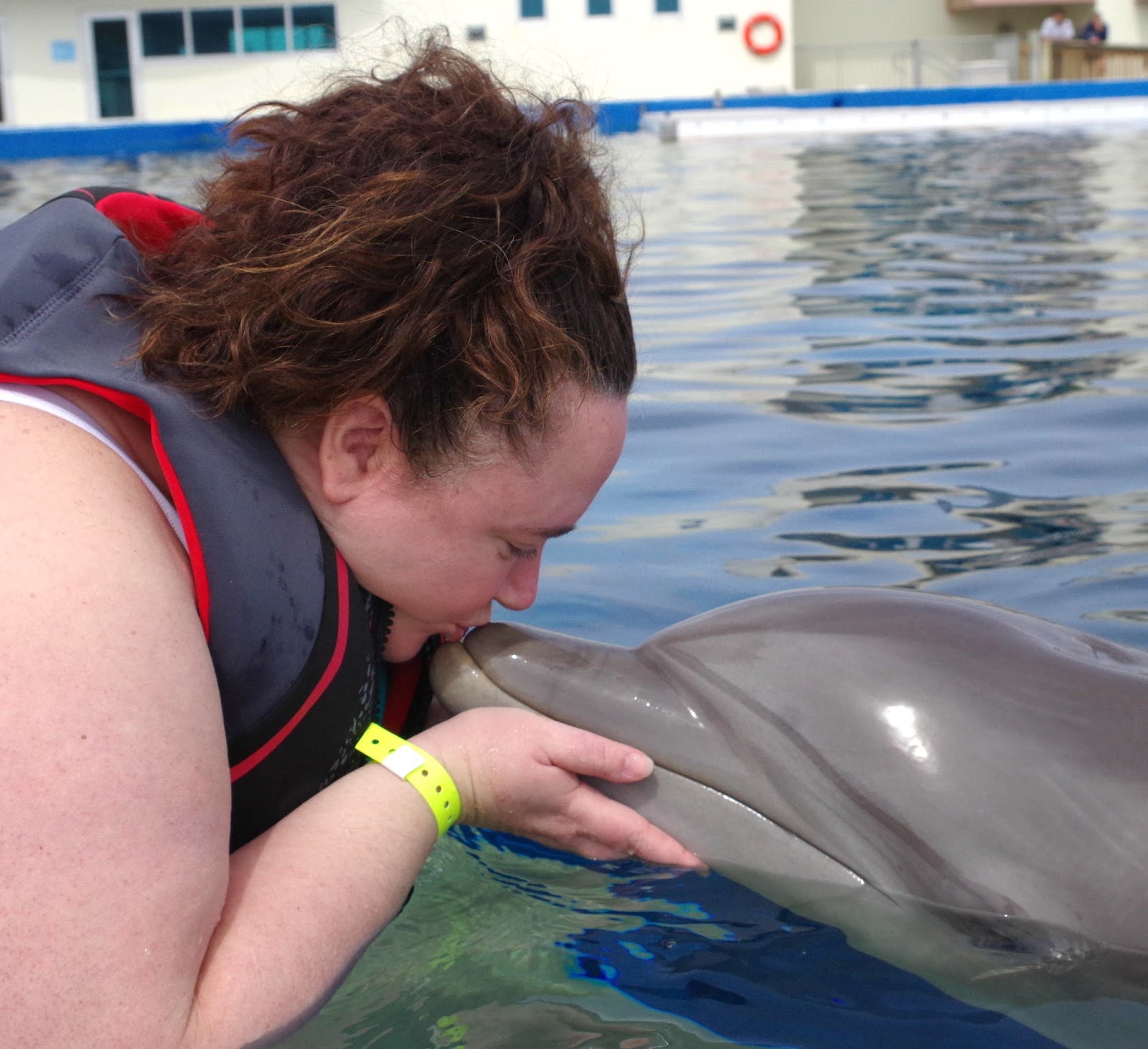 Then I was able to get in the water and meet Coquina and Toiko. They were amazing and beautiful girls! My trainers Kate and April were very helpful in working with me. I’m not a swimmer but when you’re in the water – there’s a ledge that you can walk out onto so you’re in the water – but you’re still standing and not having to rely on swimming. (I had a lifejacket too as you can see.)

I was provided the Dolphin Immersion experience which gave me nearly an hour in the water with the girls. This allowed me to get up close and personal with these girls. They were amazing and beautiful! The trainers then showed me some of their training techniques. And I got to kiss the girl!

Definitely an adventure that is NOT to be missed! 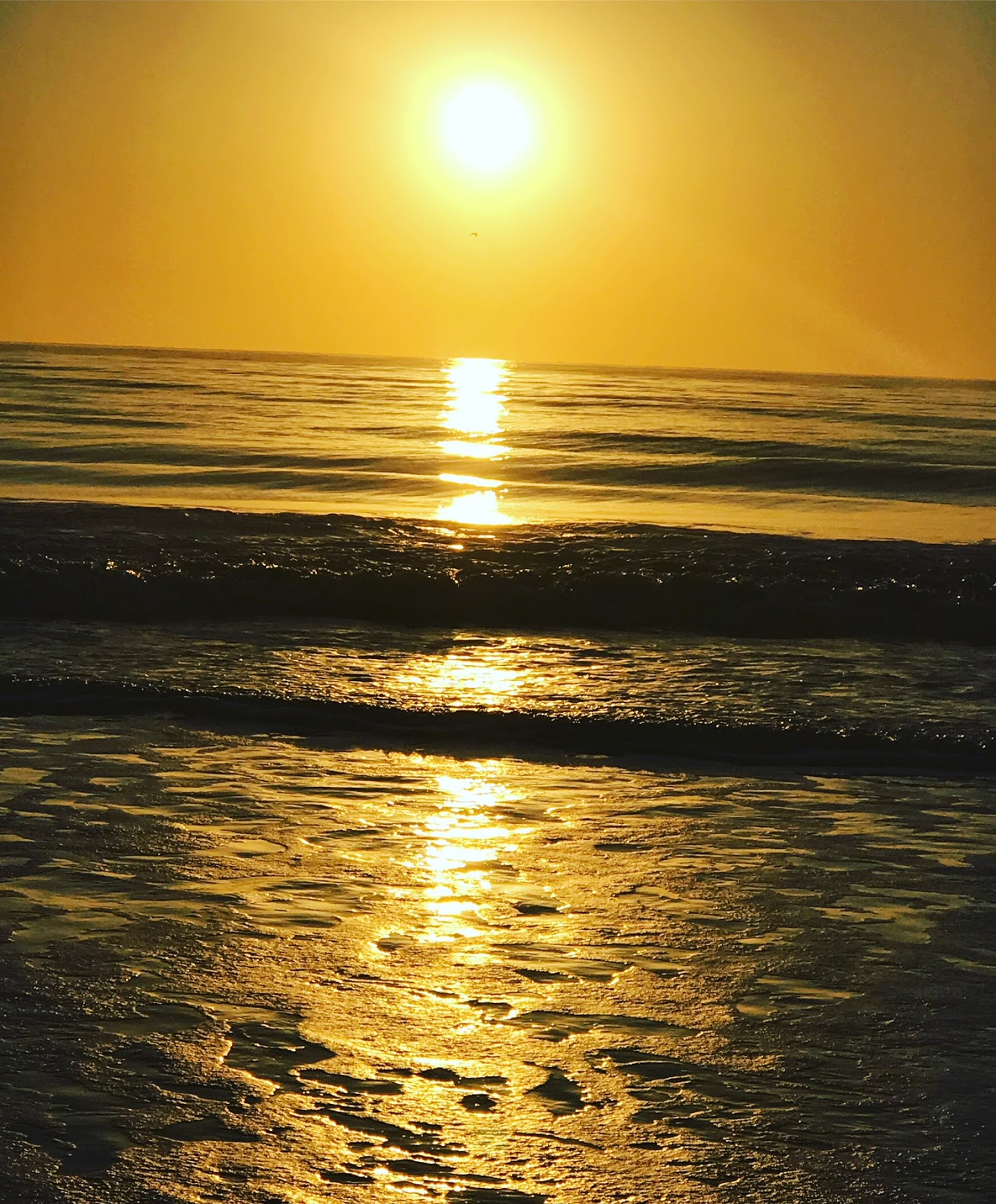 Sunday morning I woke up early and headed down to the beach to catch the sunrise. We stayed at One Ocean Resort on Atlantic Beach. It was a beautiful hotel with a lot of nice amenities. The beach was right outside the door! There’s also a really nice shopping and dining area right next to the resort so if we had wanted to just stay there with no car – we would have been fine and had plenty to do. 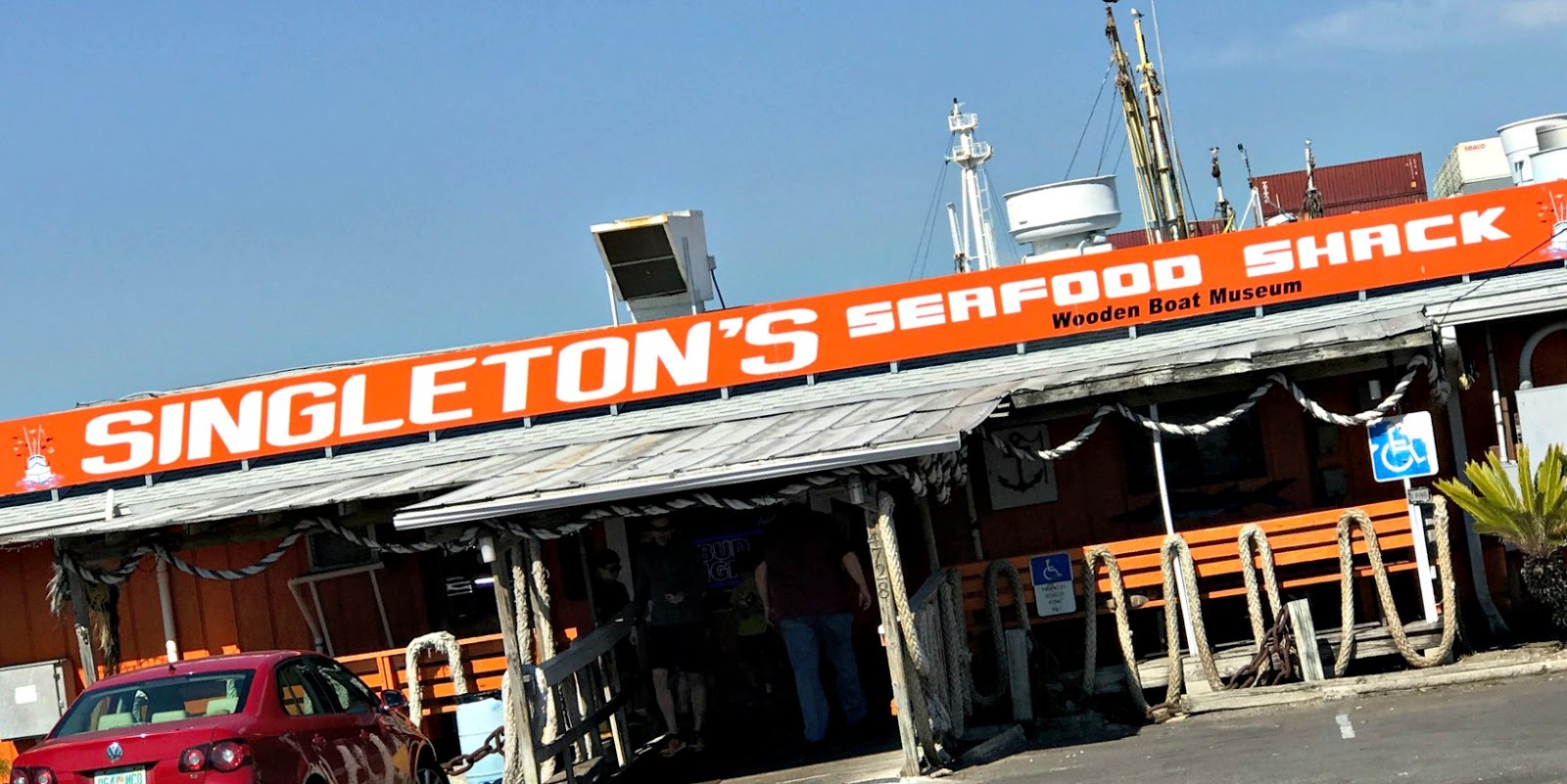 Okay – it’t not a big adventure – but you can’t think I’m going to not talk about food! Seafood shacks are all the rage in Jacksonville and I was excited to go to one! There was a nice fancy one near the resort – but I wanted to hit up a more local shack. Sunday we decided to drive up to Amelia Island and on the way we went to Singleton’s Seafood Shack. 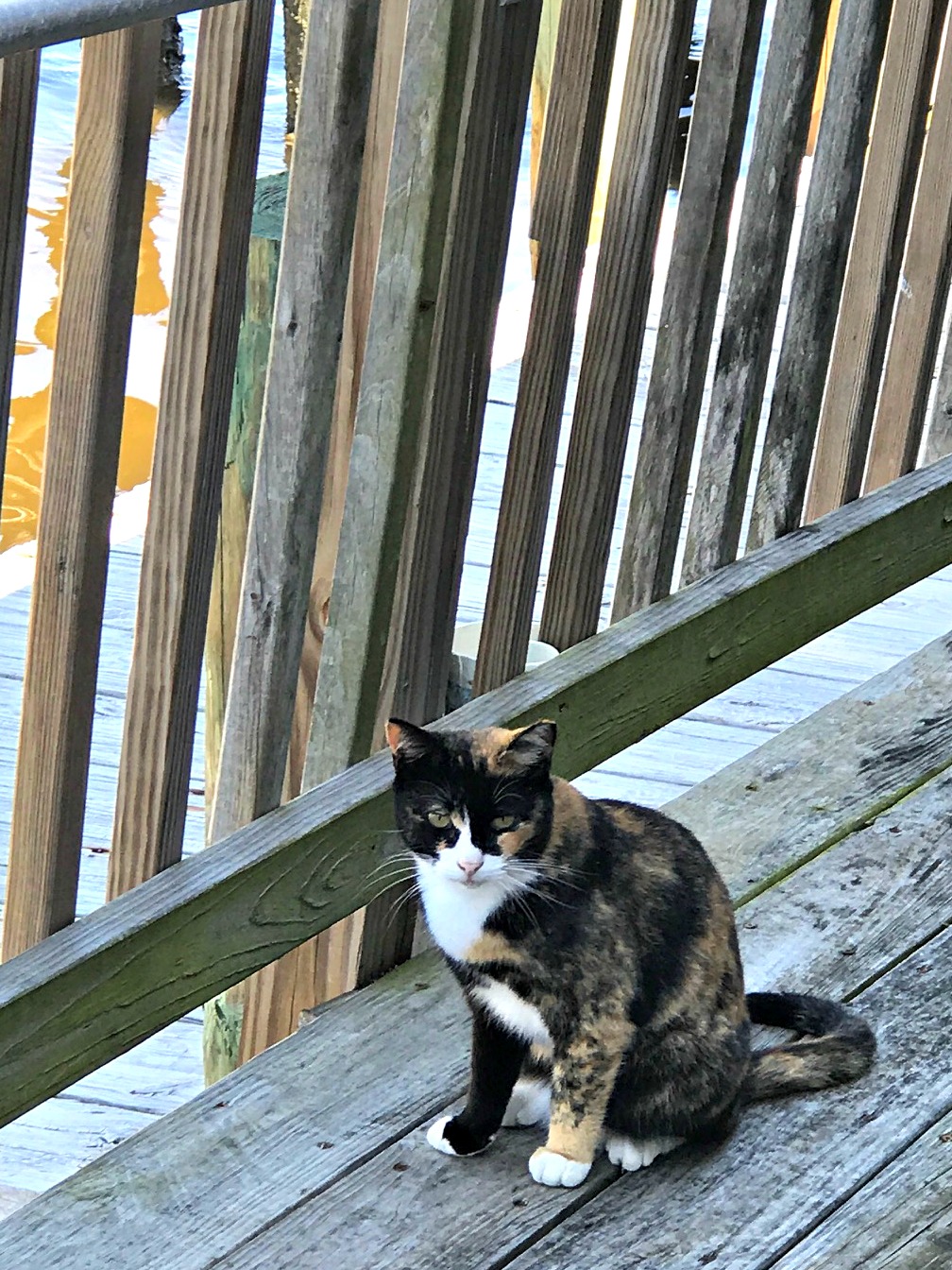 Where’s the animal adventure here? Well – they have kitties! There are quite a few kitties that call the Seafood Shack home. They’re all spayed and neutered and you can even donate to their care at Singleton’s. This little girl came out to see us while we had lunch on the water. 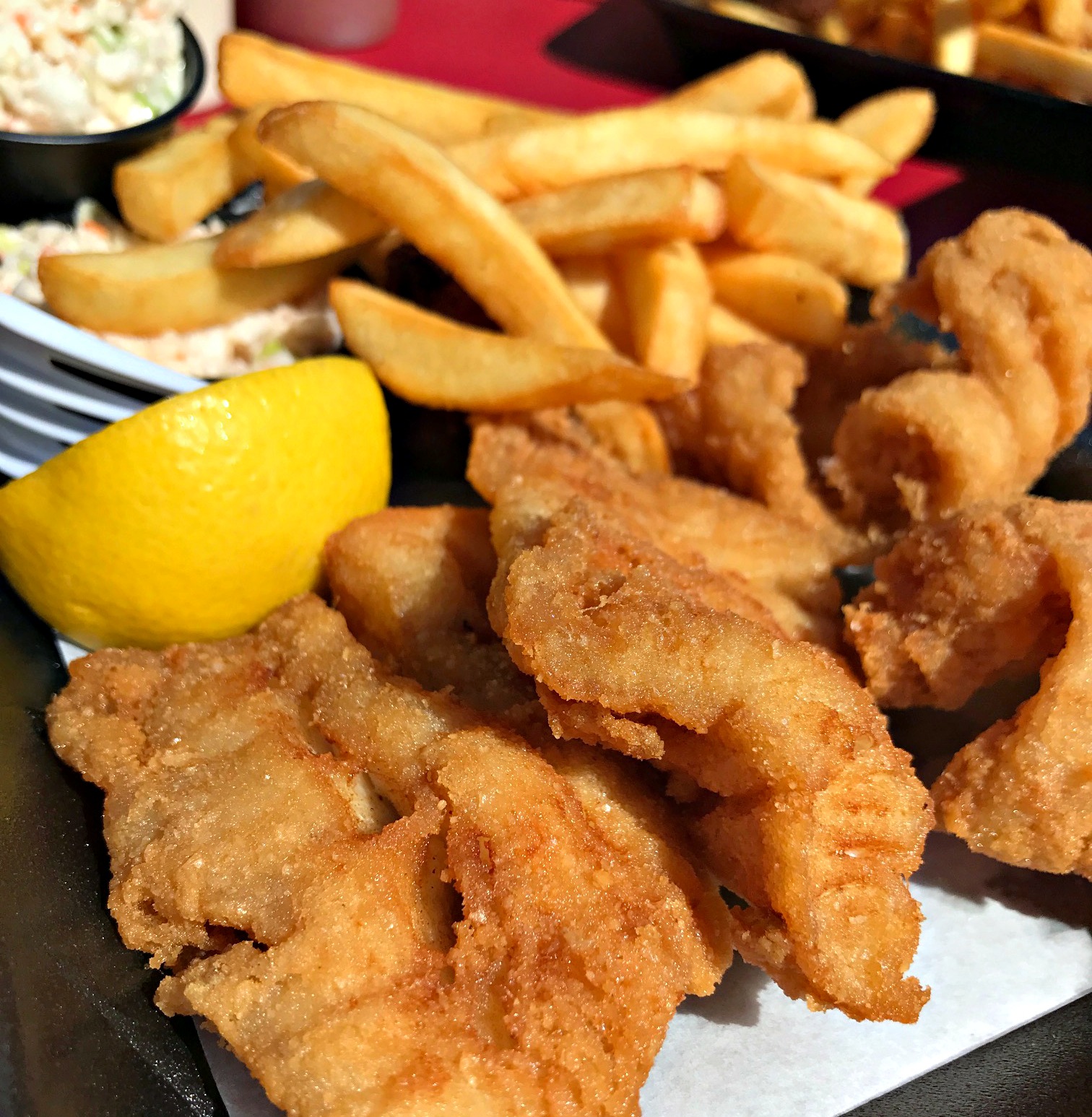 You can also try the fresh catch of the day or a plethora of other fish options. I had the fried Triggerfish basket and it was DELICIOUS! It’s a nice thick flaky white fish that hit the spot for a fresh lunch on the water. I’m also typically a tarter sauce fanatic – but this didn’t even need it! I dipped some in but mostly I just enjoyed it on its own!

We loved Singleton’s! I’ll have more in a separate food review coming soon! 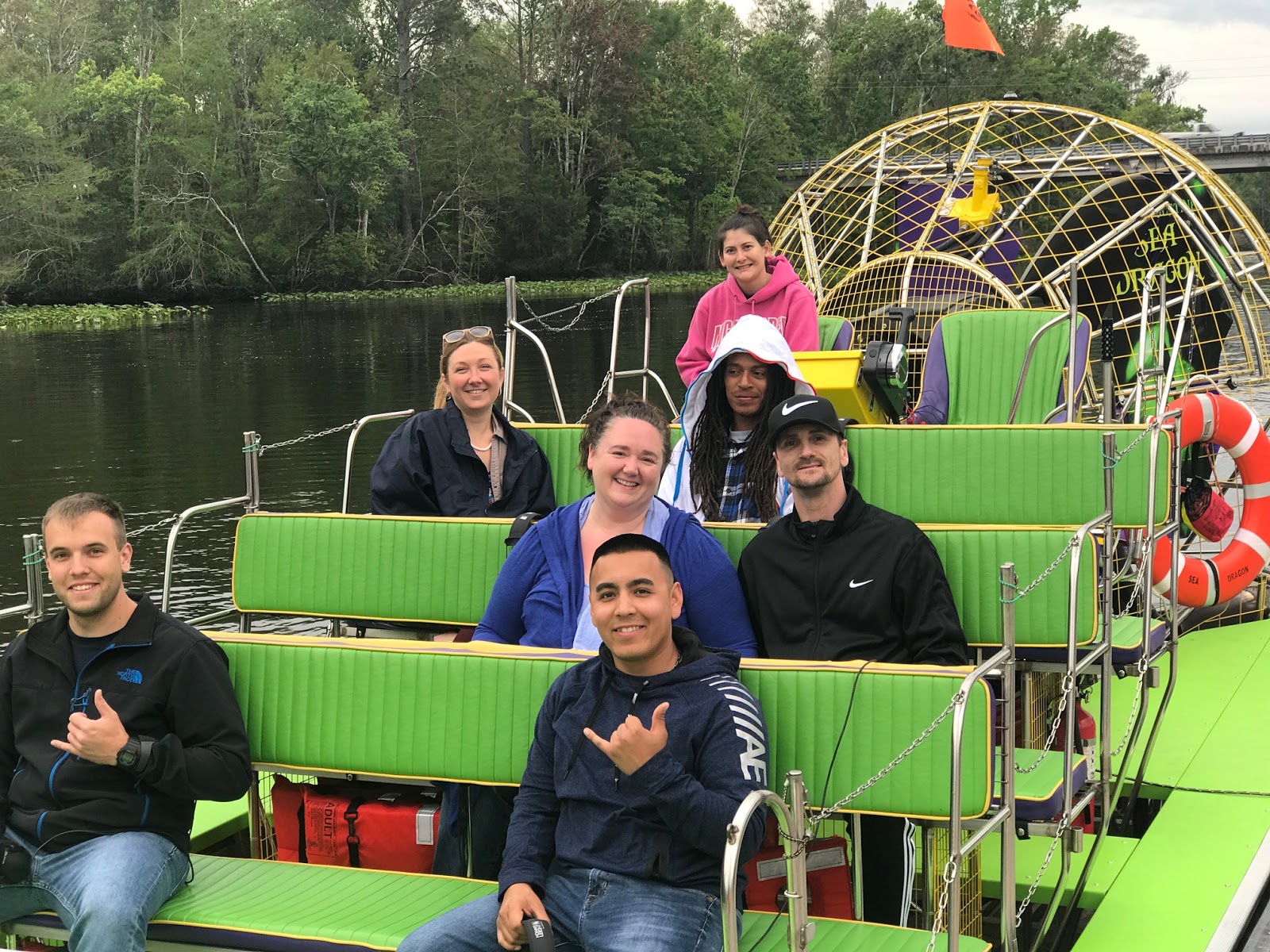 The last of our adventures was Sunday night and it was really for the hubby! He watches Swamp People all the time and loves fast boats. I wanted to take Larry on an airboat tour and found Sea Serpent Tours. This was on the inland side of the water about 45 minutes from Jacksonville in St. Augustine. 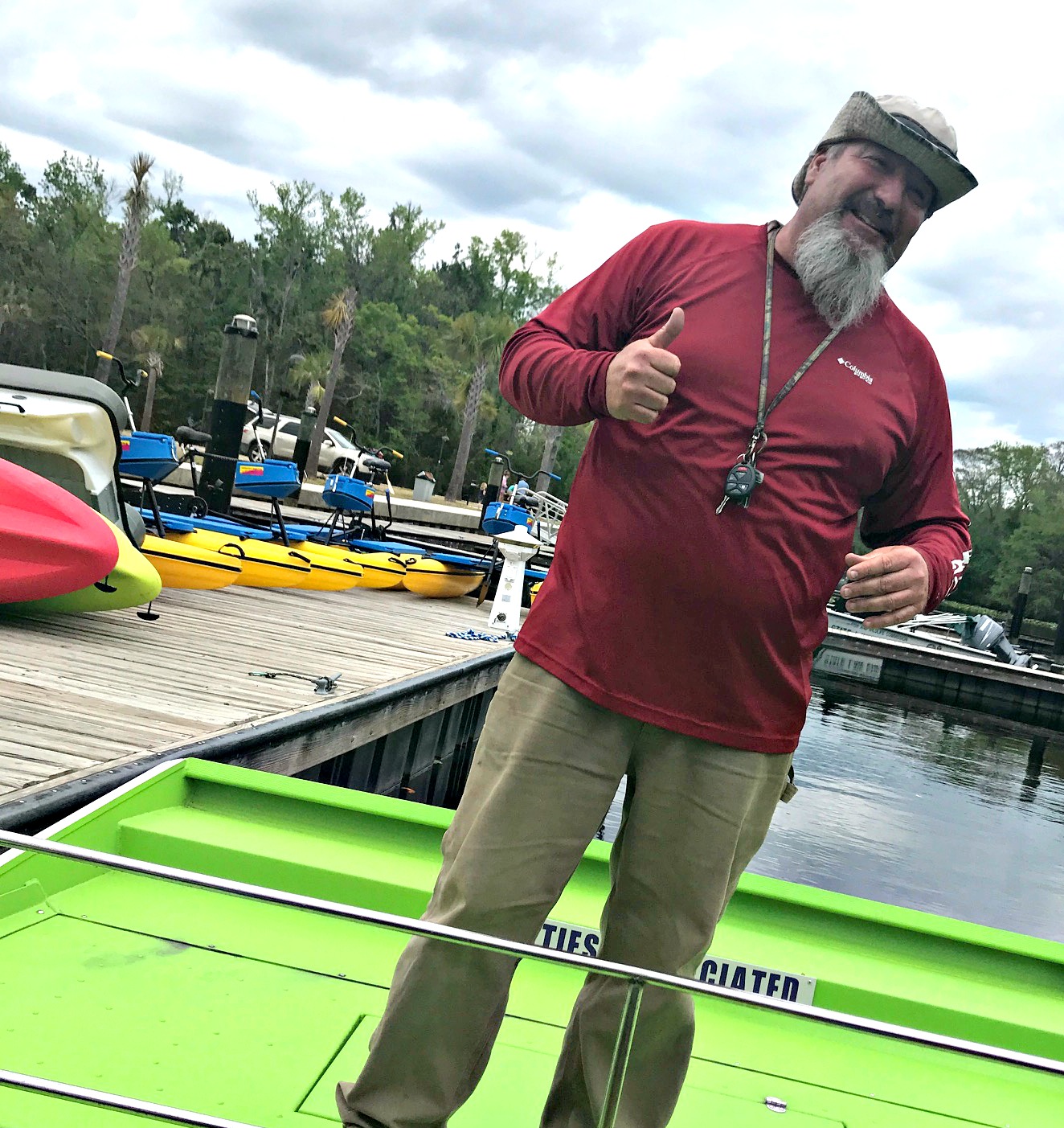 Captain Mike was great!!! He was super friendly and extremely knowledgeable. We also were worried we might not make it in time but Captain Mike stayed in touch with us and made sure to wait until we got there. The boat was really nice! Captain Mike also told us they also have hydrabikes and kayaks that use for fitness classes. 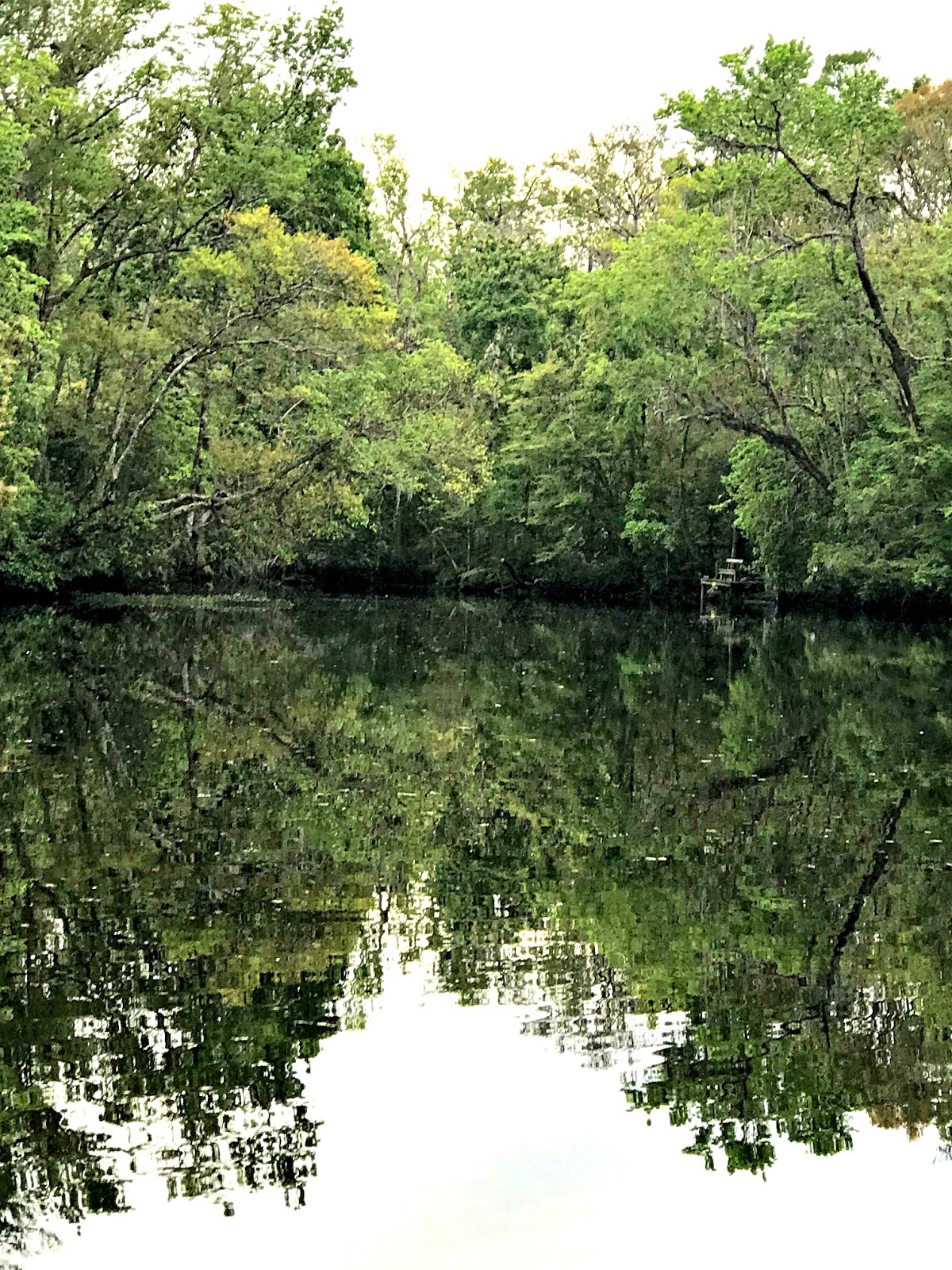 Captain Mike whipped us around pretty fast on the airboat with some great tunes for a bit – then took us into some more quiet pathways of the river for a leisurely sunset ride. The water was like glass and the reflections were so pretty. It was a beautiful way to end our vacation. 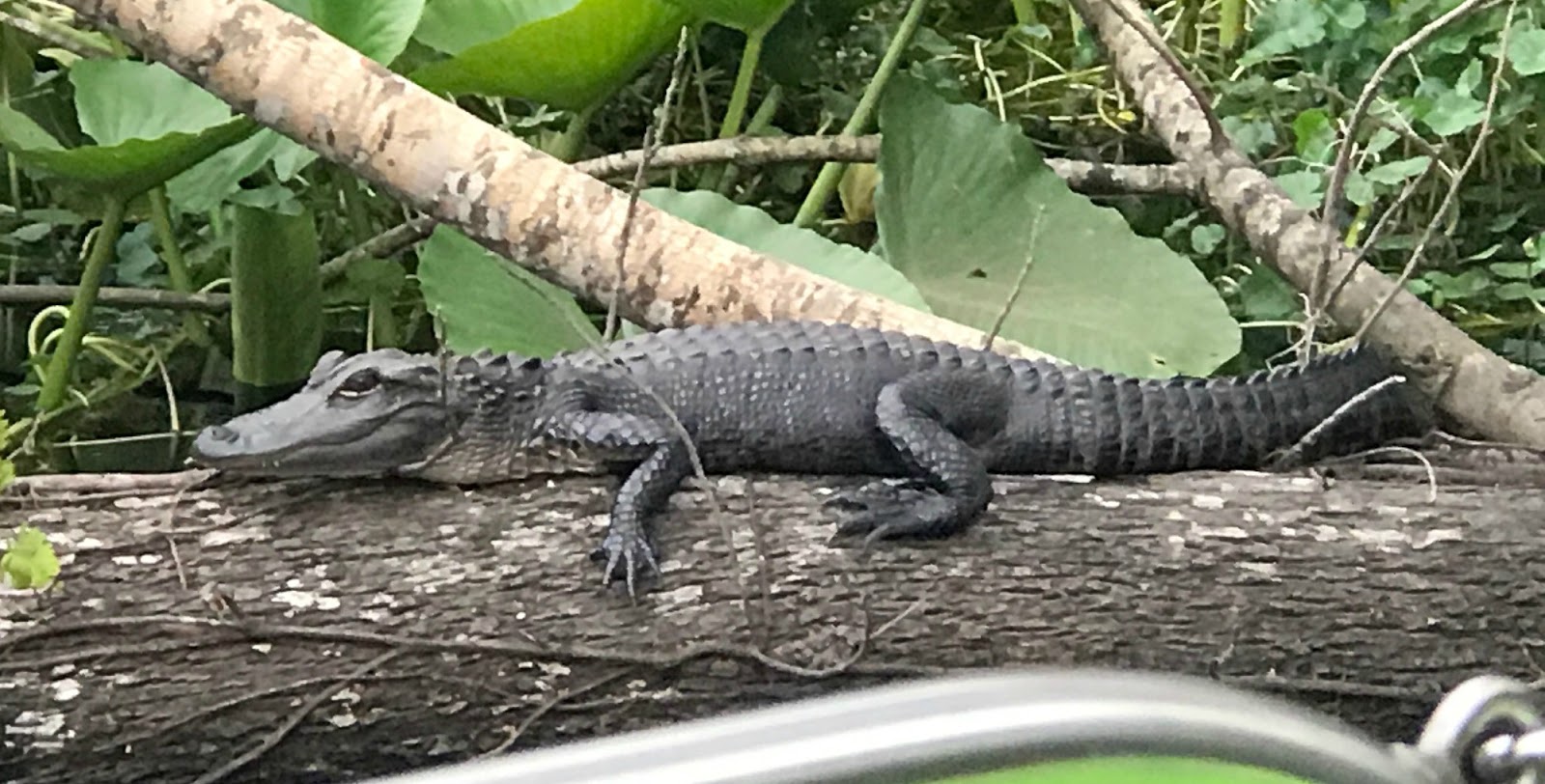 Captain Mike also knew right where to look for the local wildlife. He told us folklore stories, information about the heritage of the area and lots of info on the animals that live in these waters. We got to see a few baby gators resting on logs. These little guys were about 3-4 feet long and were just babies! We could get pretty close – but we definitely were respectful of them and their space.
There were also bigger gators around – but at dusk – they’re pretty much in for the night and you won’t see them. All in all – I would HIGHLY recommend the Sea Serpent Tours – Captain Mike was great and you can’t help but enjoy the ride! 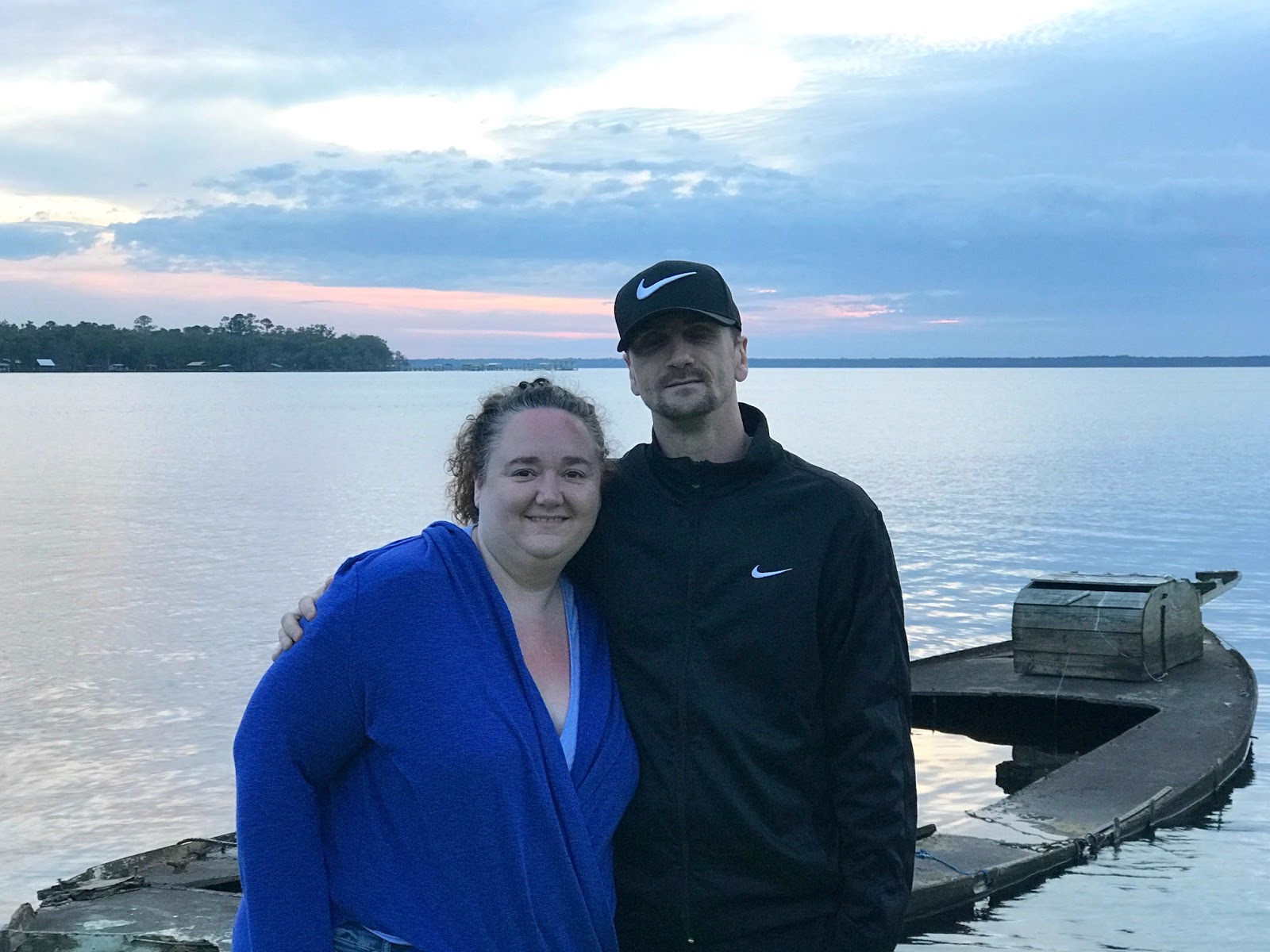 We were on the Sunset Tour and Captain Mike has a great spot in the river that he pulls up to for sunset photos. It’s a great photo to remember our long weekend in Jacksonville!

I would definitely recommend all of our animal adventures as well as Jacksonville. It wasn’t quite as warm as we had hoped – but we enjoyed it nonetheless. If you love animals and the beach – Jacksonville is a destination to check out!