Recently – I’ve been able to go on fun blogging road trips – and then come back and share all the fun we had on them! Last week, Larry & I made a 9+ hour trek to…BRANSON, MISSOURI! 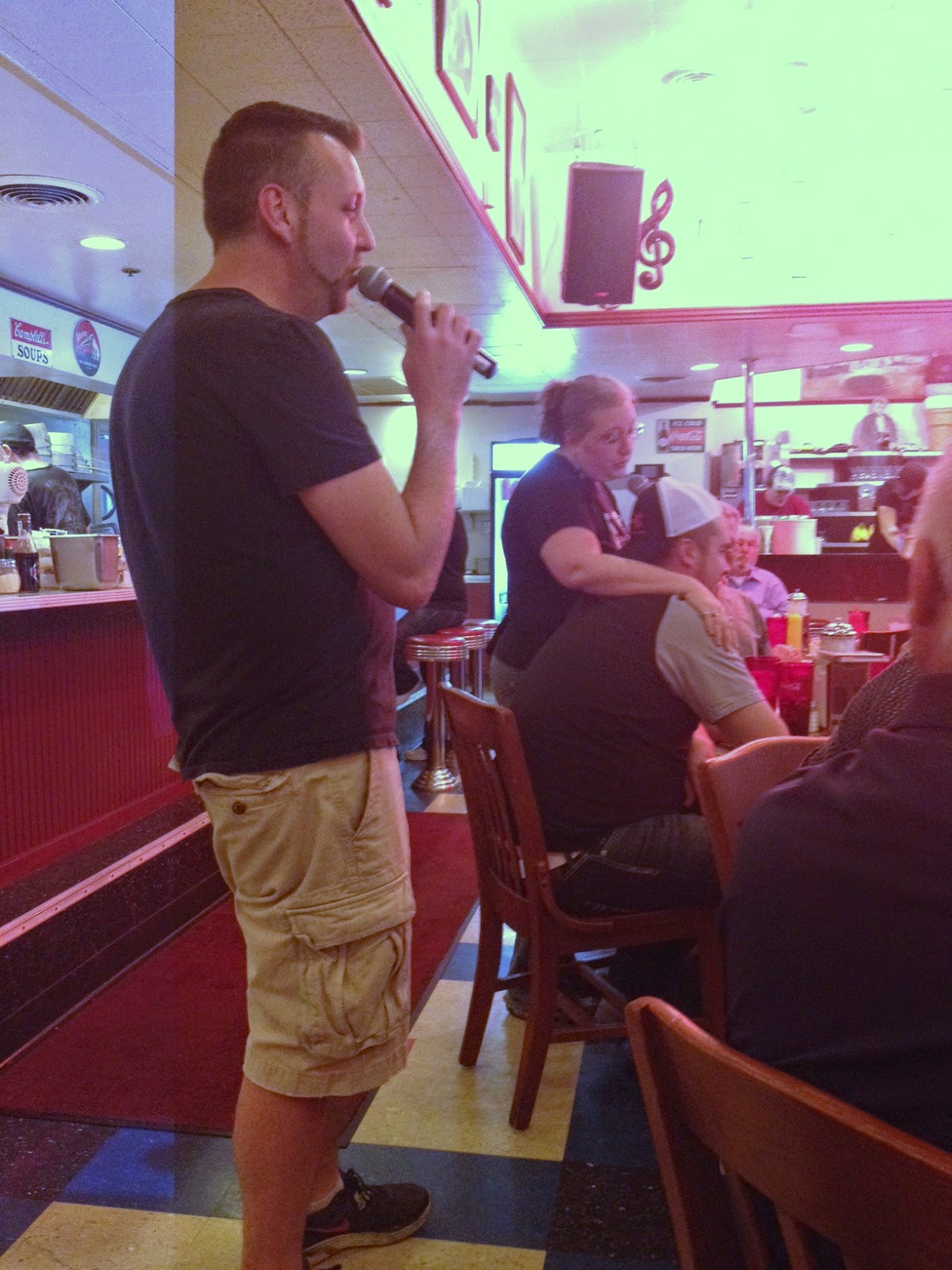 First up as we pulled into town, we headed to Mel’s Hard Luck Diner for dinner. Mel’s is pretty unique in that you get singing staff! So while we were eating dinner – we were serenaded by the staff as we noshed on some dinner! 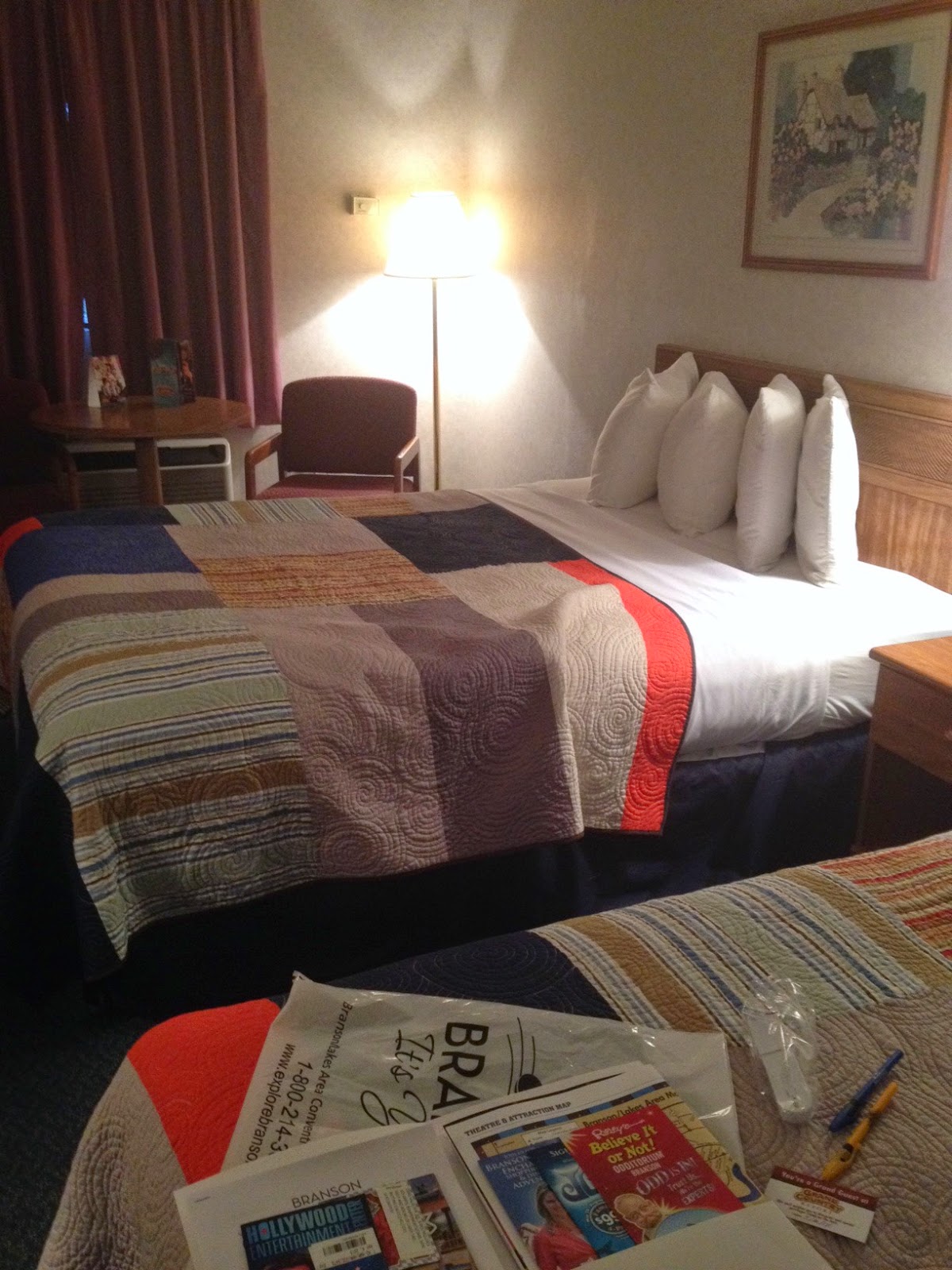 After dinner we checked into our room at the Grand Country Inn. The hotel was a pretty good spot – it has a buffet, water park, indoor putt putt course and a show theater. It’s a great place if you have kids – with all the amenities – it’s like a resort in itself. There aren’t a lot of extras – but if you’re looking for a good deal – this is a good spot.

That night we went to Six – an amazingly entertaining show. These six brothers were once on the Donnie & Marie show and now they’re still singing together. Their “schtick” is that there are no instruments – other than their own voices. The show was really great and yes – that’s me on stage with them! They pulled a couple of us up for their rendition of “Macho Man”. It was a blast!! 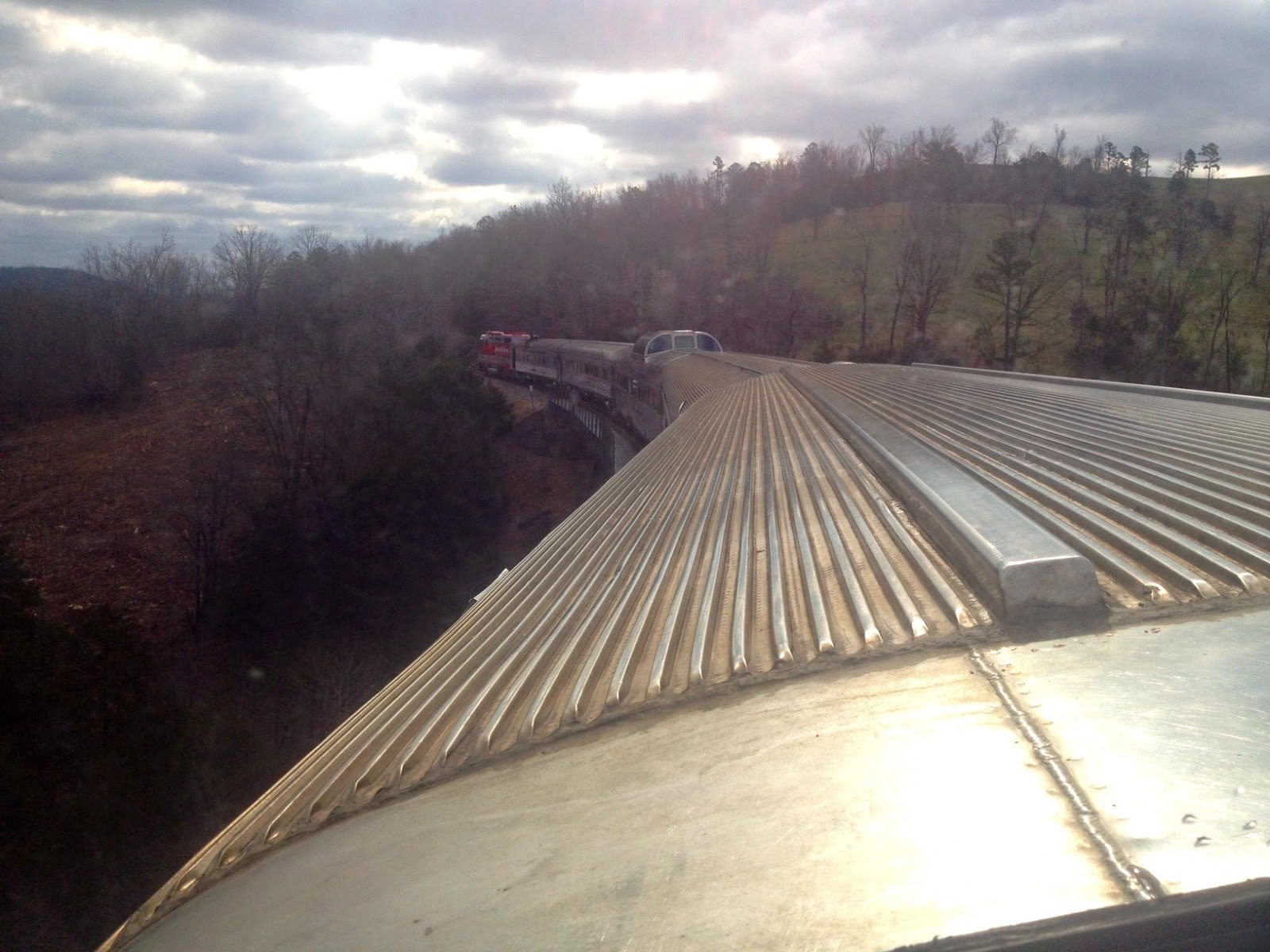 Friday we hopped aboard the Branson Scenic Railway for a two-hour train ride around the back side of Branson into Arkansas. It was a peaceful ride where we learned about the history behind Branson and took in some beautiful views. 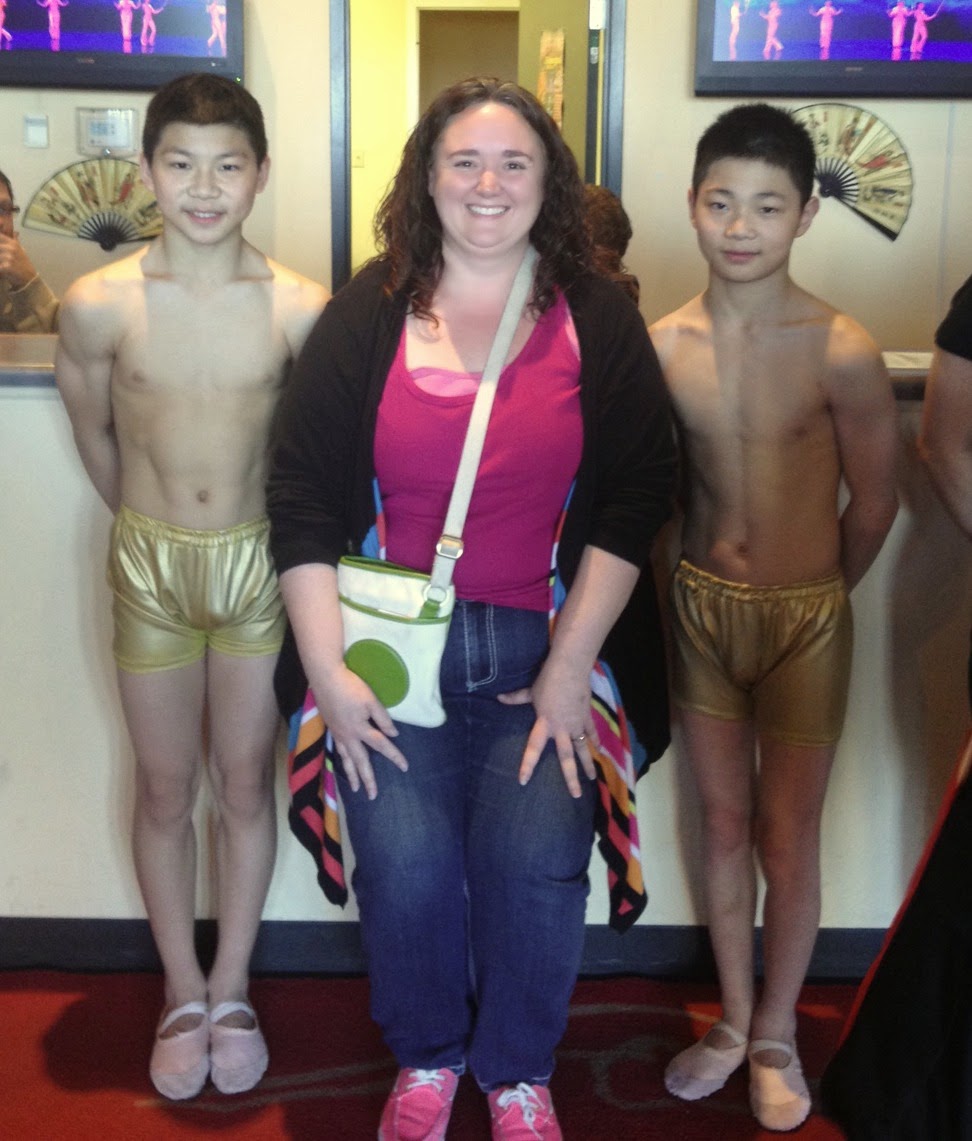 Now this picture has gotten quite a bit of chatter from my Facebook page – but I assure you – no funny business here. We saw the amazing New Shanghai Circus and these boys were so amazing I had to get a photo with them. The whole crew was astounding – but these two – at only 11 & 12 – were the show stoppers. Contortionists and balancers – their talent is amazing!

We had never been to the Hollywood Wax Museum but made a stop there – and I have to say – it was a lot of fun. We had a great time posing with some movie favorites. Some of the wax figures were better than other – Drew Barrymore from Charlie’s Angels was ridiculously amazing. We had a lot of fun with it – I don’t know that I would go again in another city – but if you haven’t been – it’s a good time. 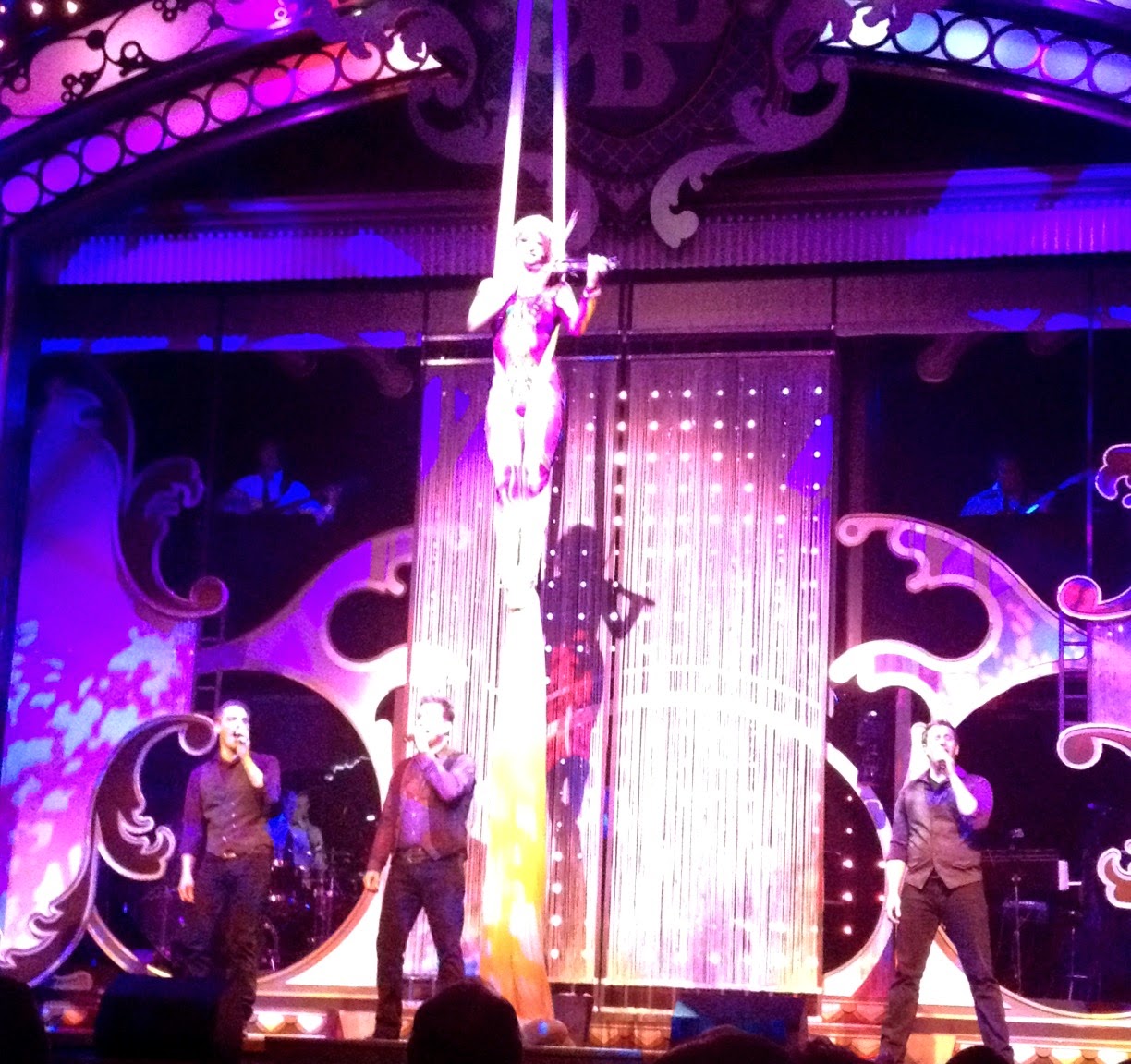 That night was the Showboat Branson Belle riverboat dinner cruise & show. This was interesting and a bit of a mixed bag. There was entertainment of a comedian/magician Christopher James (who was – a little surprisingly – REALLY funny) along with the Showmen and the violin playing/aerial artist/singer. It was a bit over the top at times (she was doing the splits while playing Van Halen on her violin in purple spandex) – but the Showmen are talented singers and the food was pretty good too! The cruise was peaceful but a bit too cold for us to really enjoy. 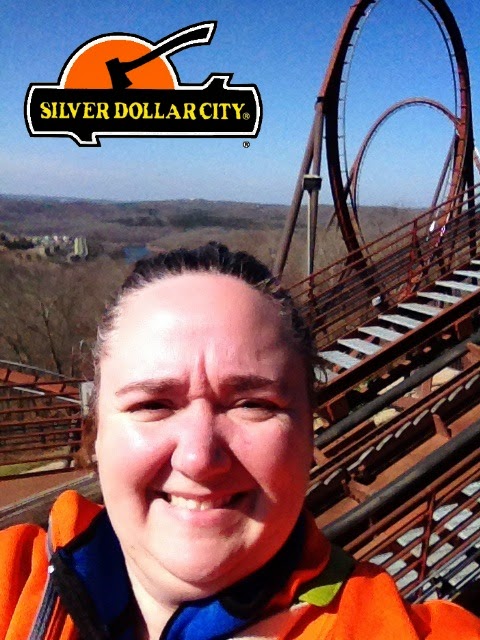 Lastly for us, we headed to Silver Dollar City – it’s the amusement park with the old west theme running throughout. They really take it seriously! I was proud of myself that I lived through a roller coaster – I started with tears but just kept my eyes closed and did ok. 🙂 We had to leave early and missed the tour of the White Water Water Park – but they have a new slide called the Kapau Plummet. Makes me a little nauseous just thinking about it – but if you like water slides and/or coasters – you should check it out. It opens this summer!

This is just a quick rundown of Branson and what we did – I’ll have more info and detail in weeks to come. But as you think about your summer vacation plans – if you’re looking for a family-friendly vacation, Christian-focused destination – then consider Branson, MO.