The hubby and I decided we needed a little weekend away – put that together with a Groupon and we had a mini-vacation! We took a couple days off work and headed to Elk Creek Lodge & Winery in Owenton, KY which is about 90 minutes south of Cincinnati and equidistant to Louisville and Lexington. 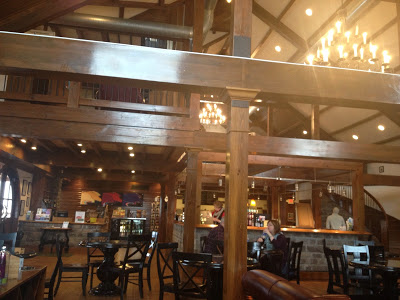 Part of our stay also offered a cheese tray in their Winery. It is really pretty and all full of wood and leather. There’s also a small art gallery upstairs. 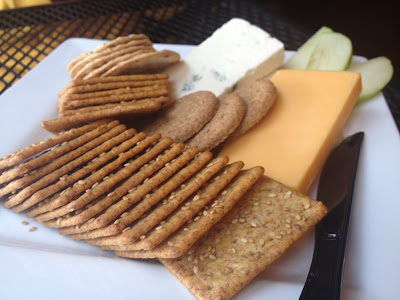 Mmmm cheese! None of it was too “fancy” and we polished off everything except for the blue cheese – oye – I just cannot deal with that stuff – tastes like feet! 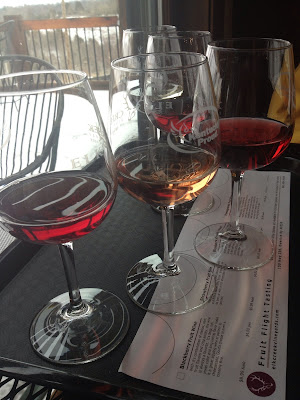 I went for a flight of their fruit wines – the blueberry was my favorite. 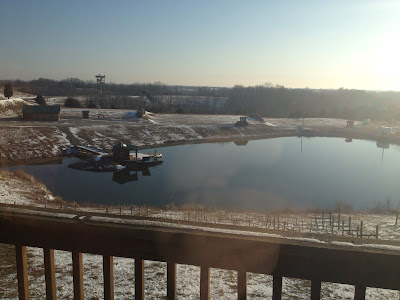 This was the view from our room – I’m sure it’s really beautiful in the summer. There are a few different buildings on the properties for folks to stay in. We were in the actual Lodge which has 6 rooms as well as a few common areas. It’s really nice and there’s a full kitchen which you’re welcome to use which I thought was a nice feature. 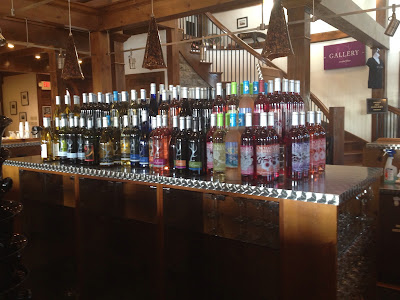 The wines on the left are all the more white/red wines and the ones on the right were all their fruit varieties. Most “real” wine people aren’t fans of the fruit ones – but I don’t really like wine – so the fruit ones are right up my alley.

The trip also included free continental breakfast in the morning – there were all sorts of rolls, muffins, cereal, juices and waffles! I love me some waffles. While I was enjoying my waffle, we were chatting with them about historical sites in the area and they recommended we head to Frankfurt (maybe 20 min away) and check out the Buffalo Trace Distillery. 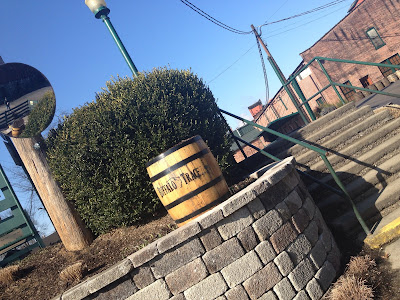 The distillery sits on a beautiful property and the tours are free! We were down with that! The tours are free at Buffalo Trace (they are not on the official Bourbon Trail anymore) and they also offer a ghost tour which we will definitely be back for! 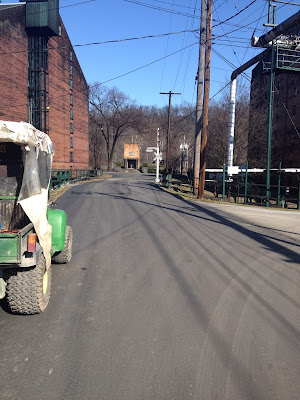 This right here is their 6 millionth barrel of bourbon! They keep the barrel in there until the 7 millionth is done. It’s pretty cool that when that happens they will donate this barrel to charity and then they’ll do something special with it to generate some money. 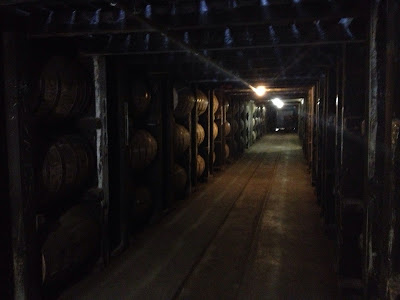 They have quite a few buildings on the site and it’s a science as to what barrels go where and what comes out of them! Depending on where the barrel is (1st or 5th floor, middle or outside) – the taste changes. Some of the barrels have been here 23 years! 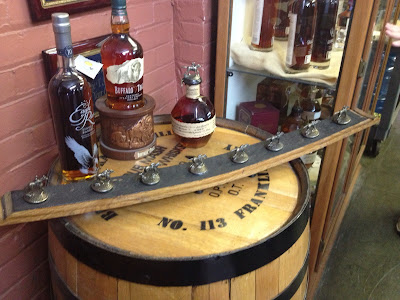 My favorite fact that I learned was about their Blanton’s Bourbon (named after the pioneer of Buffalo Trace). Blanton’s is on the right in the photo above. The stoppers that go in the bottles actually have 8 versions – and when put in order – look like a horse taking off in a race. 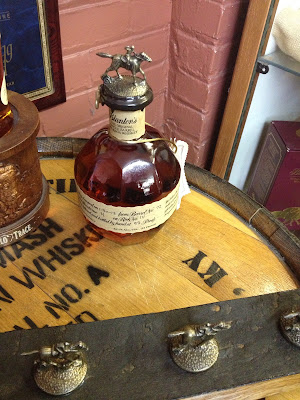 They go from the start position all the way through galloping. Each stopper also has a letter on it and they spell out Blanton’s. Unless you’ve been on the tour – you probably would never even notice that! I love stuff like that. (They even gave us one stopper each to take home!) 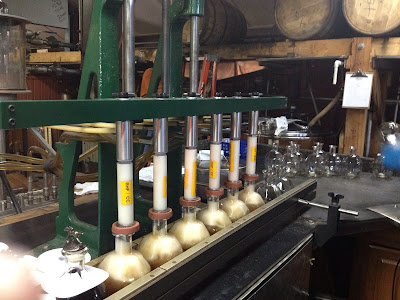 And now my confession – if I could have any job where salary would not be a factor – I would probably work in a factory. I freakin LOVE watching products get made/packaged. I think I watched too much Laverne & Shirley as a kid. 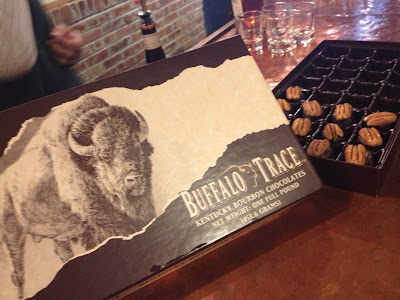 After the tour we headed to the “bar” and got ready to try bourbon (and chocolate!). I have to say – these chocolates were amazing! They had bourbon in them and were so creamy and delicious! We brought some home for Larry’s mom as a thank-you for watching the dogs. 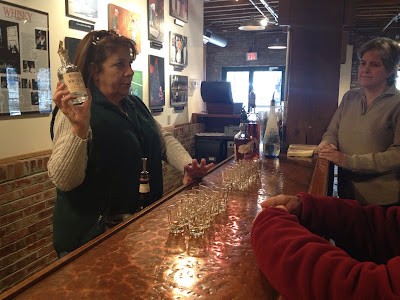 Here’s an interesting fact – Buffalo Trace was one of only 5 distilleries open during prohibition. They were allowed to sell whiskey for “medicinal purposes”. People would get their whole family diagnosed with whatever ailed them so they could get more!

I did try some bourbon – and I did not like it! It’s way too strong for me – I just am not much of a drinker anyway – especially this. But the tour was incredibly fun – especially since it was free! 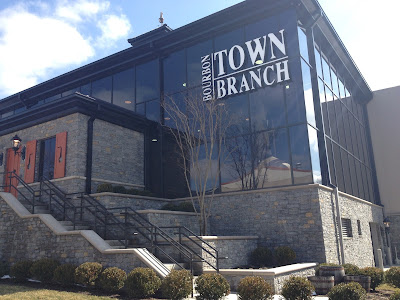 Next up we headed to Lexington to check out Town Branch. This distillery is on the bourbon tour but they’re also a brewery. The bourbon is really the side business for them – and this is also the newest spot on the tour. 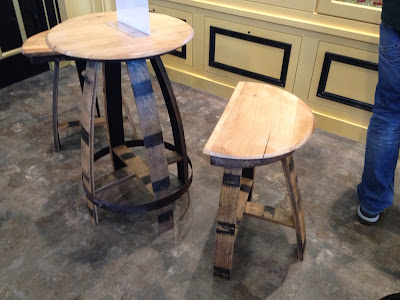 Larry was really captivated by these – I’m guessing there will be a barrel purchase in our future. 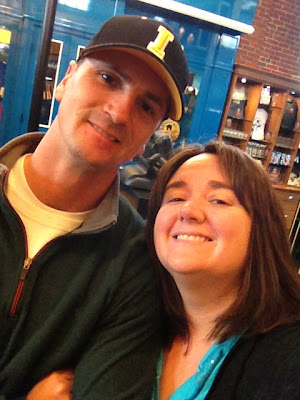 Here we are – getting ready for the tour! 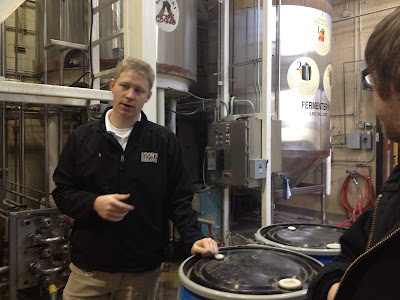 Our guide on this tour was great – while we enjoyed the other tour more – this guy was really fun and knowledgeable as well. We found out that the brains behind the operation has experience working with animal nutrition and he has it set up so the used up yeast is then used for animal feed. Pretty cool to reuse as much as they can! 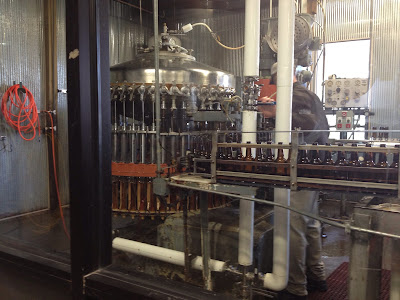 And more of my factory obsession! Town Branch/AllTech makes the Kentucky Bourbon Barrel Ale. It’s their Kentucky Ale that’s then aged in a bourbon barrel for 6 weeks. It started as a treat for the employees of AllTech but as friends & family found out it grew and grew and grew and they finally started bottling the beer.
They’re now making their own bourbon as well but since it has to age for a while – they still use barrels from the other distilleries. This beer can be pretty strong and it’s a lot pricier – but it’s a nice treat. 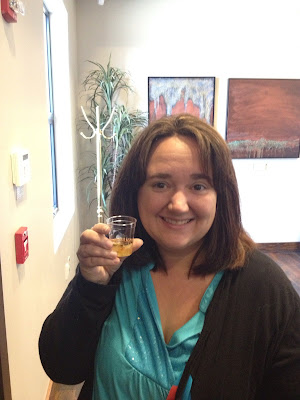 Here’s me with a taste of their bourbon…that smile quickly disappeared. That’s just horrible stuff! 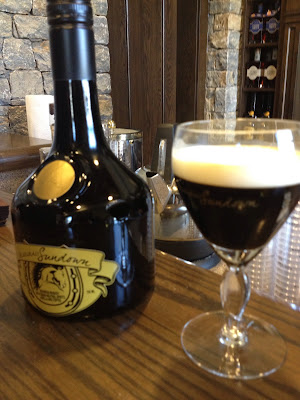 This on the other hand – is NOT HORRIBLE!
This is Bluegrass Sundown – it’s a combination of coffee, bourbon, sugar and vanilla cooked down and bottled. You pour this in a glass, add hot water and top it off with heavy cream.
Holy hell it was AWESOME! I don’t like coffee or bourbon – but this was the best drink ever! I drank two little cups of it! I asked if I could drink this before work and tour guide said he probably wouldn’t suggest it. 🙁
So that was our first stop on the Bourbon Trail and we’ll definitely be back to visit more places.
Previous Post: « Review: The Best Pizza in Iowa
Next Post: Recipe: Spinach & Ricotta Shells »