Subscribe
One of the largest festivals of the year has started in Cincinnati – will you be one of the nearly 200,000 people to attend?

That’s right – it’s time for the Ohio Renaissance Festival! The festival runs through October 20 in Harveysburg (near Waynesville). It’s just north of Cincinnati up either 75 or 71. You can buy discounted tickets online and kids under 5 are free! 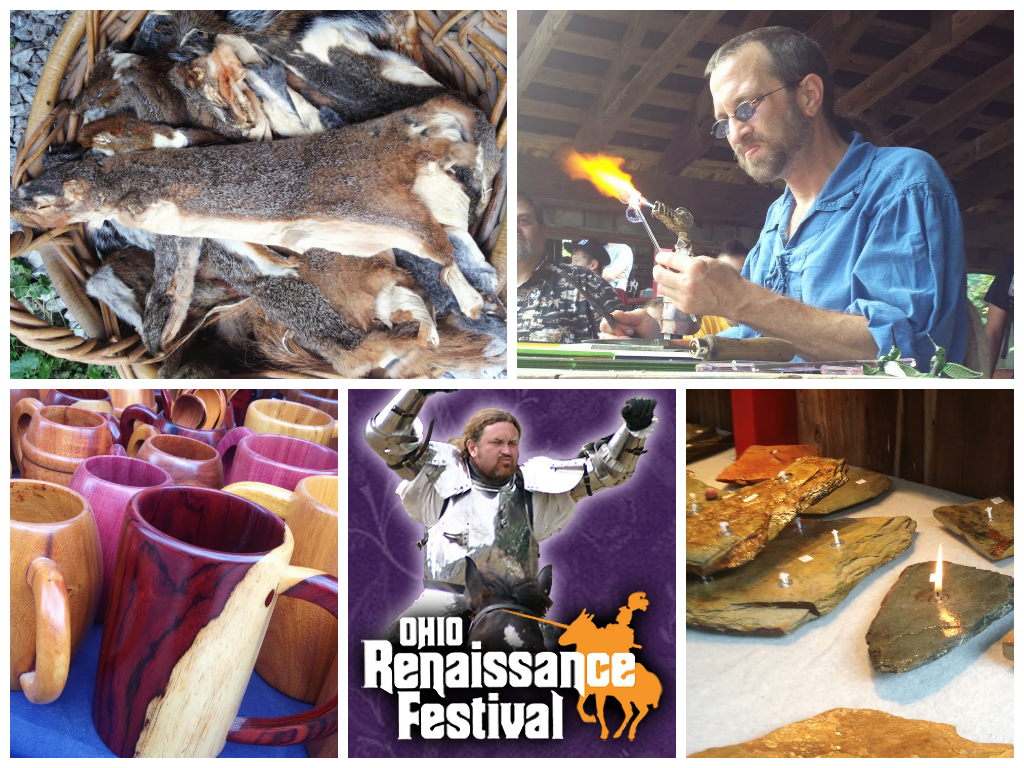 There is so much to do at the Renaissance Festival – they have a ton of vendors selling arts and crafts of all kinds. Yes squirrel pelts can be found there (yikes). I liked that they have some artisan crafts such as the glass blowing and jewelry making – it’s keeping older traditions alive. The wood mugs are all one piece with no seams – pretty cool! 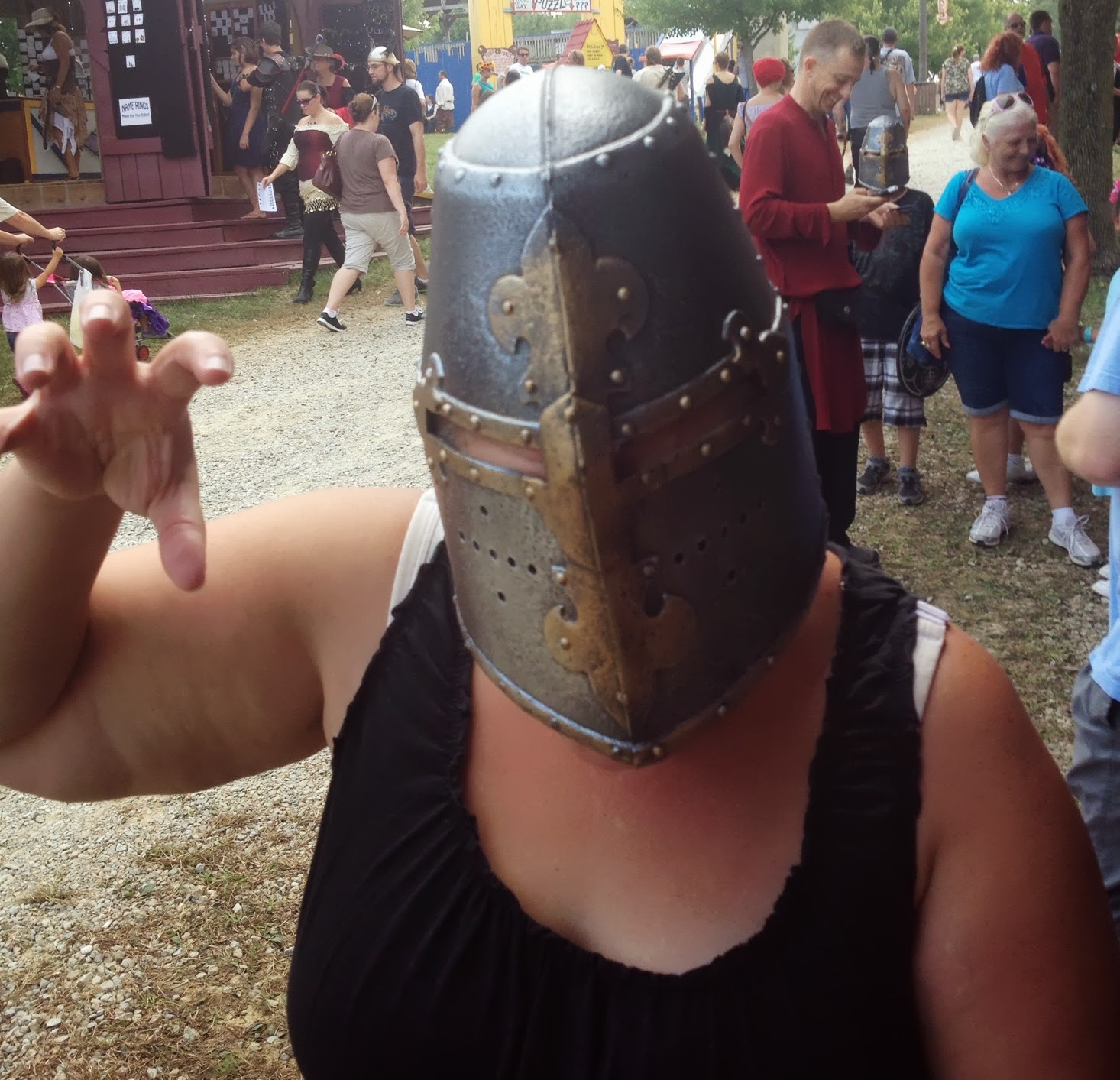 I’m not saying that’s me. I’m also not saying that I have no idea why I made a snarly hand – not really what you typically see from a knight. That’s why – it’s not me. No. Not me. 🙂 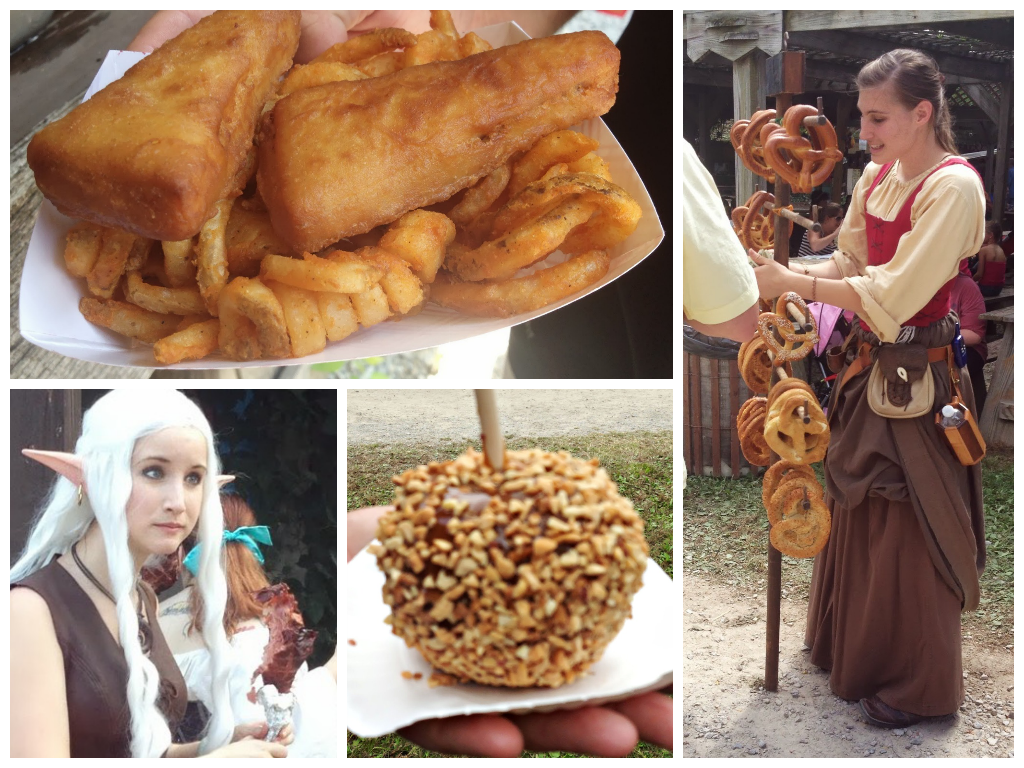 There’s also a TON of food. They go through 37,000 pounds of turkey legs ($7) every summer (bottom left). That’s a lotta bird! Handmade caramel apples with caramel so thick that it takes 5 minutes to get to the apple are just $3! There was also pretzels, roasted corn, Scotch eggs and more! That fish was pretty good!

Chris Cavender is an executive chef the rest of the year for a nearby country club – but for 16 years he’s been here at the Ren Fest! He prides himself on sourcing local ingredients for the festival such as:

They also sell more cider beer during this festival than the rest of the state does all year. Um yeah. I had a cup and it’s some good stuff (Woodchuck).

Volunteer groups run the most of the food booths and earn money for their charity along the way. We bought some soda from the Waynesville basketball teams! 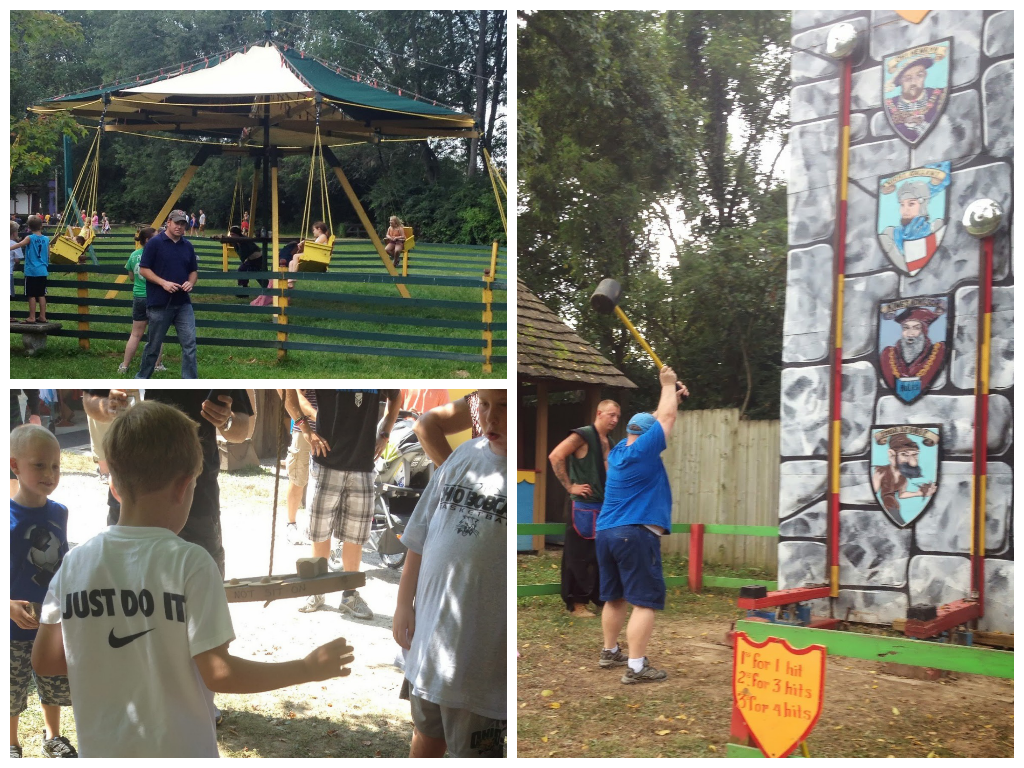 They also have a lot of games for kids. I think the coolest things is that these are all human powered games! It’s great to see kids getting out and doing rather than sitting and pouting on their video games. Larry liked the game on the lower left the most – it’s a platform hanging from a tree with big wooden dice. You roll the dice and whatever shows up is what you have to get out of the treasure chest and try and balance on the platform. First one to tip the platform loses! He now wants to put one in the basement. #ohLord 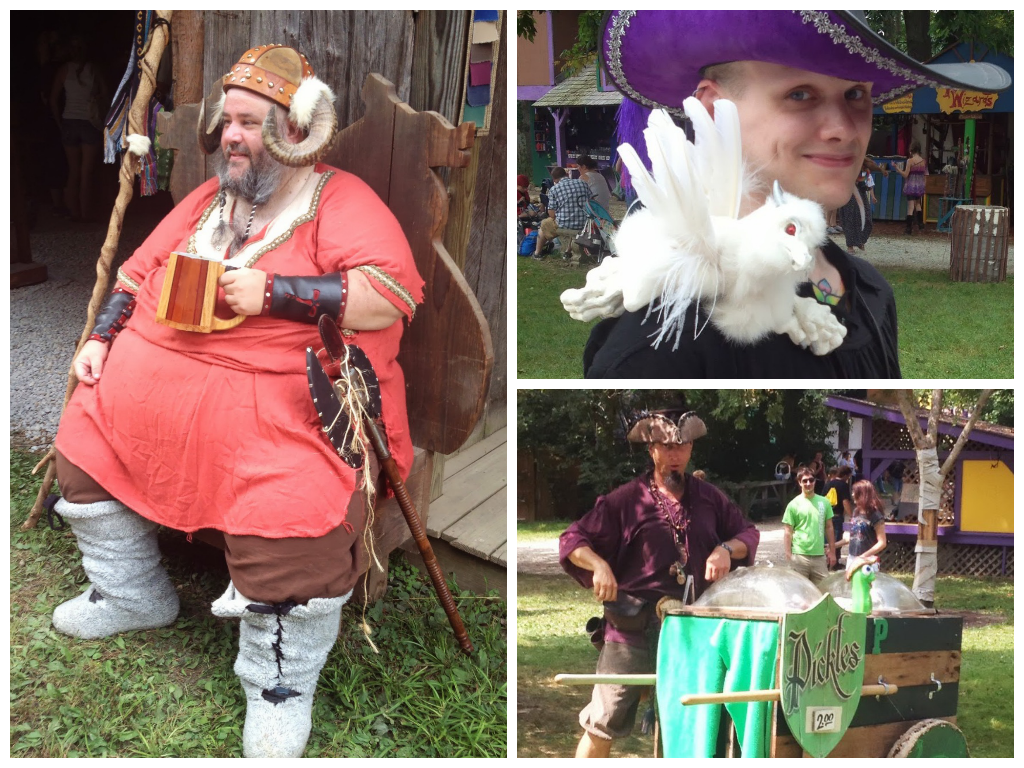 There are also some characters at the Festival! The folks that dress up REALLY get into it! The pickle guy (lower right) REALLY gets into it. He’s quite funny. 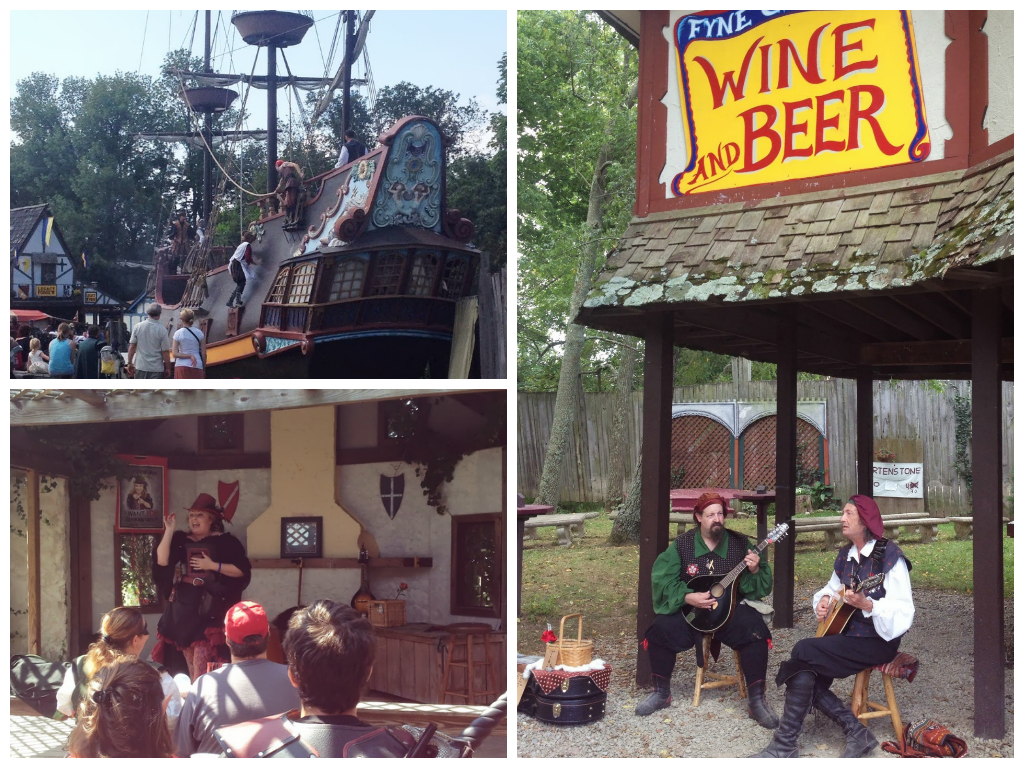 There is also a ton of entertainment – everywhere you turn there are musicians, comedians, plays, puppet shows, magic shows and everything else you can think of. 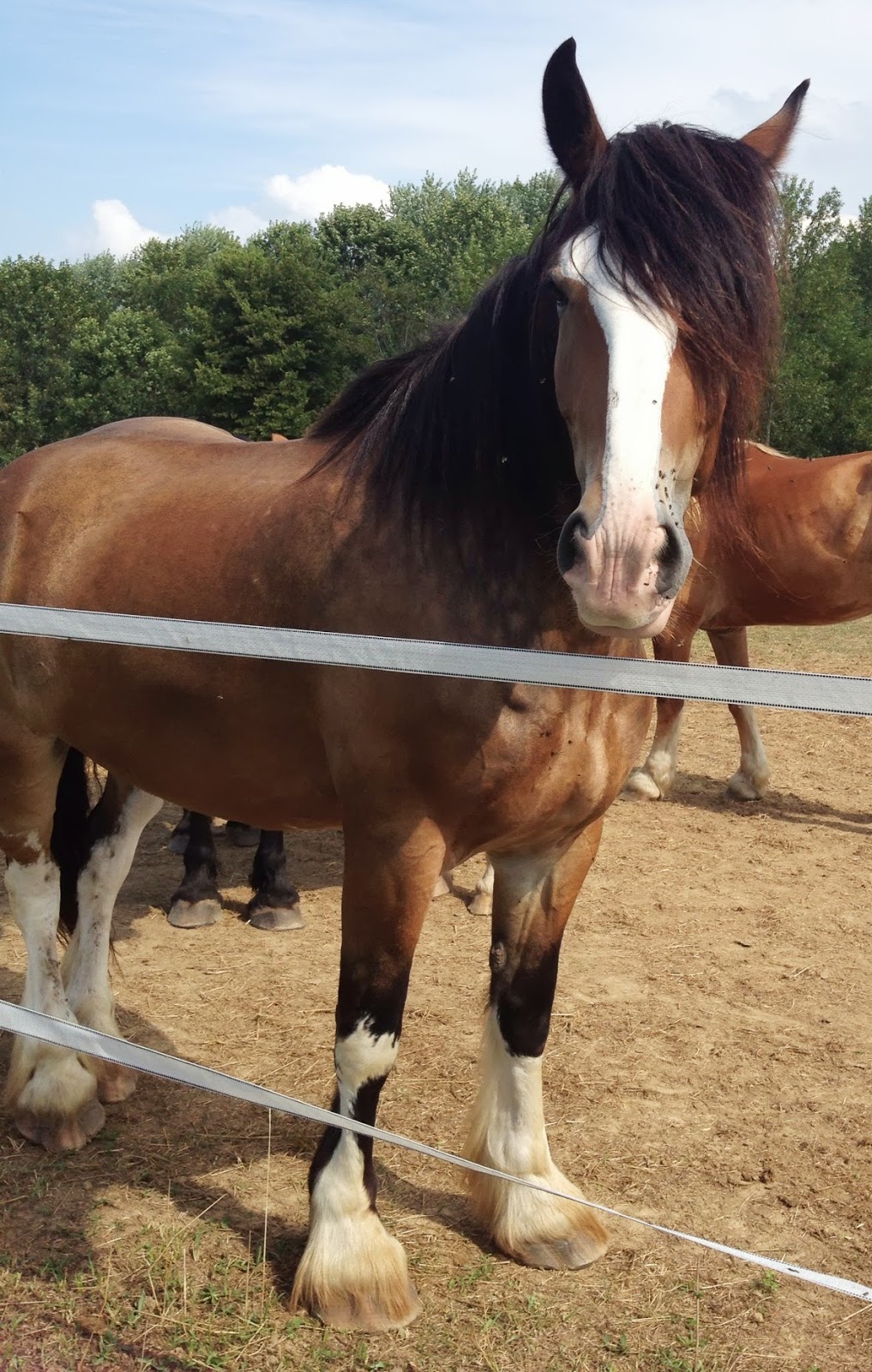 There are horses EVERYWHERE! Oh how I love horses. The best part is – the entertainment has a lot of rescue horses. Is it just me or does he totally have Justin Bieber hair? We walked up to the fence and he was hanging with his buddies and just walked right over to me – no hesitation – just boom, “Hey lady – will you pet my head?” Um – yes – yes I will! 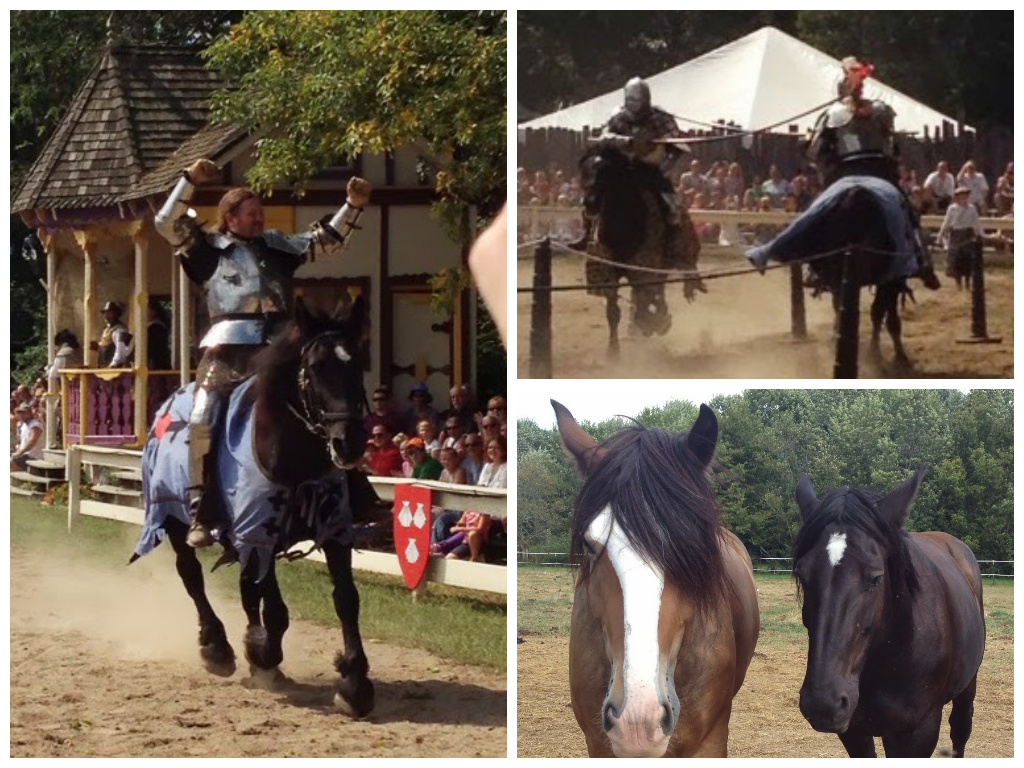 But then it was time for the main event – THE JOUST! I love jousting – my husband and I were religious watchers of Full Metal Jousting on History and the jousters at the Ren Fest are from that show! They do 3 jousting shows and they last about 30 minutes each. They really know how to get the crowd involved and it’s a great time. And… 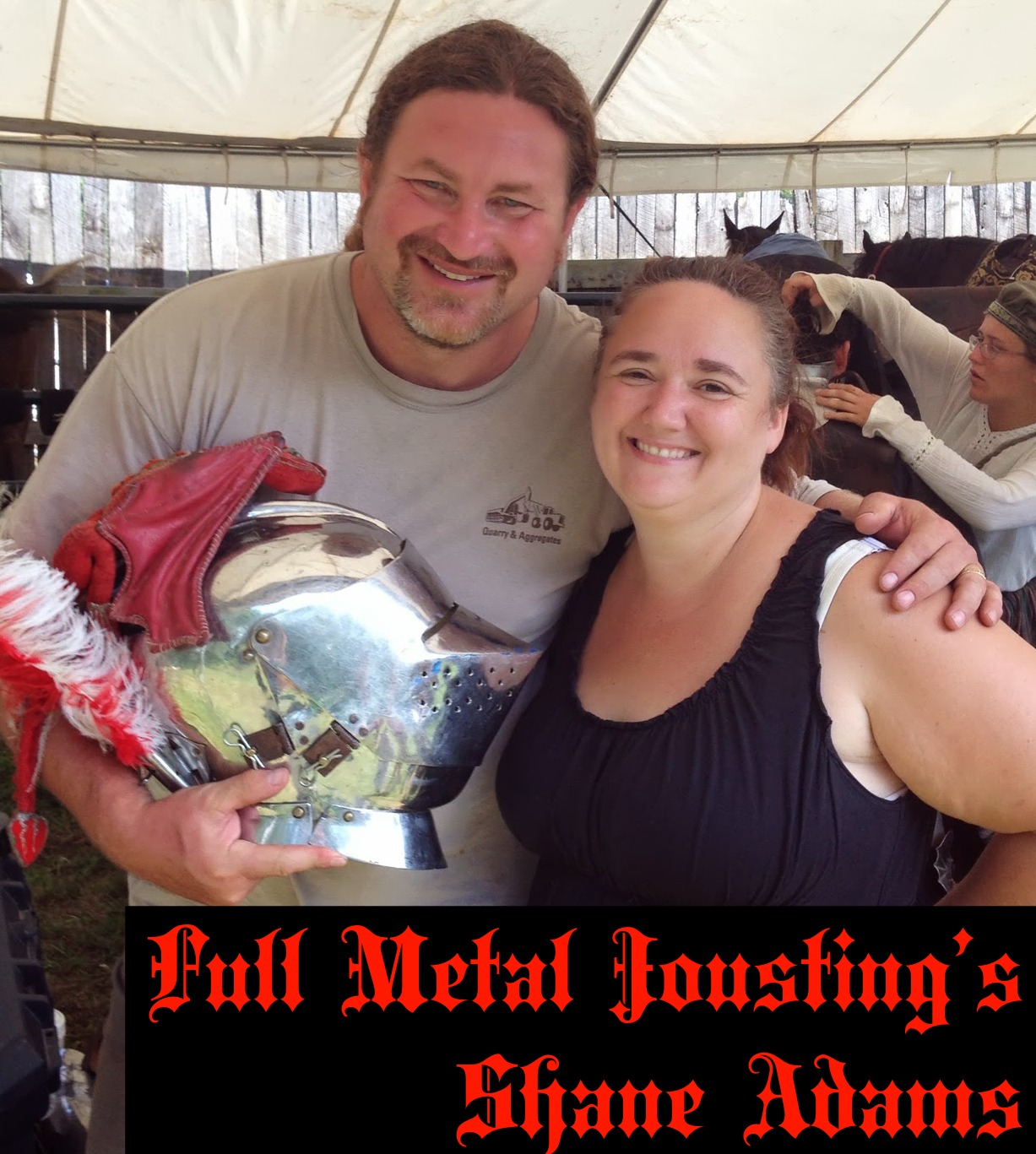 I got to go back stage and meet Shane Adams – host of Full Metal Jousting!!!! I was completely a nerd – I fully admit it. Shane was great – he’s the #1 Jouster in the world and the Ohio Renaissance Festival is his “home base”. His wife just had a baby (congrats Shane) and he’s going to be on the road for the world championships coming up. Lucky for me – he was in town for opening weekend and I got to find out all the scoop on the show. And let me tell you – these guys do not “pretend” joust – one of the guys ended up with a dislocated shoulder from practice on Friday. Next weekend, other guys from the show will be in town for the shows.

So just think about the impact here – two guys weighing 200 pounds and wearing 200 pounds of armor riding 2000 pound horses. That’s 2500 pounds each charging and slamming into each other with a big huge stick. Larry asked if it felt like football – Shane laughed and said, “No – it feels like a car wreck.” He offered to suit Larry up and beat him up a little but Larry wussed out! (Argh)

I can’t say enough about how great Shane was – he’s so personable and we could have talked to him all afternoon. But we had to watch him do his job: 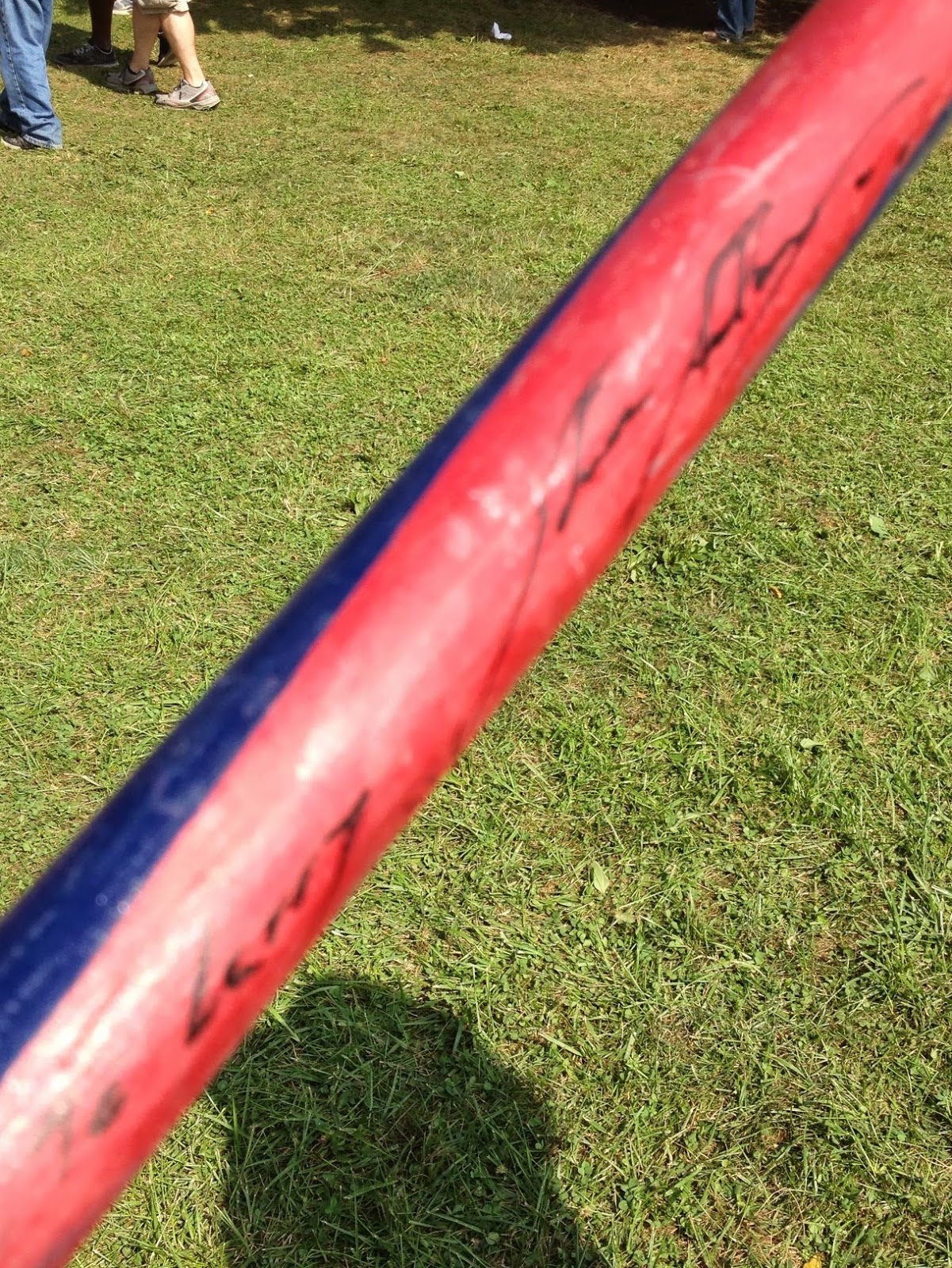 After the joust, we were able to buy a piece of a broken lance for $5 and the proceeds go to the rescue horses. Shane even sticks around after each show to shake hands, sign autographs and answer questions. Shane signed this one for Larry so he can add it to his man-cave. (Oye)

As for Full Metal Jousting – it’s currently being aired in the foreign markets and he’s still hopeful for a second season. If you want the show to come back – let History know!

Why Should You Go? The Ohio Renaissance Festival is a full day of fun. There is food, entertainment, games, shows, shopping and pretty much anything else you can think of. (Parking is $3 – fyi). It’s a blast and I can’t tell you how many people have been saying “Oh my God – I love the Ren Fest!! I go every year!” since I posted pics on Instagram. Every weekend also has a theme – so see if there’s one you love! This weekend is Irish Fest!

* Thanks to the folks at the Renaissance Festival for the free tickets and back stage access to Shane and his crew.