Subscribe
Disclosure: Visit Hamilton County provided this trip but all opinions are my own.
Recently I was invited to Hamilton County, Indiana – which is basically the north side of Indianapolis – for a Flavors Foodie Tour! I’d never been so I was definitely excited for a new place to go that was just a couple hours away. 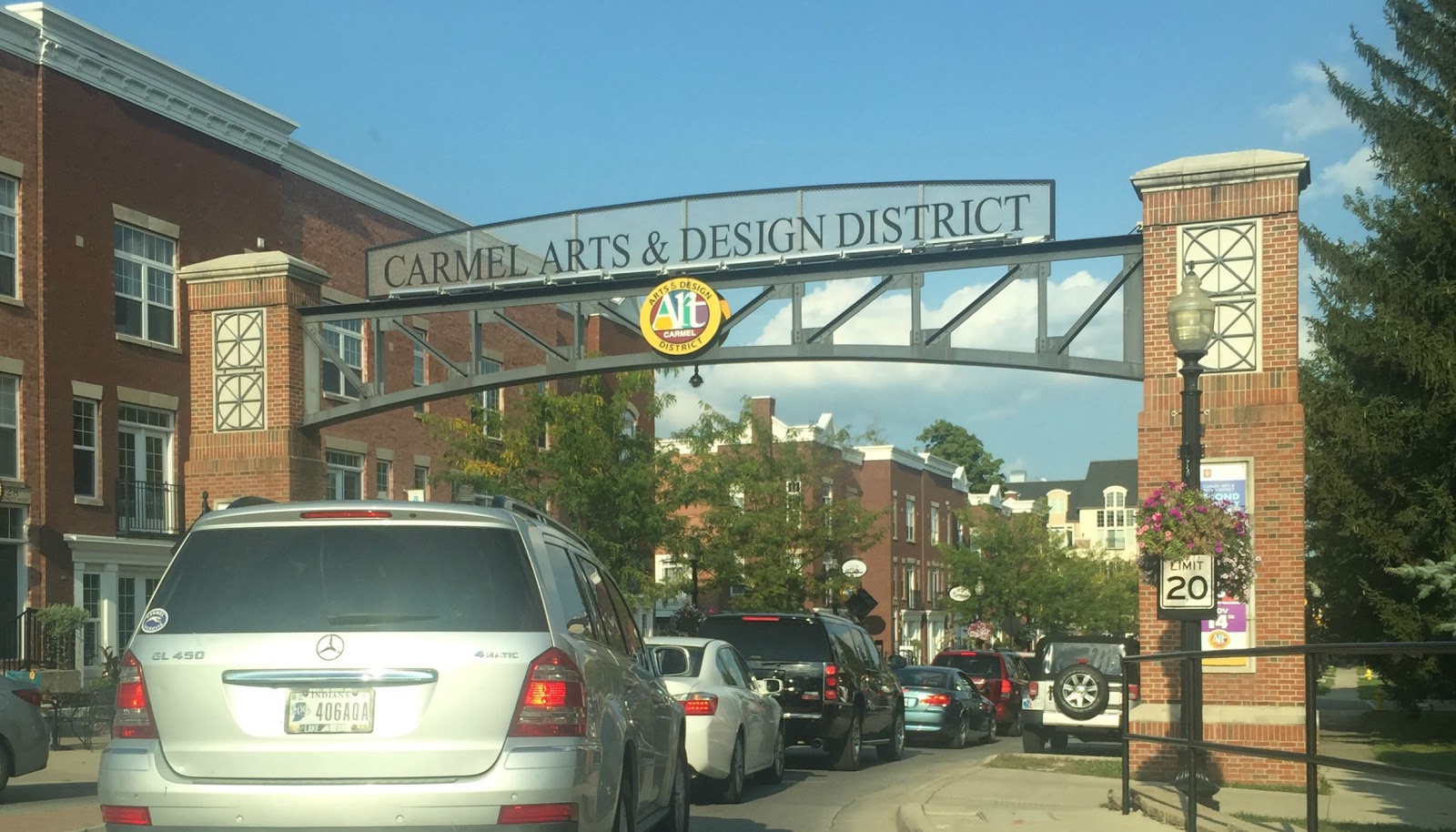 Carmel is the heart of Hamilton County and I must say – it won me over! Carmel is like Hyde Park on steroids! It’s got the greatest neighborhood “square” – it’s so much more than a square – it’s blocks and blocks of local shops and restaurants. It’s literally like you just stepped into The Truman Show (love that movie!). 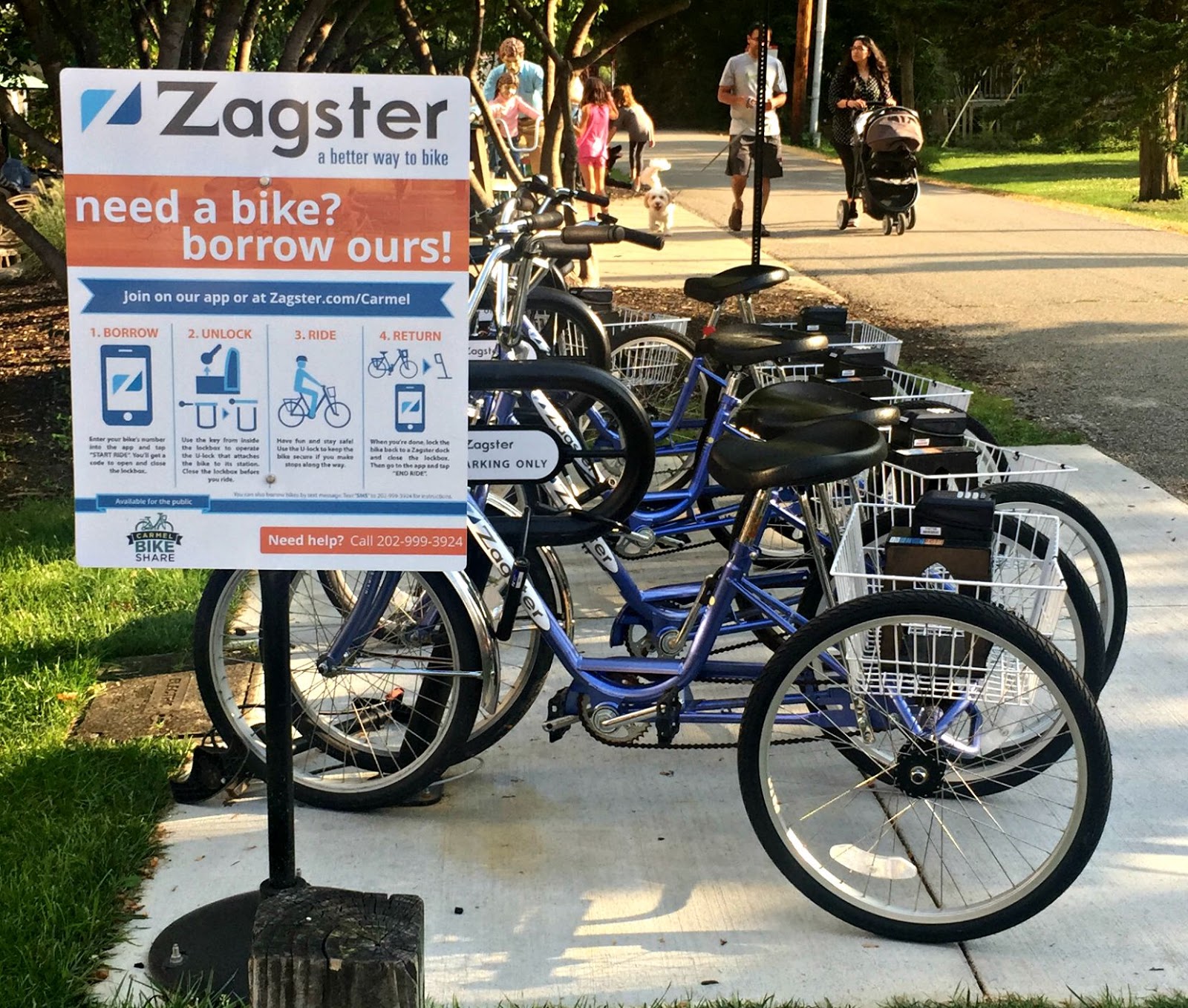 Thy have a bike rental system similar to Cincinnati’s – but the pricing structure is a little different ($3/hour vs. $8/day). I like the 3 wheel bikes – I don’t want to say how many years it’s been since I’ve been on a bicycle – so I think those look fun. 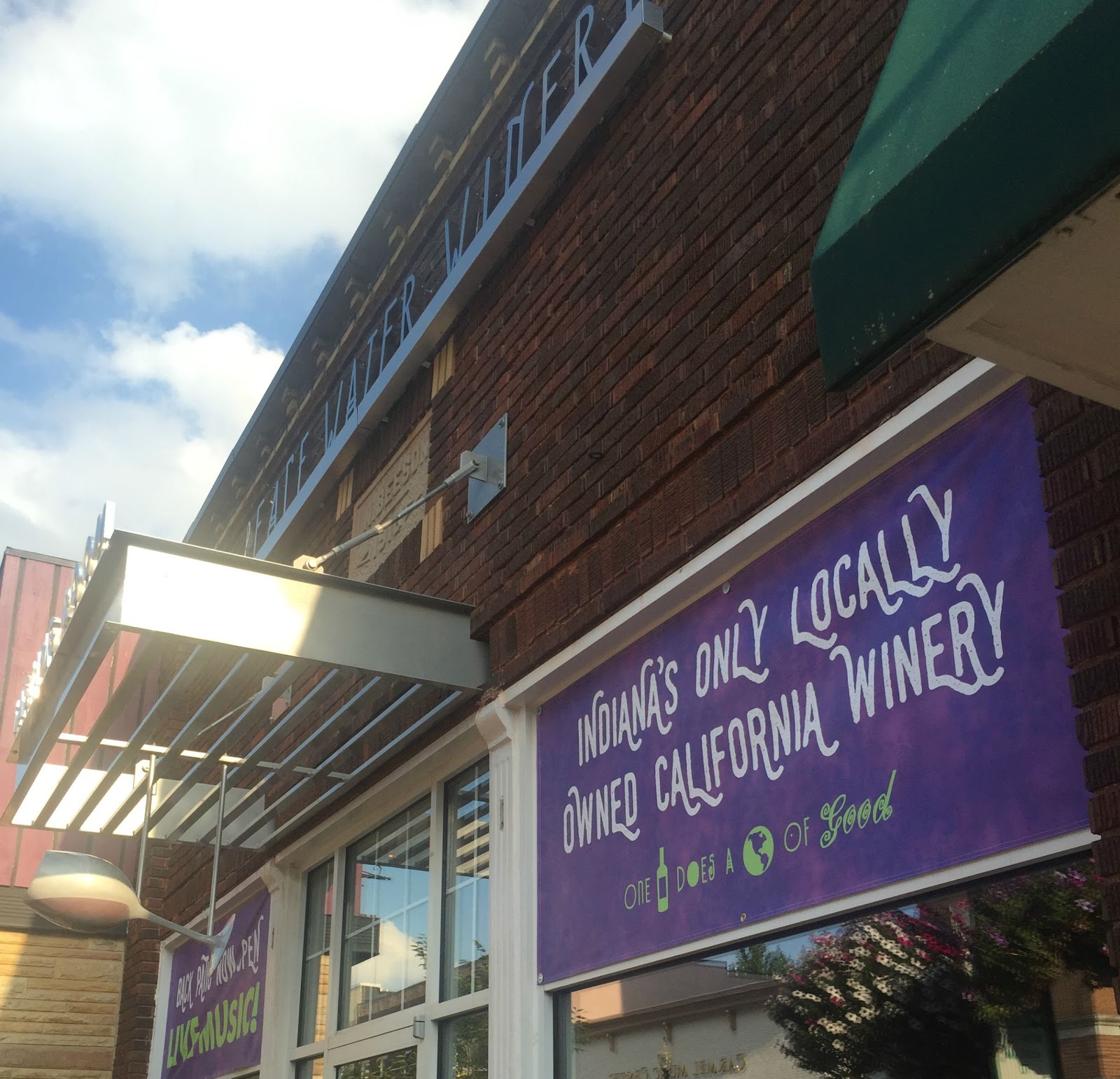 We started out our Indie Food Tour at Peace Water Winery in Carmel. As the sign says – it’s Indiana’s only locally-owned California Winery. What does that mean? The vineyard and all the grapes are in California but the wine made there is ONLY sold in Indiana. It’s interesting and produces very different wines. The grapes that can grow in Cali are very different than the Ohio grapes. 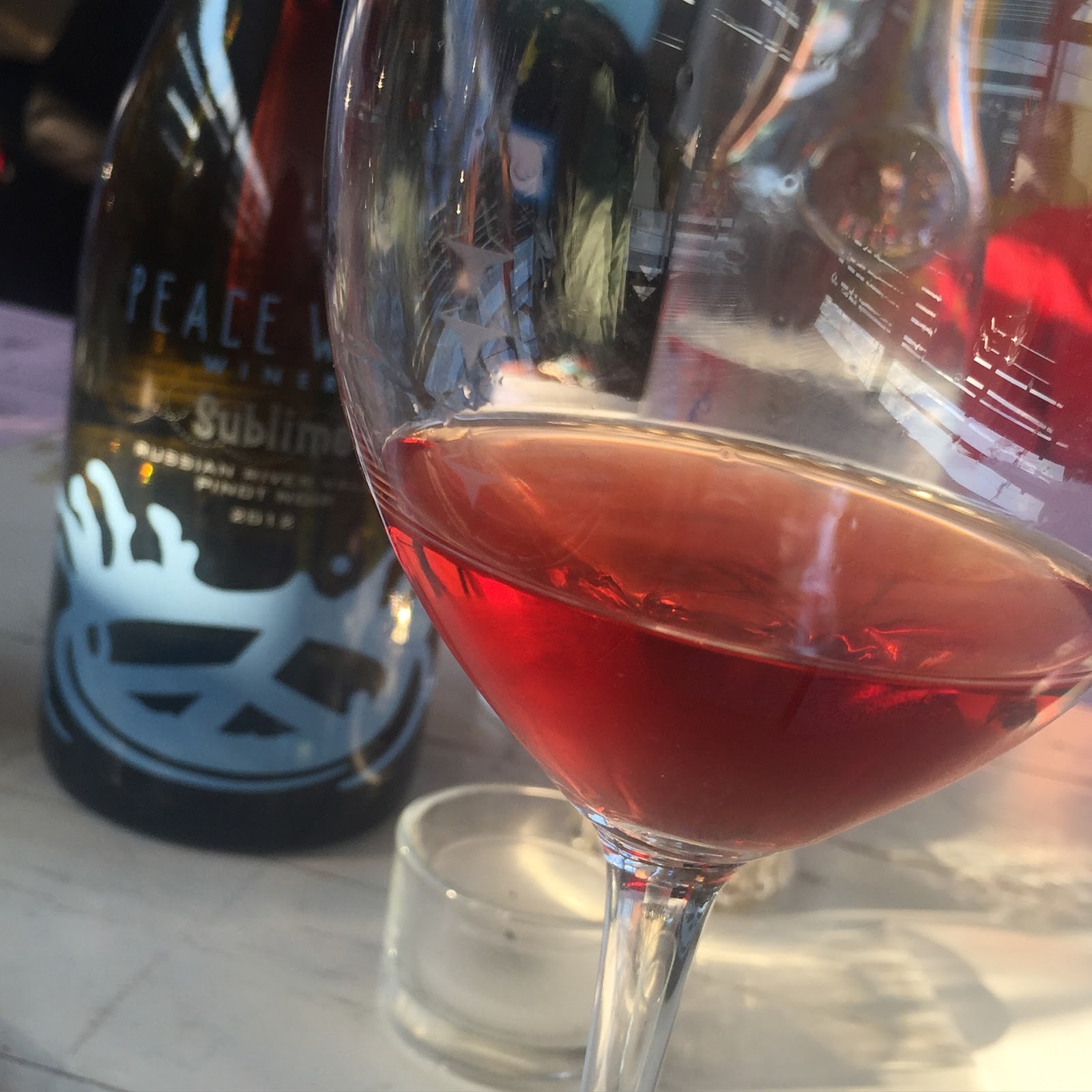 We had a wine tasting to start – they have 11 main wines – ranging from a $19 bottle of White Table Wine to a $128 bottle of a Cabernet Sauvignon. I definitely was more of a fan of the whites – but that’s pretty much par for the course for me.

We were seated on the patio – which is covered but open and airy and just so peaceful! So we’re just drinking and enjoying it – it was sublime (that’s the name of their Pinot Noir too!). 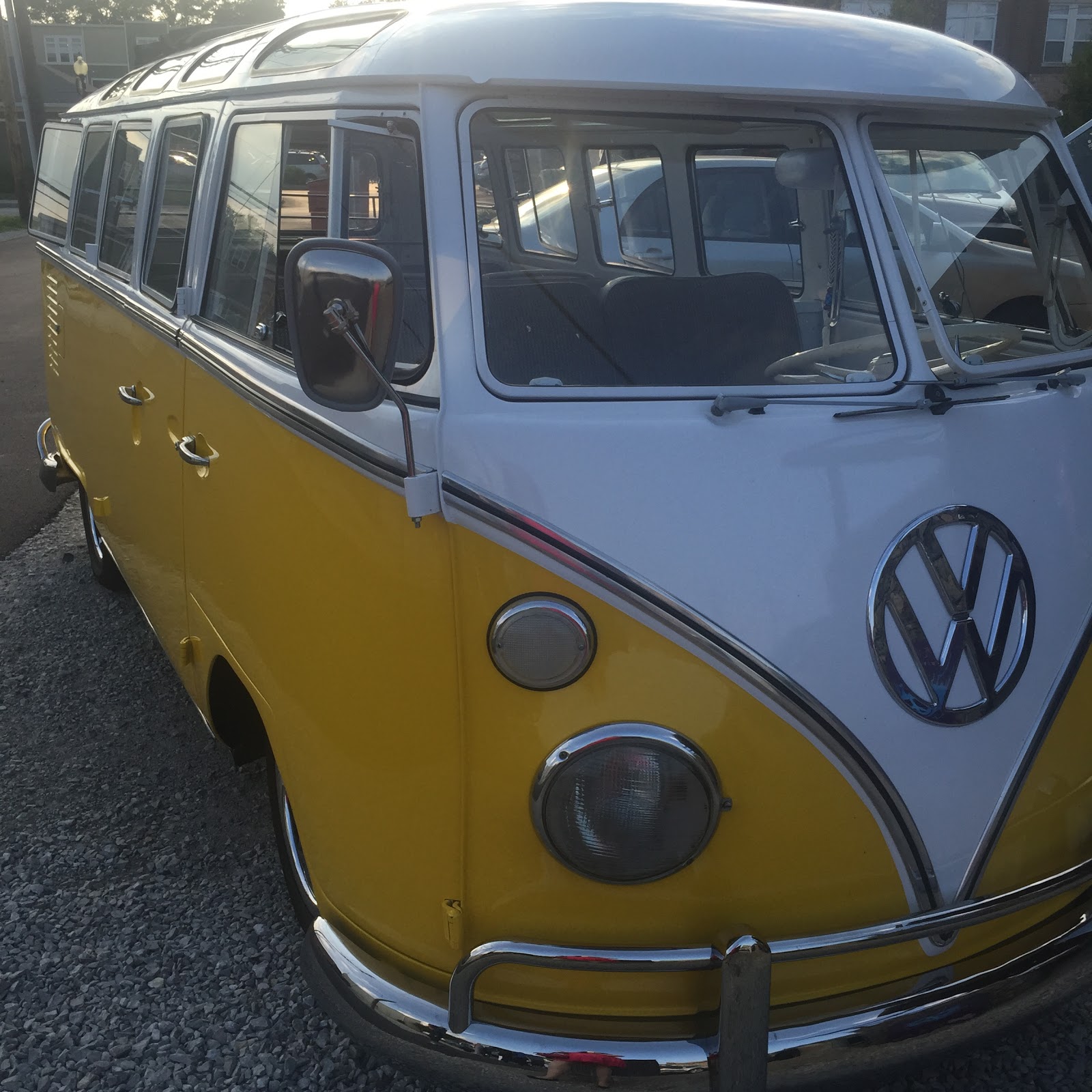 They even have a Vintage 1966 VW Van named Reggie. Seriously – the longer you’re there – the more enamored you’ll become and you haven’t even heard their story yet.

Reggie does deliveries for their Peace Posse – which is their wine club. Join and you get a “mommy drinks because she cares” t-shirt. Oh yes – it gets even better. 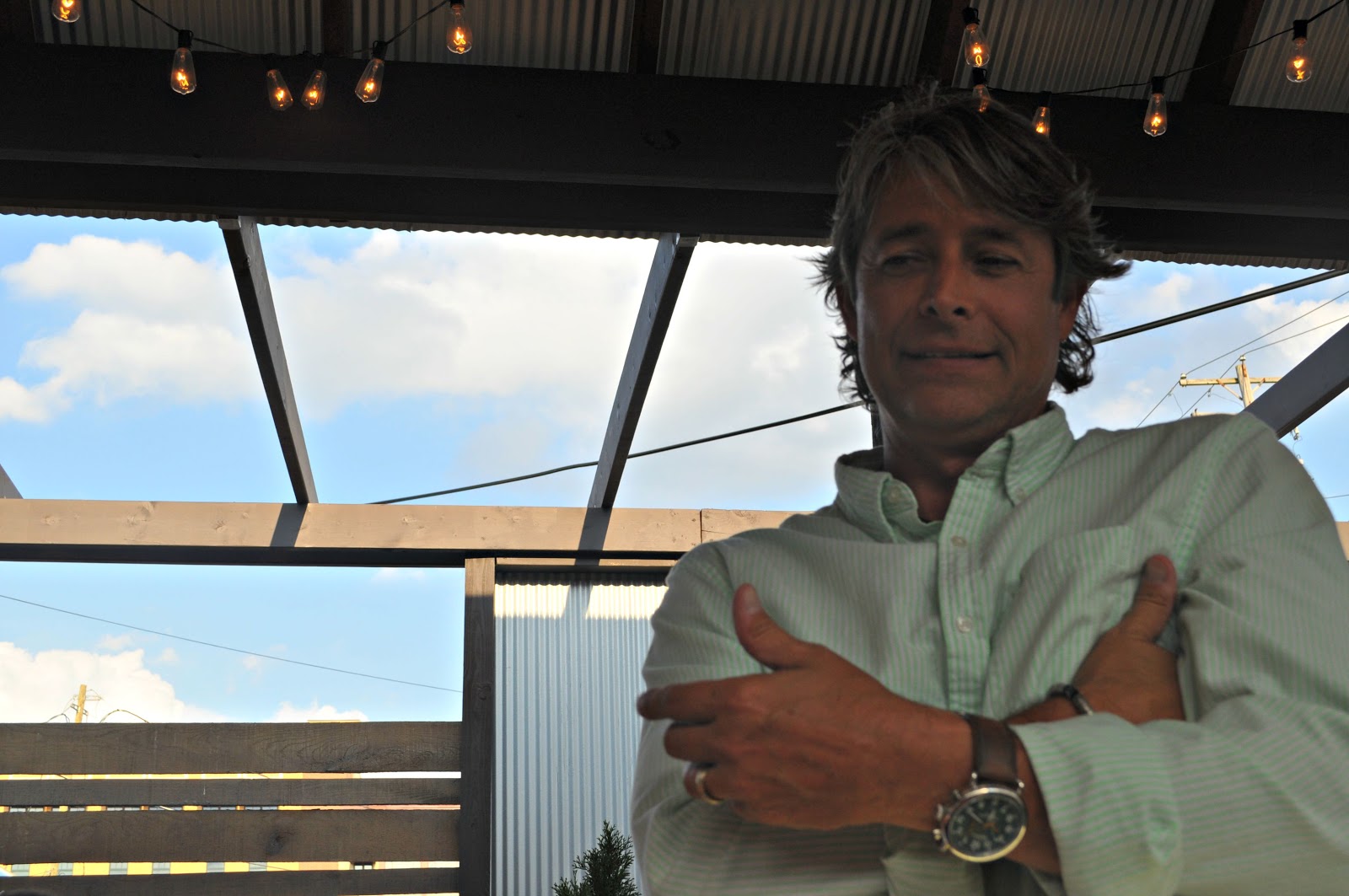 It was about this time in the evening that the owner Scott Burton came out to chat with us. First of all – he’s super handsome and charismatic (like John Stamos) – so ladies – make it a point to go! (My husband was like, “Are you staring at him?” Um – no..no..um well..yeah. #busted)

But looks fade – right? Well – amazing human beingness doesn’t. He started by telling us how amazing his wife is. She’s raised EIGHT kids and a zoo of various animals. (Seriously?!) Then he tells us about how he switched from corporate America to entrepeneurship. And then – they decided to do something for others – by opening the winery. 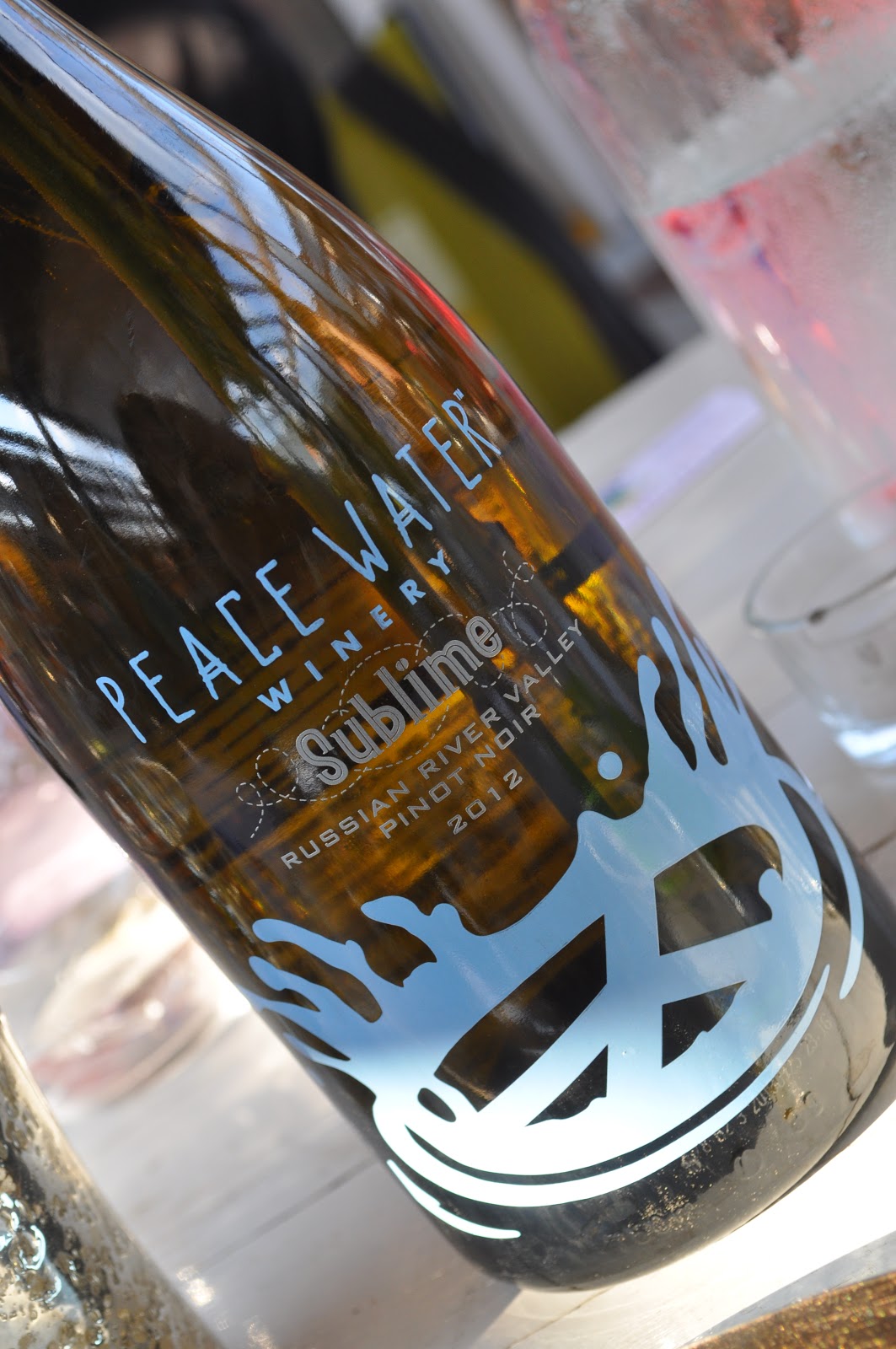 They also have included their kids in the business (not in drinking – except for the 21+) – the kids have taken part in the label creation and all the charity work. The family chose all the decor for the winery as well. It’s got a definite country feel – but like country-chic – not country-doily. 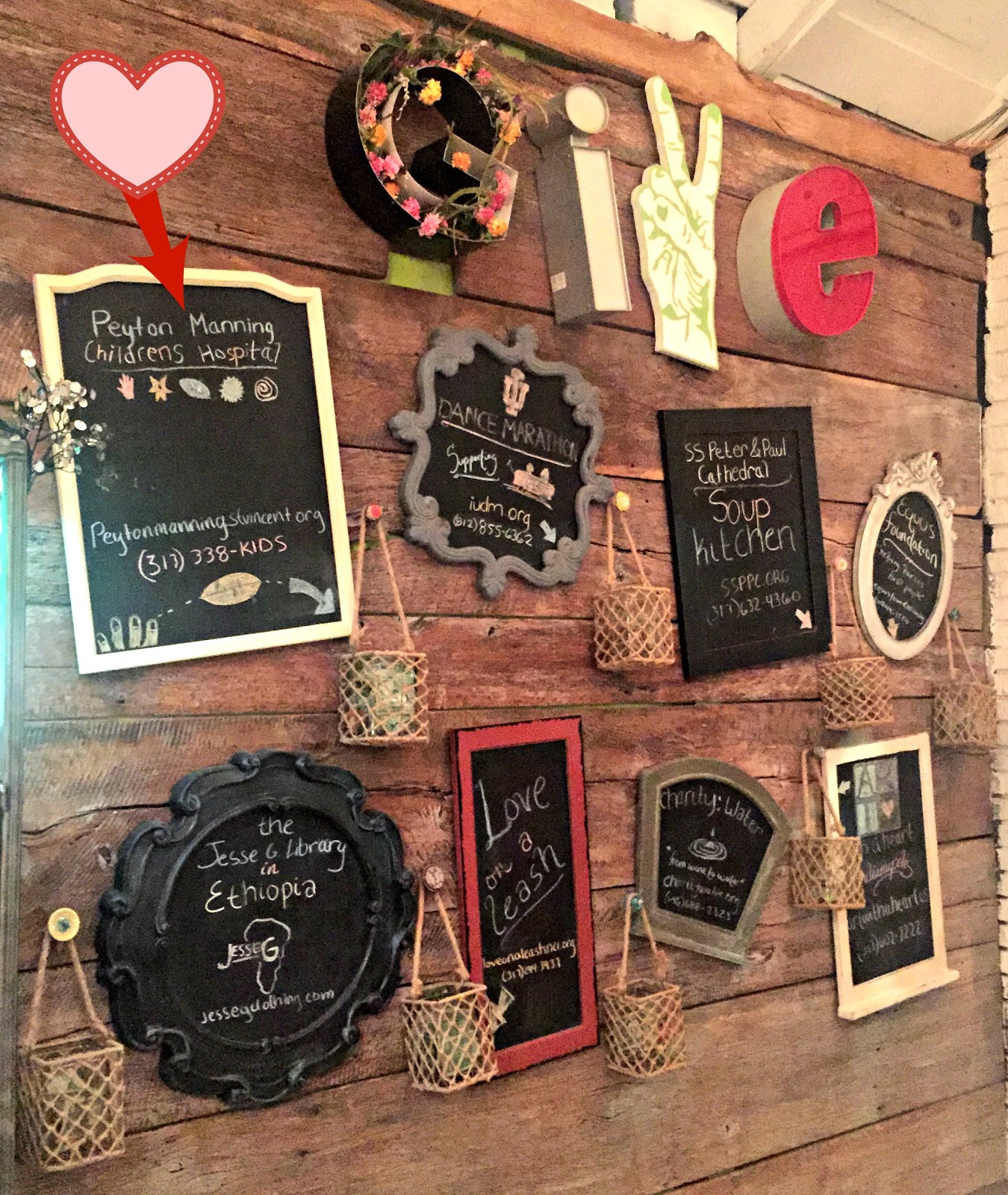 And – before you leave – you’ll definitely stop by the Give Wall. Each of the kids has chosen a charity (heck a couple even STARTED charities!). When you purchase a wine – you get a token – and you deposit it into the basket of your charity of choice. There’s everything from my “other” husband Peyton Manning Childrens Hospital to an equine charity (yes – my token went to the horses!) and everything in between. Oh – and they don’t take tips. If you want to leave a tip – leave it in the basket.

Seriously – I fell in love with this place more by the minute. Be sure to make a special trip if you head to Indy – it’s worth it. (Peace Water Winery – 37 W Main St – Carmel IN) 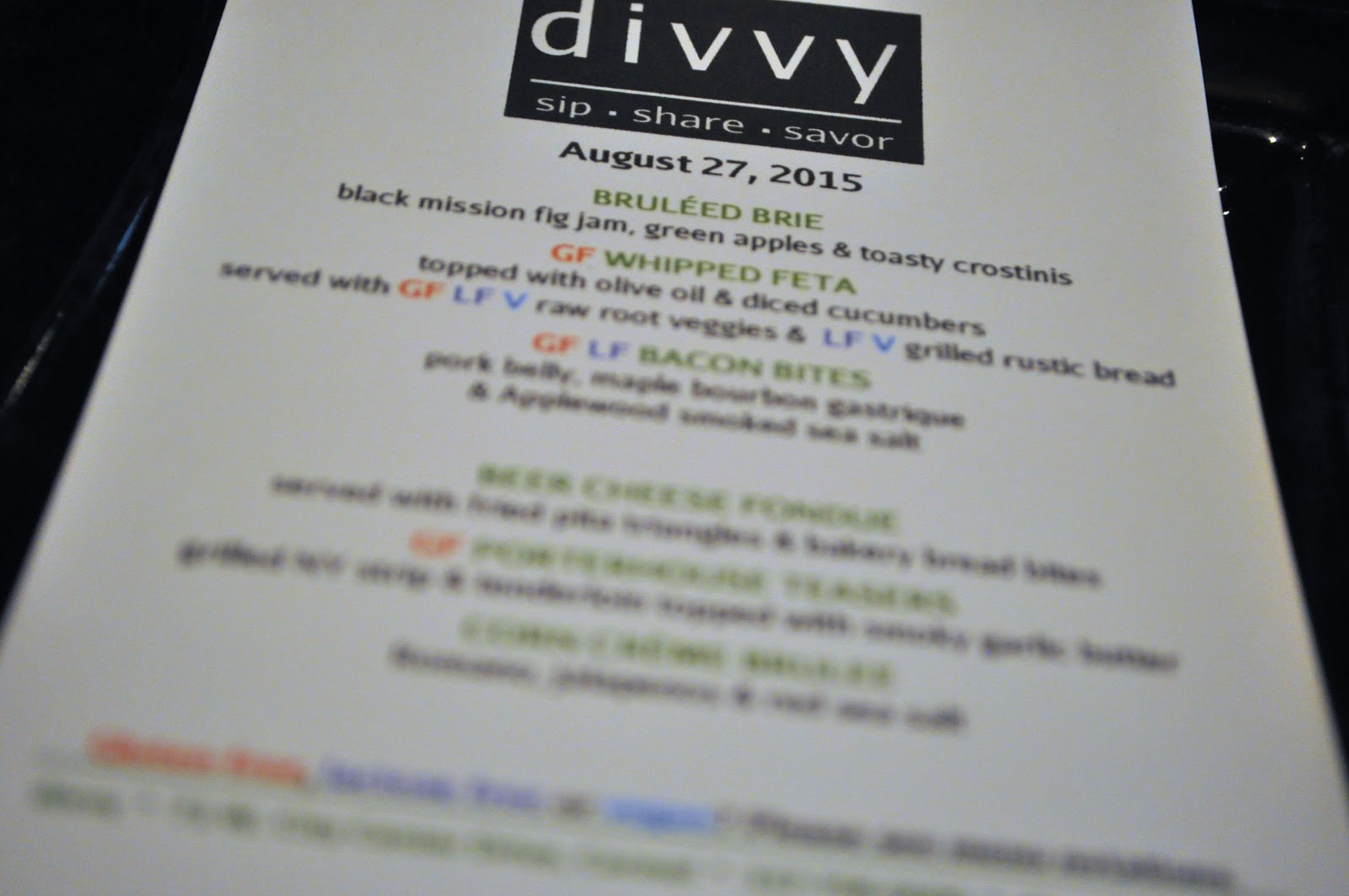 Next up – we hopped in a Limo bus and headed to Divvy just a few minutes away. The menu was waiting for us at our table and all I had to see was Bacon Bites and I was sold.

Divvy has a very modern decor – with tables in the bar area made of cement – this wall of wood that was made by hand – with hundreds of little squares of wood – and just clean lines all over the place. It’s very slick but still comfortable. 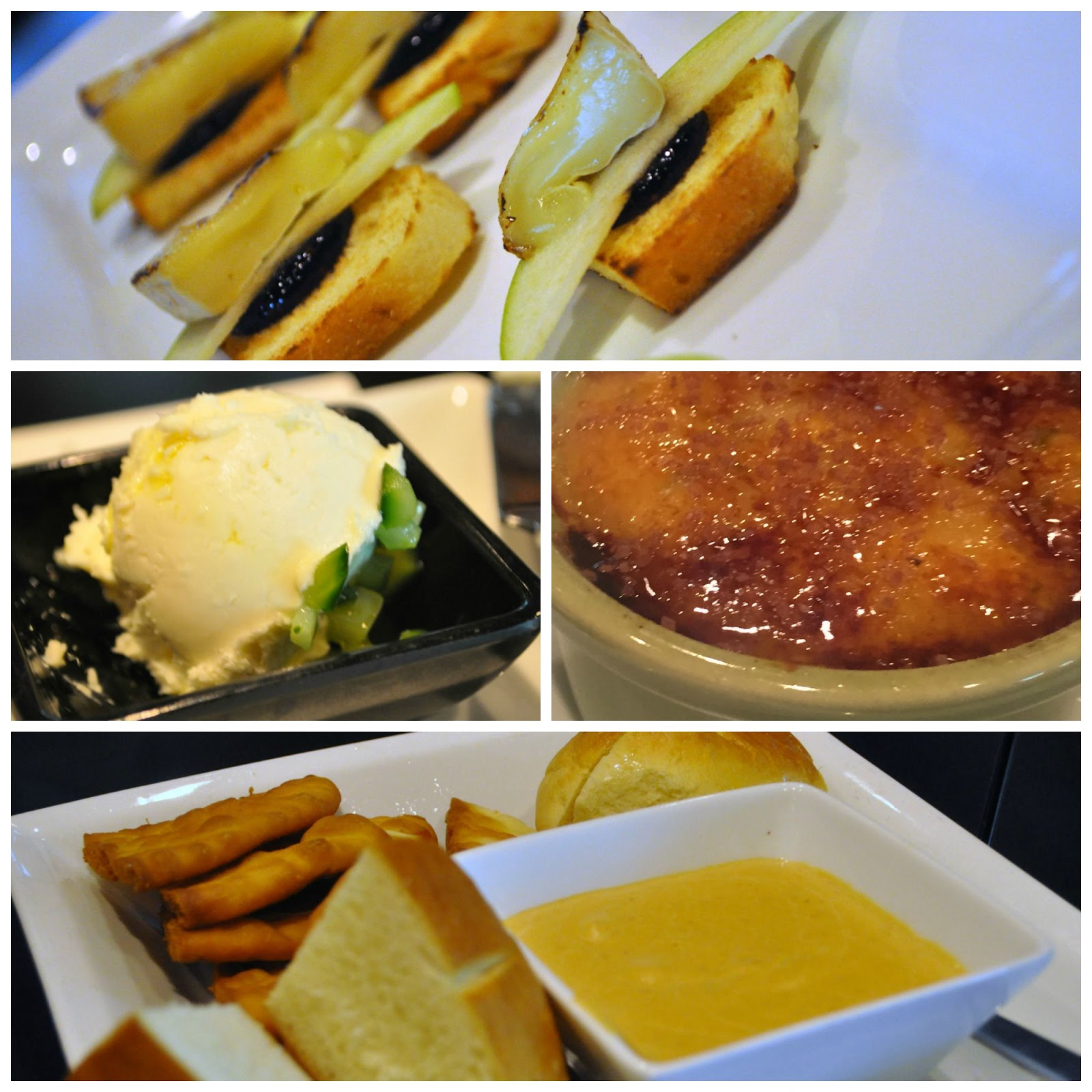 We had a variety of tapas – which is their specialty – from Bruleed Brie to Whipped Feta – from Corn Creme Brulee to Beer Cheese Fondue. Of these – let me rave about a couple of items in particular.

First – the Corn Creme Brulee with Romano, jalapenos and red sea salt. Basically it’s creamed corn with a kick and a bruleed top. My husband is not typically a vegetable lover or even a lover of spicy – but he reluctantly tried this one. After one bite – he was SOLD! He at probably half the bowl and declared that we were DEFINITELY making the drive again to come back just for that. That’s high praise from Mr. Hussy.

Second – the Beer Cheese Fondue served with fried pita triangles and bakery bread bites. Pita triangles are great – but fry ’em and wowza – so much better! I’m not the biggest fan of beer cheese – it can have a funk with it because of the beer – but this was DELICIOUS! It was thick and cheesy but still natural tasting (not like Arbys cheese sauce). We both loved it! 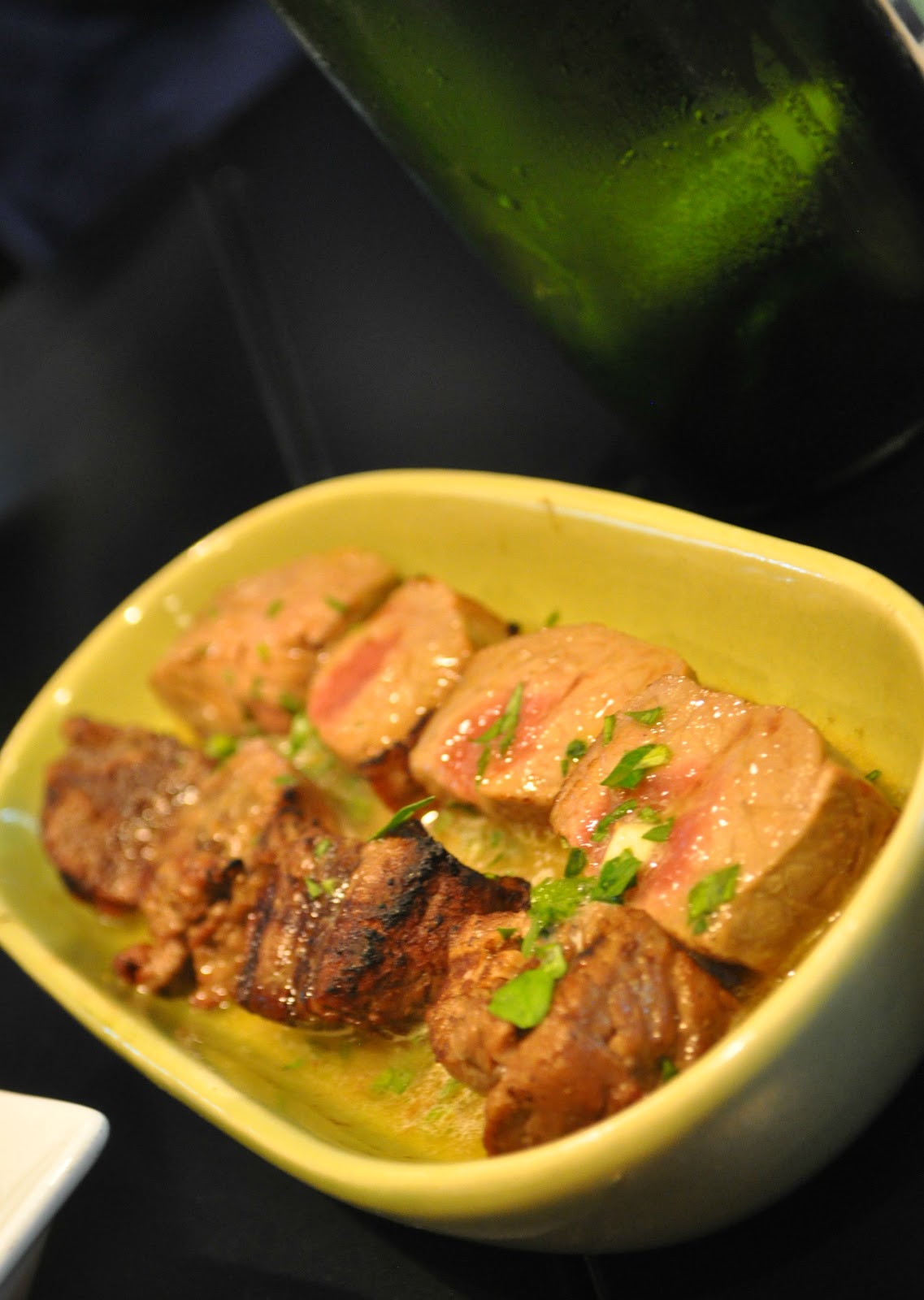 The one item that looks beautiful – at least with my camera – was the Porterhouse Teasers – grilled NY Strip and tenderloin topped with smoky garlic butter. Unfortunately it wasn’t our favorite – the tenderloin was more tender (duh) than the strip and it just didn’t have a lot of flavor. It was cooked well but wasn’t that much of a stand out. But – there are so many places to get steak – try all the other stuff – hell – cook your steak at home – it’s what I do. Now on the other hand… 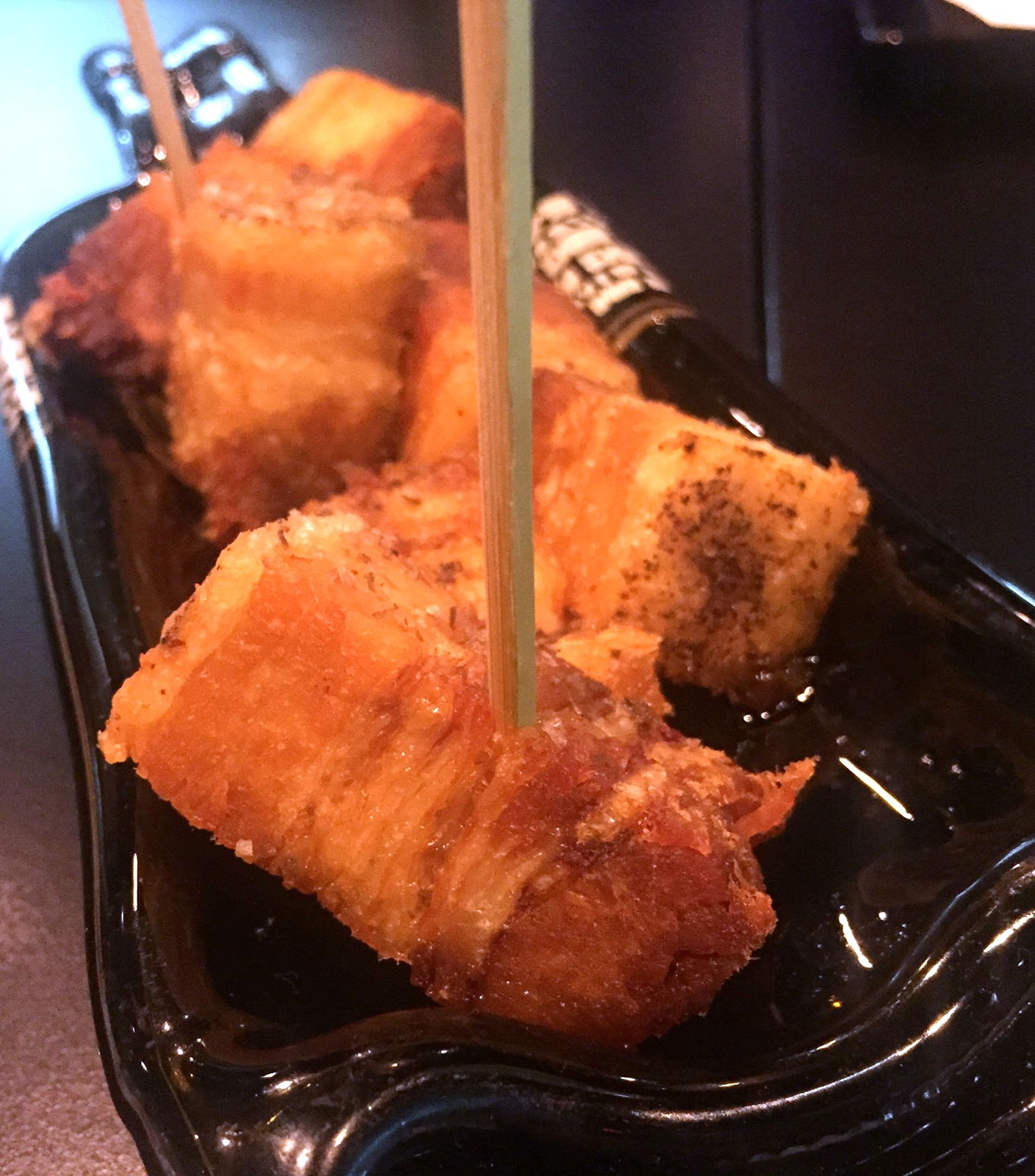 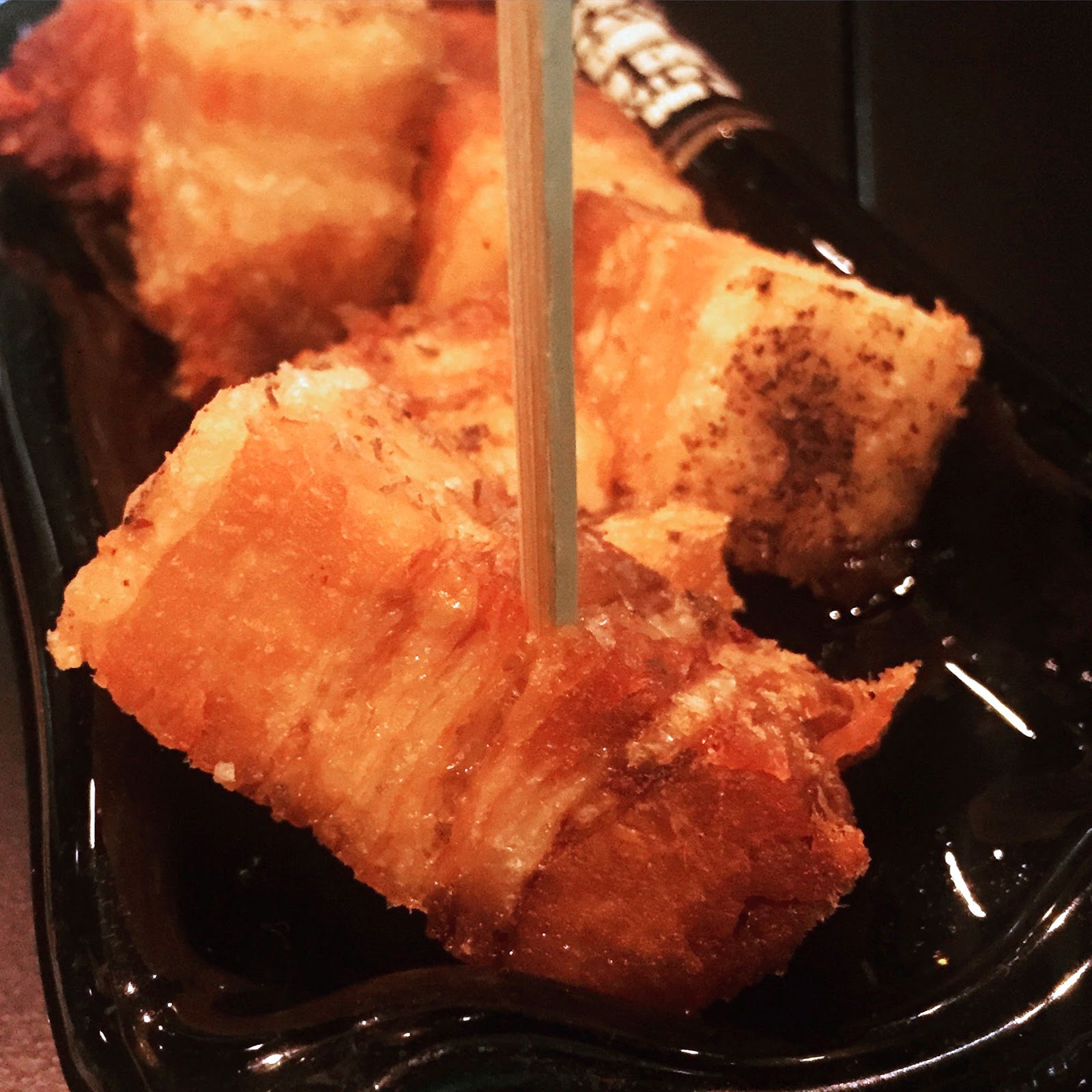 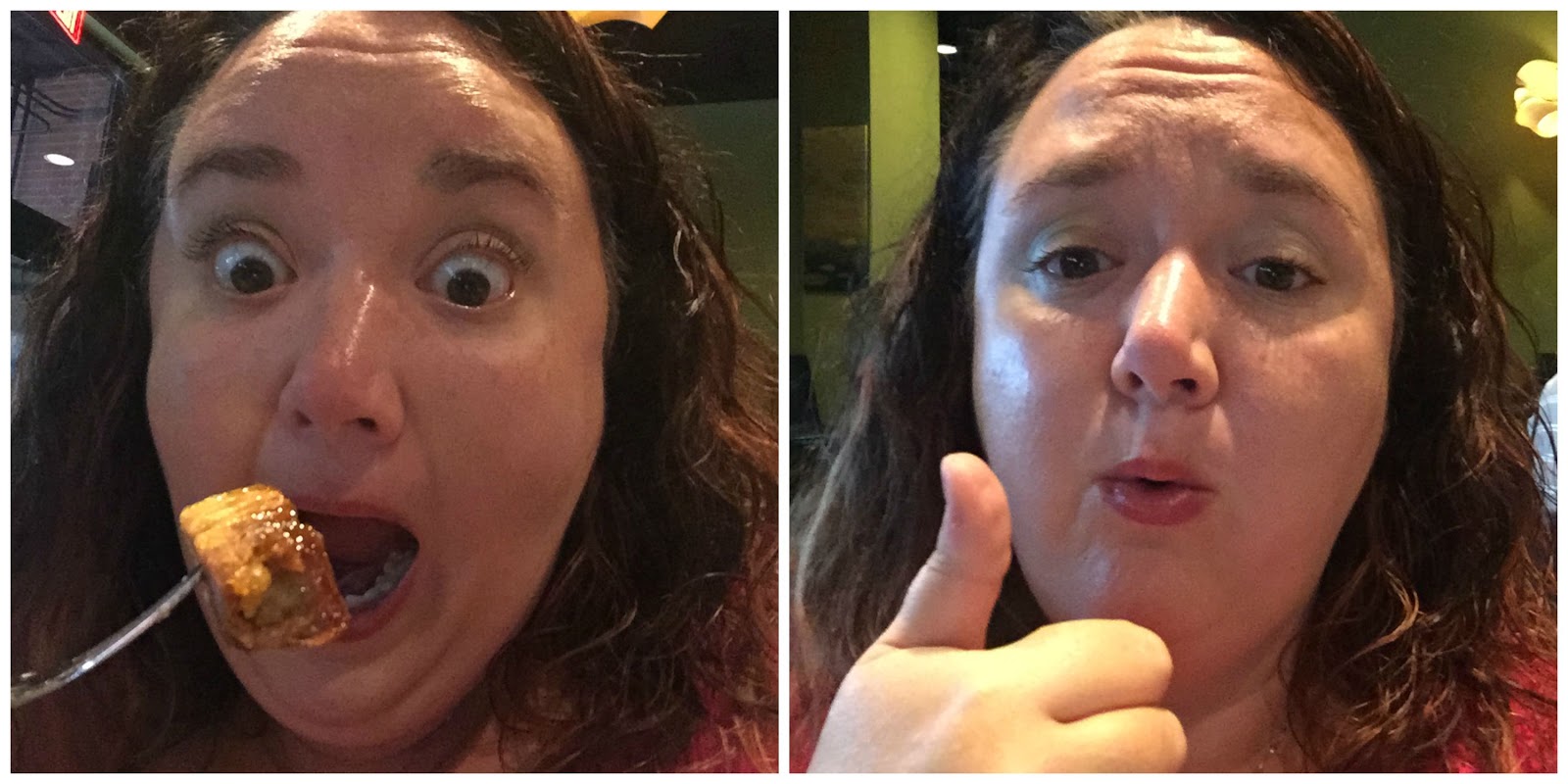 I might have eaten an entire dish of it. We kept passing it around so I was sharing – I swear. But then there was some left – and everybody said they were done – so yeah – I totes cleaned the plate. See the pork belly was deep fried and then there was the maple bourbon gastrique in the dish for you to dip it in. Seriously. Don’t give me that look – you’re just jealous you weren’t there with me. This dish is $6.45 – so the price is great too!

And for more about the restaurant – Kevin “Woody” Rider is the owner and mastermind behind the small plates that you can “divvy” up! (Get it?!) His wife is the executive chef and when they were asked to come up with a concept for their restaurant – they knew immediately what they wanted – the small plates. They love tastings and would much rather share a bunch of small plates – I AGREE COMPLETELY!

Next up – back to the bus and over to Upland Brewing Company. Yes – Indianapolis has been overrun by craft breweries just like Cincinnati. Upland is actually one of the oldest breweries in Indiana and has been around for more than 20 years! 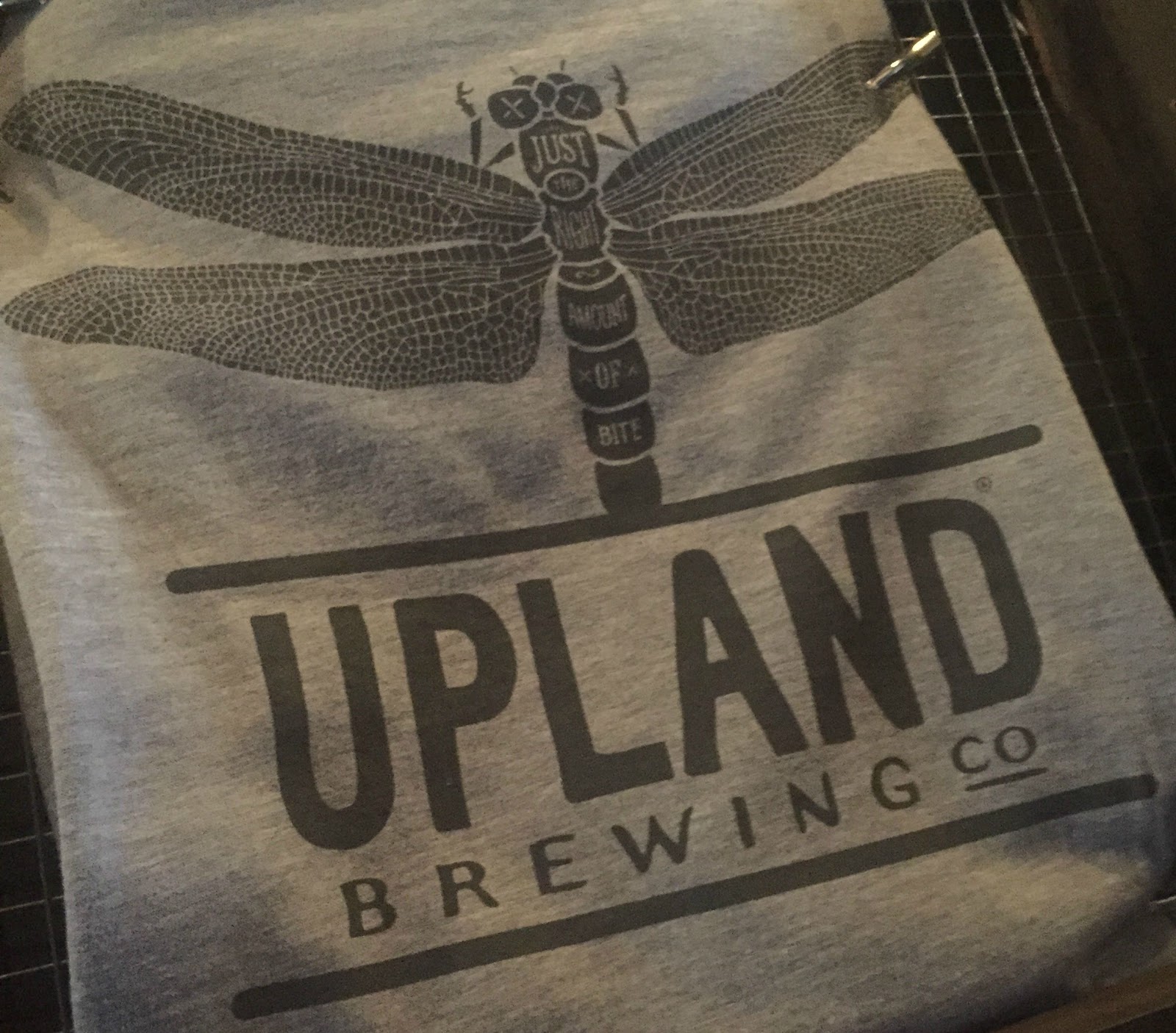 Upland has a great feel to it – very natural and clean lines – with unique shirts and glasses. Their regular set of beers includes an IPA, wheat ale, pale, porter and a champagne pilsner. One of their specialties – and award winners – is their sours – which are brewed on-site at their Bloomington locale. The beers were even featured on NBC’s Parks & Recreation! 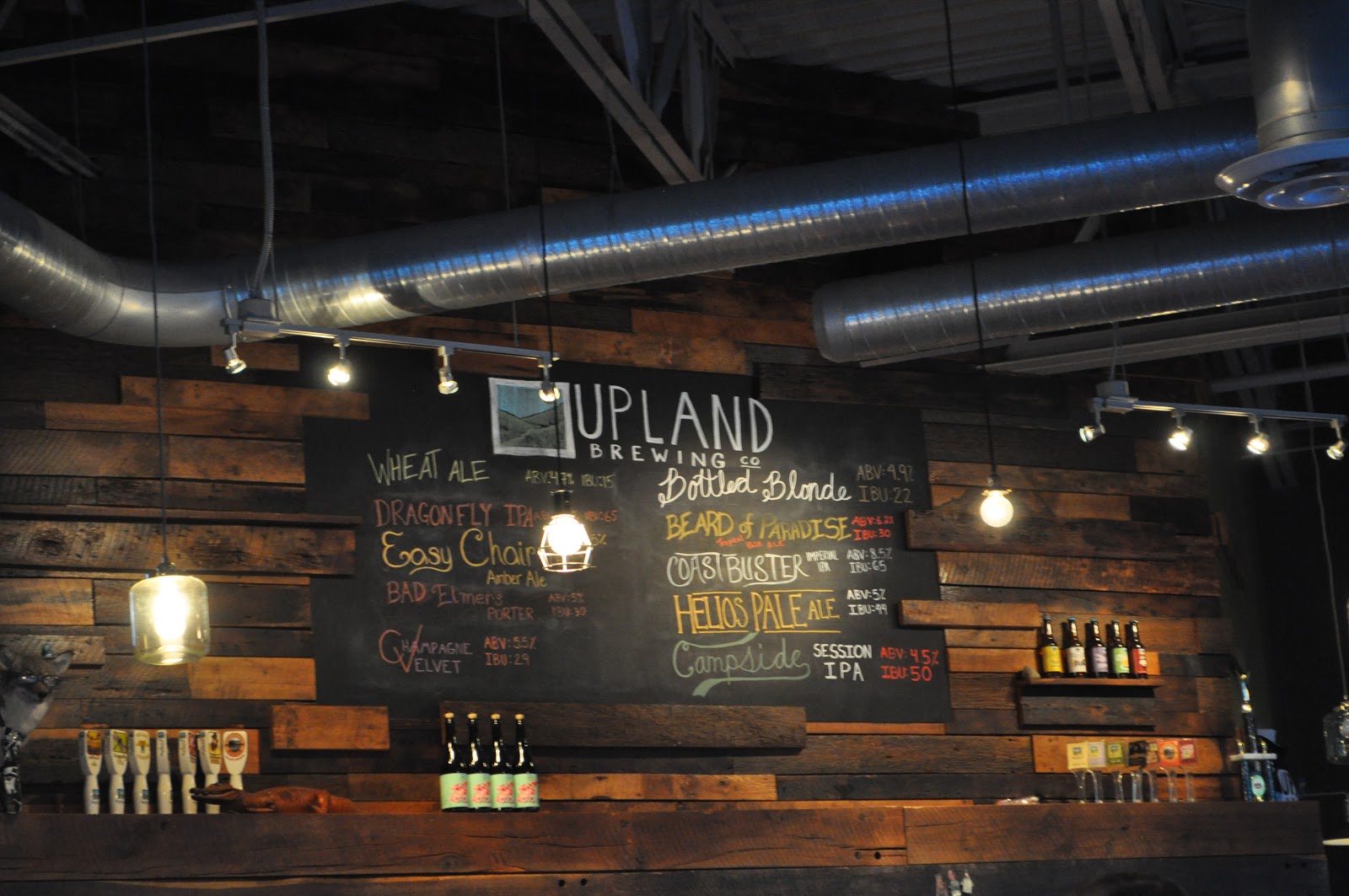 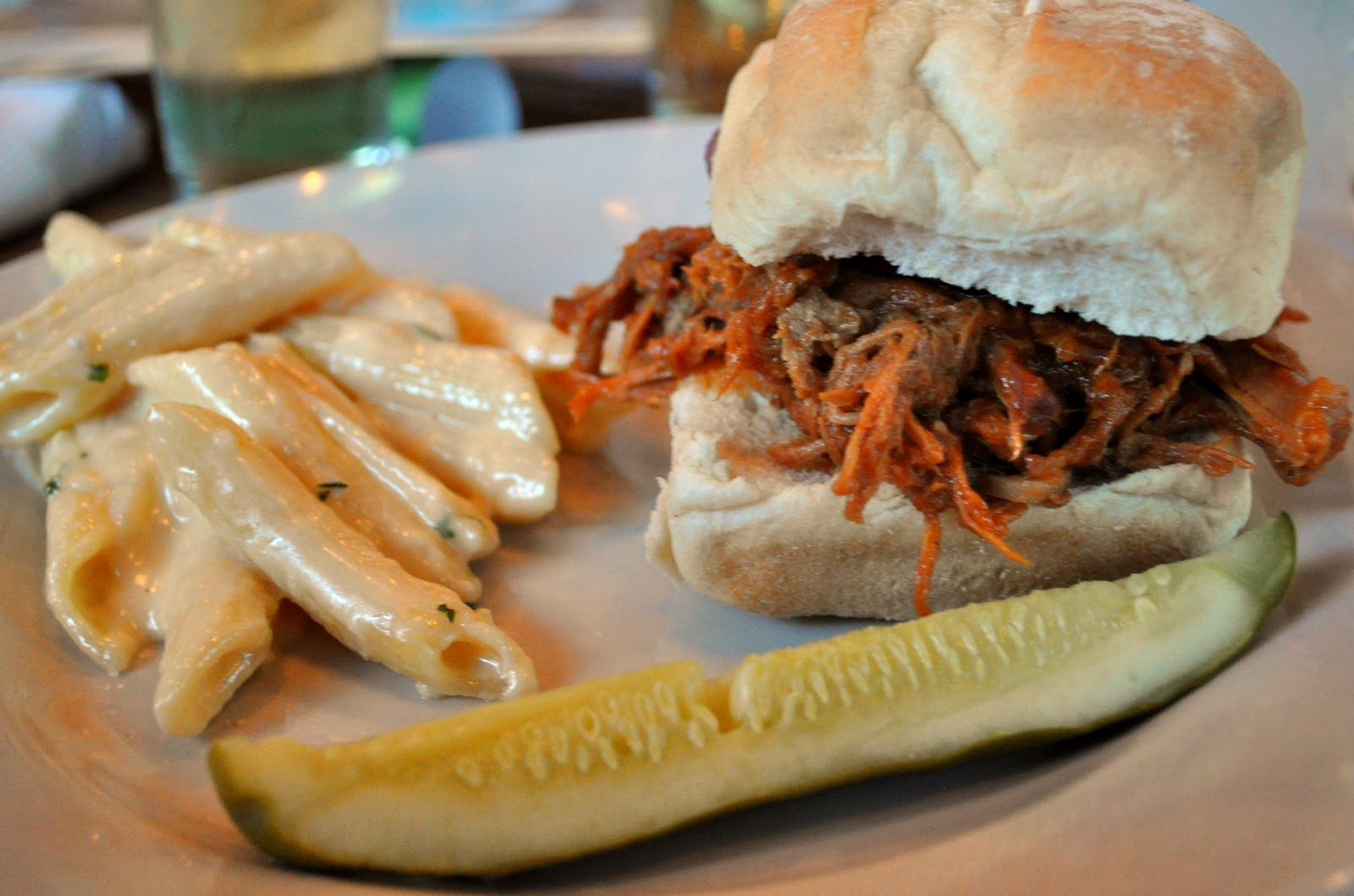 In addition to the beer – they also have a full restaurant menu. We tried their pulled pork and Wit Mac & Cheese. Both were REALLY good. The pork was nice and tender and the mac & cheese was creamy perfection! Be careful with allergies though – my sandwich had coleslaw on it (mayo) and we told them ahead of time about Larry’s allergy but they still served it to him. They actually brought it over saying “this is for the egg allergic person” – luckily – I’m hyper-vigilant and noticed and had them bring him a different sandwich.

I didn’t love the beer but the food was great- so I would definitely go back.

Our last stop was Chocolate for the Spirit where we met with owner and Master Chocolatier – Julie Bolajack. Yeah – you can become a MASTER CHOCOLATIER! I don’t seem to remember our guidance counselor mentioning that. 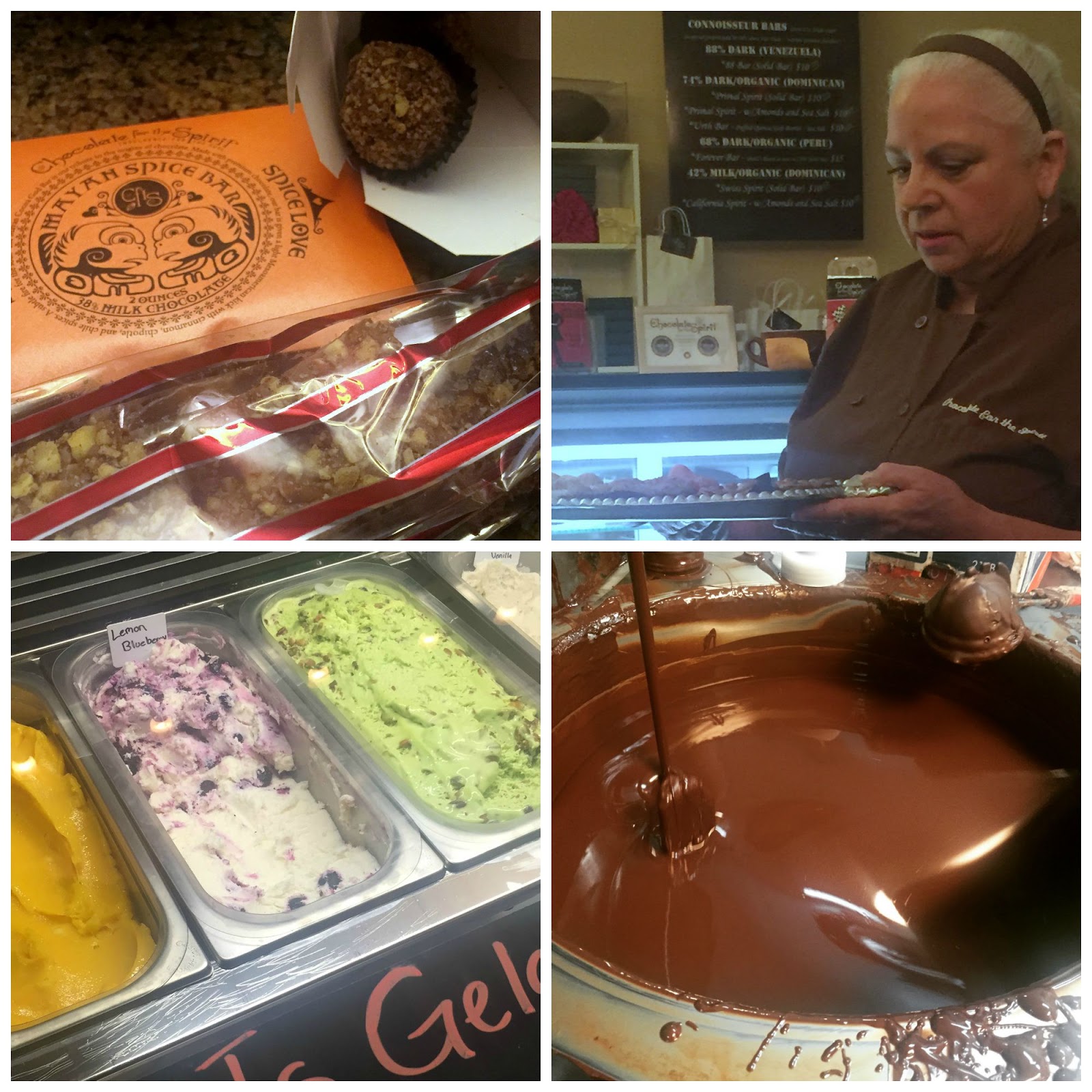 Julie, pictured top right, just brought home 15 awards from the 2015 International Chocolate Salon. Yeah – 15!! One of the most award winning is her Mayan Spice Bar – pictured top left. The Mayan Spice Bar is just plain crazy – we heard someone say that it’s best – if possible to eat it with her – because she will walk you through all the flavors that your tongue will explore – bite-by-bite. I couldn’t really imagine that – until I bit into it. Every single bite was different!!! It’s pricey at $10 but it’s unique enough that it’s worth it.

(They also have gelato!) 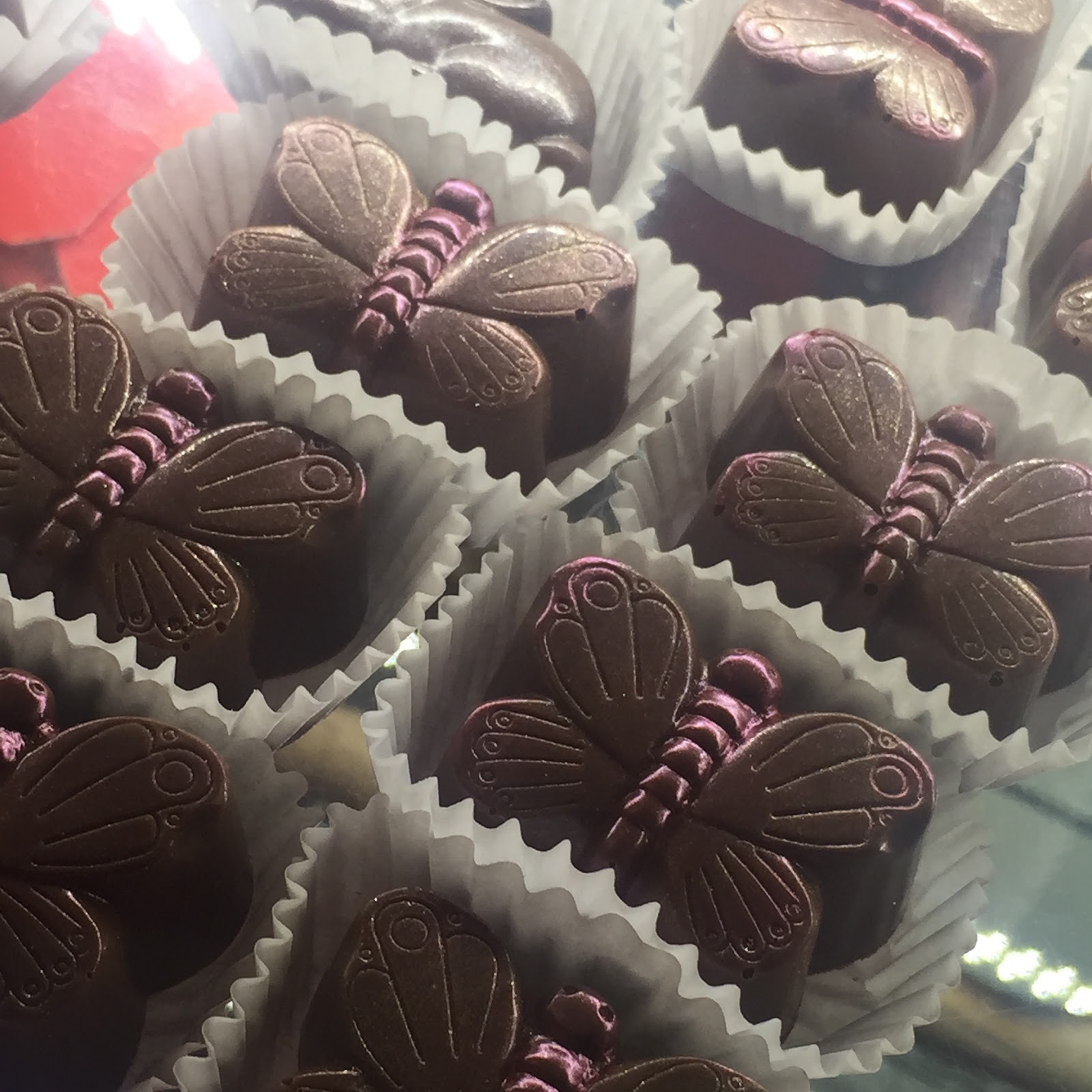 We tried a lot of different chocolates – and they’re all exquisitely beautiful.

One VERY special thing about Chocolate for the Spirit is that Julie is one of only 12 chocolatiers in the US that has access to the RAREST chocolate in the world – Pure Nacional from Peru. (not displayed above – that’s just another pretty chocolate) They actually thought this chocolate was extinct for a while – but it’s been rediscovered and is super rare! We each got to try a tiny bite – so rich – so good. 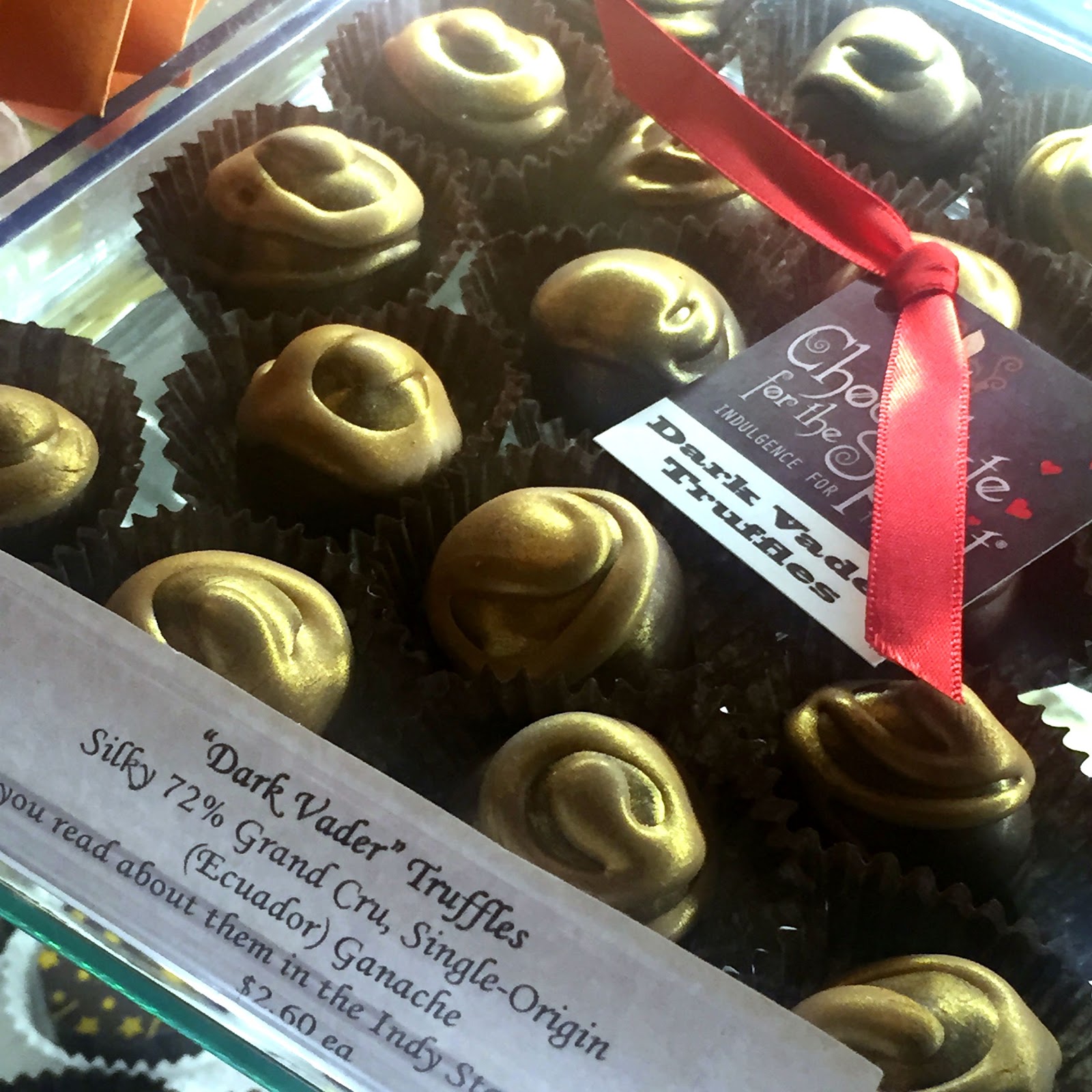 Julie is definitely an amazing talent – and oddly enough – she started as a computer programmer! But now – she’s making things like the Dark Vader – which is made of 72% Dark Chocolate Ganache from Ecuador and then dipped in that same chocolate. Oh heavens. It was AMAZING! Larry and I both agreed – this was OUR FAVORITE of the truffles we tried and definitely what I would recommend you purchase – along with that Mayan Spice Bar. 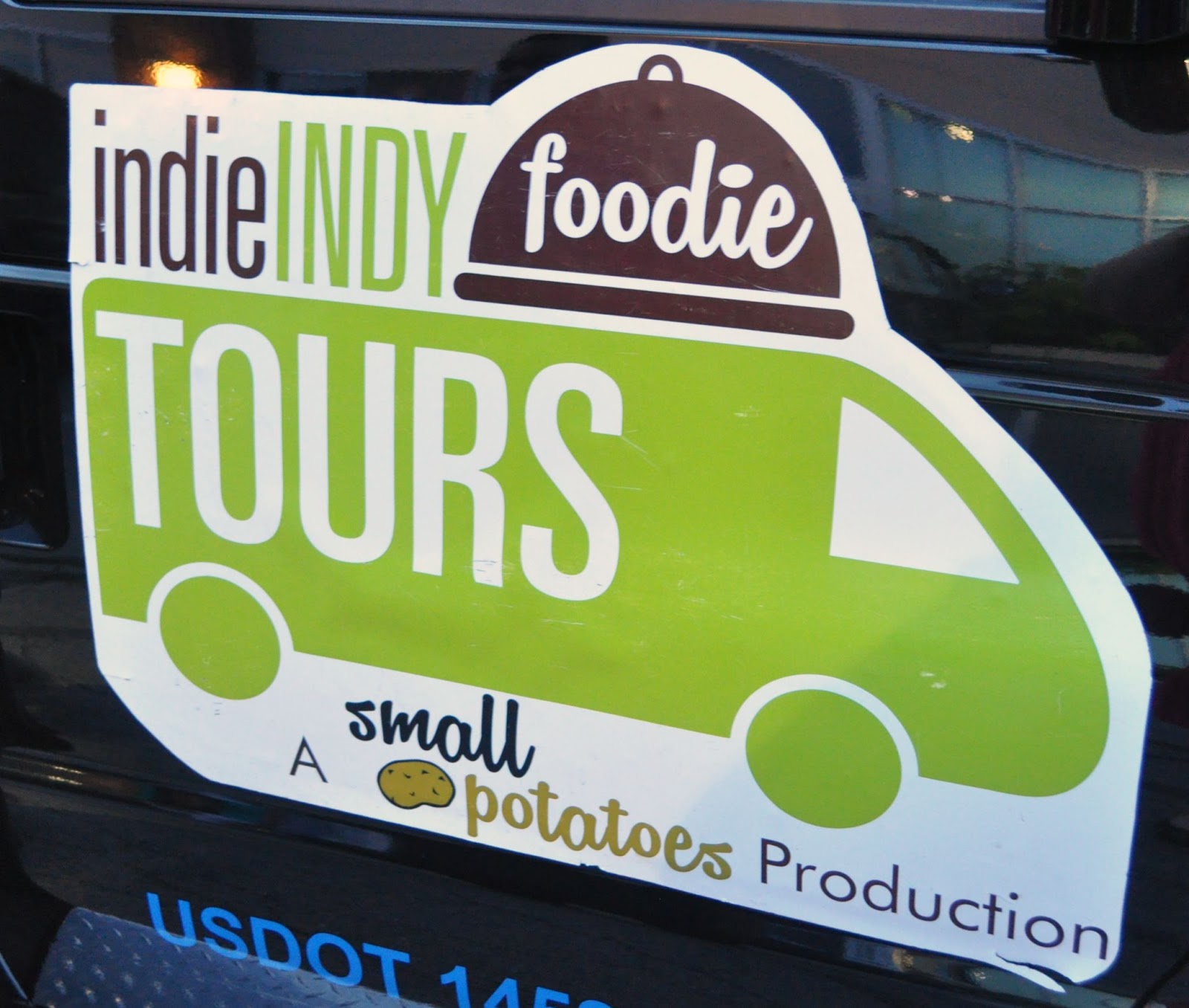 Thanks again to Indie Indy Foodie Tours for the food tour. Hamilton County sponsored the trip – but you can do something similar anytime you want by trying out these food tours. 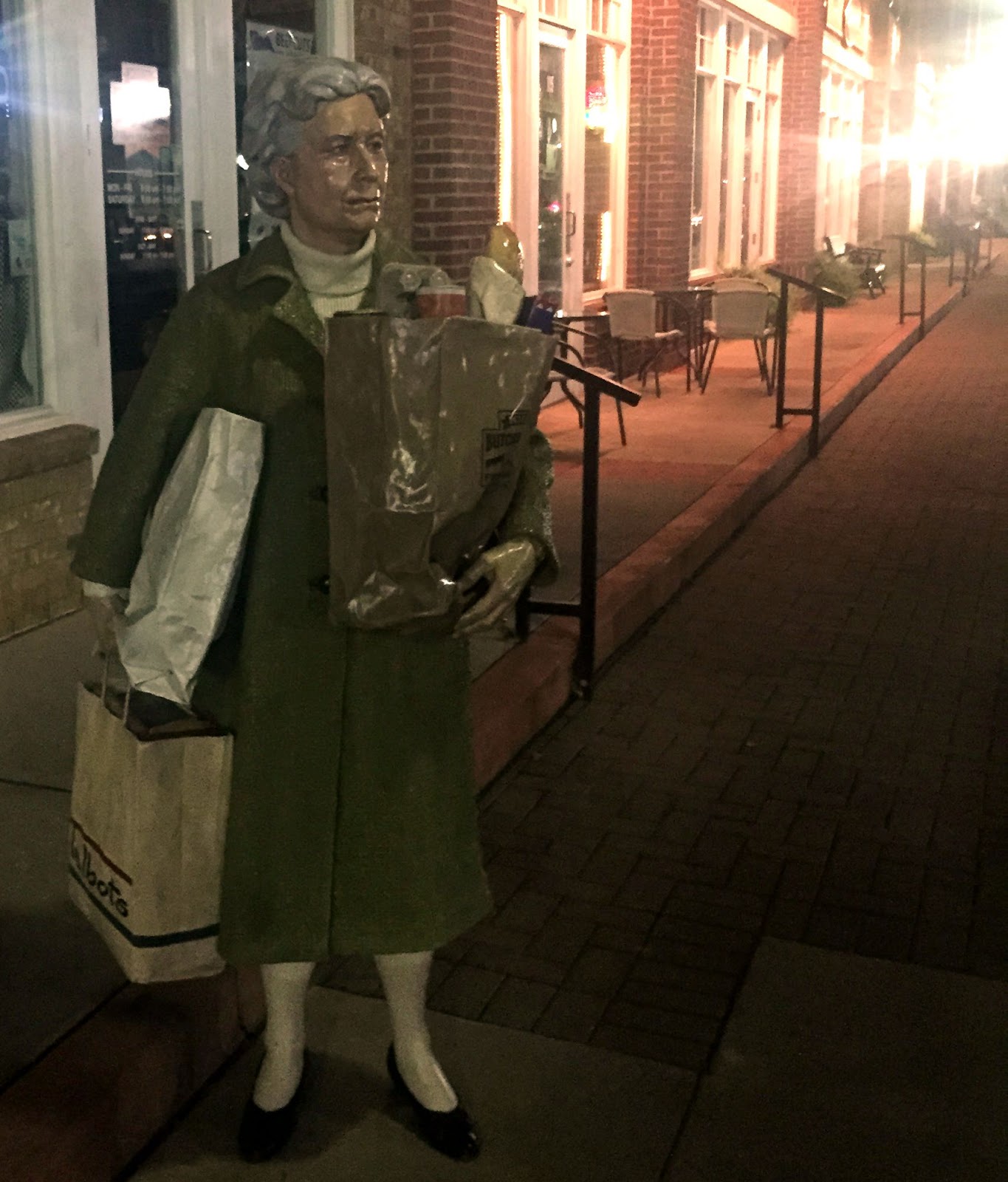 I can’t wait to go back and visit Carmel again – that is a beautiful neighborhood! They have these fun people throughout the neighborhood in a variety of poses. They’re very lifelike too. 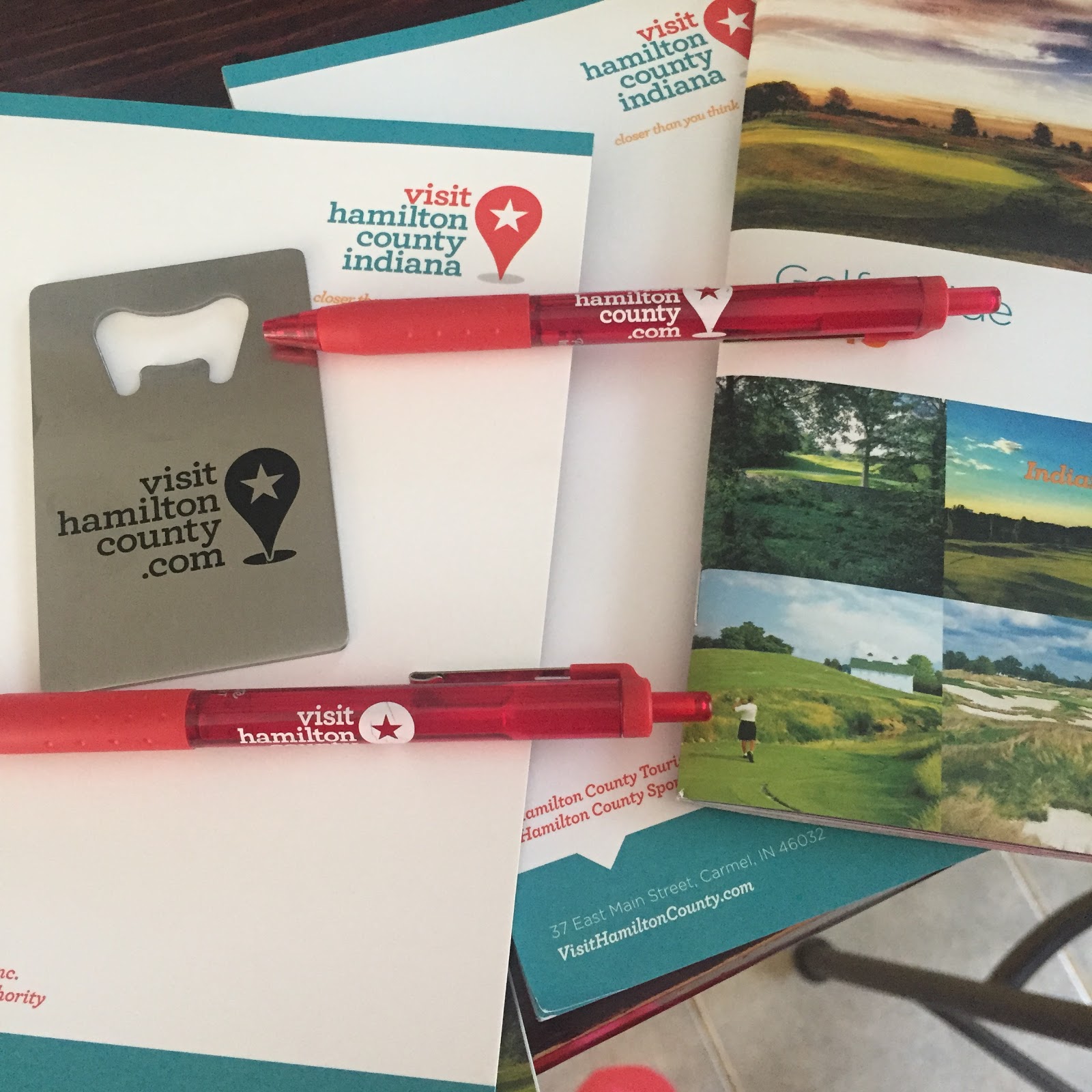 Thanks to Visit Hamilton County – they planned a great trip! We had a blast and we barely even scratched the surface of all there is to do in the area. I have another post coming with more! 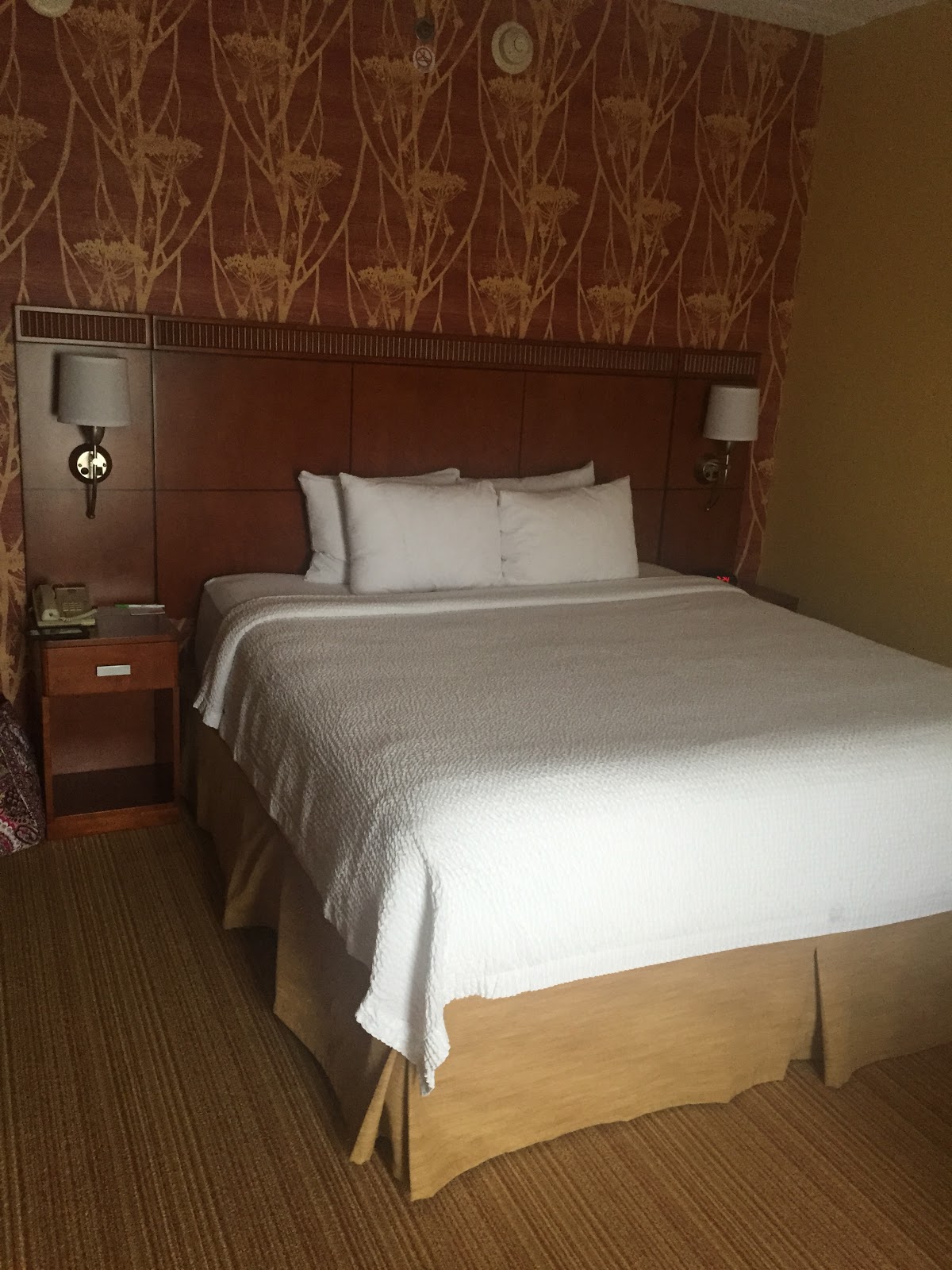 Thanks also to the Courtyard by Marriot in Carmel for our accommodations. It was a great night’s sleep!

I also want to say that I had the pleasure of making new friends – if you’re a wine lover – be sure to check out my friend Howard Hewitt – he and his companion were super-fun to hang out with!