Subscribe
I’ve reviewed HUNDREDS of restaurants in Cincinnati and people are always asking me – What is the best restaurant in Cincinnati? It’s just an impossible question to answer! It depends on my mood, what type of food I want to eat, how much money I want to spend, etc. But if you ask me what are the best BITES of food? That I have an opinion on! 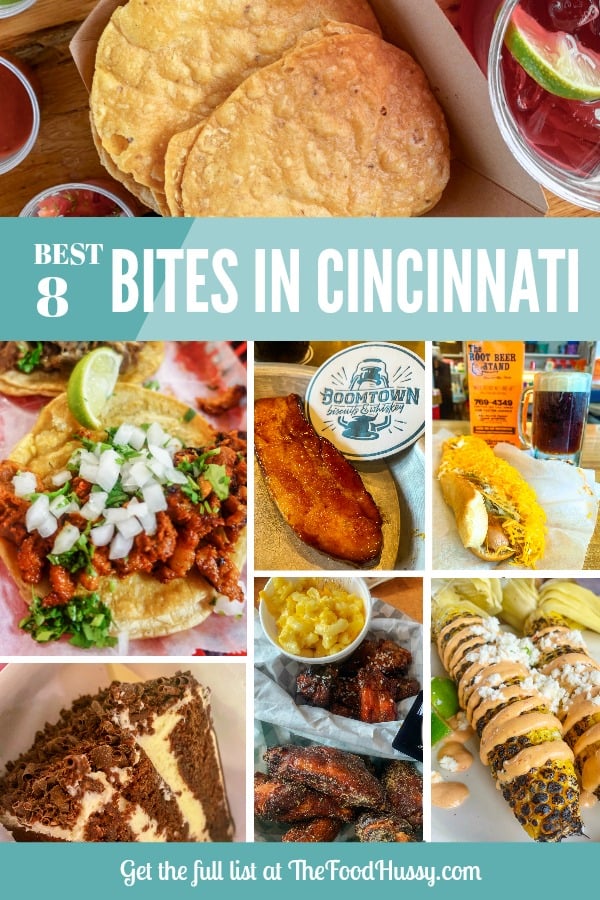 Recently a high school buddy came to visit and said he wanted to go to all my favorite places – he wanted to eat all this food he’s seen me share over the years. And I said – do you REALLY want to do it right? Yes please.

So we embarked on what can only be referred to as the EPIC FOOD TOUR OF CINCINNATI!

I decided we were going to have the best BITES of food – no whole meals here. This wasn’t about fancy food – it was about FUN restaurants in Cincinnati that I love and that I think everybody should try at some time in the near future. So come along for our EPIC FOOD TOUR OF CINCINNATI! (This is all in order – it was a HELLA DAY!) 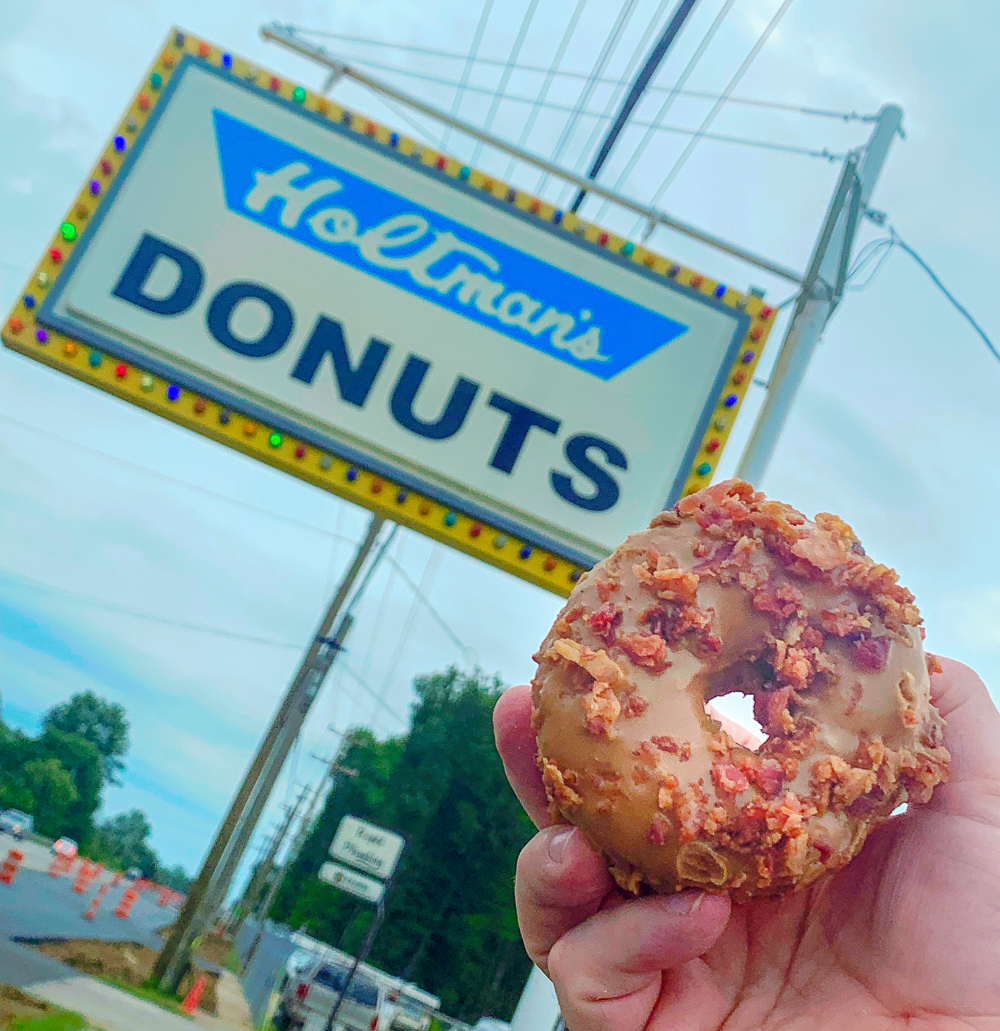 This is right by my house (and the OG of the locations that still exist) and is the best donut in Cincinnati. Noah doubted me – but he went with my reco of the Maple Bacon Donut and he was not disappointed. The maple frosting isn’t overly sweet and the bacon is meaty and not crispy – so you can still taste it. Delicious! 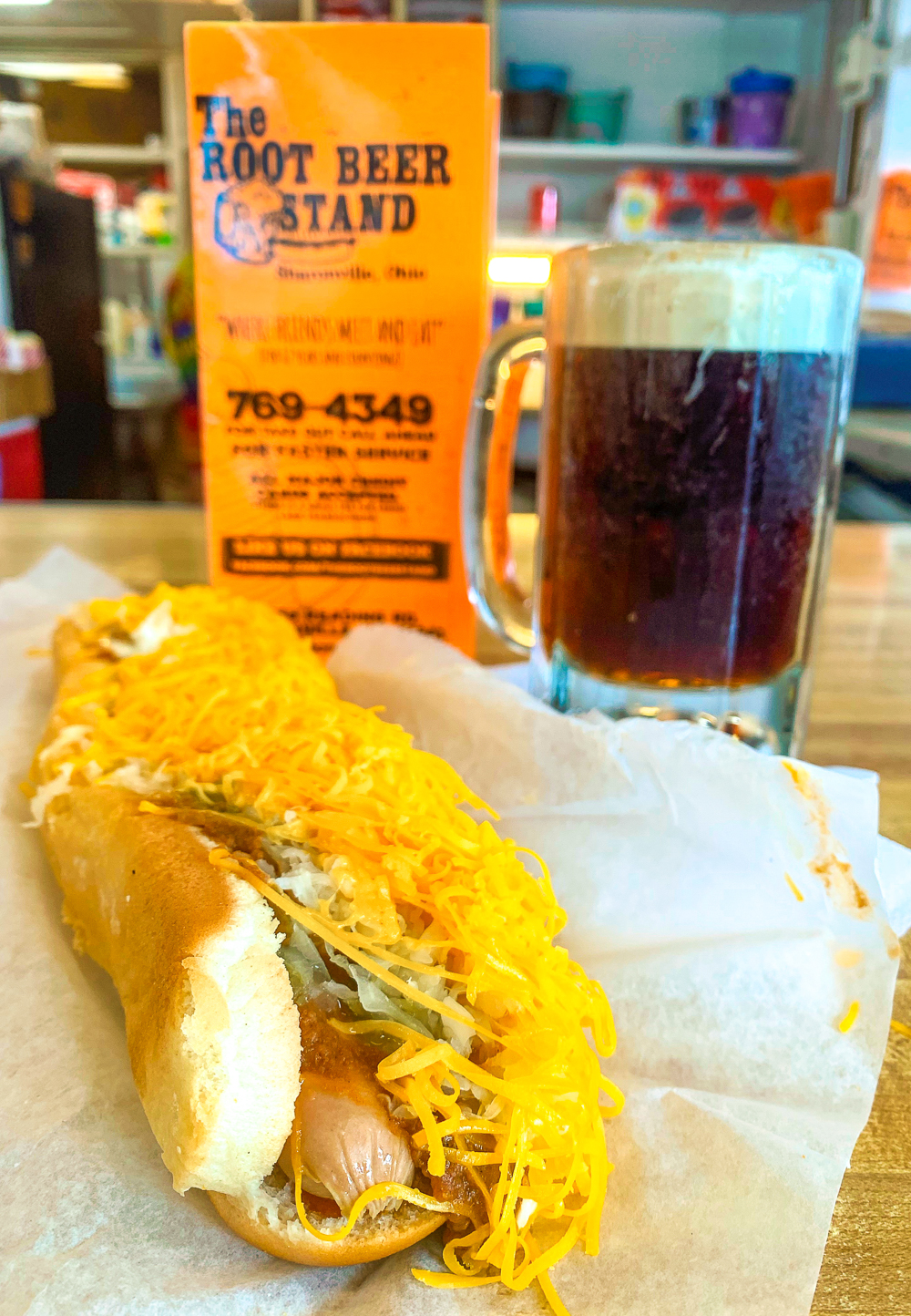 
Unfortunately for anyone reading this today – it’s closed for the season (mid-September). But put it on your Cincinnati Bucket List! They have homemade root beer served in frosty mugs and my favorite bite is the Timmy Dog. It has EVERYTHING on it!! The Timmy Dog is a foot-long hot dog loaded with chili, onions, hot sauce, cole slaw, mustard, ketchup, relish, cheese and sauerkraut. 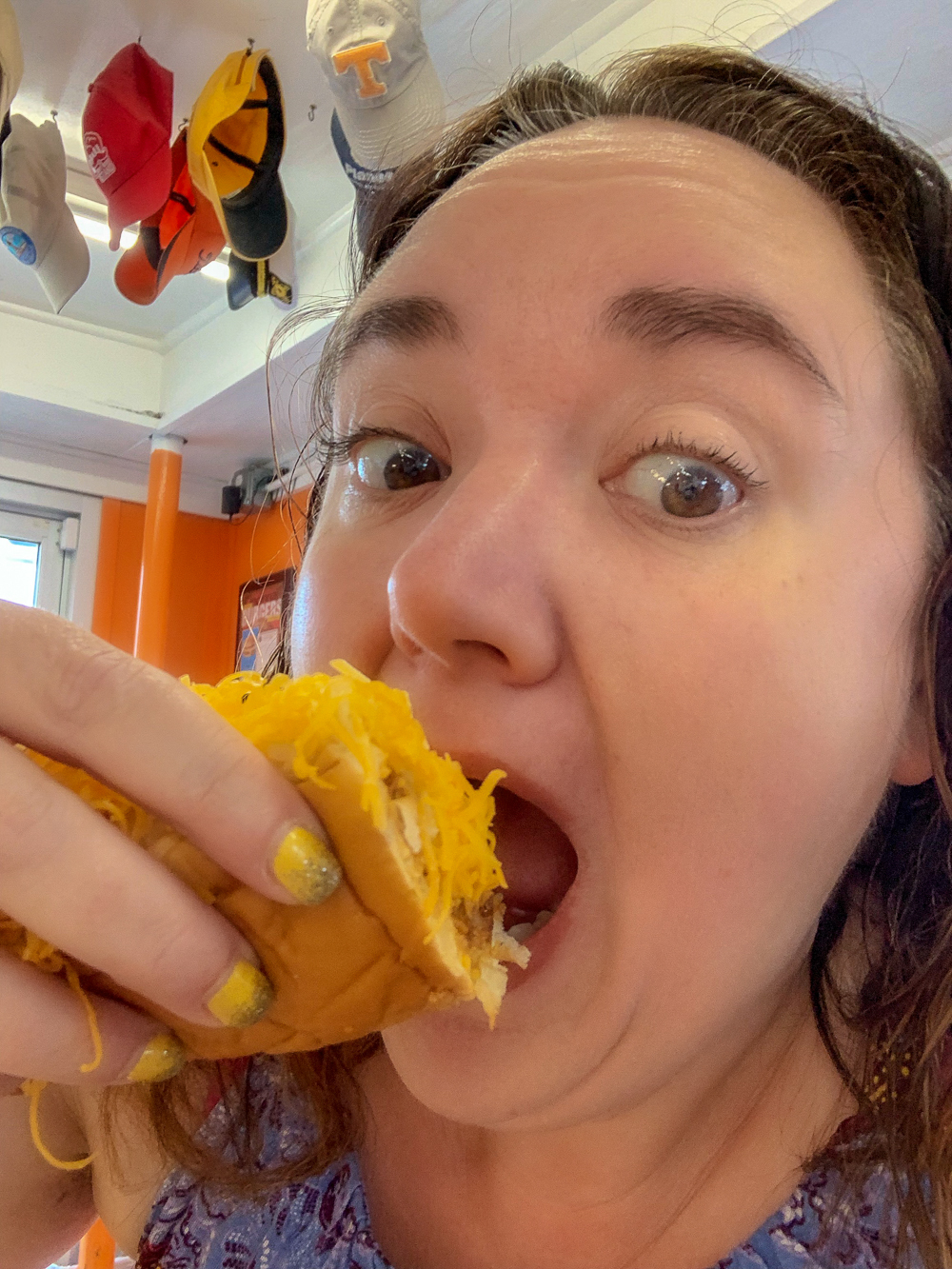 I love me a Timmy Dog! It has EVERYTHING on it and it is delicious! If you haven’t been to The Root Beer Stand – it’s a must-try spot in Cincinnati! 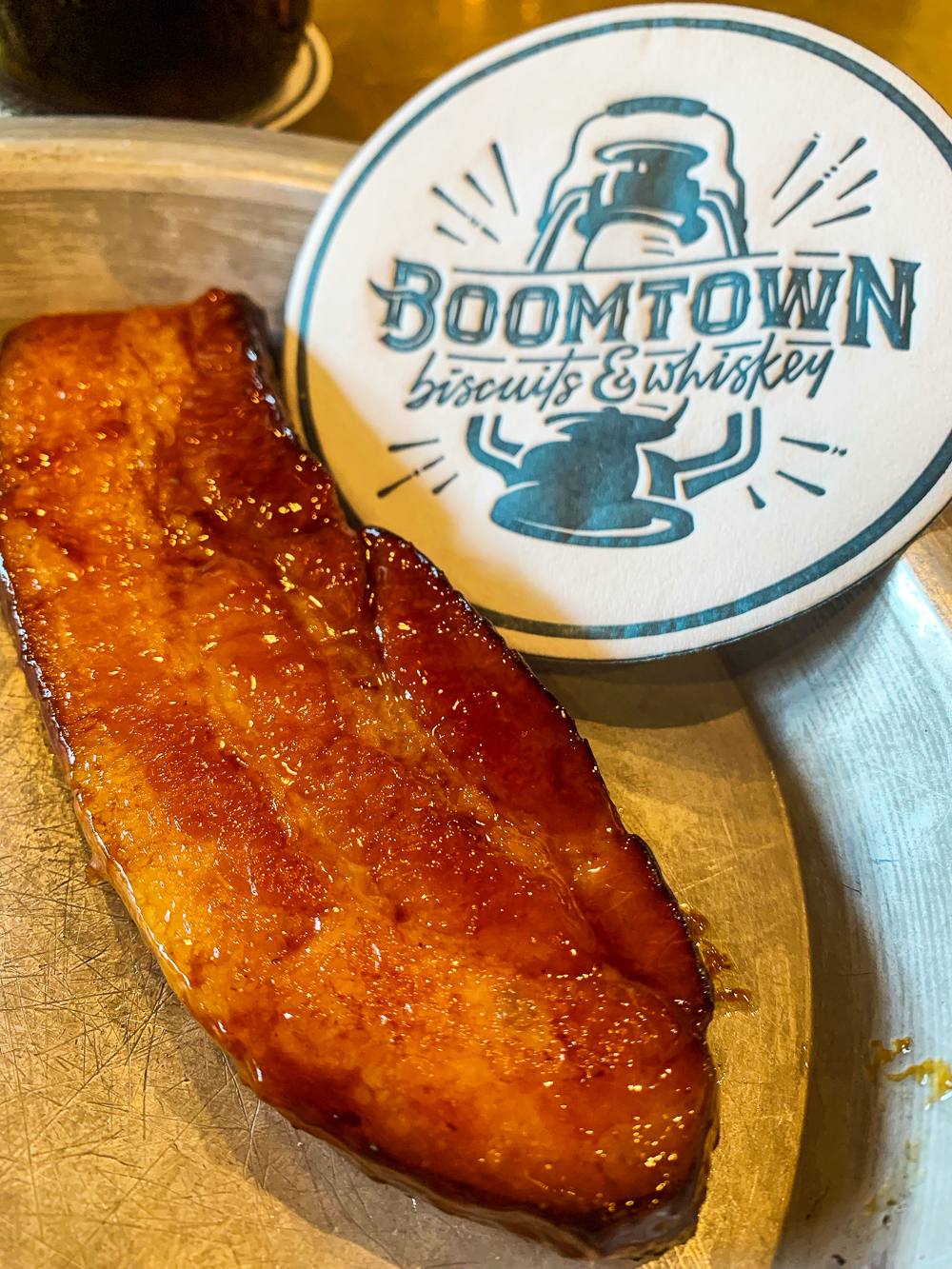 Yeah – that’s not a biscuit in the picture – it’s a HUNK of pork belly. And it’s worth every penny of the $4 price tag. All of their food is good – but that pork belly is – in my opinion – the single best bite of food in the city of Cincinnati. My friend agreed – it was his favorite of the day!!! 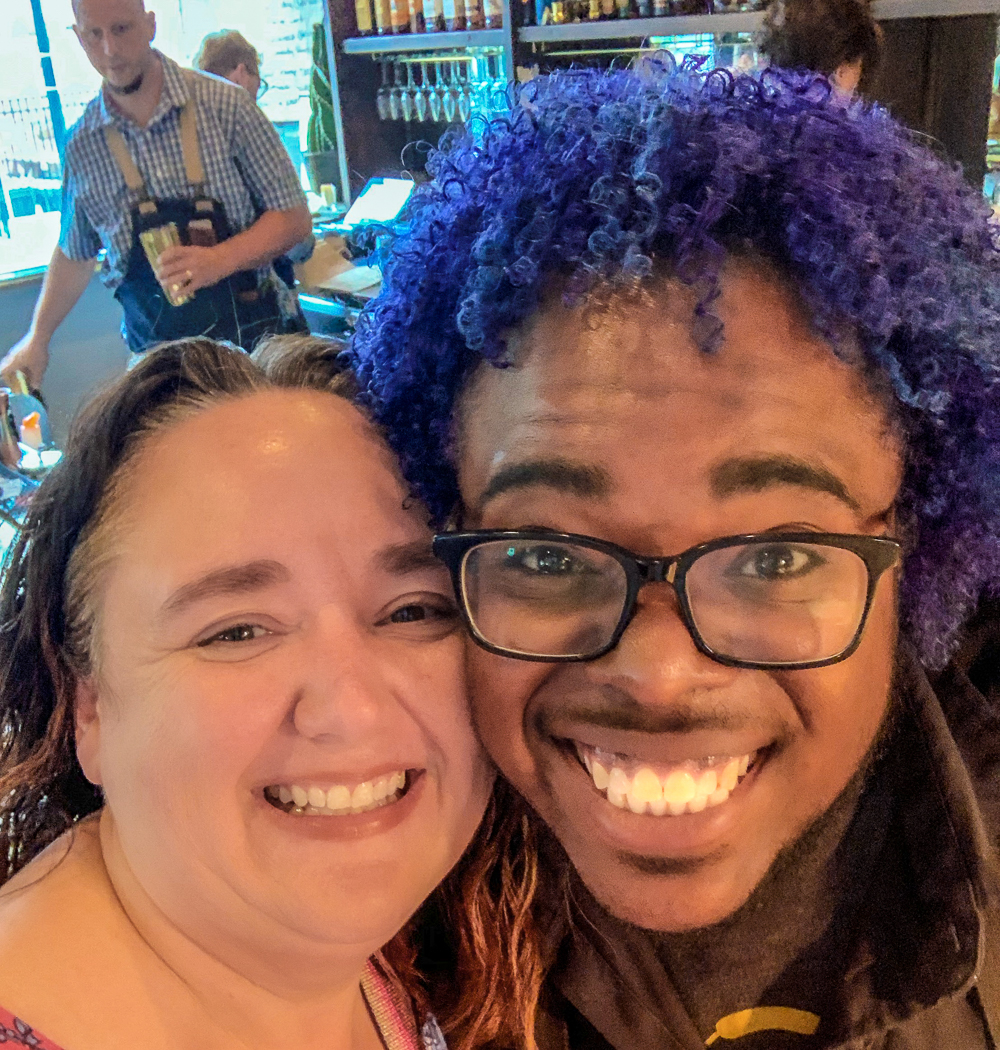 Their chef is Christian Gill and he’s amazing. On our first meeting – we found out we are birthday buddies and have been great buds ever since! He’s also friends with Guy Fieri – yeah – seriously! He’s been on Food Network shows more than a couple of times – Boomtown is that good.


Chef Christian also gave me a taste of the gravy of the day – that was a Cincinnati chili stye gravy – and wowza – it was SO GOOD!!! I ate every drop! 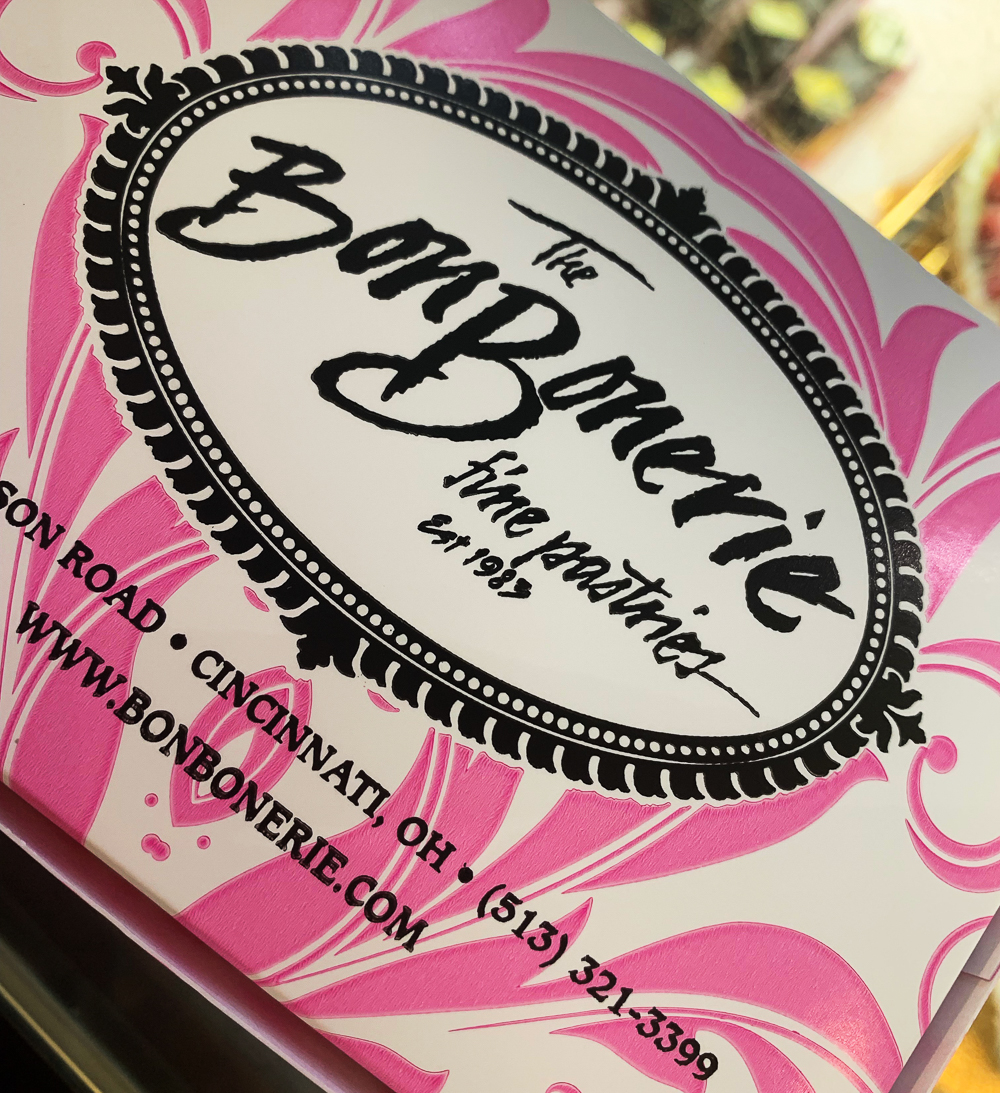 No visit to Cincinnati is complete without a bite of Opera Cream Cake! The Bonbonerie is a quaint bakery and tea shop that has delicious lunch service (love the quiche) and a coffee shop/bakery next door. They have all sorts of delicious treats you can take home. 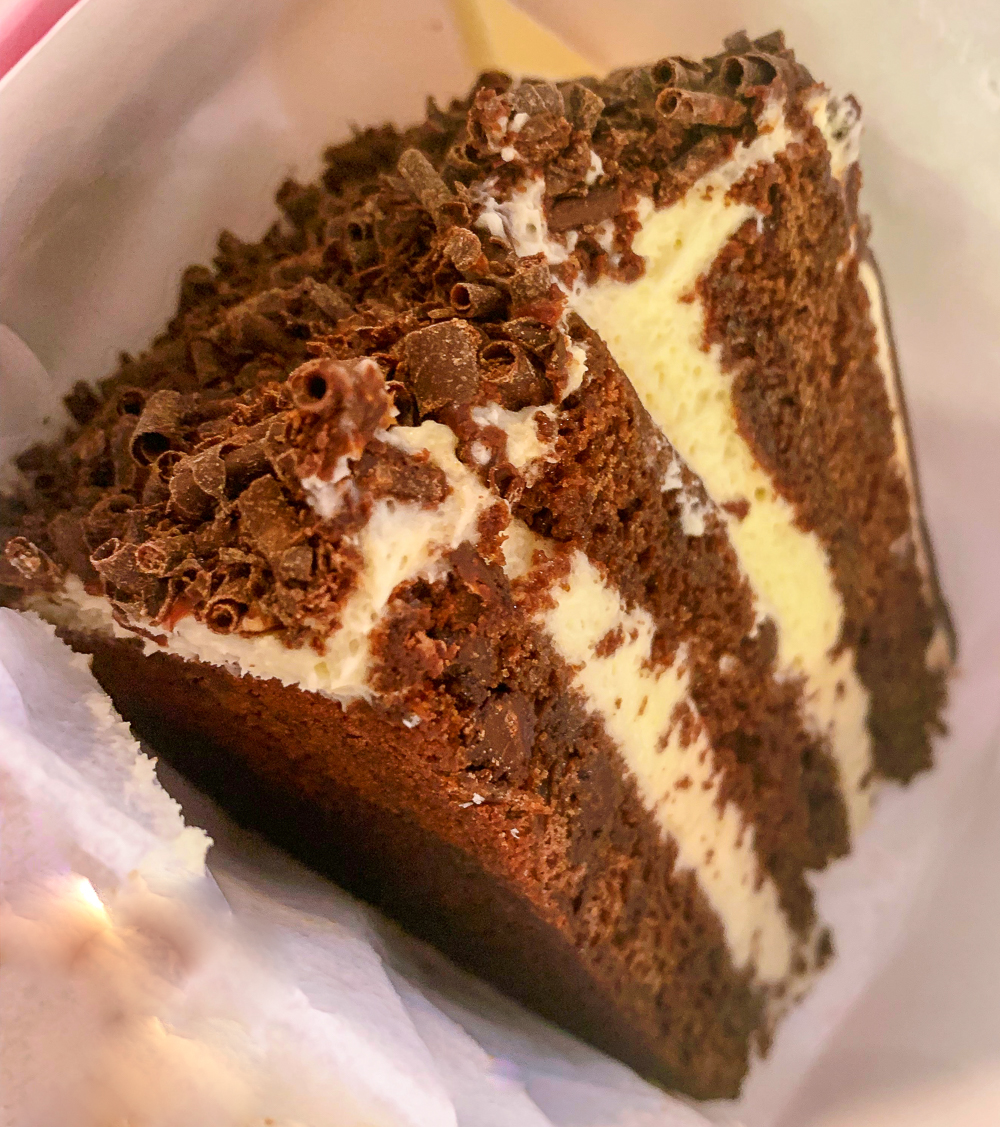 But the one item that’s a must-have is the Opera Cream Cake. It’s a chocolate cake but not actually too sweet or too chocolatey. The luscious and light cream filling is the star. Then the edges have chocolate shavings and it’s all delicious. If you live in Cincinnati – you have to have it at least once a year! 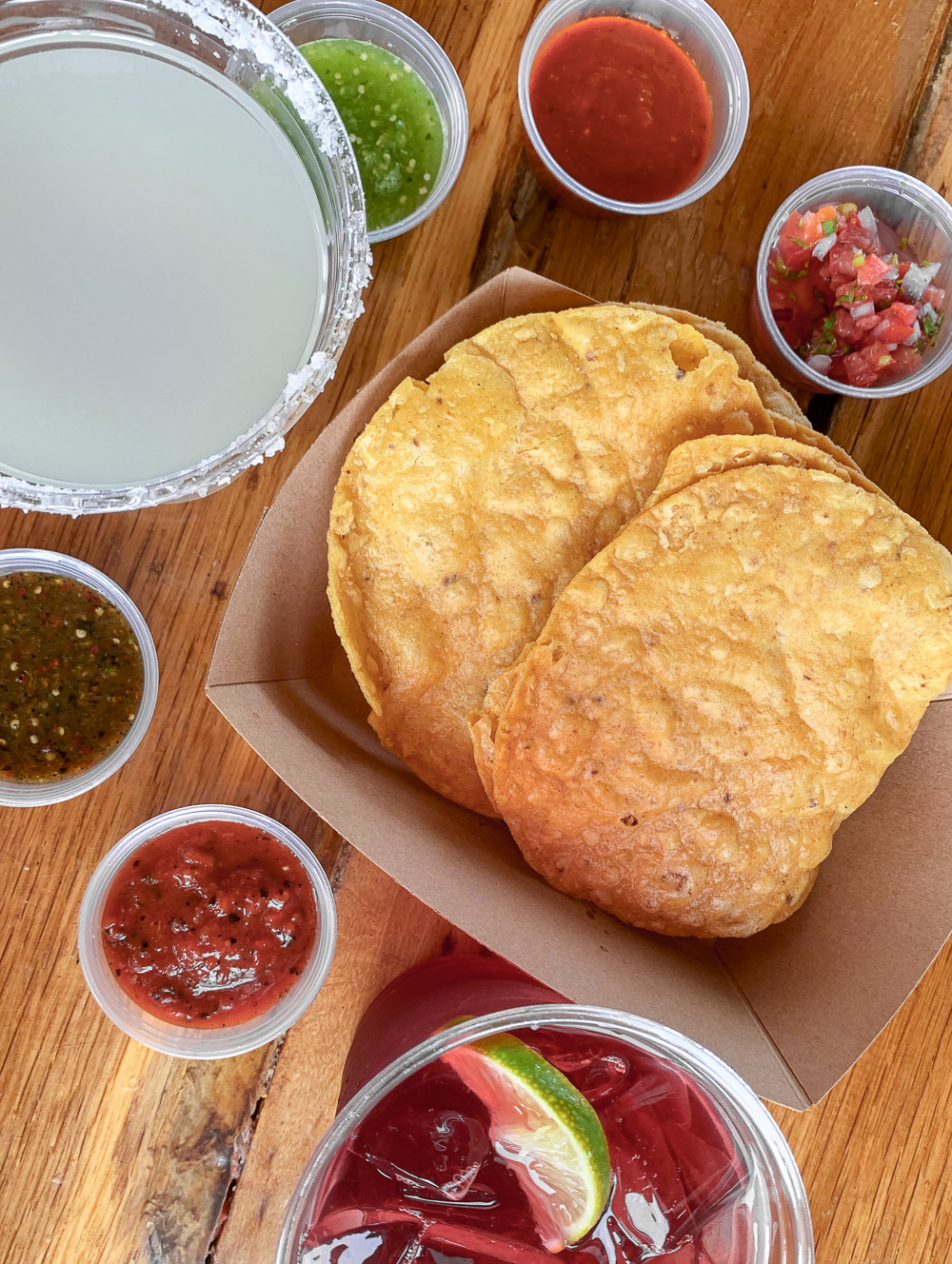 This is why I say – we went for the best BITES – we had a lot of eating in our planned itinerary! And Mazunte is one place that is on nearly everybody’s list. We tried their chips, salsa and drinks of course – but our favorite bite might surprise you… 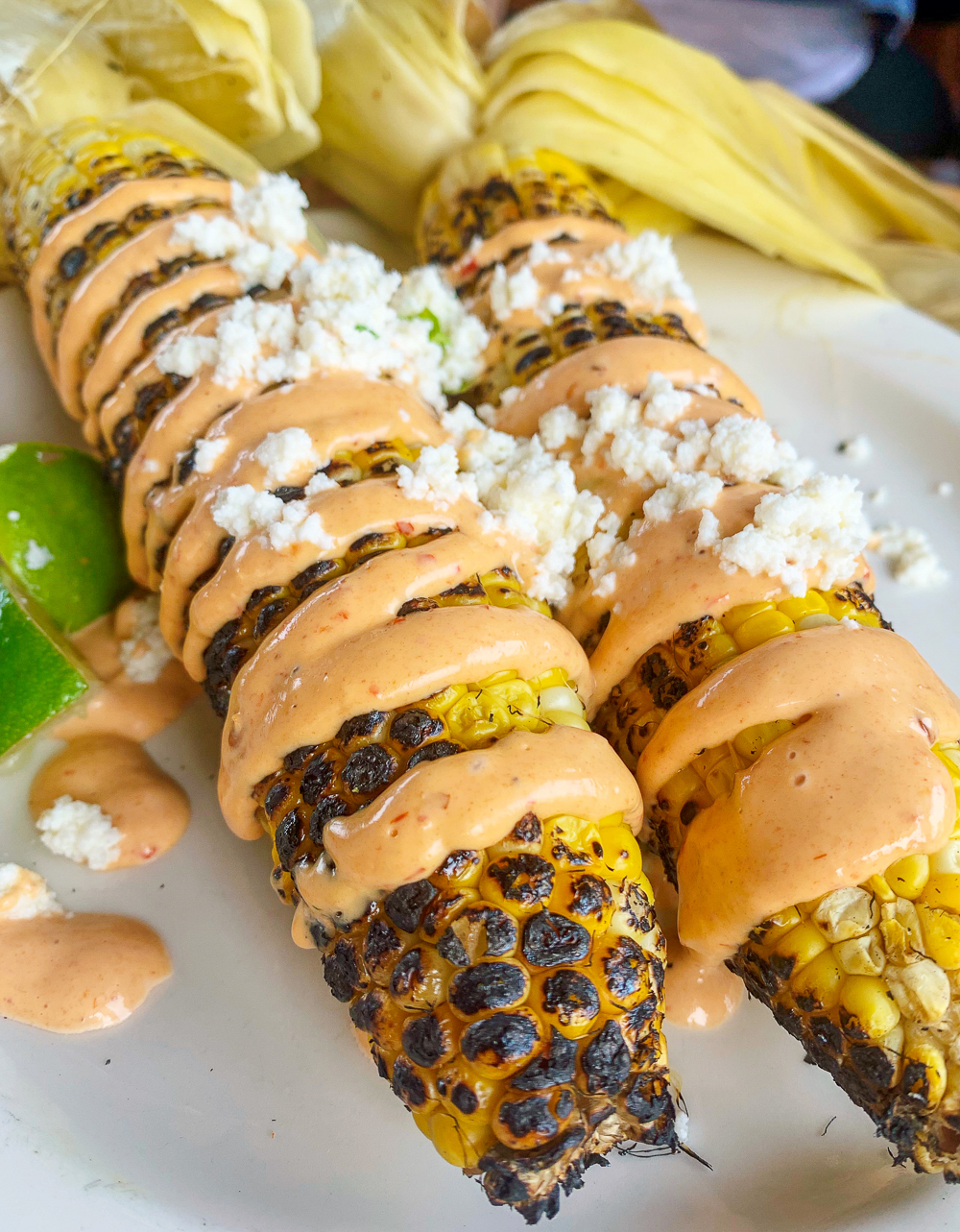 The Elote – or Mexican corn! I actually don’t think Mazunte has the best tacos in the city. I like them and I won’t turn them down – but they’re not my favorite! The elote though is something you can’t find everywhere and I love it. Being from Iowa – corn is the way to my heart! 😉 Elote is grilled corn on the cob that is covered with a spicy mayo and crumble cheese. Yum!!! 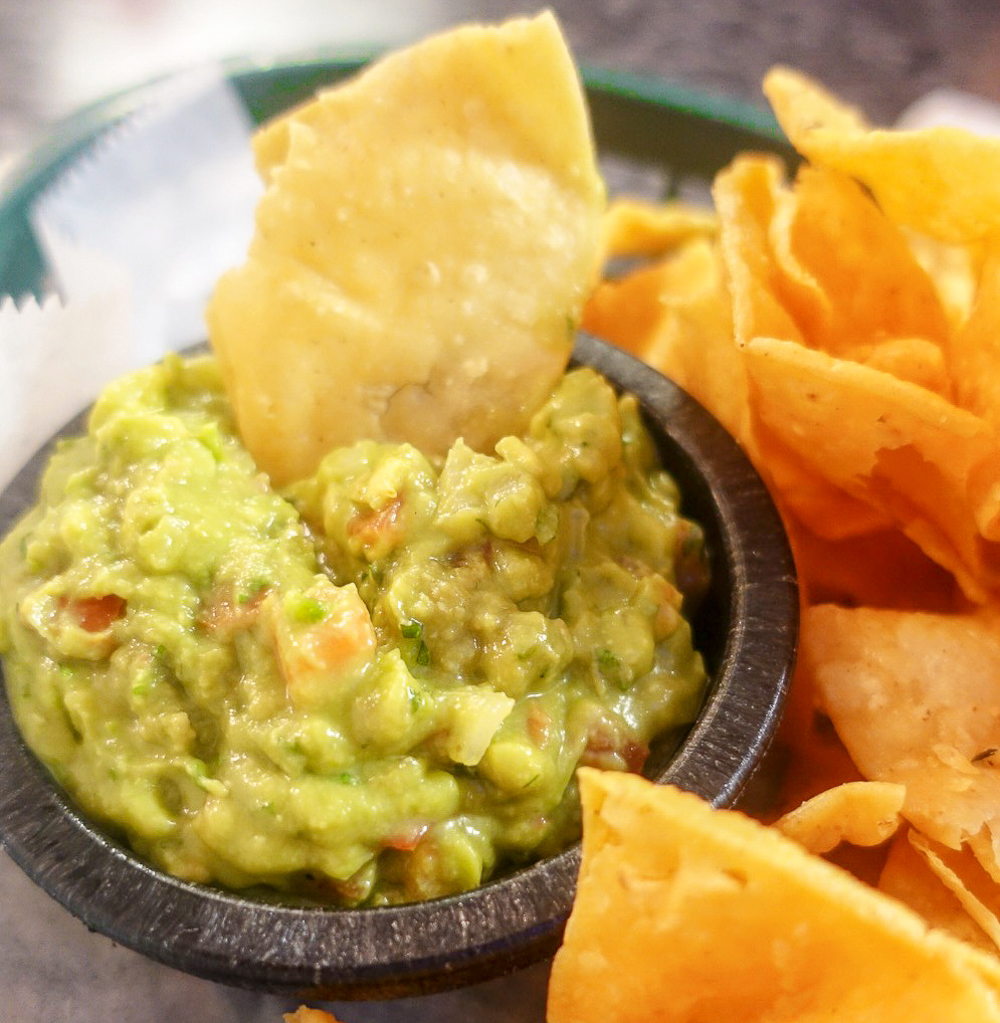 Now THIS is the place for tacos! They are my absolute favorite for the Al Pastor taco and I love their guacamole! It’s a little place on Monmouth in Newport – but they’ve remodeled so the bar in front is fancier. If the four tables you see when you walk in are full – there’s plenty more tables in the back and a little grocery store! 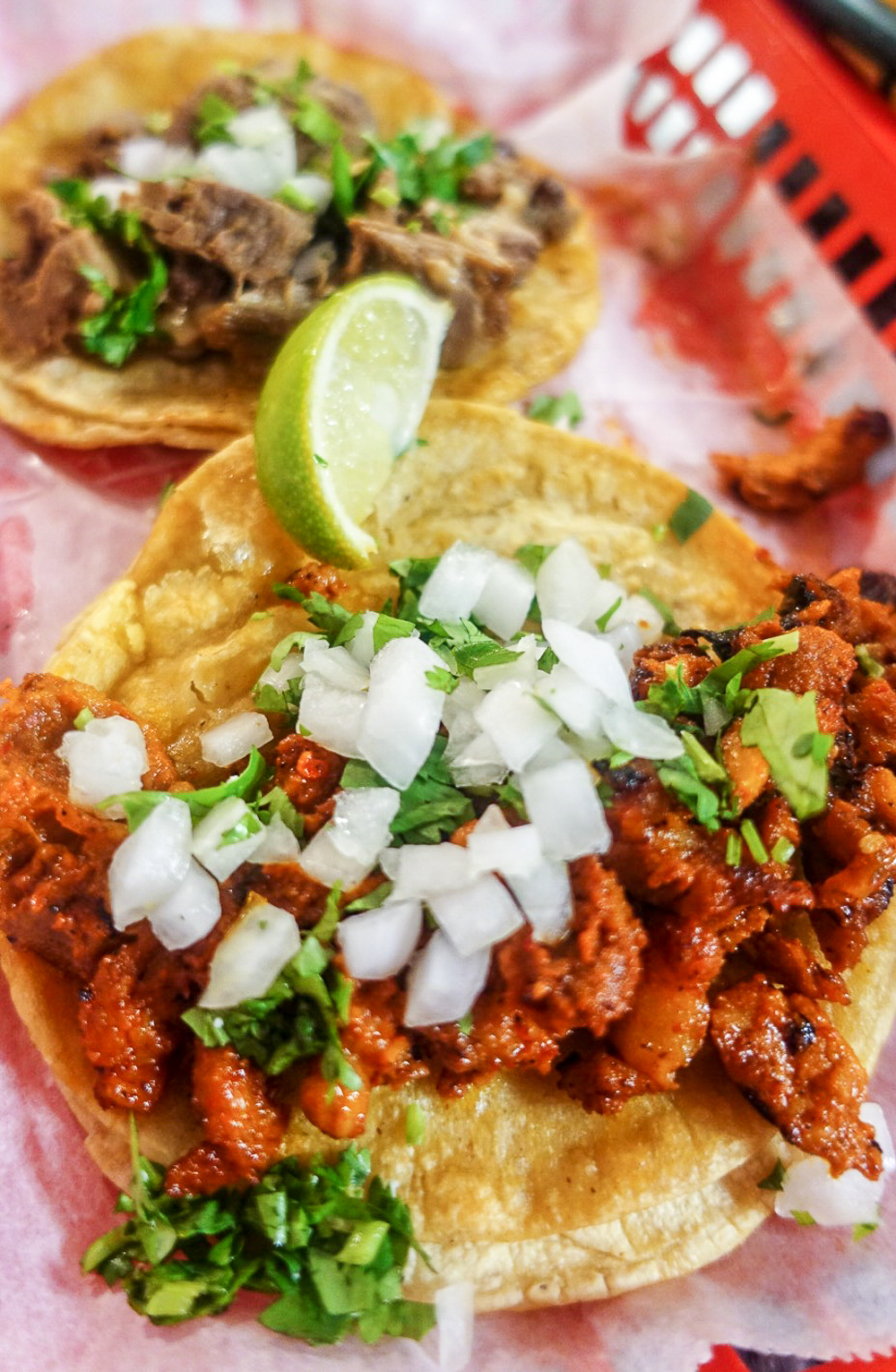 For me though – it’s all about the tacos. The best Al Pastor taco in the city of Cincinnati!!! It’s saucy and has pineapple and is just plain perfect! You can also get goat, tongue, brains, etc… I like the Al Pastor and the Vegetarian (it’s refried beans and all the American toppings like cheese, lettuce, tomatoes and sour cream). 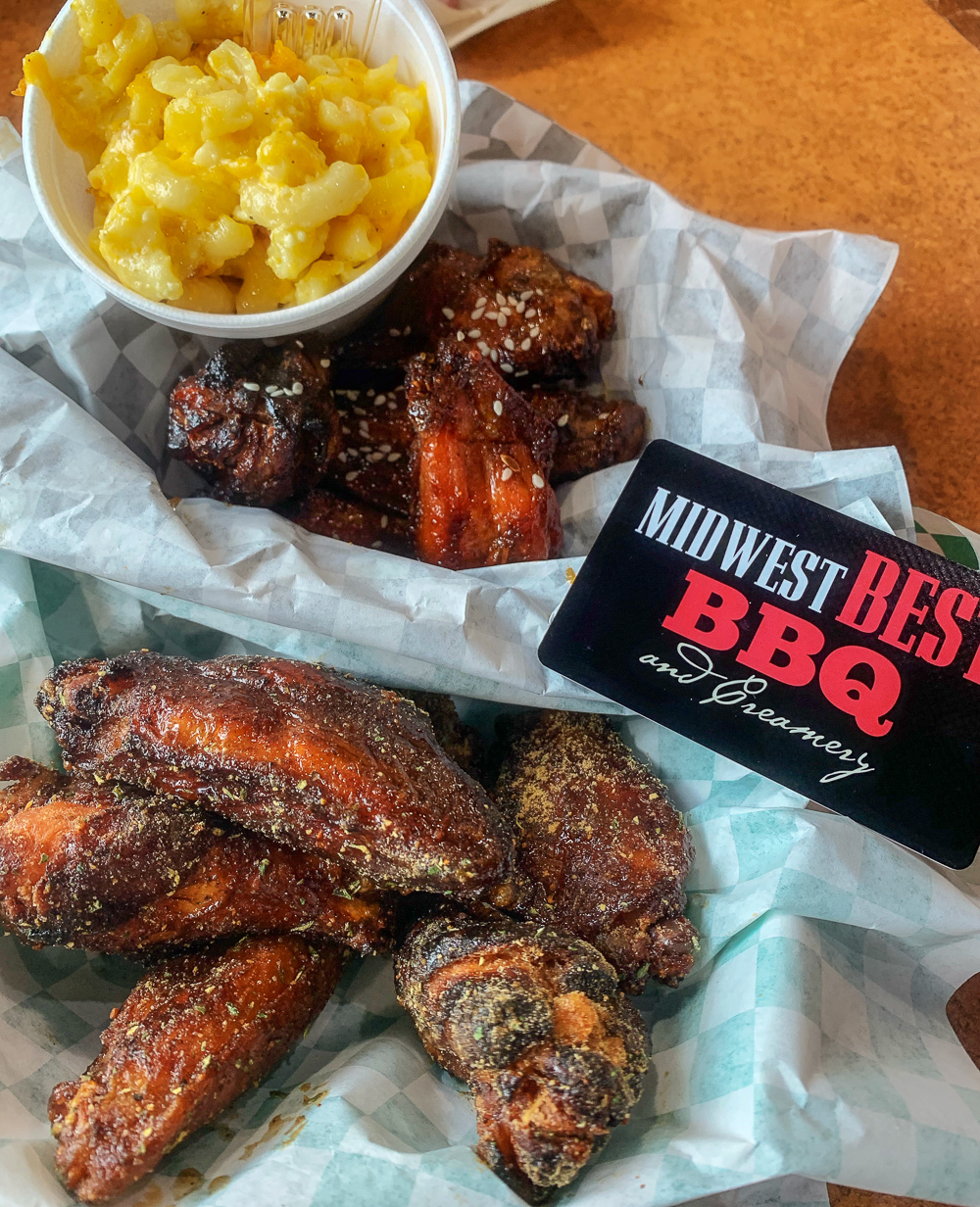 I’ll be honest – at this point – we needed a nap and a walk and more than one bathroom break. We were going for bites and sharable items – but still – we were hurting! So we zoomed back to my house – retired to our separate quarters – and napped like our lives depended on it. Took the dogs for a walk and then were back at it!


Our last savory stop was Midwest Best BBQ in Loveland. I fell in love with them when they were off the bike trail in a tiny little corner location. Now they have a big restaurant with a parking lot!! Shockingly – I hadn’t been to this location yet – but I remembered those G-Funk wings and had to take my friend there. They are dry rubbed and are my favorite! They were still as tasty as I remembered. 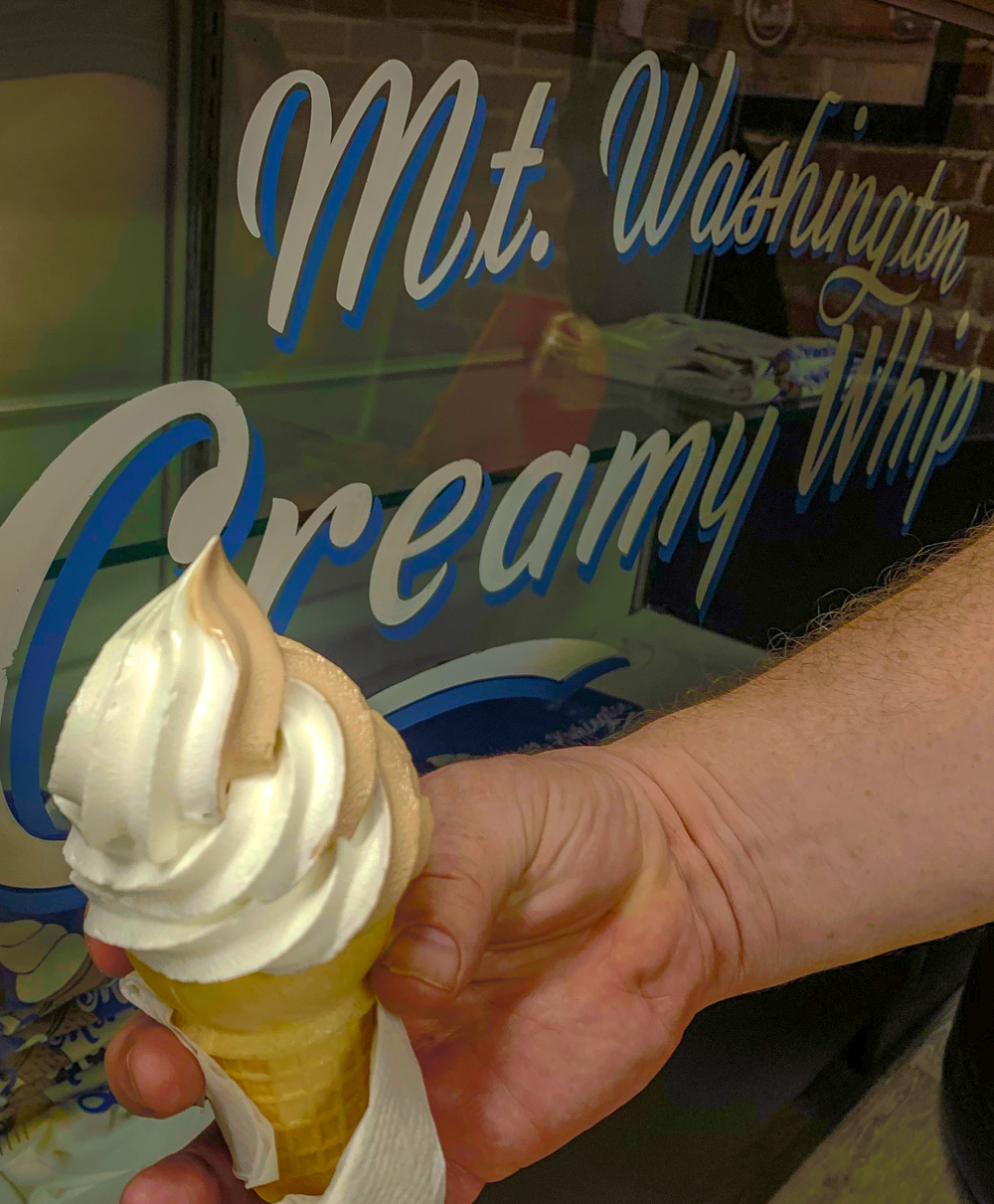 
After our day of eating – we went for another walk as we headed downtown to the Queen City is Haunted Tour by American Legacy (thanks for the free tickets guys! love ya!!). This was a fun tour and gave us a much needed walk after all that food. We heard some fun and slightly spooky stories about Cincinnati.


We got in the car and were heading home and Noah said, “You know – I could eat that ice cream now.” So we hit the Google and sure enough – my favorite ice cream place was open for another 30 minutes! We put the Ford into overdrive and headed to Mt Washington Creamy Whip!


Now – I know – I didn’t take him to Graeters???? Well – he’d had Graeters before in a pint. And frankly – I love soft serve. The chocolate cone at Creamy Whip is MY favorite and that’s what this tour was about!!!


So we ended our day at Mt Washington Creamy Whip with a cone (he got a twist – I got chocolate). (Also – they’re now open THROUGH OCTOBER!!!) 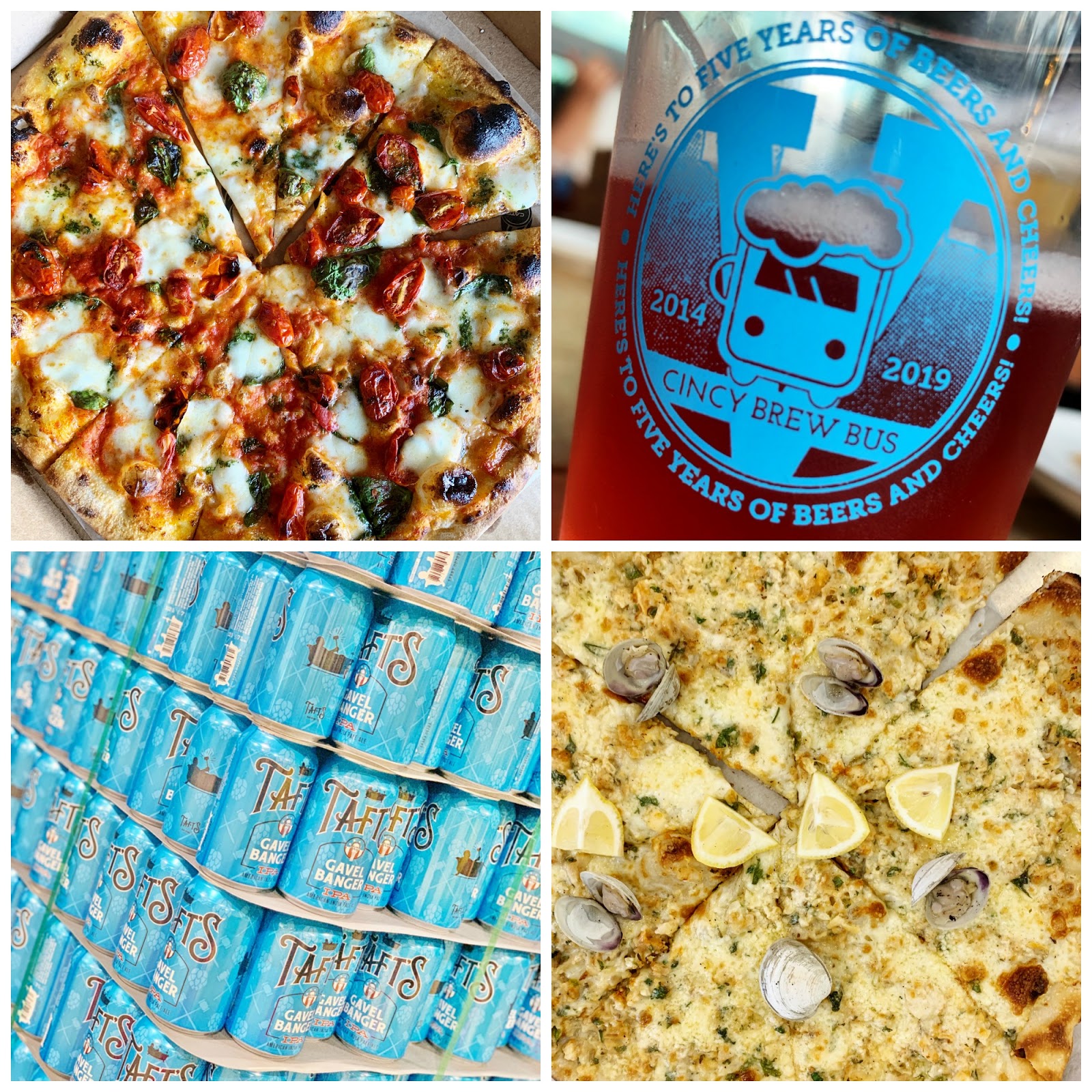 We still had Sunday!!! My buddy Mike at Cincy Brew Bus had told me about their brand new Pizza & Beer tour and offered me up a couple of seats and, well, who can turn down pizza and beer?!


So we spent four hours visiting three breweries with pizza and stuffing our faces a little more. I don’t know where it all went! (Yes I do – my behind!) We stopped at Little Miami, Mad Tree and Taft’s Brewpourium – great fun and great pizza! Little Miami was my favorite – mainly because it’s the closest to my house and is on the river!


What more food could there be left in the city to eat??? Well…there’s the final food item that you cannot miss in Cincinnati. When people ask – What food is Cincinnati known for? Of course – THE CHILI!!! 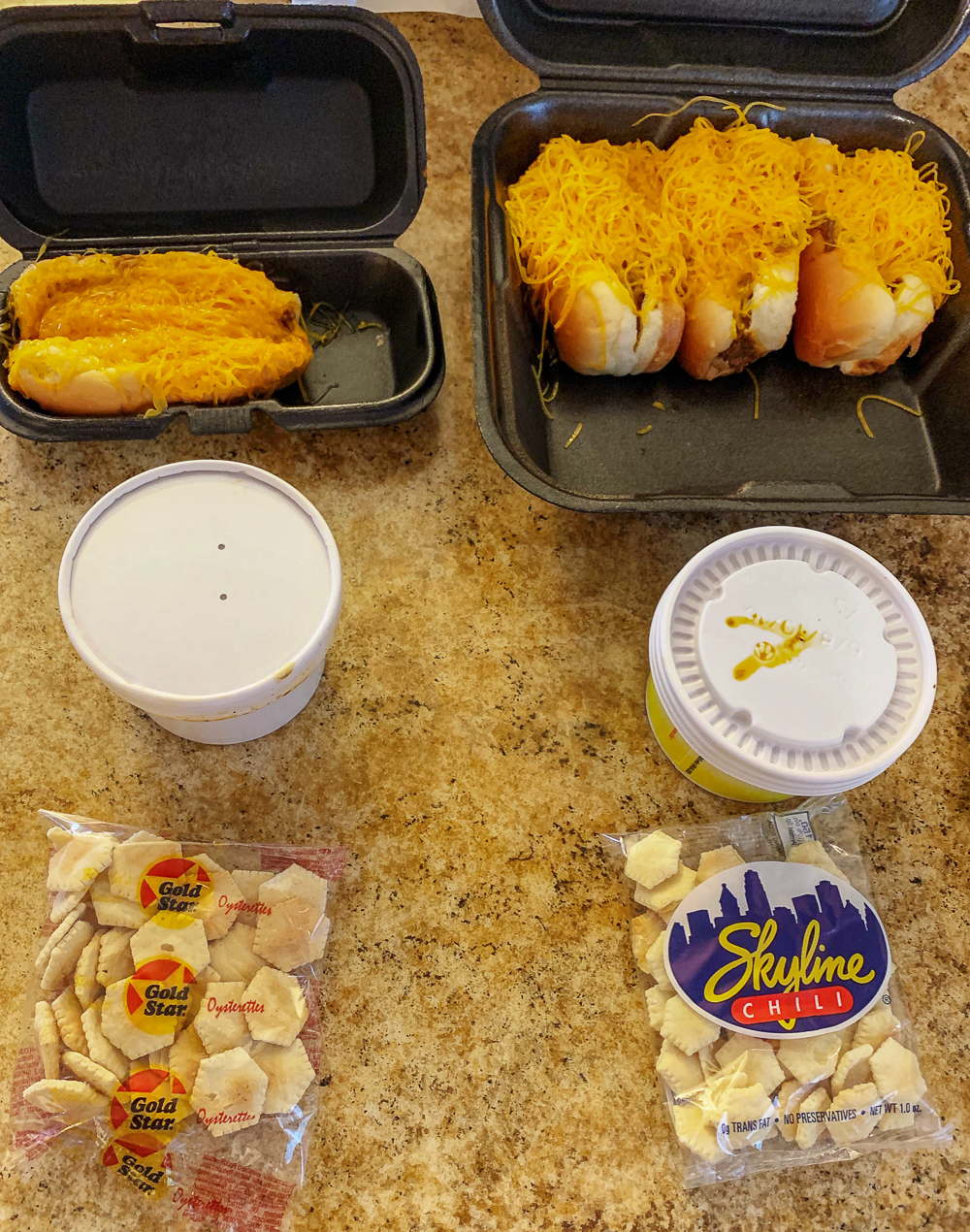 We decided we needed to do an official Gold Star vs. Skyline taste off! Luckily in Milford – they’re across the street from each other. We purchased loaded coneys, a cup of chili and crackers from each. Noah hid while I plated onto non-branded items. (The extra coneys were for my dogs. The selection of Skyline showed no preference on my part. They’re dogs. They don’t care.) 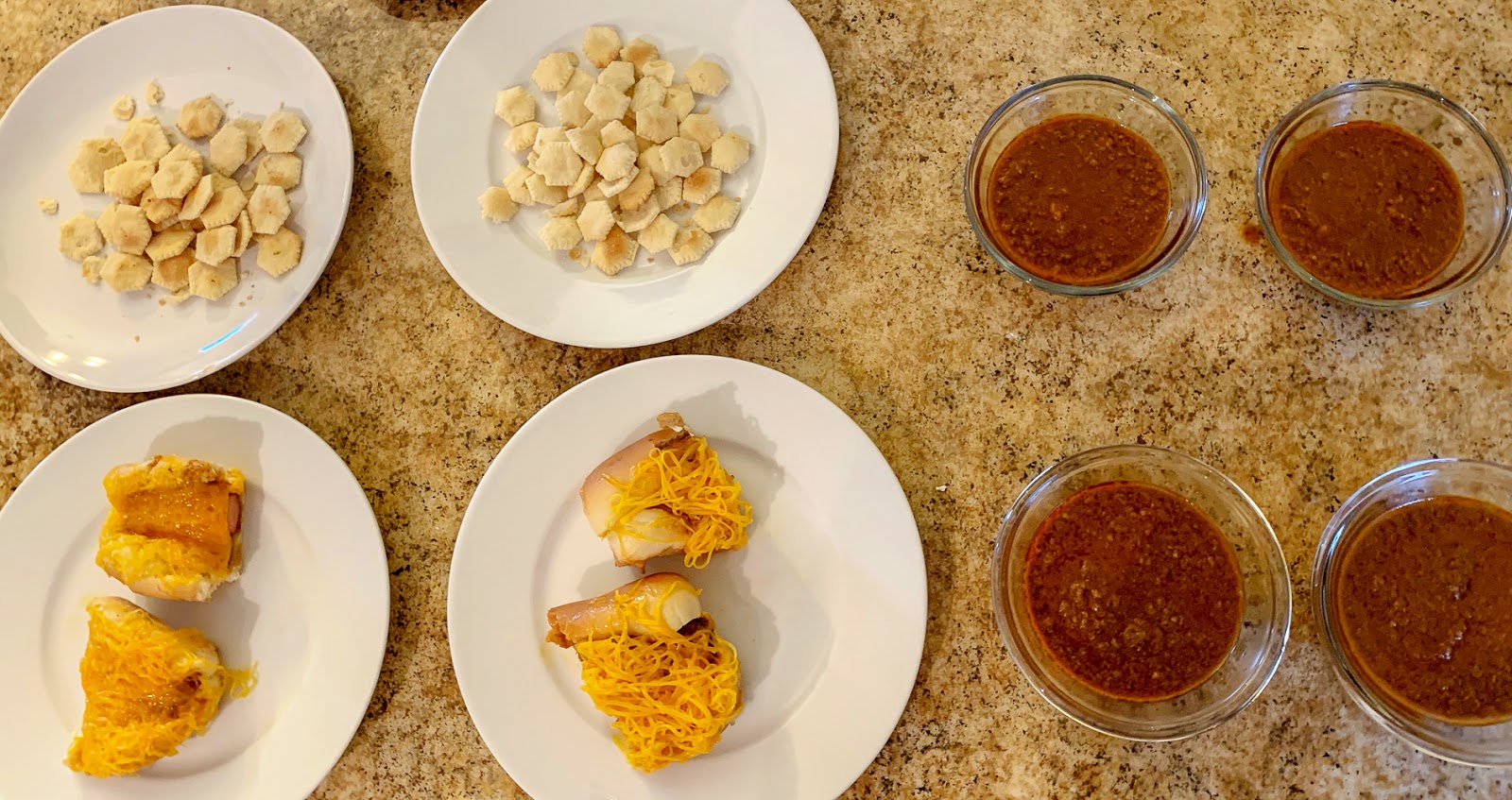 We each tasted all the items and the winnings were split!!

Cup of Chili: Hands down – Gold Star. It wasn’t even close. The meat in Skyline had a very strange texture and Gold Star had a ton more flavor and spice!


Coneys: Heather – Gold Star, Noah – Skyline. He felt that once you add everything to it – you couldn’t much tell a difference and I agreed. He liked the Skyline hot dog better and I preferred the Gold Star. Skyline actually makes their hot dogs specially to have little flavor – so that was interesting to us!


Yes – I chose Gold Star Chili across the board – which I wasn’t really surprised by. I was pretty shocked by the cup of chili taste test – it was WILD how different they were. And then on the coney – you could barely tell a difference!


I challenge anyone that is a loyalist to one or the other to try it themselves! It was fun! (I know more people are die hard Skyline Chili – so give it a whirl!) 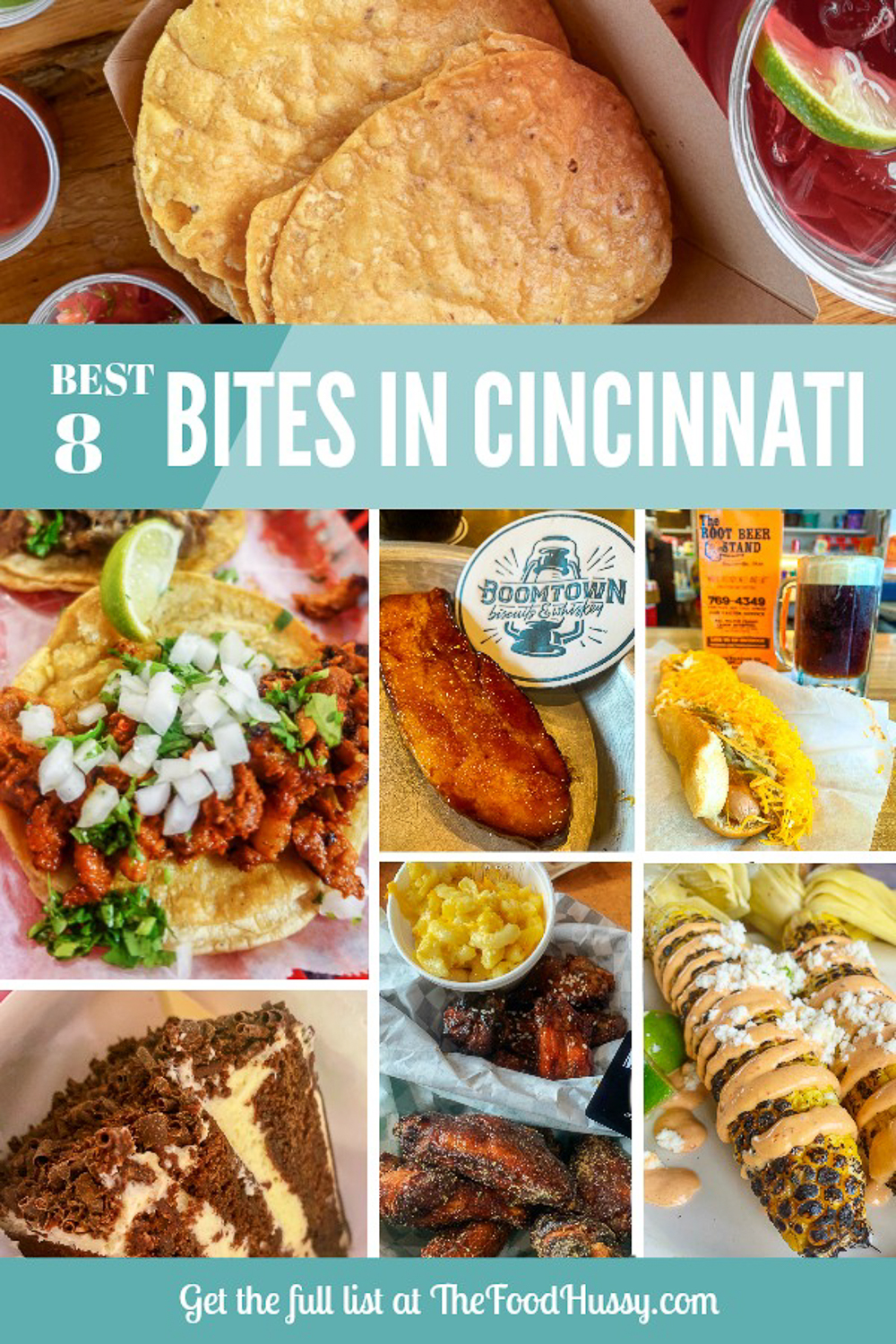 So ten pounds later – there you have it! The most Epic Food Tour of Cincinnati that I think has ever been done.


Can you believe we also ate at 50 West and Osaka Ramen House on Beechmont (really new and really delicious!)? I can’t believe the food intake!! It was a delicious way to tour Cincinnati and it was fun to have a friend that was up for the challenge. Most folks just want to go to one place and have dinner – and I have places for that too (Bite in Milford) – but this was really fun!


What are YOUR epic BITES of food that we missed???