This post is sponsored by Jarlsberg Swiss Cheese. All opinions are my own.
I have a love of Swiss cheese and Jarlsberg in particular. A couple of years back I made the Jarlsberg dip and even used leftovers to make a pasta dinner! This time, Jarlsberg asked me to combine their Swiss cheese with a Cincinnati favorite…Challenge Accepted! 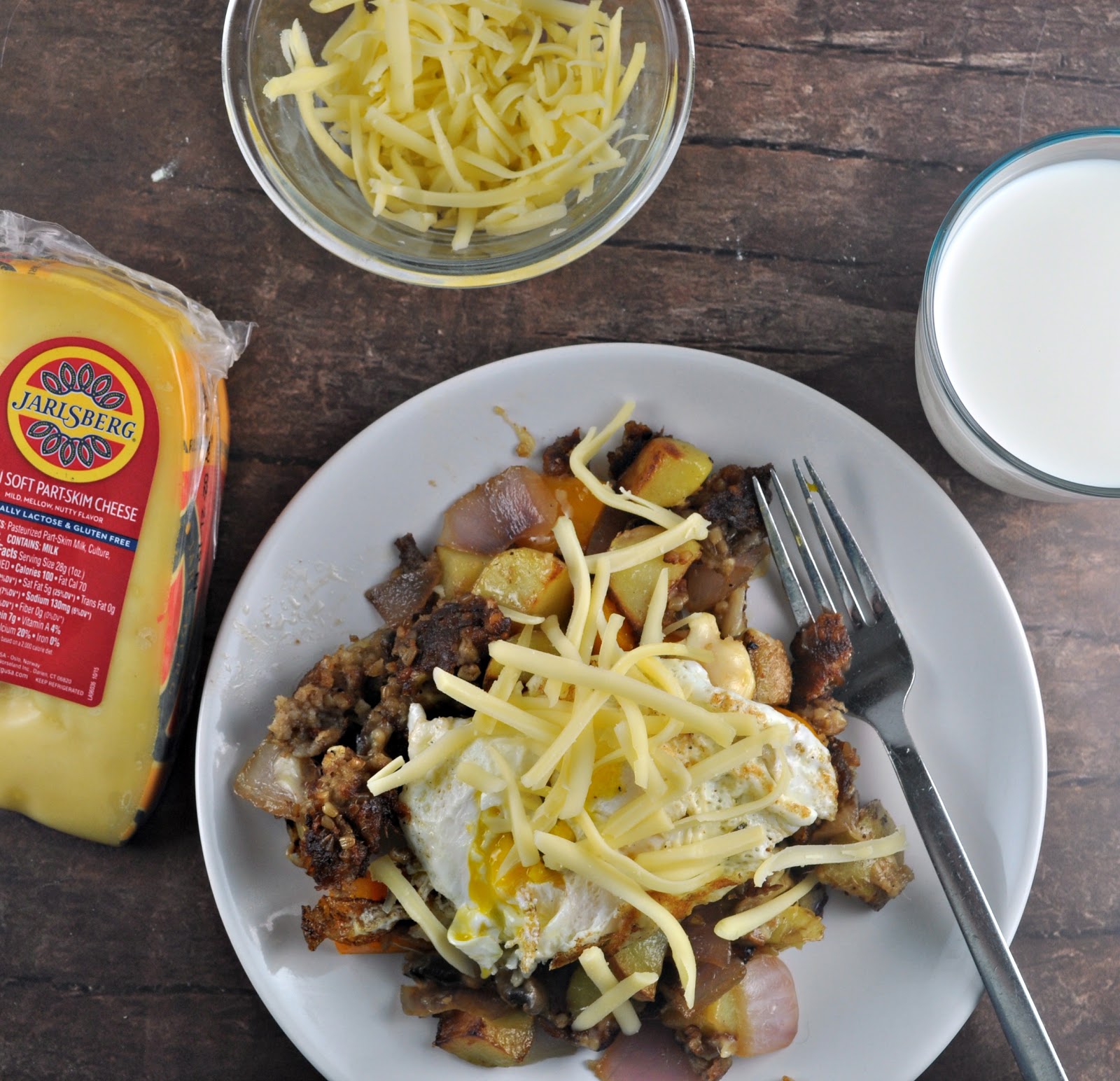 I decided that my Cincinnati favorite would be Goetta! If you’re not from Cincinnati – it’s a German mashup of oats and sausage. It’s similar to scrapple but if you don’t have either in your area – you can substitute with pork sausage.

My favorite way to have goetta is thin and fairly crispy with breakfast – so I decided to take my normal breakfast hash and doctor it up with goetta and Jarlsberg! 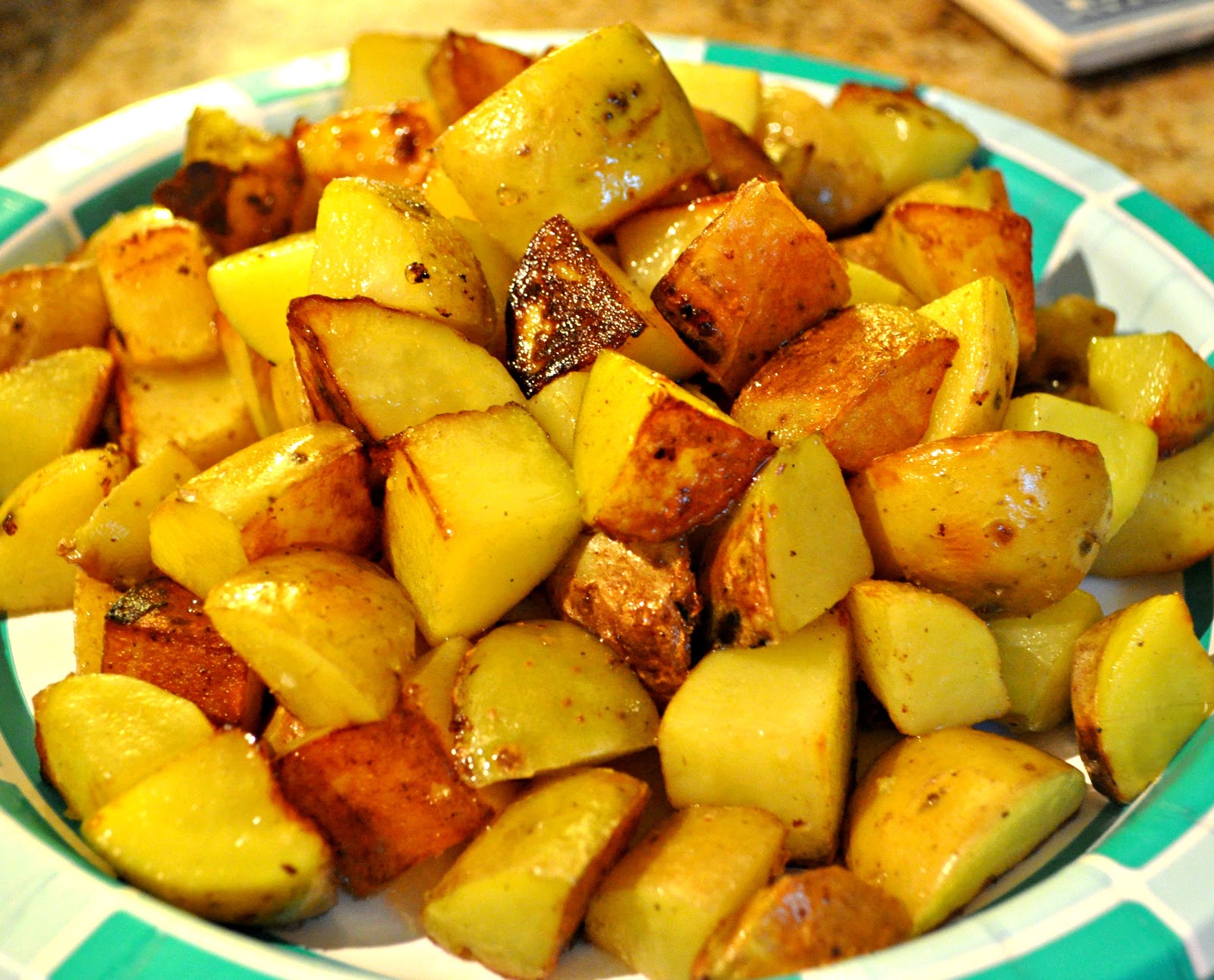 The key to great hash is starting with good potatoes. I always use Yukon gold and I dice them into bite sized pieces. You want pretty much all the bites in your hash to be of similar size. I find it easier to cook everything separately – then it’s getting done the right amount. 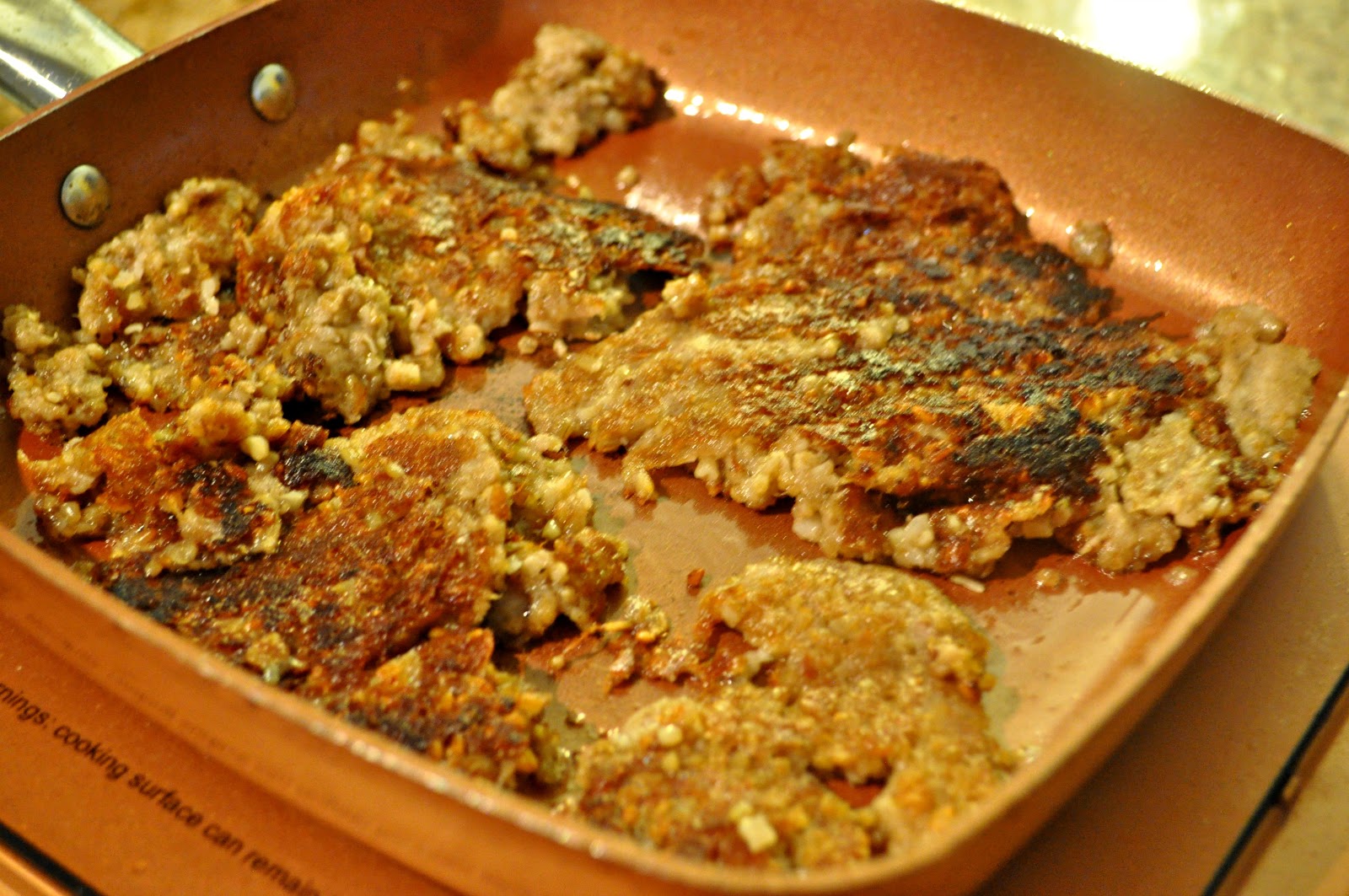 After the potatoes, I fried up my goetta! Because of the oats in the goetta – it was popping and crackling and making my kitchen smell delicious! After the goetta, I sauteed red onion, orange pepper and mushrooms in olive oil. Then mix it all together and top it off with shredded Jarlsberg for a melty delicious hash! 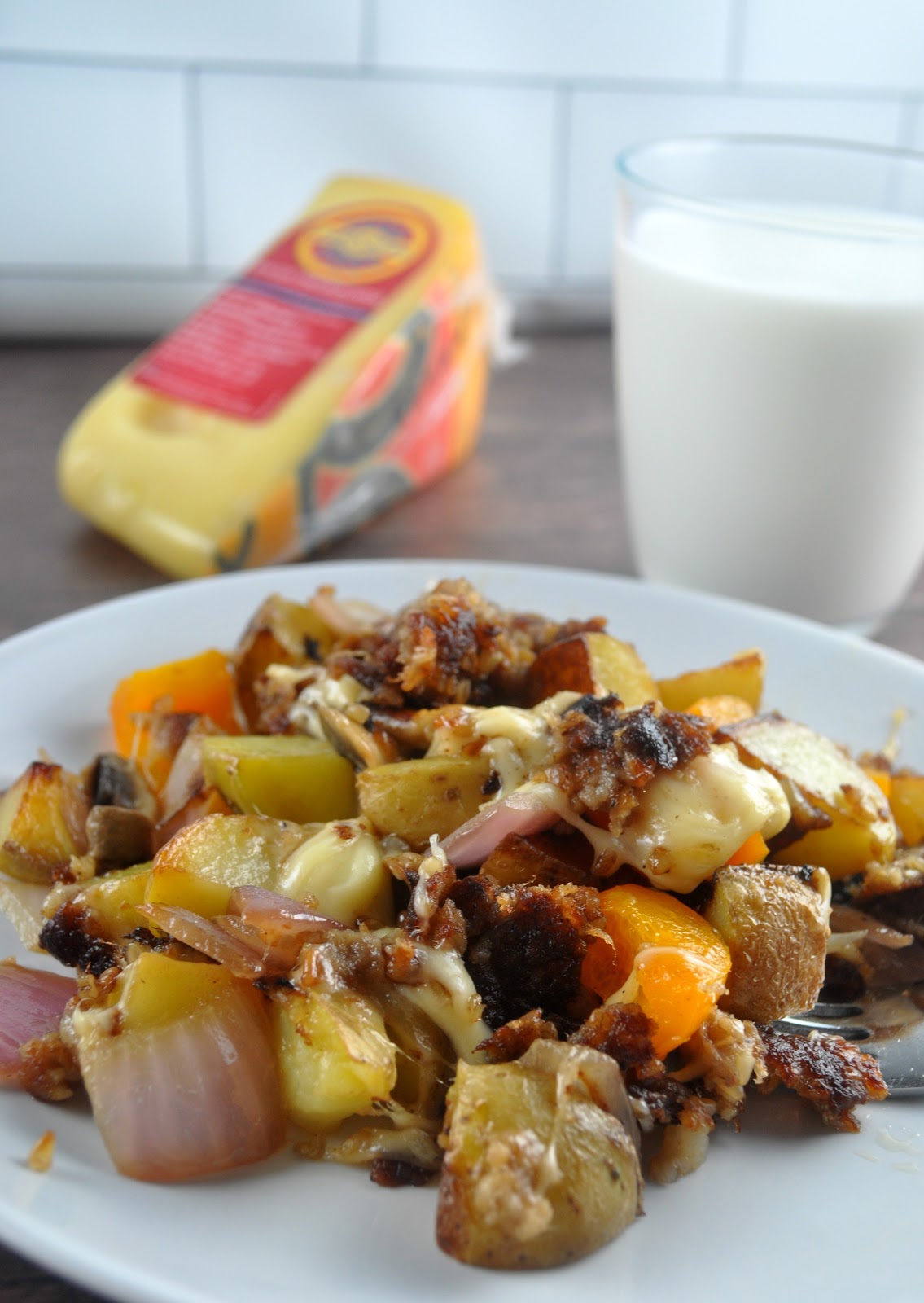 The Jarlsberg is a perfect combination with the hash because each bite has strong flavors and the Swiss cheese matches up to it and holds it’s own. Every bite was so delicious – the pepper was sweet, the red onion had a mild bite, the potatoes were just done with a little crispy edge to them – and everything is better with mushrooms. Each bite was topped off with a little melty Jarlsberg – man oh man – it was comfort food at its finest. 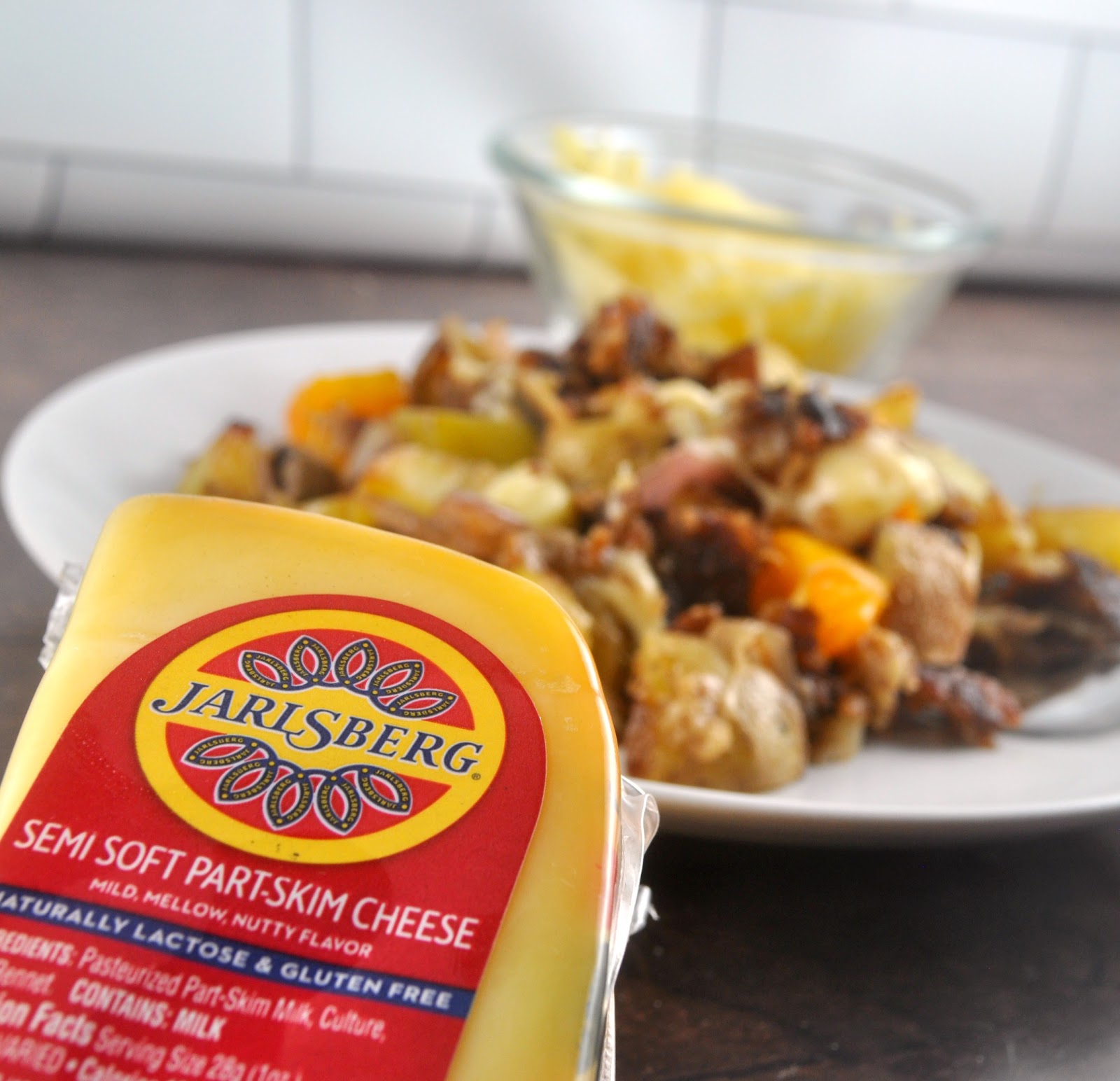 The Jarlsberg is a great is such a versatile cheese – whether you use it in it’s very traditional dip, as a melty topping on hash or even in a grilled cheese or patty melt – it’s got a distinctive nutty flavor – but melds with all the other flavors beautifully. 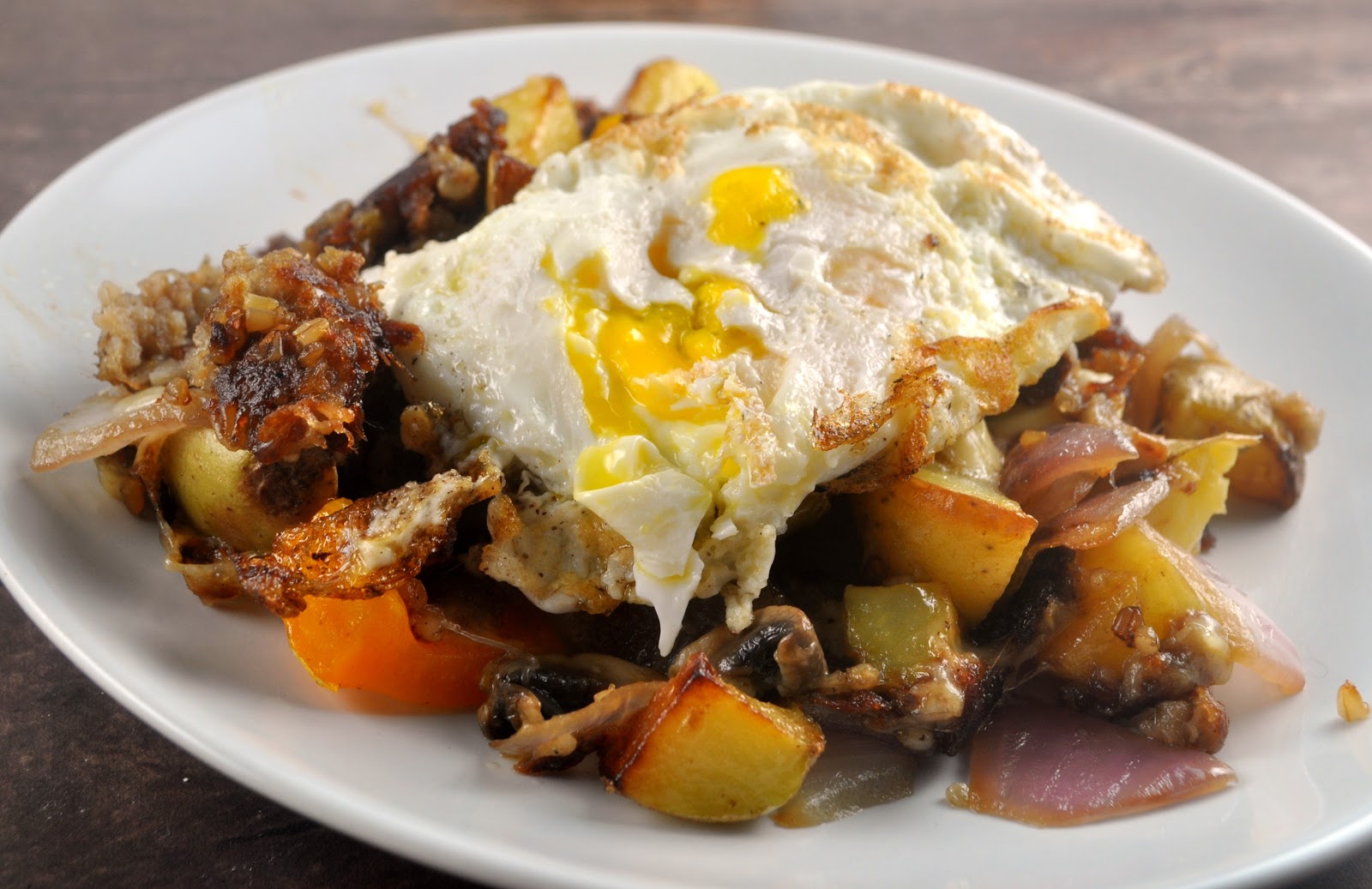 Now what could make this better? Oh yeah – an over-easy fried egg on top would do it! Man oh man – this was so good! My dogs sat by drooling while I inhaled it – not leaving them a bite! 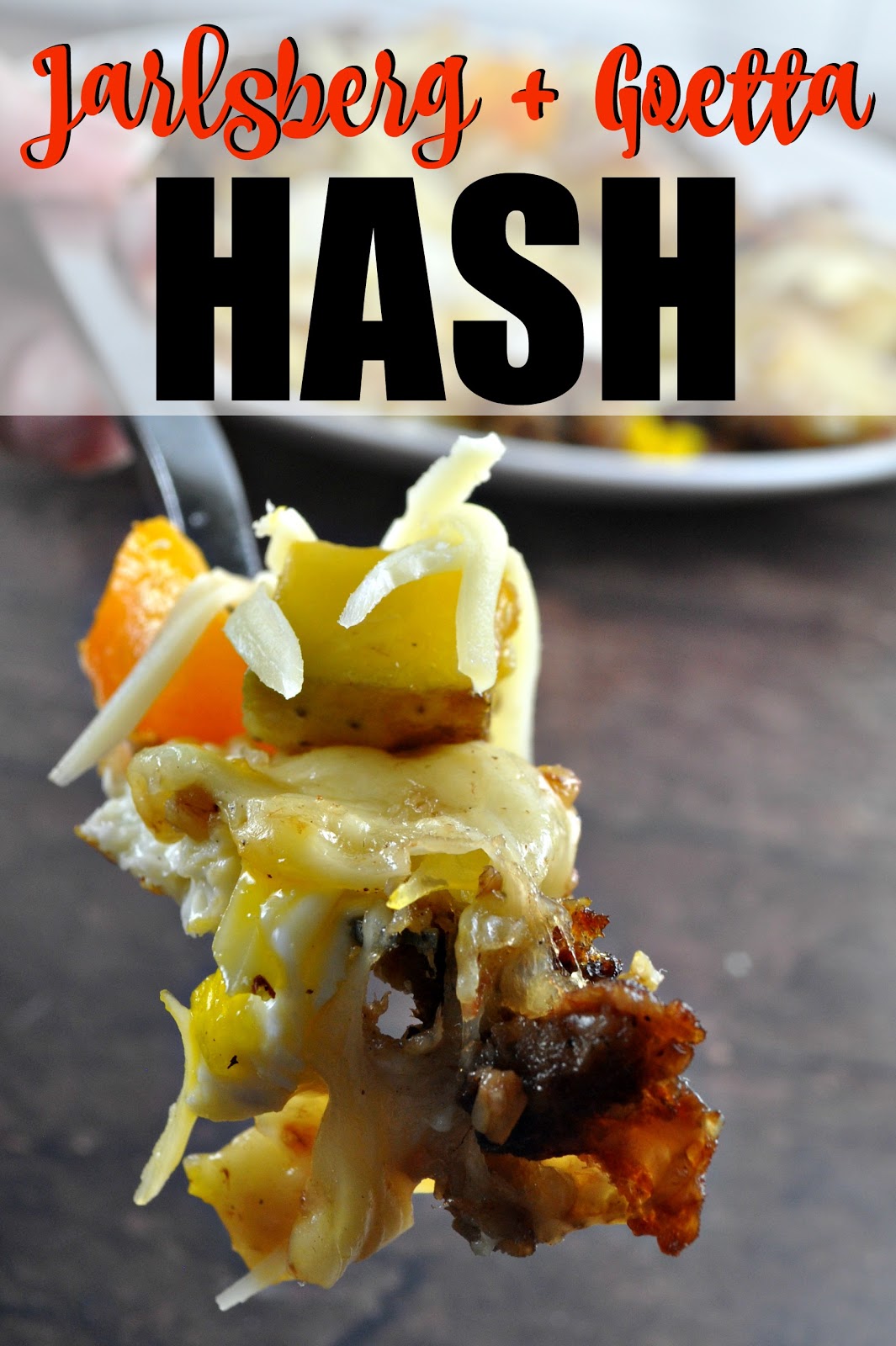 This Jarlsberg and Goetta Hash is a great meal for breakfast, lunch, dinner, brunch, brupper – anytime! It’s comfort food at its best. The cripsy potatoes and goetta with the sweet mushrooms and peppers topped with gooey egg yolk and melted Jarlsberg cheese – oh man – I might just go make another batch right now!!!