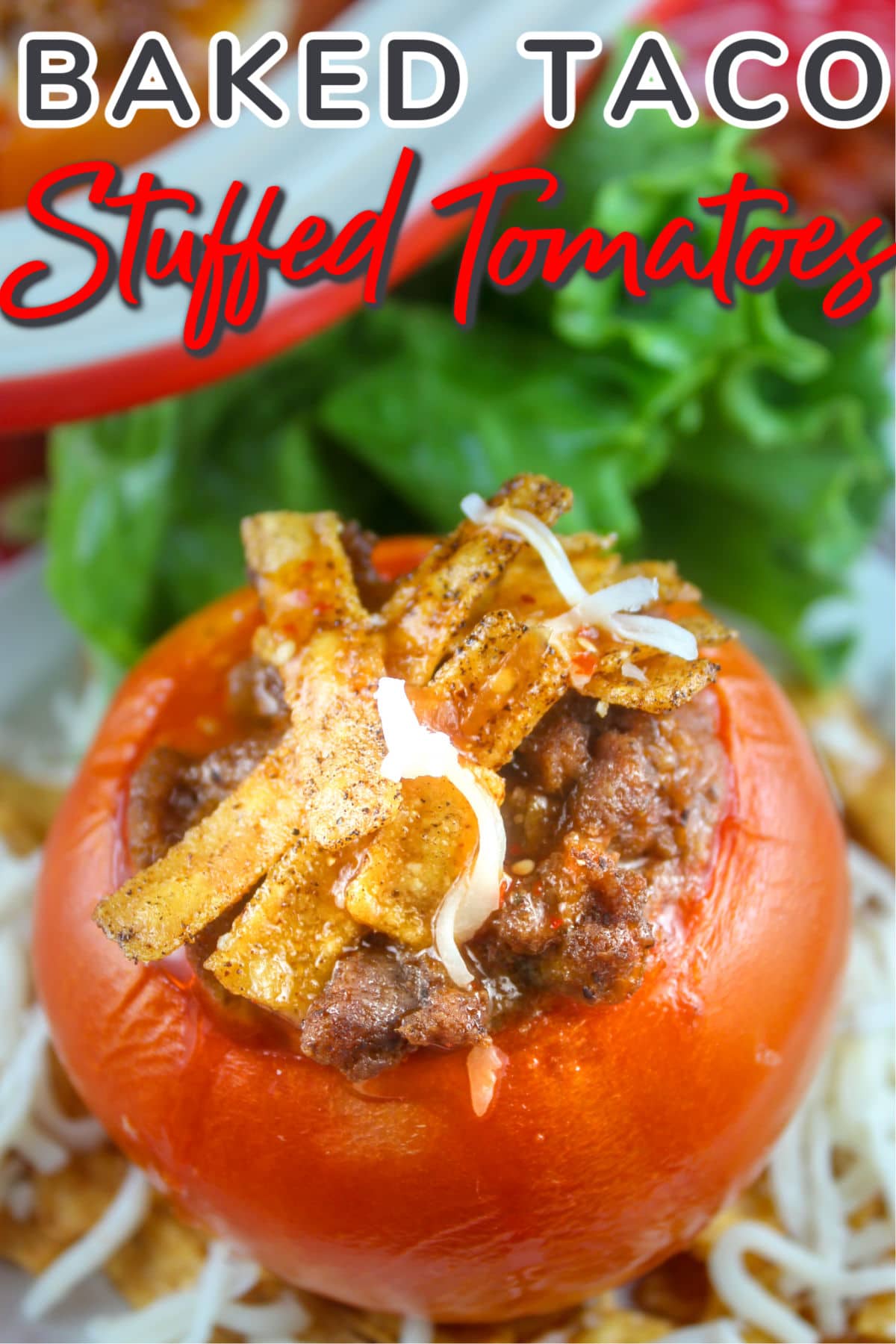 Baked Taco Stuffed Tomatoes are so easy to make and delicious! These stuffed tomatoes are just like eating a taco without the shell! It’s also great for summer since there are so many delicious fresh tomatoes at farmers markets.

A couple weeks ago I made Italian stuffed tomatoes in the air fryer and the were really good so I thought taco stuffing would be tasty as well – plus I was out of taco shells. While the ground beef is cooking – you can prep the tomatoes – so the whole meal is ready in less than 30 minutes!

How do you make Taco Stuffed Tomatoes?

First step is to brown the ground beef. You could easily swap out and use ground turkey or ground chicken as well if you want to lighten the recipe up a little. Preheat the oven to 350.

While the ground beef is browning, you can core the tomatoes. Core the top of the tomato and scoop the insides of the tomatoes into a bowl. You’ll be using them in the taco filling! Once your tomatoes are scooped out, sprinkle salt inside the tomatoes and set them upside down on a paper towel to pull out the excess water.

Spray a baking dish with nonstick spray and place your tomatoes in the dish. Place a couple small diced pieces of cheese in the bottom of each tomato. Spoon the taco meat into the tomatoes. Press a couple more dices of cheese into the filling as well. Top with tortilla strips.

Bake at 350 for 20 minutes. Remove from the oven and top with grated cheese, salsa, sour cream and your other favorite taco fixins. You could also make these in the air fryer – just air fry for 12 minutes at 350.

Can you prepare stuffed tomatoes in advance?

Yes definitely. If preparing a few hours ahead of time – you could get the stuffed tomatoes with ground beef completely ready (minus the tortilla strips on top) and refrigerate until ready to bake. You may need to add 5-10 minutes to baking time since the filling will be cold. If preparing the day before, I would refrigerate the cored tomatoes and the filling separately. You’ll need to reheat the filling in the microwave for a few minutes to loosen it up so you can spoon it into the tomatoes.

Can you freeze stuffed tomatoes?

Yes definitely. I would recommend freezing them stuffed but prior to baking. Thaw completely in the refrigerator before baking.

What goes with Stuffed Tomatoes?

Because stuffed tomatoes are pretty much a meal of their own – the side dishes are simple! In addition to a side salad, here are some other delicious ideas: 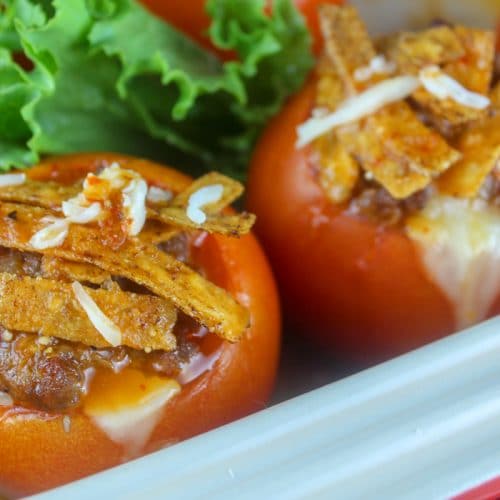 You can also air fry these at 350 for 10-15 minutes
Keyword taco, tomatoes
Tried this recipe?Let us know how it was!
Previous Post: « Copycat Pizza Hut Breadsticks
Next Post: Copycat State Fair Baby Elephant Ears »