Subscribe
I get asked all the time – What is the best food to get at a Reds game??? Last year I tried a bunch of yum at Great American Ball Park and shared them over at Cincinnati USA – well this year I went back to find a new list of yum! I take friends so I can try more food and make sure to let you know the best of the best! Plus – I’ll tell you where to find every goodie! 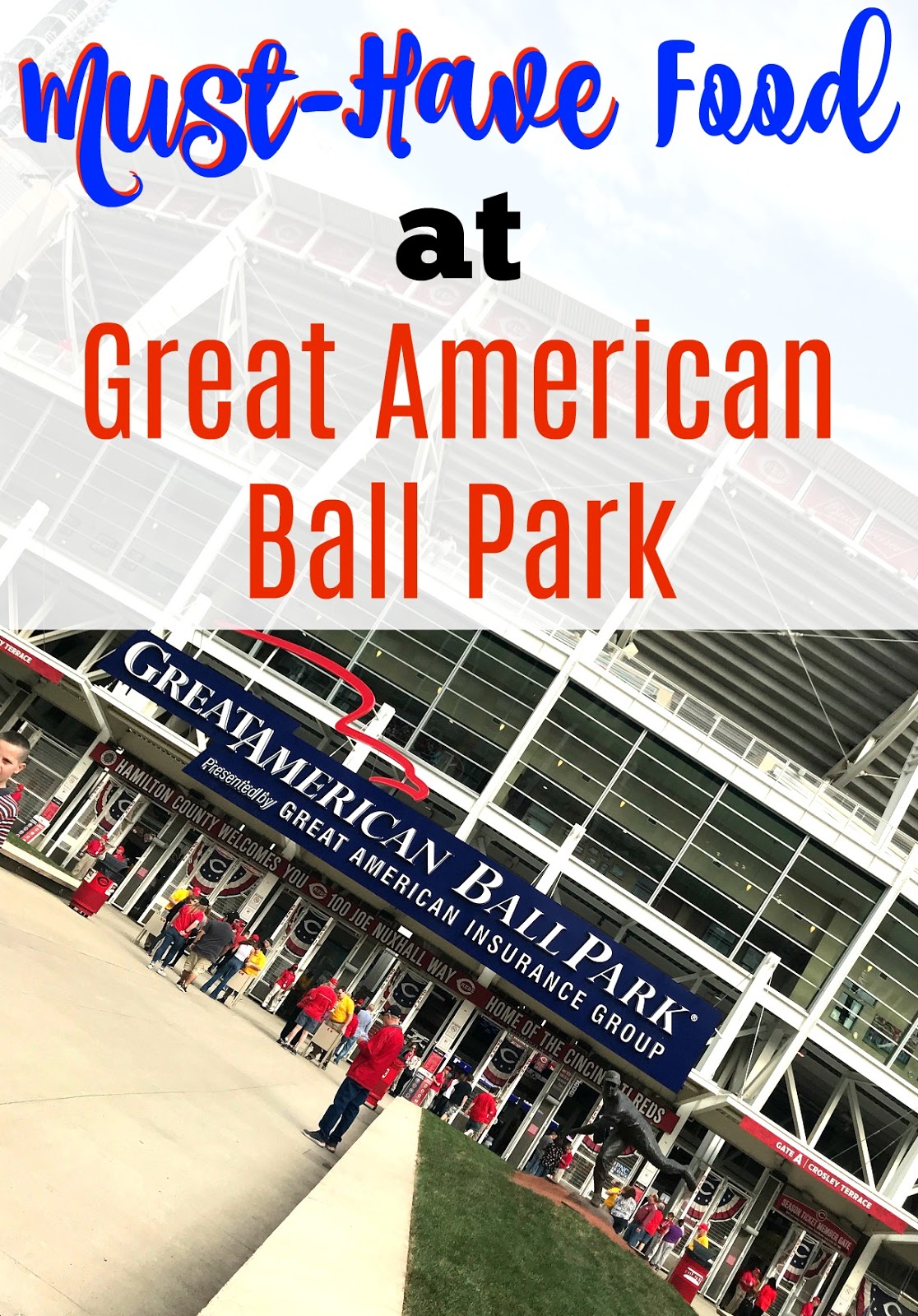 The Reds may not be the best team in baseball at this point – but it doesn’t mean that going to a game is any less fun! They have Redzilla that comes out and shoots t-shirts into the crowd, the mascots running around taking pics and on-screen fun like games and the inevitable Kiss-Cam throughout the game. But for me – I’m good for about 2-3 innings and then I’m bored – so I like running around and finding new must-have foods every now and then. 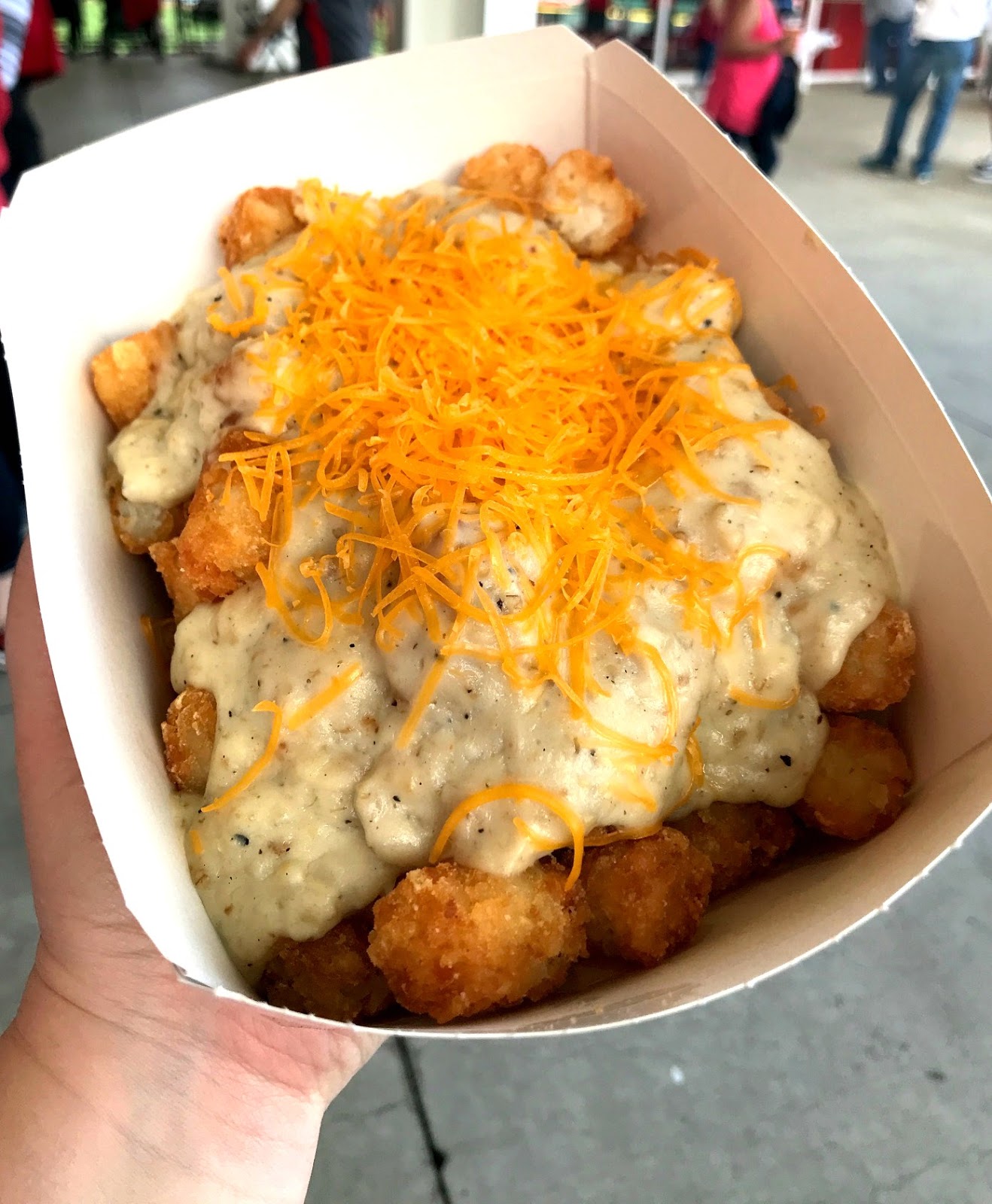 Goetta is a Cincinnati favorite – and if you’re visiting from out of town and aren’t familiar – it’s a mixture of oats and sausage. So then – the folks at the Fry Box paired it with a cream gravy and ladled it all over top of crunchy tater tots and topped it with shredded cheddar cheese. At $12.75 – it’s not cheap – but it’s definitely share-worthy! 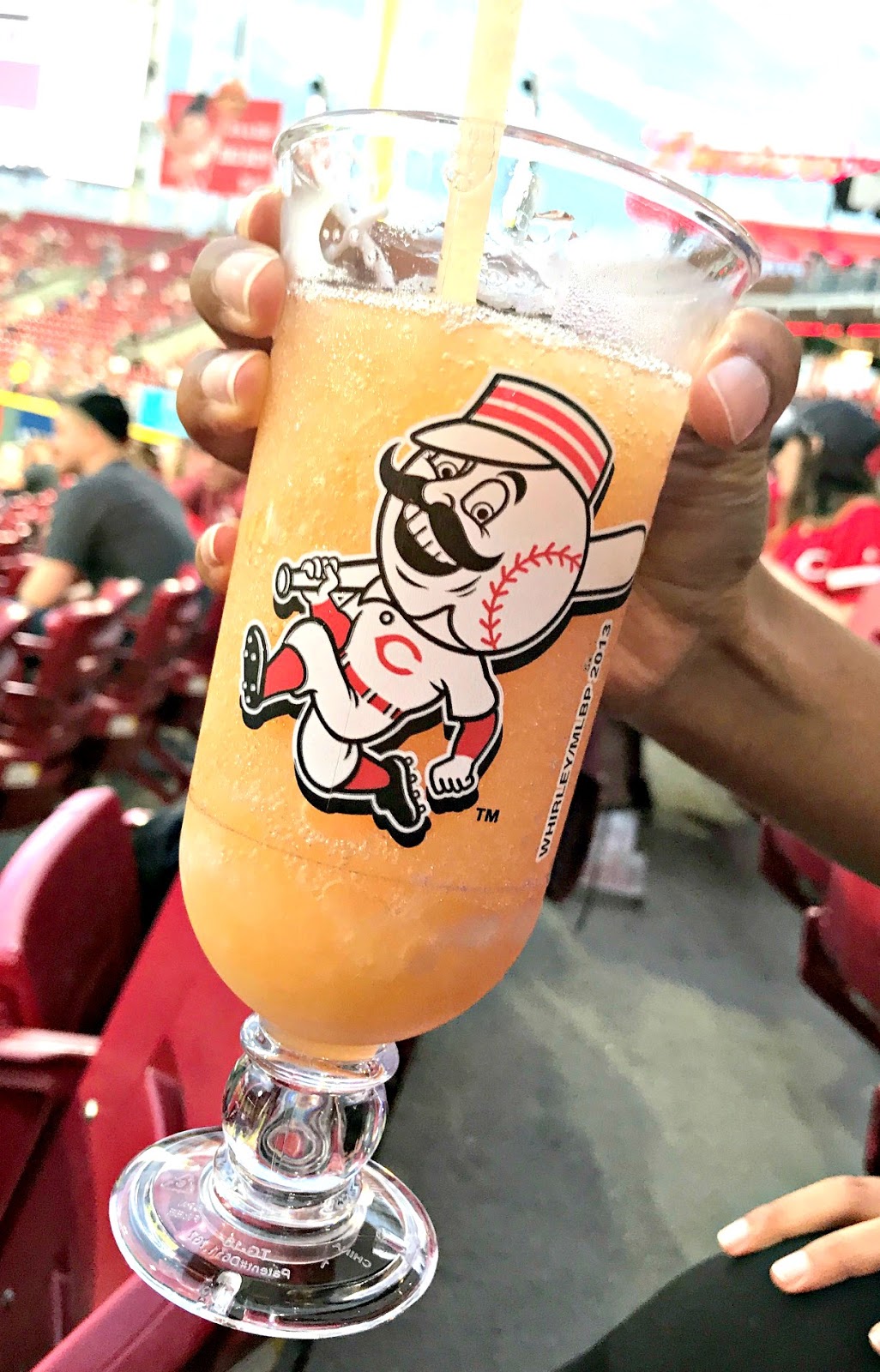 You can find craft beer and “regular” beer everywhere – you can find mixed drinks here and there – but what about something girly and fun?! This year – they got our backs with something they’re calling Frosé which is a white wine and peach frozen concoction. At $12+ it’s expensive but it does come in a fun take-home glass and is super refreshing on the hot days to come this summer.

WHERE TO FIND IT: Beer & Liquor Stand, Section 134 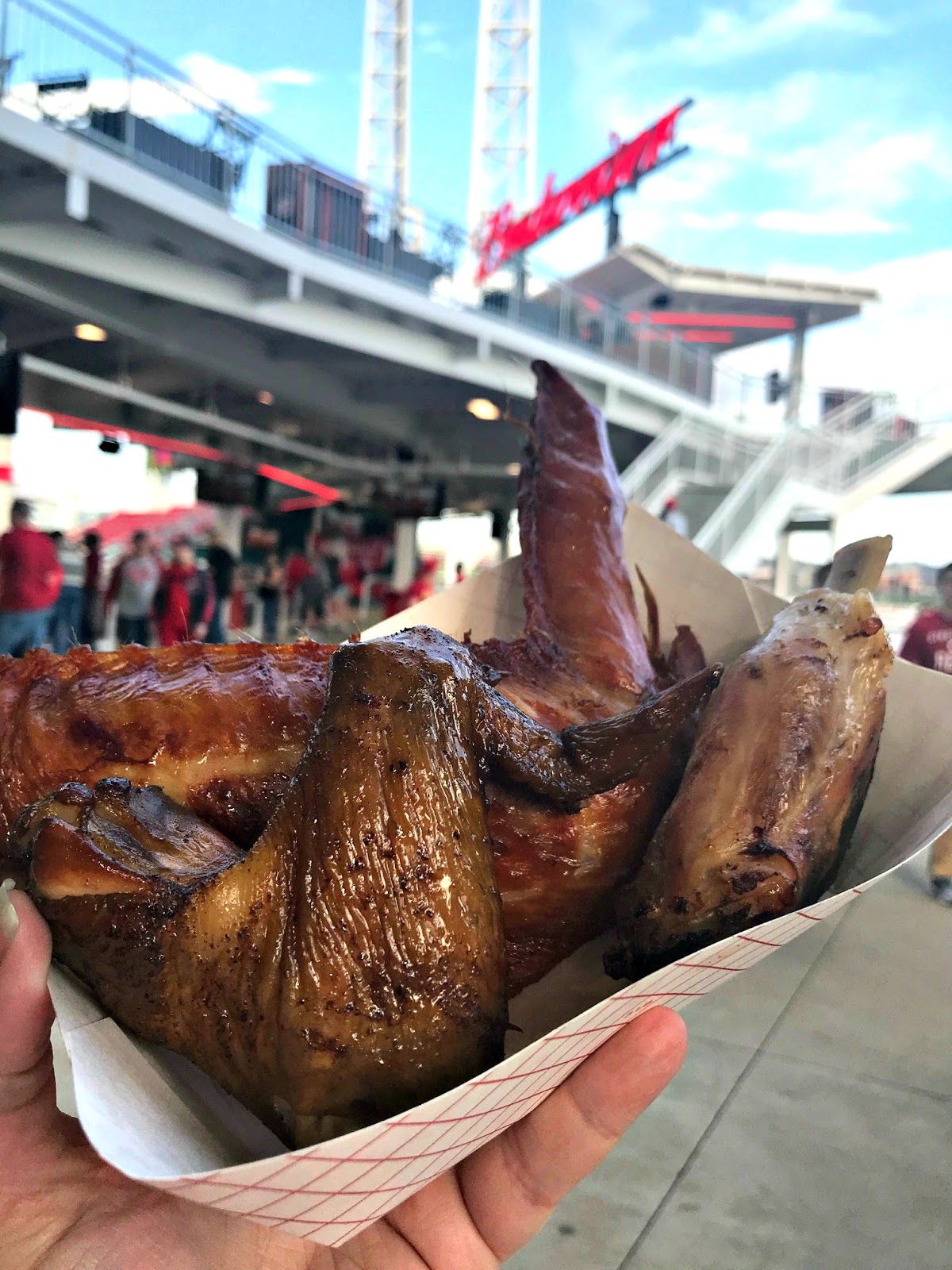 Now sometimes you just want meat and a lot of it. But what kind should you get: turkey, chicken or pork? Guess what – YOU CAN HAVE ALL 3! The Montgomery Inn Smokehouse has something they’re calling the Triple Play (I think it was $15) and it’s got a turkey wing, chicken wing and a hog wing all in one. Since it’s at the Montgomery Inn booth – you can also grab some of their original or Chipotle sauce. My favorite was by far the hog wing – lots of smoked pork and it stays juicy. While you’re there – be sure to grab one of the new bowls they have – it’s a fried bowl (like a taco salad) filled with pulled pork, beans and sides. They only make so many bowls – so when they’re gone – they’re gone for the night. It looked so good – but we came back for one in the 6th inning and they were out. 🙁


WHERE TO FIND IT: Montgomery Inn Smokehouse, Section 137 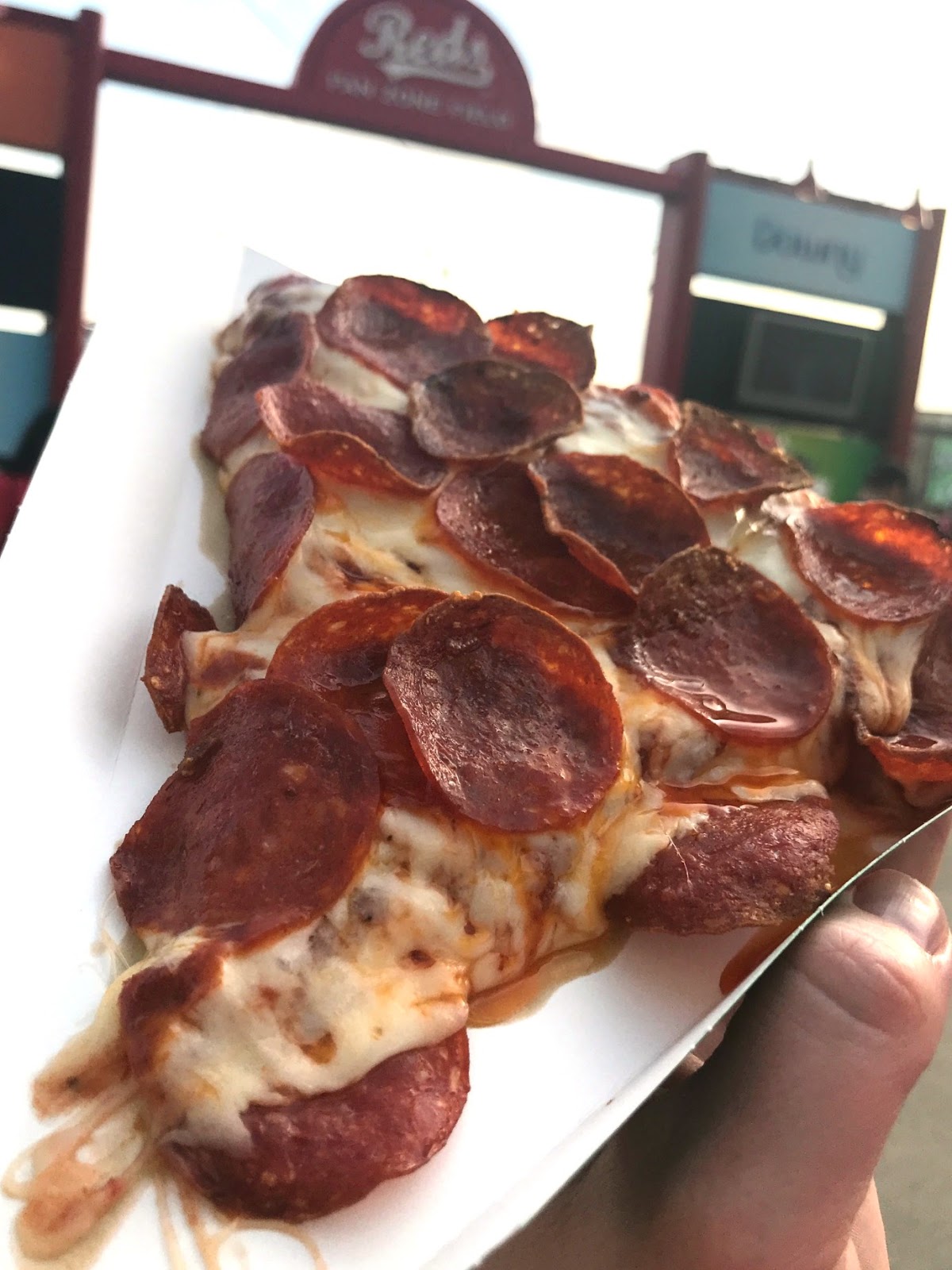 There are so many foods at Great American Ball Park that are truly Cincinnati favorites from Skyline Chili to Frisch’s Big Boy and finally – LaRosa’s Pizza. It’s the pizza of Cincinnati and while I like it – it’s always better at King’s Island or at the ballpark. We had a kid in our group and he was hell bent on pizza. You’ll find piping hot cheese and pepperoni pizza at the LaRosa’s booth and it won’t disappoint! 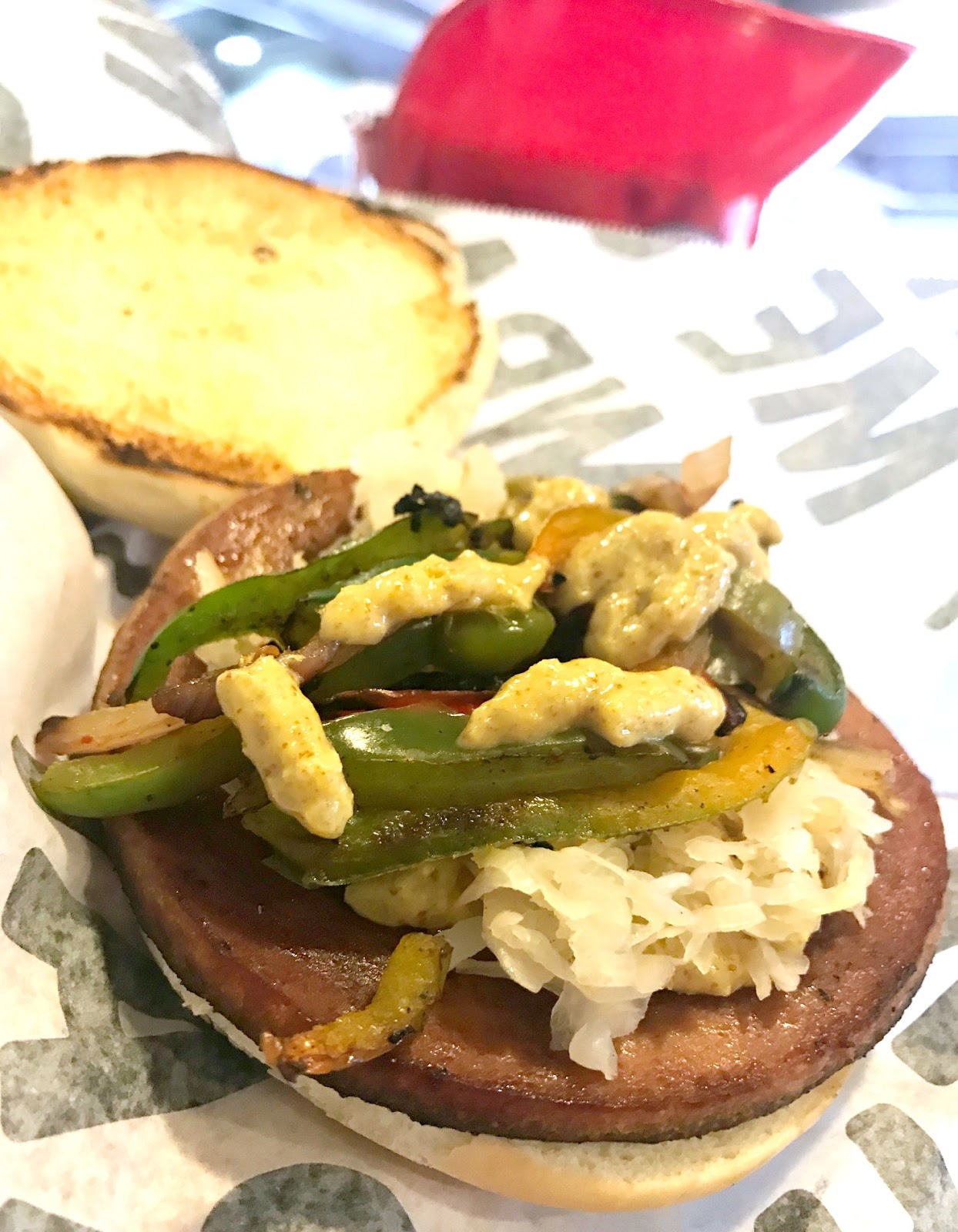 My husband just asked me last week if I’d ever had fried bologna and I hadn’t. I was at the Keystone Bar & Grill booth and was just about to order their delicious bbq mac & cheese when I saw Queen City Sausage Fried Bologna Sandwich on the menu!! (can’t remember price) I jumped at the chance to order this – I absolutely love Queen City Sausage!

This sandwich might have been my personal favorite of the day – but I know a lot of people won’t even go there and they are missing out! The fried bologna is fresh and served on an english muffin – which I thought was a unique choice but I liked it. What made this sandwich so good were the toppings – I doubled up on the spicy mustard and added sauerkraut and fried onions & peppers. The mustard is a must and when it’s all together – it’s delicious!!! I sort of picked at and shared a lot of the food because I was trying so many things – but not this – this was ALL FOR ME!

WHERE TO FIND IT: Keystone Bar & Grill, Section 127 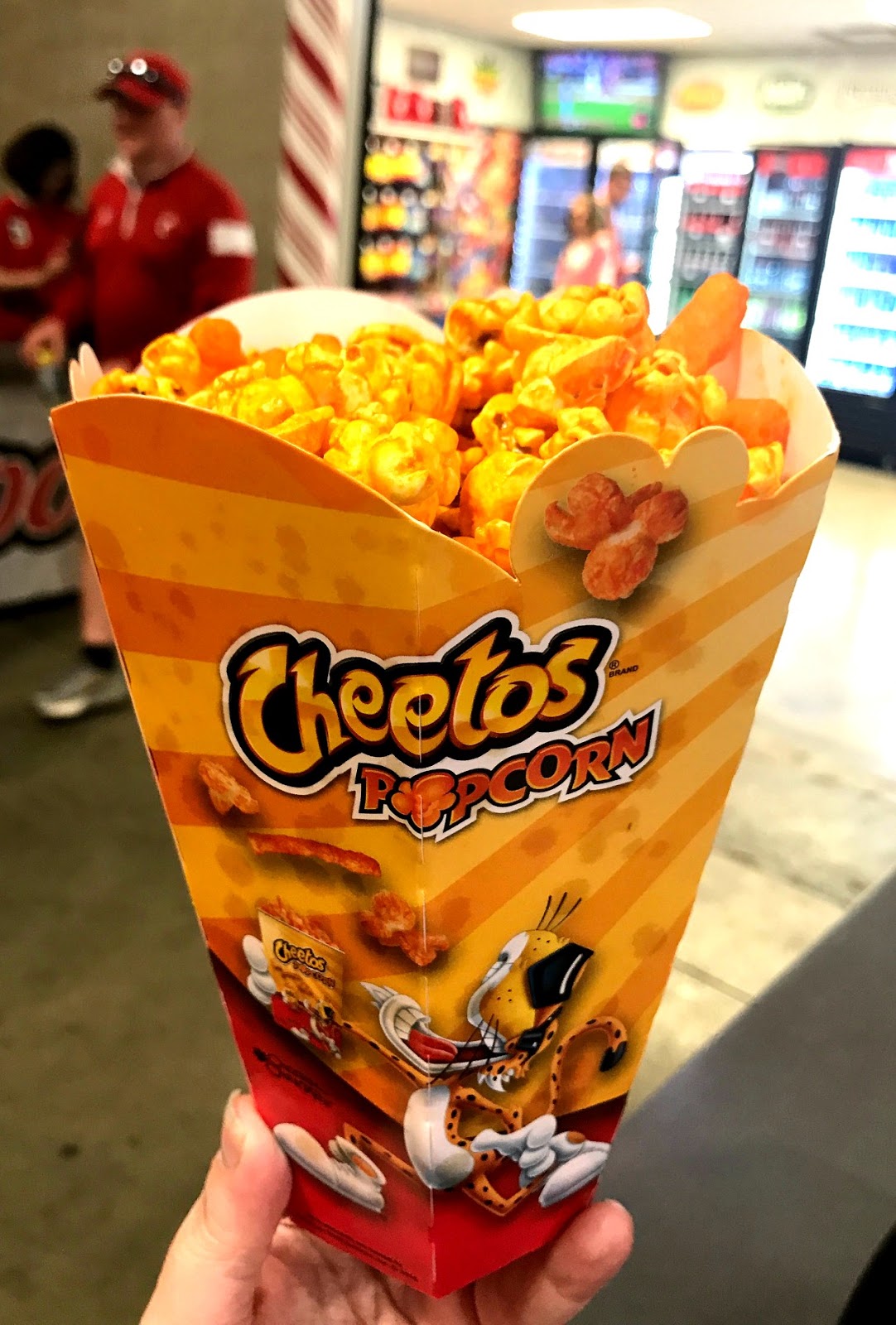 Now, we’re getting to snack time. You’ve had your meat and drinks – and you want either something salty or something sweet and I have both for you! First up – the salty! Right outside the Kroger Sweet Spot you’ll find Cheetos Popcorn. SAY WHAT??? Yes! they have a tumbler that heats up cheesy popcorn and Cheetos and for $10 – they pile it in a bucket for you and send you on your way.  It’s a steep price for popcorn – but IT IS WORTH IT! This is very sharable and addictive. Once you try it – you’ll get it every game you go to!

WHERE TO FIND IT: Kroger Sweet Spot, Section 114 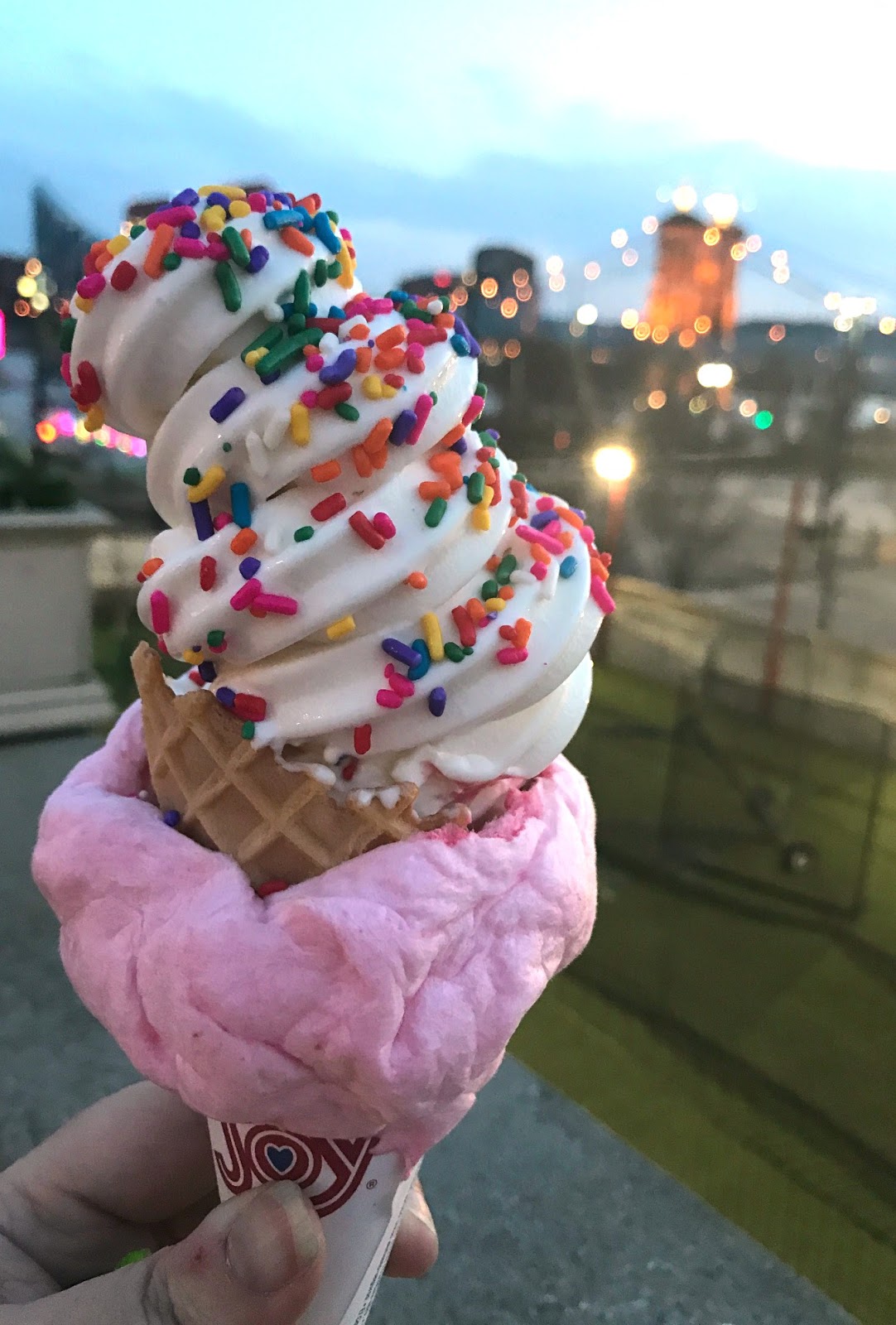 Now for the sweet tooth – there are ice cream sundaes in little helmet cups which are very popular – or you can get some Hot Fudge Cake from the Frisch’s booth – but the one I had to try was the Cotton Candy Ice Cream Cone. This is a little hidden at Section 131 around the corner from LaRosa’s out by where a lot of the kids stuff is. This was like $7 and is a waffle cone that’s topped with cotton candy and you can add soft serve and any sundae toppings that you want. It’s a bit messy but the cotton candy is a fun addition – it’s sweet and adds a different texture from the cone and the ice cream.

WHERE TO FIND IT: UDF Ice Cream, Section 131 (around the corner in Fan Zone)

There you have it! My favorites of 2018 at Great American Ball Park! Also – just as an fyi – the $1 food booths are gone. You definitely won’t go hungry! I wanted to make sure and cover all the food that everybody has access to and no special restaurant or section are needed. These are all also on the first level – so if you’re in the upper deck – get your food BEFORE you head up to your seat!


What’s YOUR favorite ball park food? Here in Cinci or at another ball park?