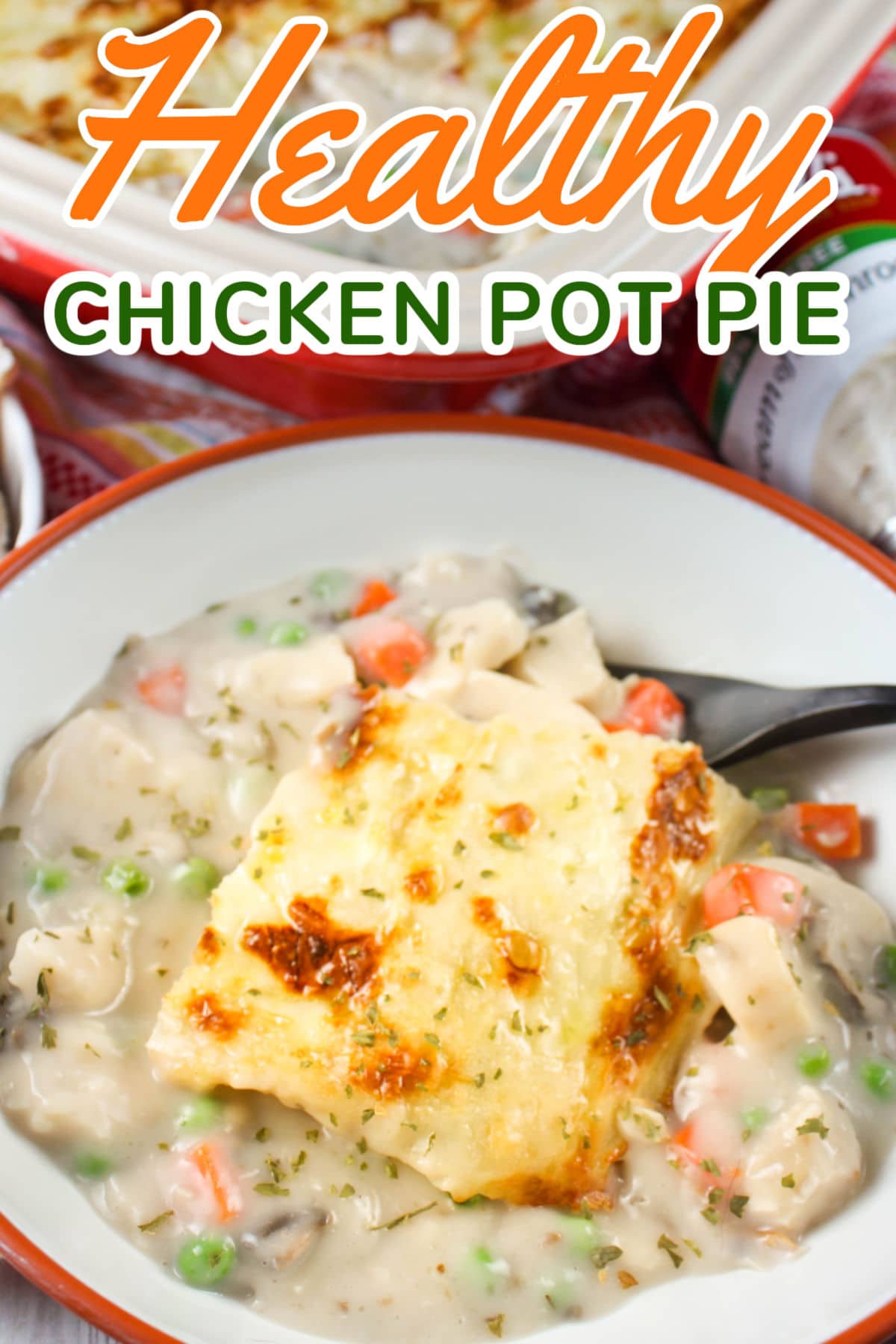 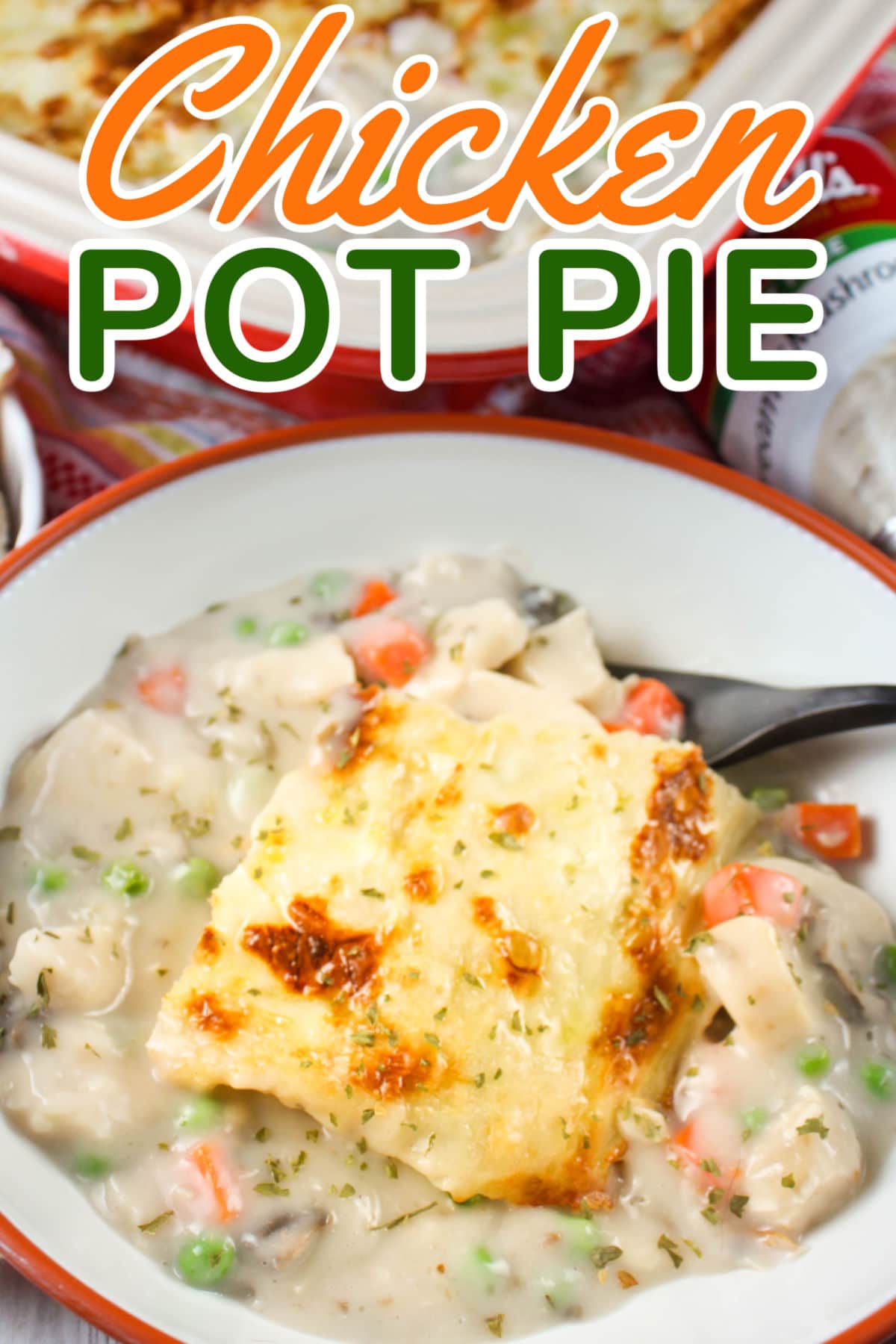 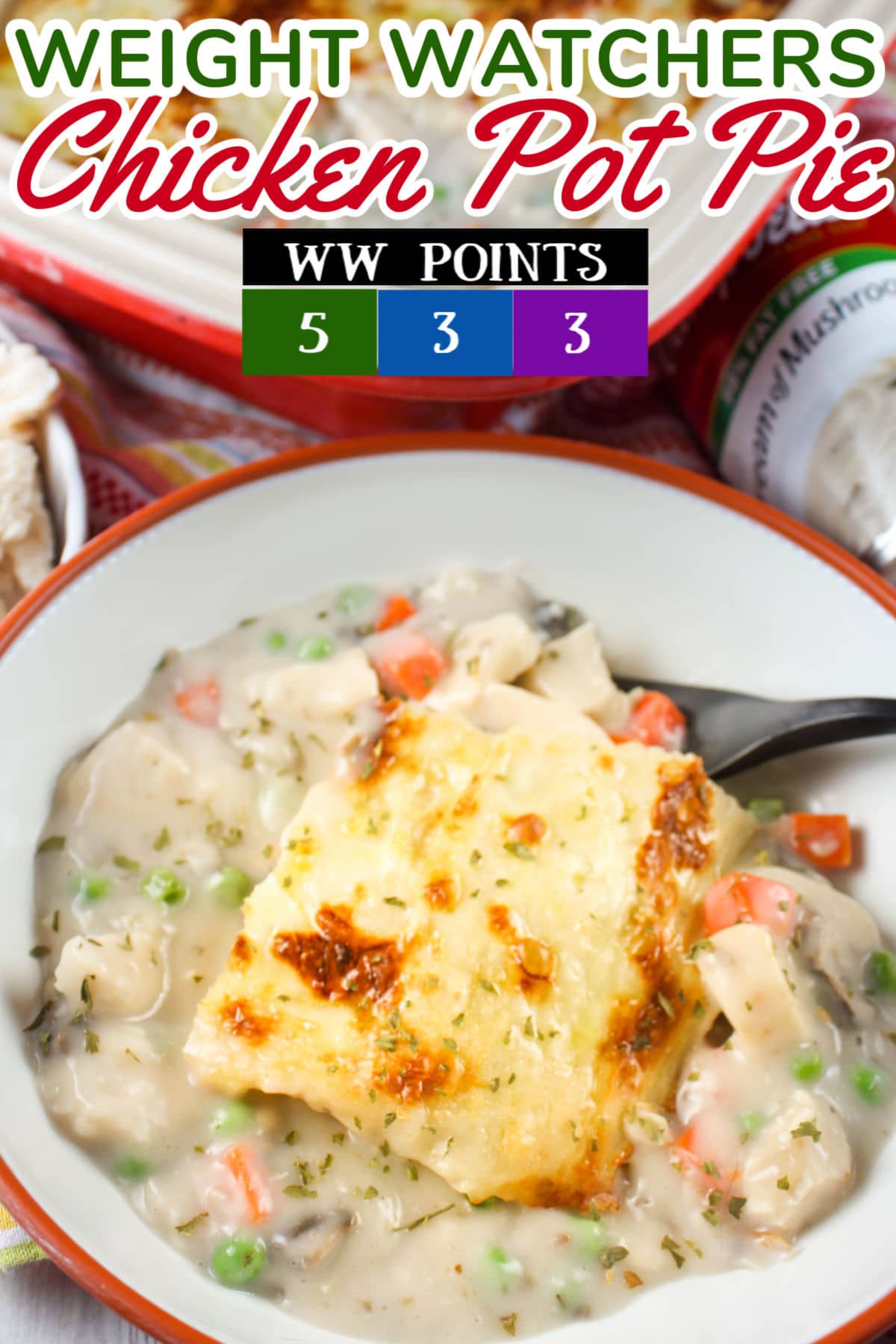 Weight Watchers Chicken Pot Pie is a new favorite for me! I have loved Chicken Pot Pie since I was a little kid and just figured I couldn’t have it on WW – but I found a way! This has the same comforting creamy filling but a lot less calories and fat.

The key was the crust – first – no bottom crust. But you need some crunch – right? I used phyllo dough sheets! Just a few of those laid on top gives that crunch you look for in a chicken pot pie but keeps the points super low. This recipe only has 5 points on Green and 3 on Blue & Purple!

How to make Chicken Pot Pie

Chicken Pot Pie has two major components: the filling and the crust. For the filling – I mixed together cooked chicken breast, frozen peas and carrots with lightly sauteed mushrooms and onions. If you like other veggies – feel free to toss them in as well. Then I added 98% fat free cream of mushroom soup and a bit of 2% milk.

After the filling is ready, pour it into a baking dish. Then, for the crust, lay phyllo sheets on top of your filling! I brushed each sheet with egg white and layered the sheets – only about 5 sheets made a nice crispy crust.

How do you cook chicken breast for Chicken Pot Pie?

There’s a few things you can do – if you need to cook it yourself – I like to make Air Fryer Chicken Breasts – just pop them in and they’re done in 12 min and stay juicy!!! You can also poach them by boiling them – which takes about 20 minutes.

I cheated a bit when I found a big package of cooked chicken breast at Costco and just used that! (It was really good!!!) I portioned out the cooked chicken into smaller bags and froze them – then just grabbed a bag for this recipe!

How long do you bake Weight Watchers Chicken Pot Pie

Weight Watchers Chicken Pot Pie bakes at 375 for 30 minutes. If the phyllo sheets aren’t browning – just change to LOW broil at the end for a few minutes and it’ll brown quickly. Be sure to watch it so it doesn’t burn!!!

How do you reheat Weight Watchers Chicken Pot Pie

This is the one area that isn’t as great – I just microwaved it – and the phyllo got a bit sogged – but it tasted more like biscuit dough then – so it was still good – just didn’t have the crunch. If you keep the crust in tact on the top – you could reheat in the oven or air fryer and it would still hold some crunch.

How does Weight Watchers work?

I’ve been on Weight Watchers since the beginning of the year. I actually got my first weight loss charm last week!!! With WW, you get assigned a specific number of points to eat per day – and foods all have points assigned to them. There are different plans to choose from – the main difference in them is the number of zero point foods you can eat. I use the Green plan because it has the least amount of free foods and I feel I need the boundaries or I’d be eating free foods all day!

What to serve with Chicken Pot Pie

Chicken Pot Pie is pretty much an all-in-one dish and it’s loaded with vegetables – so you really don’t need side dishes. But it’s ripe for a delicious dessert! Here’s a few I like: 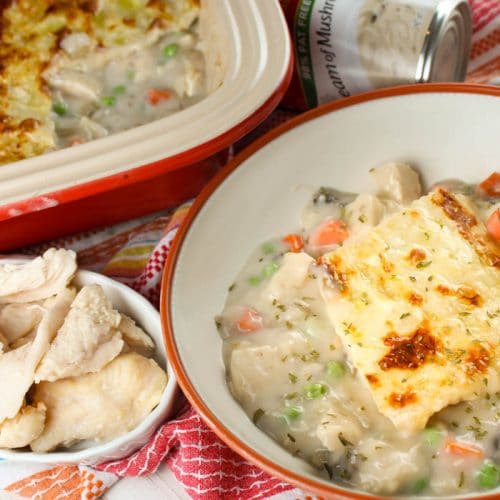 Weight Watchers Chicken Pot Pie is a new favorite for me! I have loved Chicken Pot Pie since I was a little kid and just figured I couldn't have it on WW – but I found a way! This has the same comforting creamy filling but a lot less calories and fat.
4.29 from 7 votes
Print Recipe Pin Recipe
Prep Time 15 mins
Cook Time 30 mins
Total Time 45 mins
Course Entree
Cuisine American
Servings 6 people
Calories 261 kcal