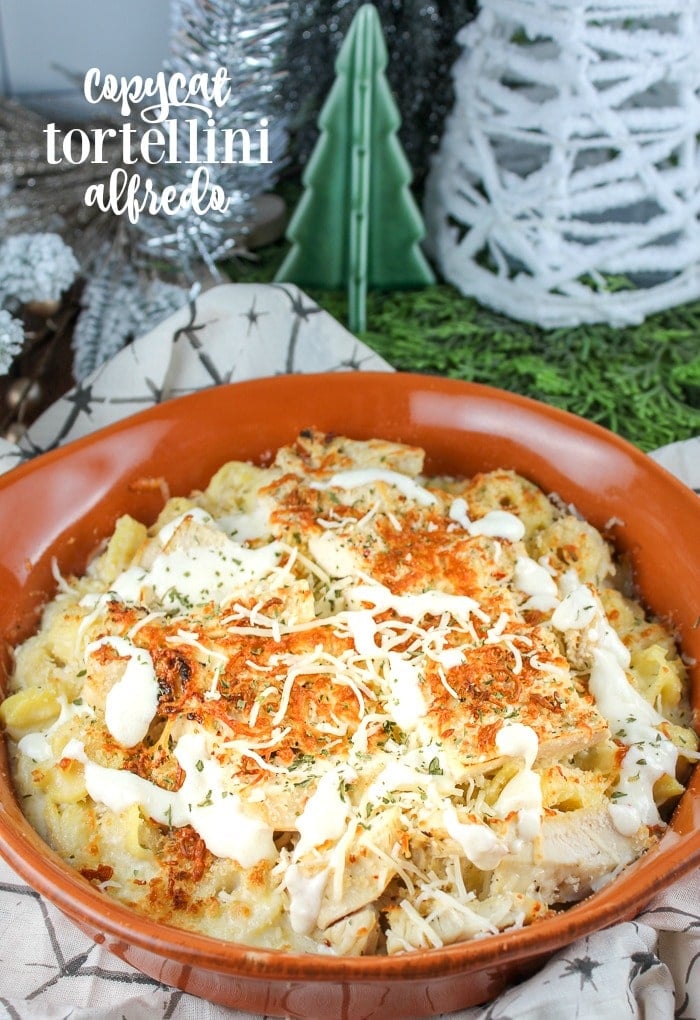 Olive Garden’s Oven Baked Tortellini Alfredo with Grilled Chicken is so delicious! I even found the actual OG alfredo recipe and it’s spot on! This recipe is so delicious and comforting! It’s perfect for a chilly winter night! 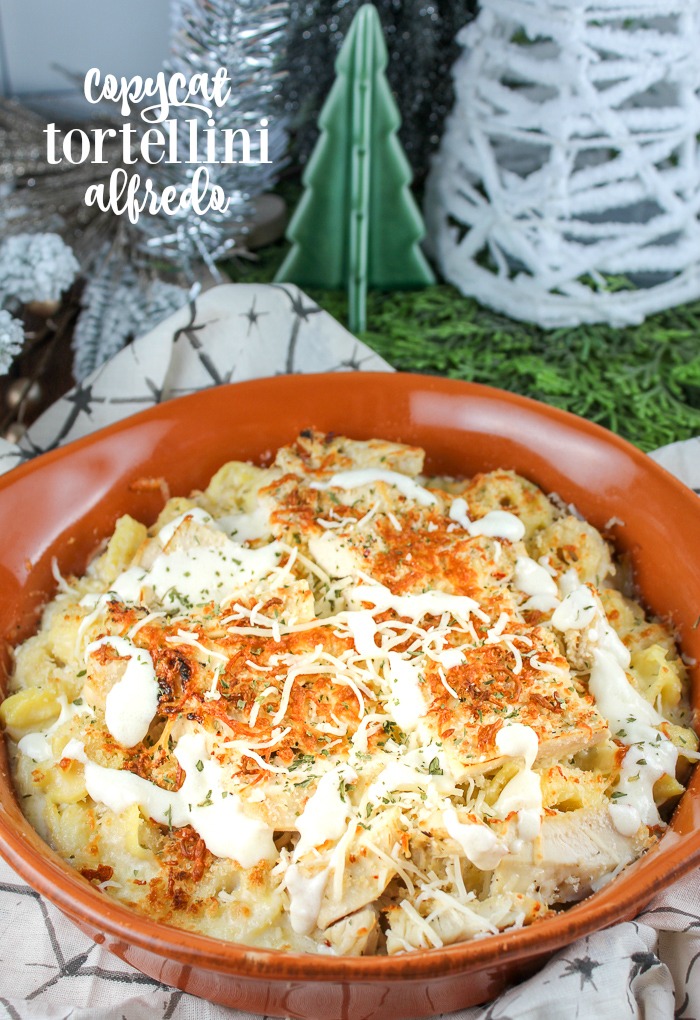 I have a long standing love of Olive Garden – growing up in Iowa – it was fancy (20 years ago) if we went to the OG! And I’m not ashamed to admit I still love it! The Olive Garden special has asiago tortelloni tossed in alfredo and then topped with breadcrumbs and grilled chicken. 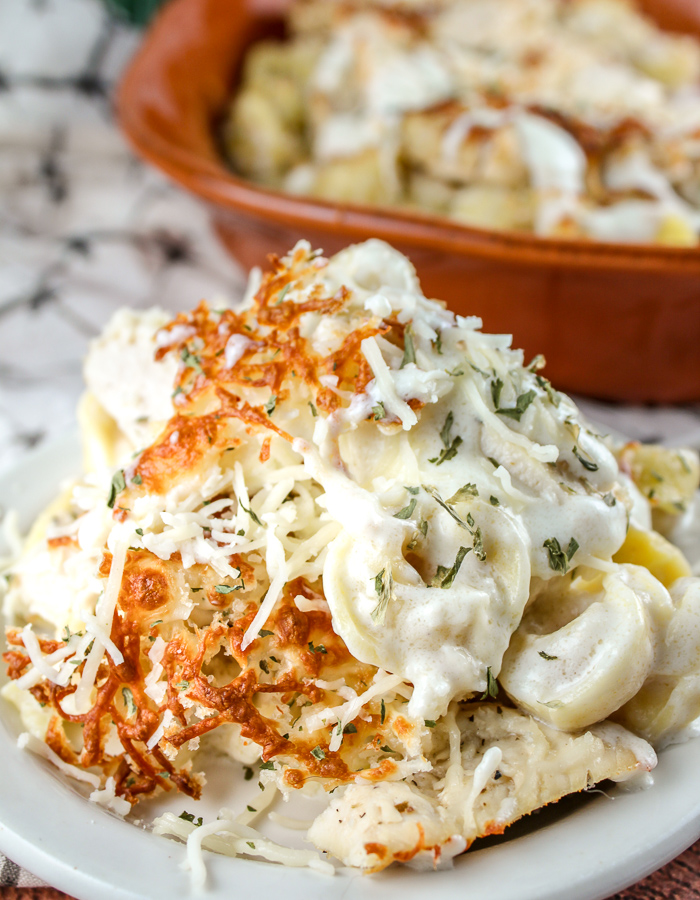 How do you make Olive Garden Alfredo Sauce from scratch?

Olive Garden actually has recipes on their website and one of them is their Alfredo sauce! And let me tell you – it’s spot on! Olive Garden Alfredo is made without cream cheese – so don’t mistake it! It’s very simple to make – melt butter and garlic – add a little flour and stir. Then add Parmesan, Romano, milk and heavy cream. That’s it! It’s so delicious – you can use a jarred sauce but this is easy enough – you shouldn’t!

Nope. It has flour.

Nope. It has butter and cream.

Nope. It has flour and milk. 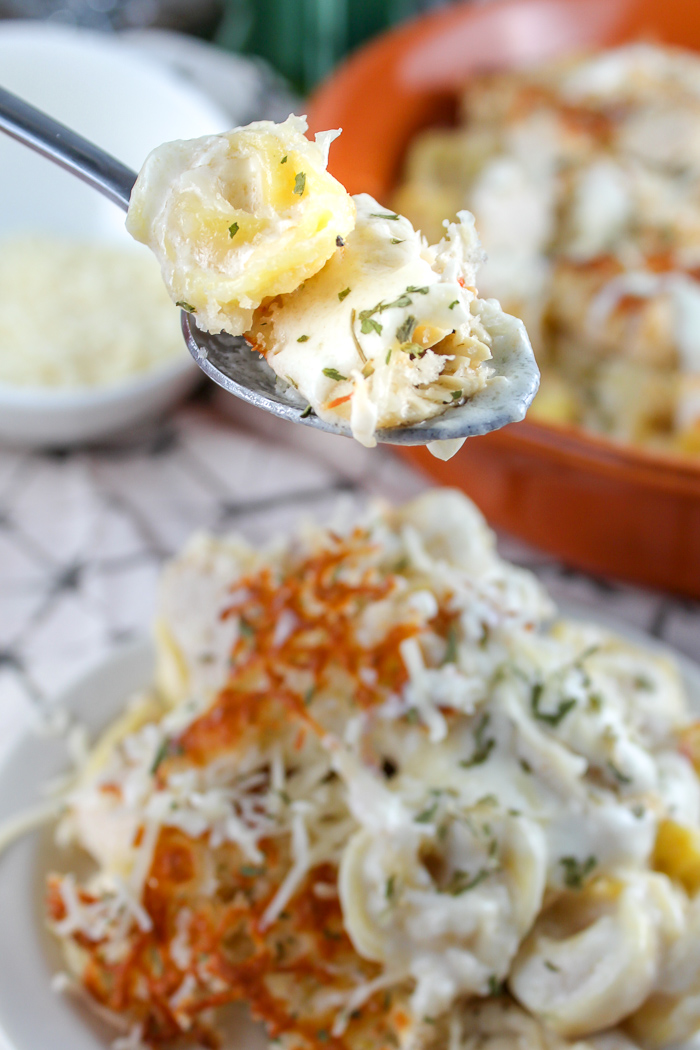 How do you make Olive Garden’s Oven Baked Tortellini Alfredo?

It’s a bit of a juggling act – but it’s on the table in 30 minutes! For the chicken, I just poured the marinade on the chicken and baked it for 25 minutes. While the chicken was baking – I boiled the tortellini. When the tortellini was about half done – I started the alfredo sauce. If you time it right, the chicken, pasta and alfredo are all ready at the same time. Pop the oven to broil – toss the alfredo and pasta together – lay the chicken on top – sprinkle with panko and Italian cheese and in the oven for 3-5 minutes. 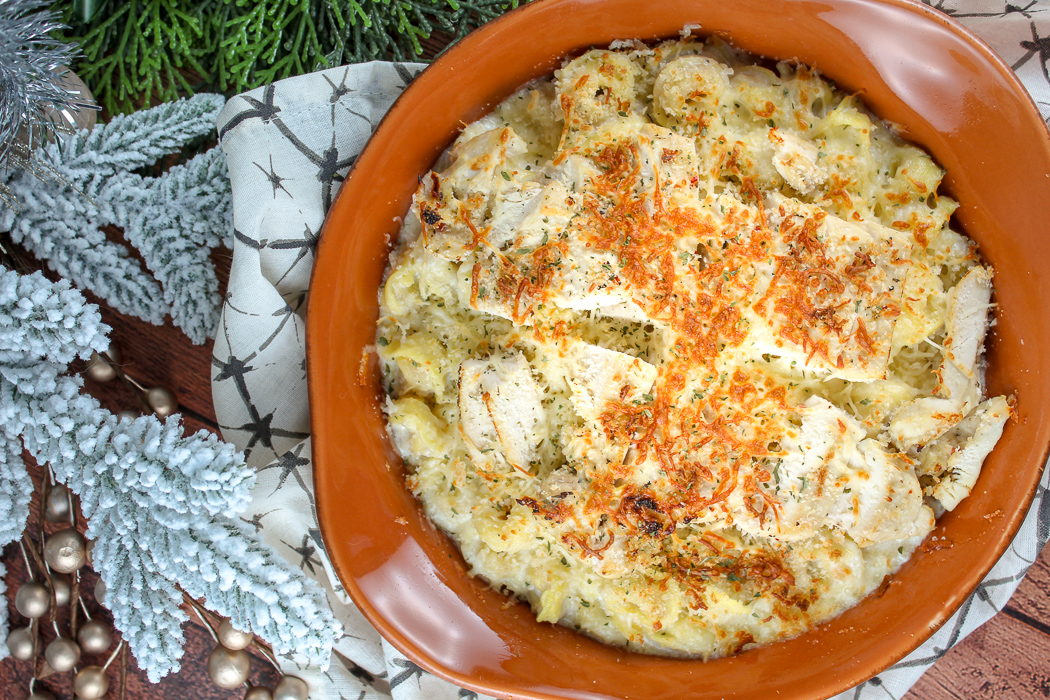 I’m sold on the Olive Garden Oven Baked Pastas – they are delicious! 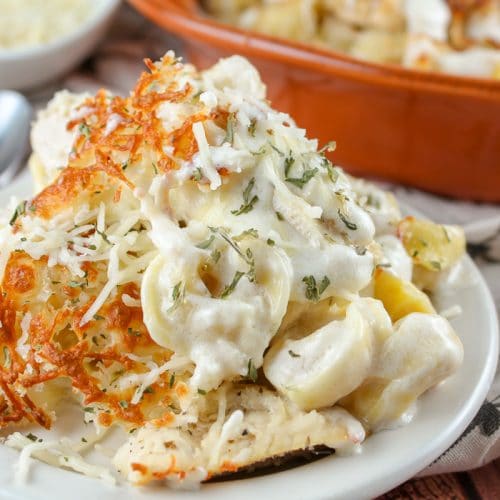 Olive Garden has done it again! They introduced their new Oven Baked Pastas and I had to make one! I chose the Tortellini Alfredo with Grilled Chicken. I even found the actual OG alfredo recipe and it’s spot on! This recipe is so delicious and comforting! It’s perfect for a chilly winter night!
0 from 0 votes
Print Recipe Pin Recipe
Prep Time 5 mins
Cook Time 30 mins
Course Entree
Cuisine American, Italian
Servings 4
Calories 853 kcal 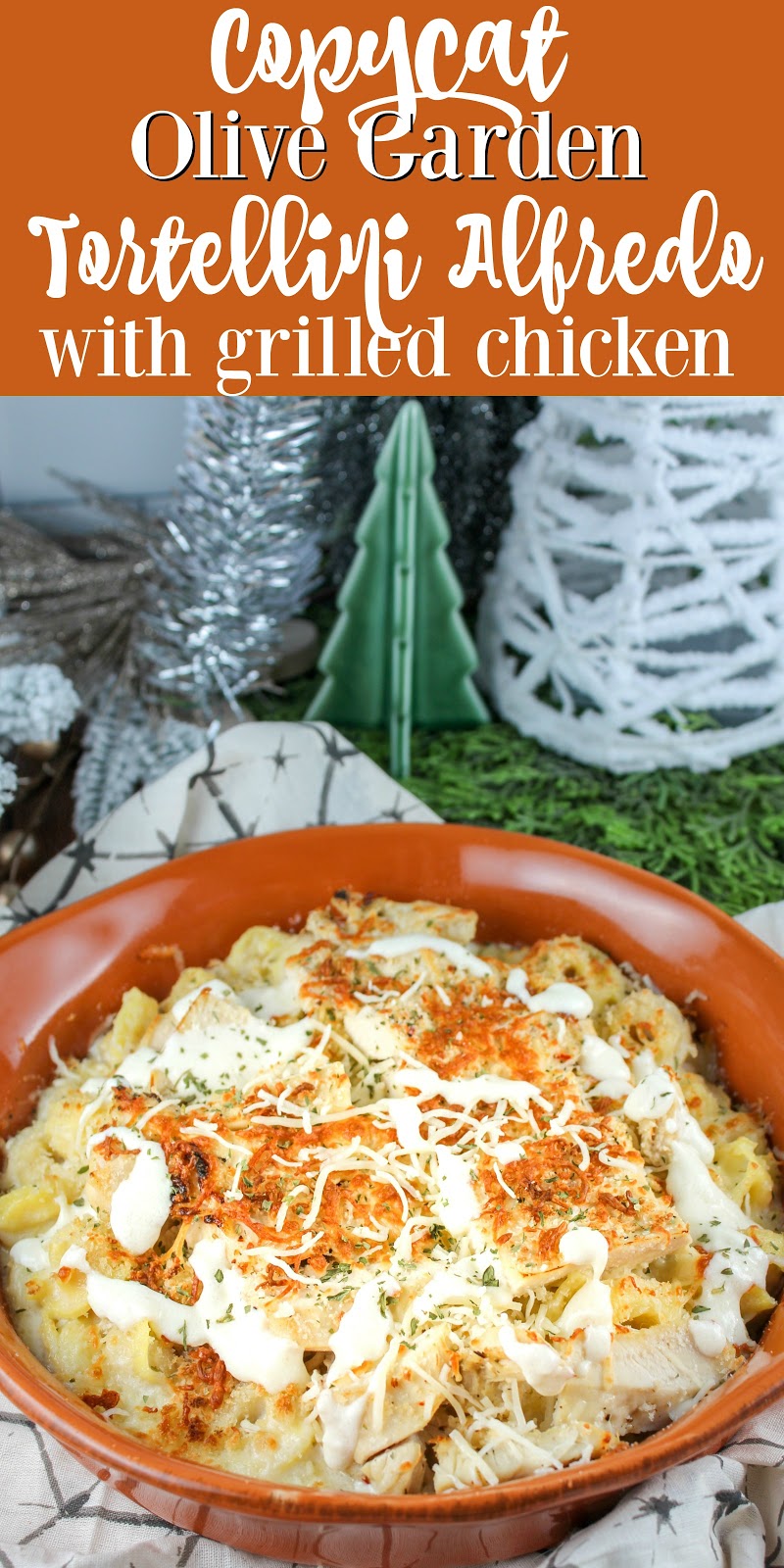 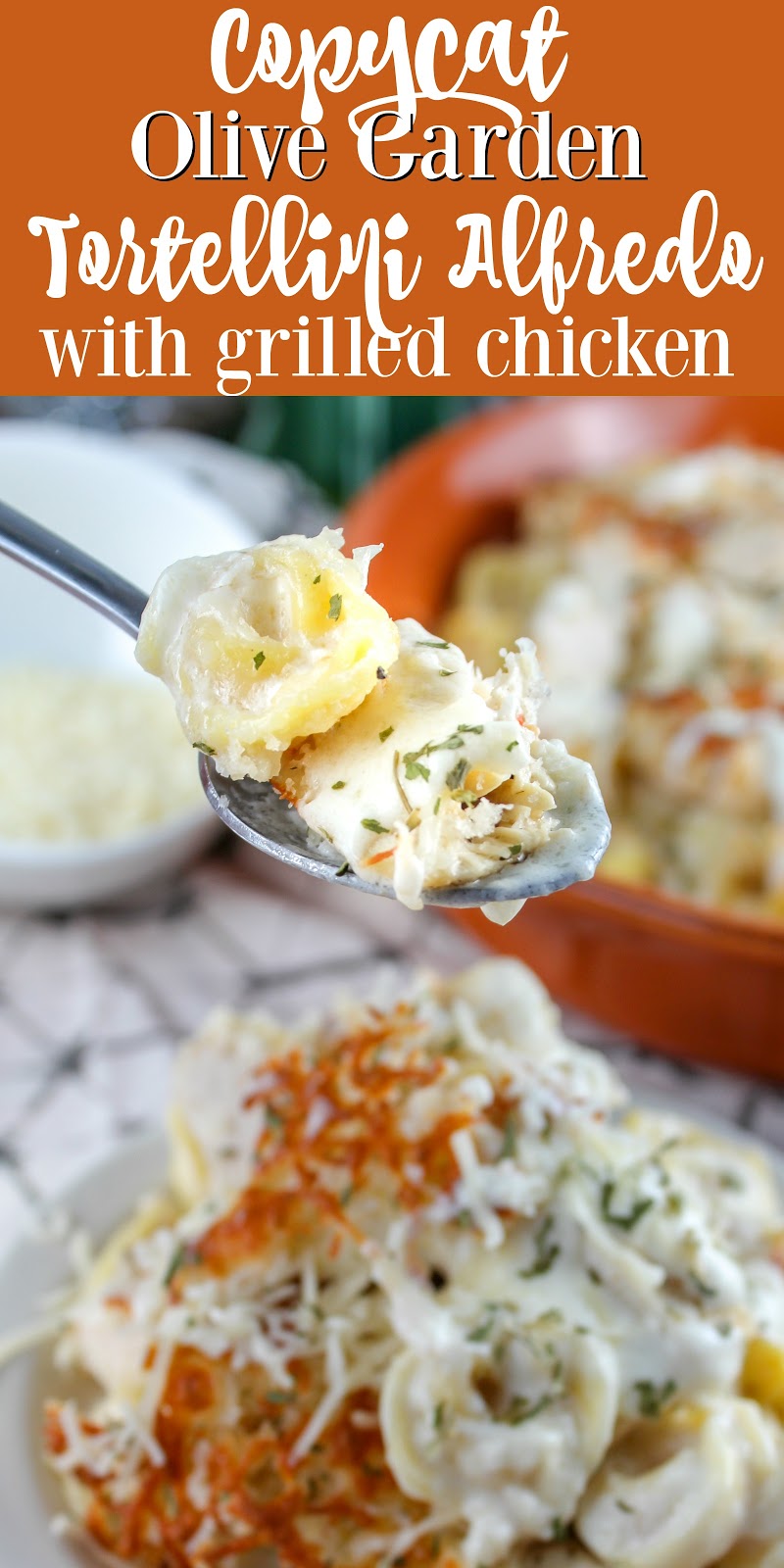