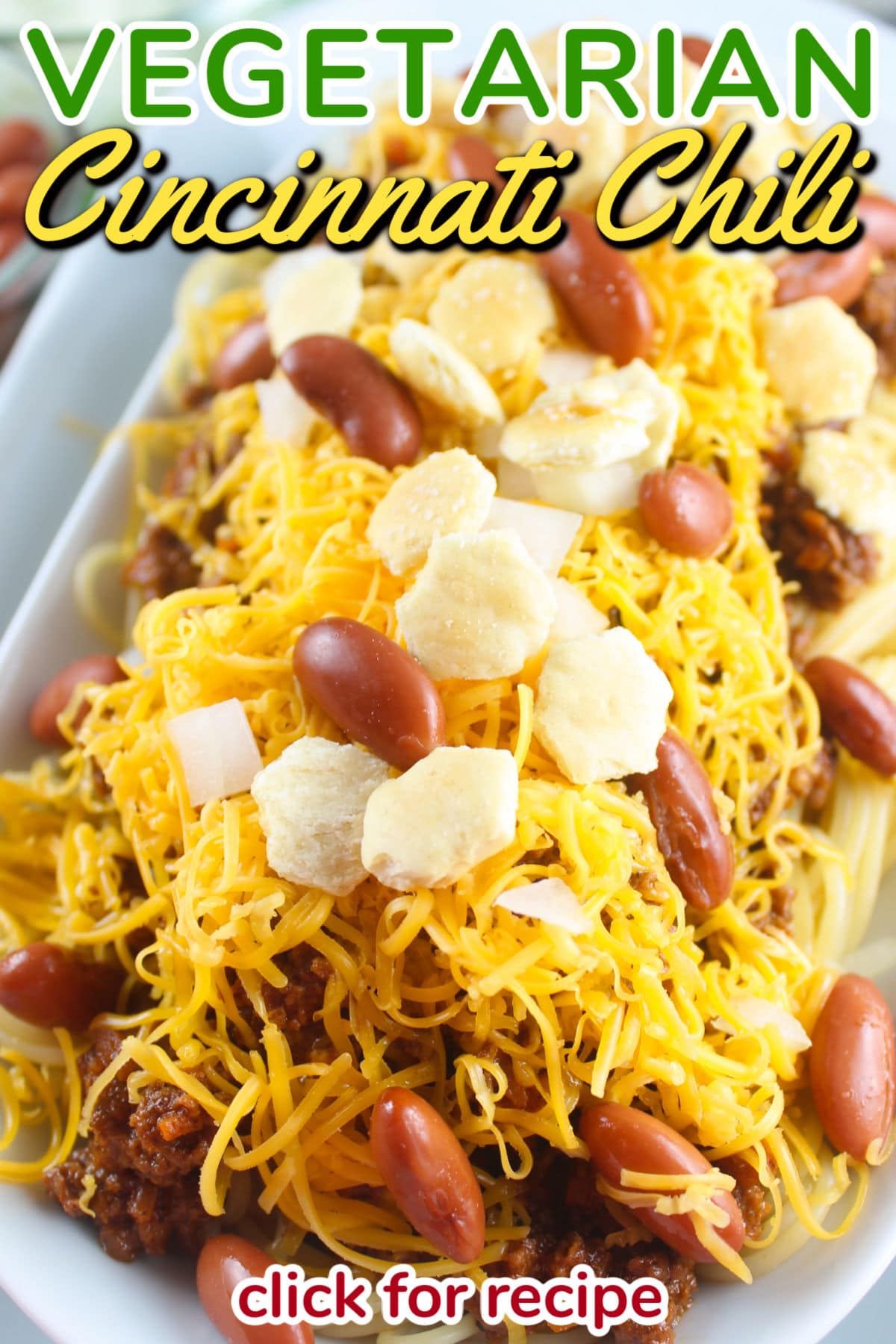 Vegetarian Cincinnati Chili has become a lot easier in this world where plant-based proteins are so much more prevalent. This recipe for a vegetarian version of Cincinnati chili also has some added veggies and a little spice for kick! No worries though – we didn’t lose any of the CHEESE!

For this Vegetarian Cincinnati Chili I used the Impossible Plant-Based Meat – they sent me a couple of packages a while back so this was a perfect excuse to try it. Color me IMPRESSED! I also added carrots to bolster up the veggie side of the recipe. You could even add more veg like mushrooms and peppers.

How do you make vegetarian Cincinnati chili?

For this recipe, it’s the same as you would for the copycat Cincinnati chili I made earlier this year. It really is SIMPLE! Start with water in a large pot (that you would make pasta in – high sided pan) then you add the Impossible meat and carrots. The water will cook the meat & veggies. I let that cook for about five minutes and use a meat chopper to break up the plant-based “hamburger”. After five minutes, add all your seasonings and let simmer for an hour. THAT’S IT!

I did find that this vegetarian version needs more water – you want to cook it down – but it still needs to be a “runny” chili. After it’s ready – you can eat it on top of spaghetti and top it with shredded cheddar, kidney beans and diced onions (for the true 5-way experience!).

Can you make vegetarian Cincinnati chili in a slow cooker?

Yes – it’s exactly the same in a slow cooker – just cook it longer! On the stove top – it’s cooked down and ready in about an hour of simmering. Vegetarian Cincinnati chili in a slow cooker would just take 2-3 hours on low to be ready to go! I wouldn’t crank it on high as it will probably dry up too quickly.

Yes! I have to say – it’s all about the seasonings. And if you’re a Cinci-native and really like one brand over another and want an even more authentic taste – you can buy the seasoning packets online very easily!

I was most surprised at how much like “meat” the Impossible plant-based meat was! It looked just like hamburger as it was cooking and definitely had a meaty texture. I think that if you ate them side-by-side – you could obviously tell – but if you’re trying to incorporate more plant-based foods into your life – then these are definitely a good alternative. I’m not making hamburgers out of it anytime soon – but I liked it.

Just fyi – I was not compensated in any way for this post. They did send me a couple packages free to try – but this is 100% Food Hussy opinion!

Vegetarian Cincinnati Chili has become a lot easier in this world where plant-based proteins are so much more prevalent. This recipe for a vegetarian version of Cincinnati chili also has some added veggies and a little spice for kick! No worries though – we didn't lose any of the CHEESE!
5 from 6 votes
Print Recipe Pin Recipe
Prep Time 5 mins
Cook Time 1 hr 10 mins
Course Entree
Cuisine American
Servings 6
Calories 113 kcal