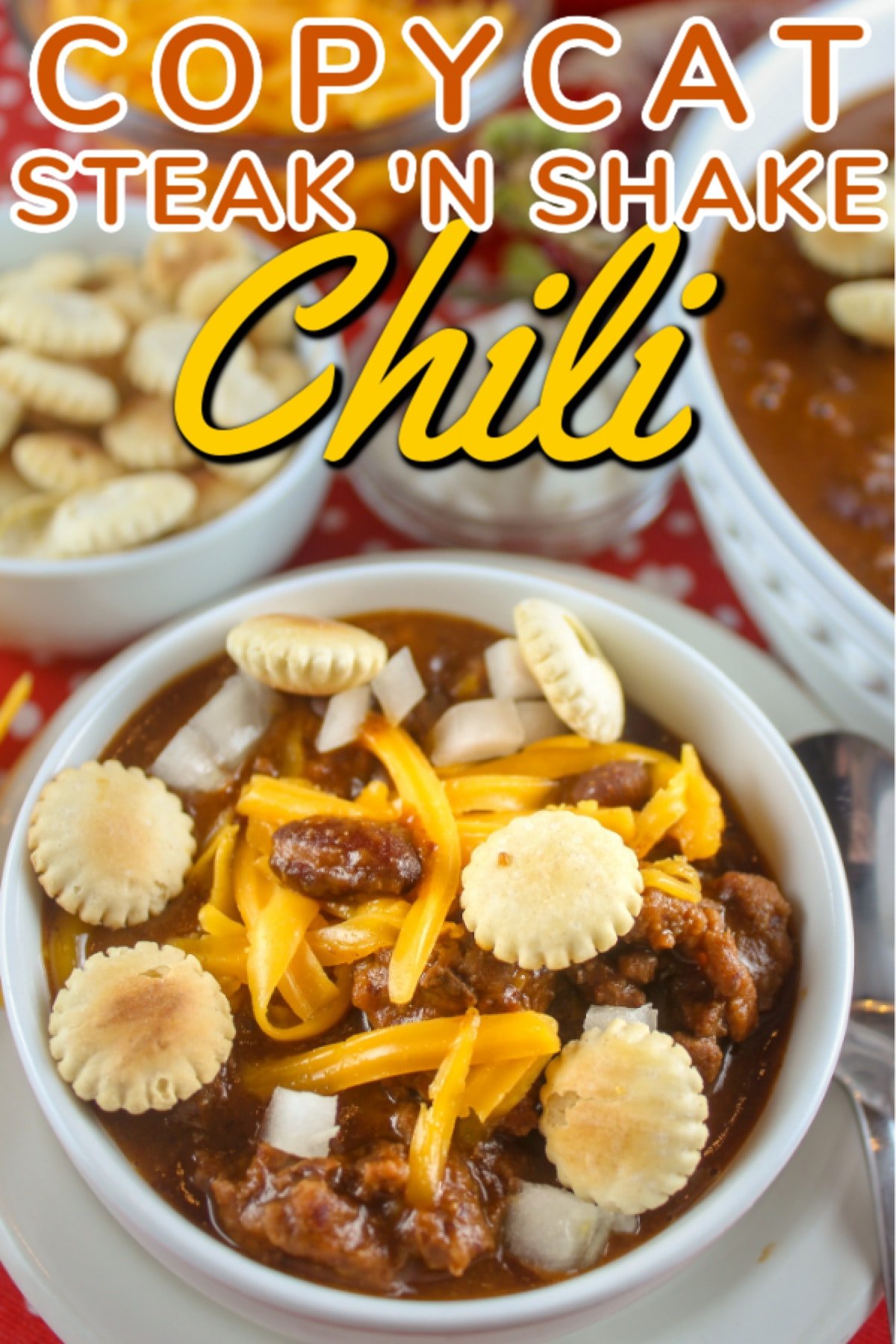 Steak ‘N Shake chili is my all-time favorite restaurant chili! It’s got a really specific THICK texture – almost a sauce – that is unlike any other. And – after three tries – I FIGURED IT OUT!! I finally made the perfect Copycat Steak ‘n Shake chili!

The texture was the unique thing about Steak ‘n Shake chili that I loved and why it was so hard to replicate – but the key is in the beans! I can’t wait to share this secret with you! It’s so easy too! You’ll also want to make sure and have your favorite toppings on the side like diced onion, grated cheese and oyster crackers.

I have a lot of great memories of Steak ‘N Shake. Once a year, we would drive to the Quad Cities to go school shopping and that would be our treat lunch. We were poor – so it was a day my Dad saved up for every year.

More recently, quite a few of the Cincinnati-area Steak ‘n Shakes have closed – leaving me worried I wouldn’t be able to get that awesome chili! I bought six cans of the chili so I would have ample tasting opportunities.

How do you make Steak ‘n Shake chili?

It’s a fairly “normal” chili recipe – with a couple of differences. First off – there’s very little tomato – just a small can of tomato sauce. Second- it’s a double down on the BEANS! Here’s how you make it:

First, brown the ground beef in a dutch oven-style pan (high sides). While that’s browning, you’ll take a can of French onion soup (not mix – the actual can of soup) and 1/2 can of the kidney beans and put them IN THE BLENDER! Yes – the blender. Boom! Mind. Blown.

Once the hamburger is browned, add the soup & bean puree, the rest of the beans and all of the remaining ingredients to the pot. Bring to a simmer and turn heat to lowest setting and simmer for an hour.

Finally top the chili with diced onion, shredded cheese and oyster crackers for an authentic Steak ‘n Shake experience. You can also serve it on Spaghetti for a Steak ‘n Shake 3-way!

Does Steak n Shake chili have beans in it?

Yes. Doubled down actually! This was the key to the texture. I knew it was a thick texture but it wasn’t tomato-based. That’s also the key to the color – it’s lighter than regular chili.

The first time I made the chili, I started with a copycat recipe I found online. It was not even REMOTELY like Steak ‘n Shake chili! But it was a place to start. From there – I kept tasting the canned chili realized there was a “sauce” and then it hit me! I took some of the beans out of my first batch and put them in the blender and voila – that was it!

I actually don’t even own a “real” blender – just one of those little pulsing smoothie blenders – but it worked perfectly!

Steak ‘n Shake serves a 3-way with their chili on spaghetti and you might think – hmmmm is it like Cincinnati chili? Nope. It’s not. I will say – it has some of the same ingredients – but they aren’t really similar flavors. Steak ‘n Shake has much more traditional chili flavors. I guess if you have Wendy’s on one end of the scale and Skyline on the other end – this would be in the middle.

What to serve with Copycat Steak ‘n Shake Chili? 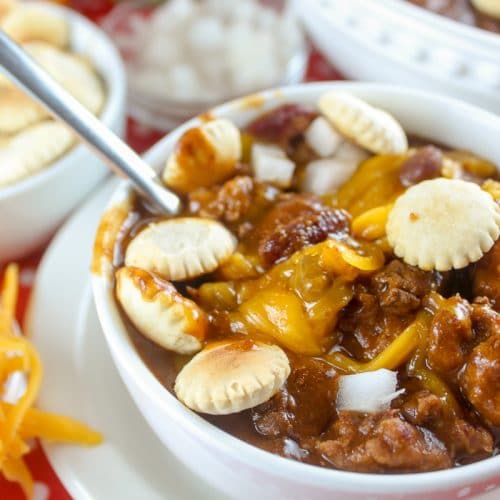 Steak 'N Shake chili is my all-time favorite restaurant chili! It's got a really specific THICK texture – almost a sauce – that is unlike any other. And – after three tries – I FIGURED IT OUT!! I finally made a copycat recipe that is identical to Steak 'N Shakes chili!
4.22 from 56 votes
Print Recipe Pin Recipe
Cook Time 1 hr 15 mins
Total Time 1 hr 15 mins
Course Entree
Cuisine American
Servings 6