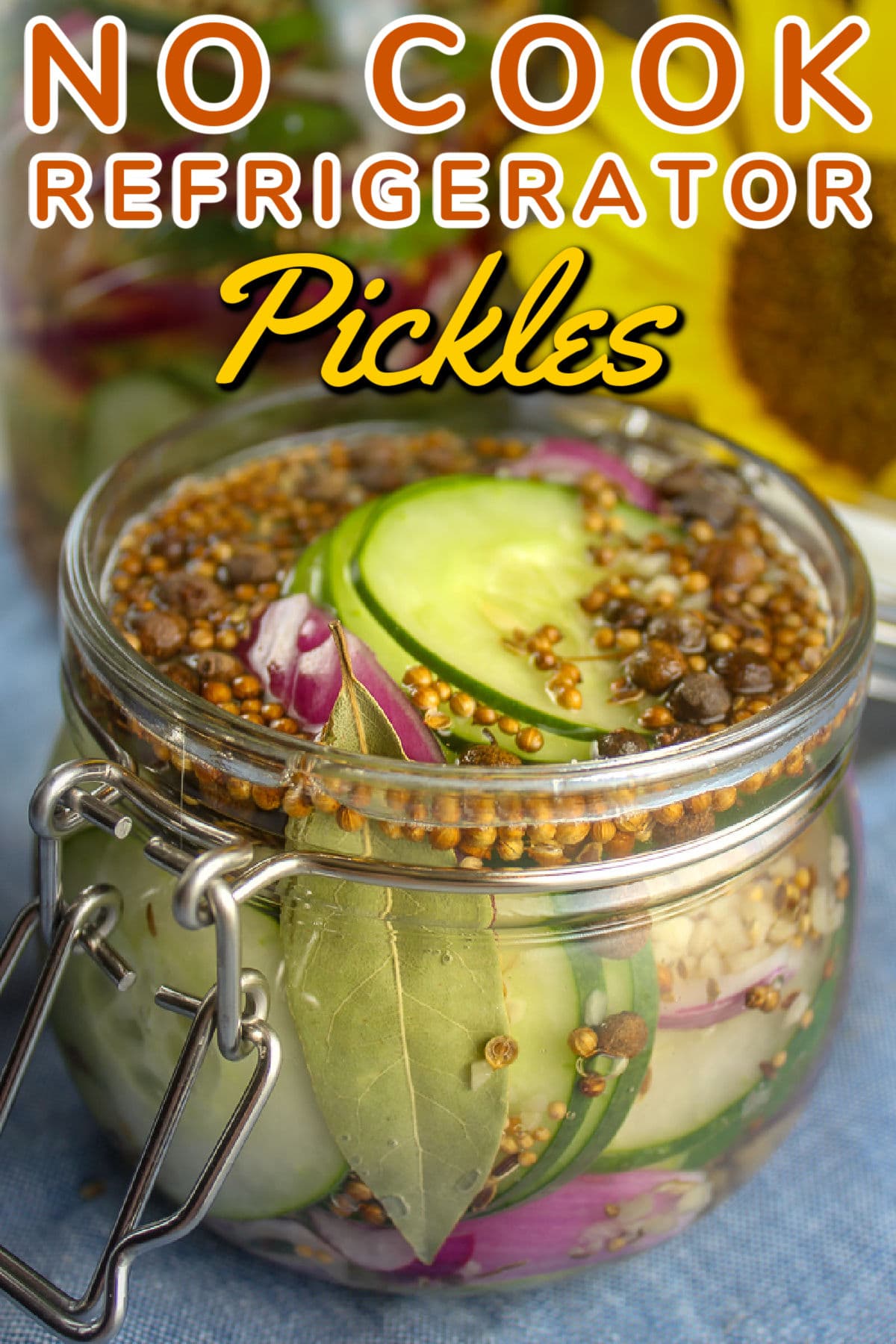 The best thing about these pickles is there’s no canning, no heating anything – just sliced your veggies, shove them in a jar and pour everything together – that’s it! They last for two months in the fridge!!! (Well – they won’t make it that long because I’ll eat them all first!)

How do you make no-cook refrigerator pickles?

It’s so simple to make fridge pickles! First slice up your cucumbers and onions. You can use any kind of onion – but I used red onions. I like to slice them fairly thin – they pickle quicker. Then grab a plastic bowl with a lid, mason jars – heck – any air tight container! Stuff all the cucumber and onions slices in and then sprinkle your pickling spices in. You can buy a packet of pickling spices or make your own – it’s so simple! Then pour your container about 2/3 with vinegar (cider or white) and 1/3 with water. Seal the container, shake and refrigerate!!!

When are refrigerator pickles ready to eat?

How long do refrigerator pickles last?

Refrigerator pickles will last up to two months in the fridge although they may not be quite as crunchy by then. i made three jars and have one gone already!

How many cucumbers should you use? What kind?

The nice thing about these fridge pickles is you can make as much or as little as you like! I had a couple girlfriends over for craft day and we made approx. 4 quarts with probably 6-7 cucumbers. Also – we used a mix of “pickling” cucumbers and regular ones – we just kept slicing until they were all sliced and divied up in the jars. We sliced up two red onions into rings and then into smaller pieces. But if you only have a couple of cucumbers you can still do it! We did that all the time – just threw them in the bowl!

Can you reuse the pickling liquid?

When I was growing up – we did reuse it – but not for more than a month or so. If we were getting low and more cucumbers ripened – we would slice them up and throw them in – but then you need to let the fresh cucumbers soak for a couple days.

What can you use no-cook refrigerator pickles for?

I’ve been using these pickled onions and cucumbers on burgers, in tacos and just as a side to whatever I’m eating for lunch or dinner. The red onions are so delicious! 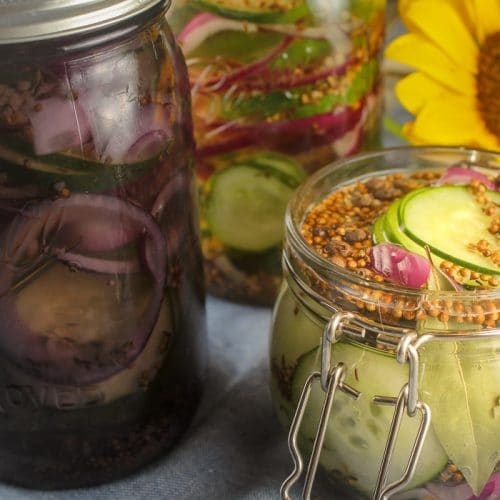 My Dad used to make no cook refrigerator pickles all summer long with cucumbers and onions from the garden and this year, in honor of his passing, I decided to make them for myself! His recipe was pretty much vinegar, water, cucumbers and onions with a few seasonings – but I jazzed it up to make it my own.
5 from 1 vote
Print Recipe Pin Recipe
Prep Time 15 mins
Cook Time 0 mins
2 d
Total Time 2 d 15 mins
Course Side
Cuisine American

This is for one quart jar – multiply for the # of cucumbers or jars you have!